Admitting you were an Inter fan growing up is probably not the best way to regain the trust of the AC Milan supporters when you are already under pressure, but Marco Giampaolo admitted his support for his side’s cross-city rivals in an interview before his final match against Genoa.

Since joining the club this summer from Sampdoria, Marco Giampaolo ultimately was the first Serie A manager to lose his job after a rocky start to the season, and in this tactical analysis scout report, I’ll take a look at why Giampaolo failed at AC Milan.

Typically, Giampaolo set AC Milan up in a 4-4-2 diamond, but this shape varied. Against Brescia and Hellas Verona, he fielded the Rossoneri in a 4-3-2-1, favouring an extra attacking midfielder rather than a striker. In his final match against Genoa, he played a  4-3-3.

Defensively, AC Milan’s shape would stay narrow, the two outer central midfielders position themselves in the half-spaces, the defensive midfielder screening the defensive line, while the attacking midfielder acts as the midfield’s first line of defence, attempting to cut out any central passing lanes. 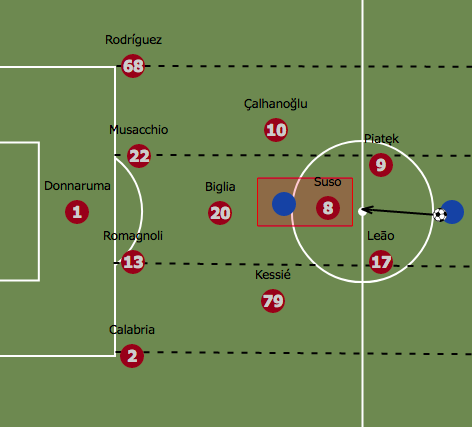 When the opponent had the ball on either wing the entire defensive shape would shift to that side – this movement, combined with the diamond’s natural narrowness, leaves AC Milan very susceptible to being stretched by opposing wingers who hug their touchline.