Home Analysis Transfer Analysis: What would the experienced Italian striker bring to the Fiorentina... 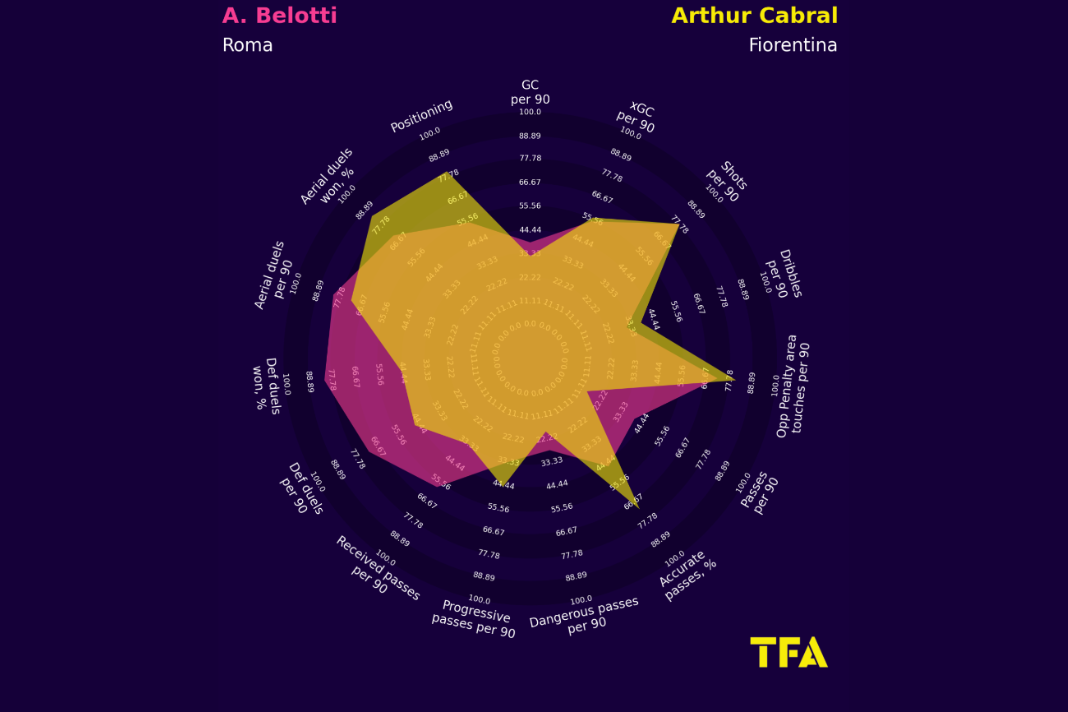 One player who has been one of the most underrated strikers in Serie A in the last half a dozen years is 29-year-old Italian Forward Andrea Belotti. Belotti made his dream move to play for a top club when Jose Mourinho’s Roma side signed him for a free transfer in the summer’s transfer window. He has been struggling with injuries and has been unable to give his best for his new club. Belotti has scored zero goals in the current Serie A campaign. The Roma striker is still seeking the space he hoped for upon his arrival in the city, and depending on how the season goes, he may contemplate shifting clubs. Fiorentina are looking to sign Belotti in the current or summer transfer window. We will now look at some stats that show why Serie A club Fiorentina wants to sign the forward. 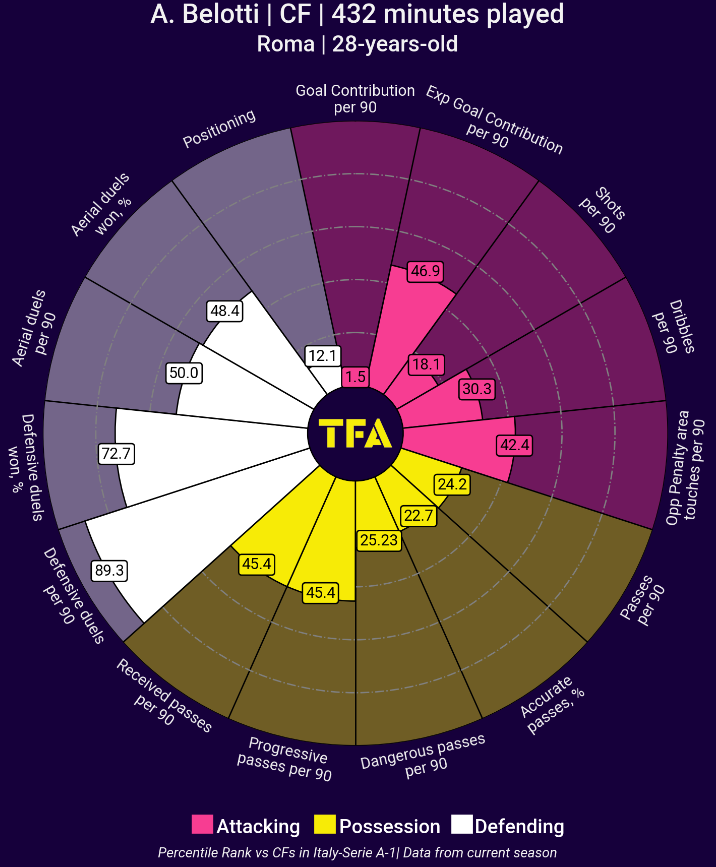 Jose Mourinho considers Andrea Belotti a vital part of the current Roma side, but he has been unable to get his scoring touch for his new club. The above viz shows the stats of the player in comparison to the other players featured as centre-forwards in Serie A this season. Andrea Belotti has been unable to get numbers on the board this season. He is below average in almost every stat. The Italian forward dominates defensive duels, winning 90 per cent of them.

Belotti in-front of the goal 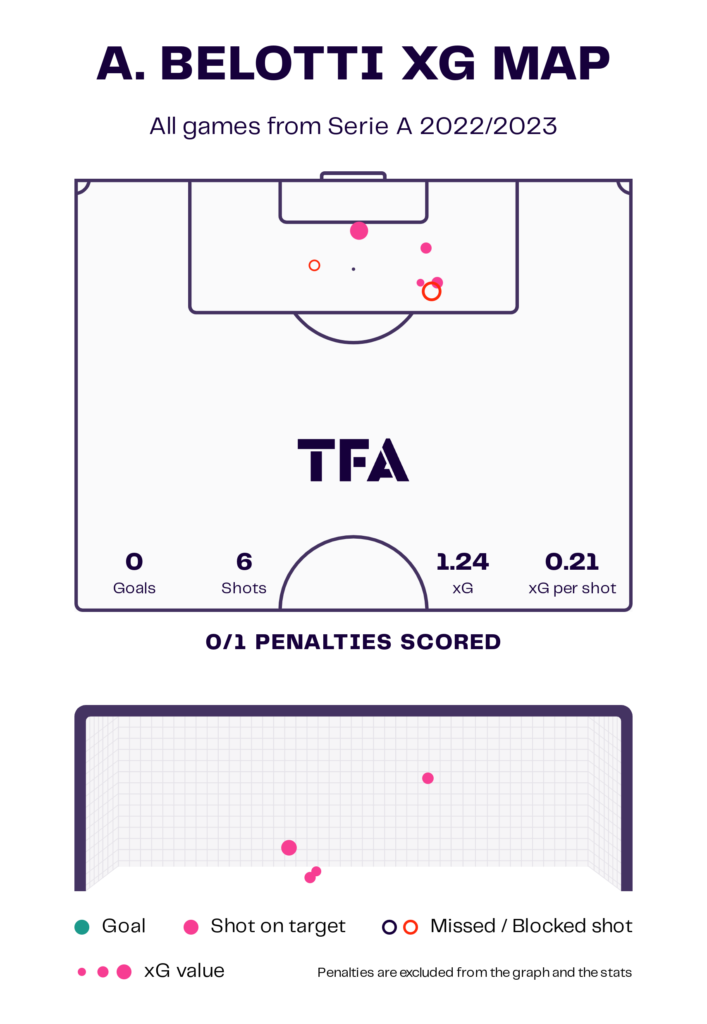 Andrea Belotti has scored zero goals in his 13 Serie A appearances. The above viz shows the shot map of the forward in the Italian Serie A. Belotti has also missed a penalty this season. He averages 1.43 shots per 90 minutes. Like a proper striker, Belotti has taken most of his shot attempts from inside the penalty area. He has taken seven shots so far this season, with a shooting accuracy rate of 57.1%. Belotti’s xG per 90 minutes is 0.41, and his xG per shot is 0.21. 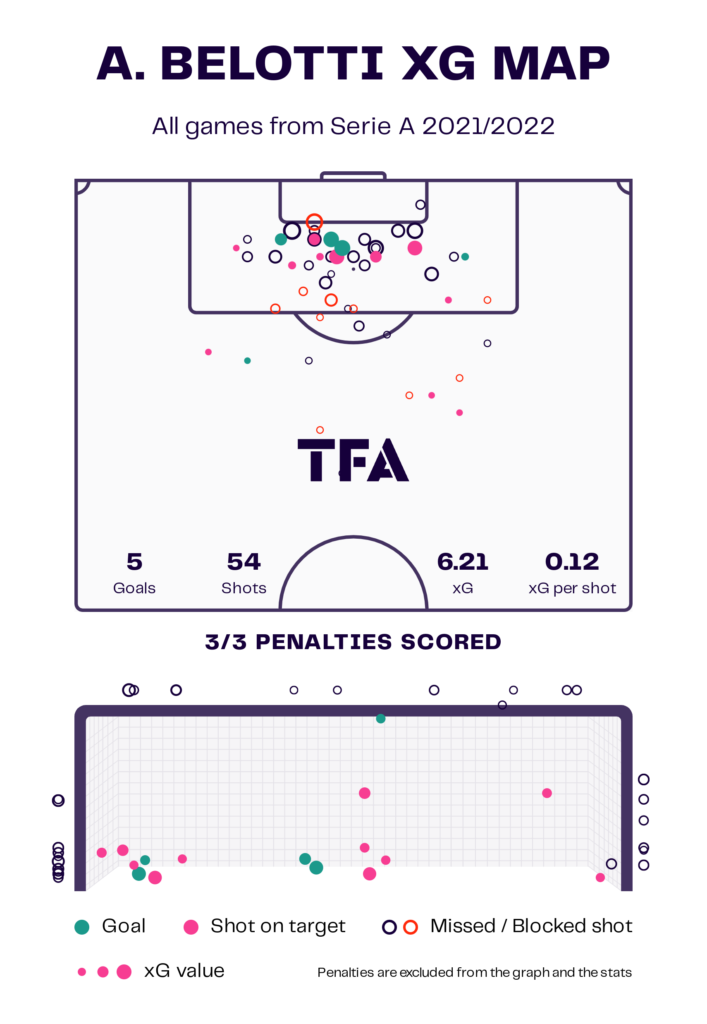 Andrea Belotti scored eight goals and provided one assist for the Torino side in the 2021–22 Serie A season. His goal involvement per 90 minutes was 0.52. Belotti had a non-penalty xG per 90 minutes of 0.29 and a total non-penalty xG of 6.21 last season. He had taken 57 shots in the 22 Serie A games and had a shooting accuracy rate of 33.3%. He scored a goal after every seven shots he took and had 3.49 shot attempts per 90 minutes. 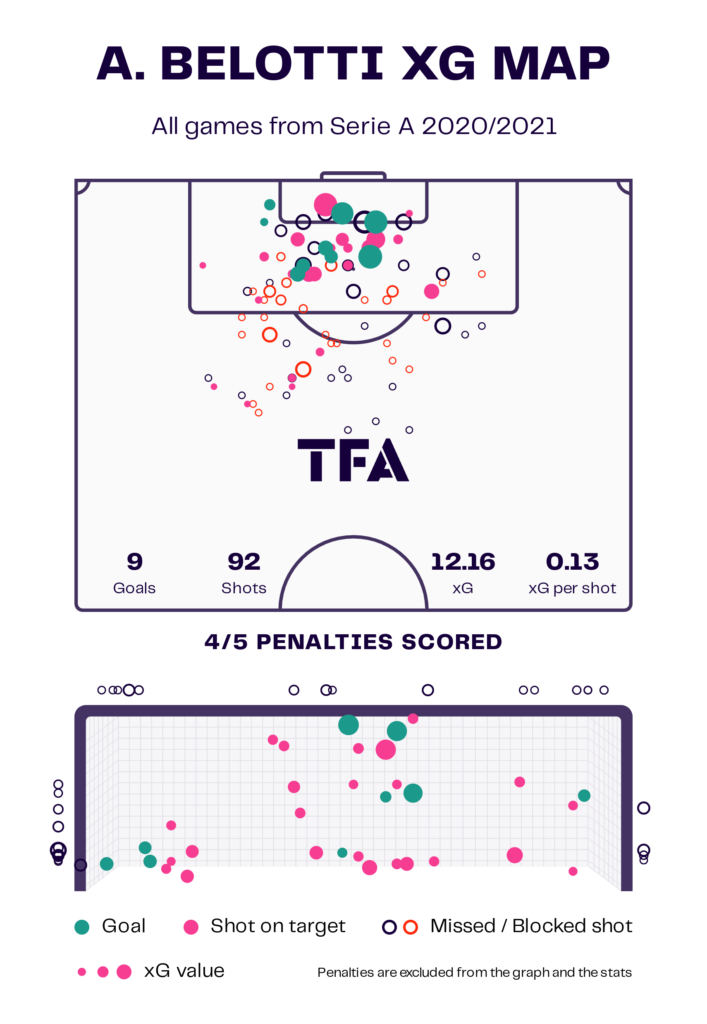 Andrea Belotti scored 13 goals and provided six assists for the Torino side in the 2020–21 Serie A season. His goal involvement per 90 minutes was 0.59. Belotti had a non-penalty xG per 90 minutes of 0.23 and a total non-penalty xG of 12.16 during that season. He had taken 97 shots in the 35 Serie A games and had a shooting accuracy rate of 39.2%. He scored a goal after every seven shots he took and had 2.83 shot attempts per 90 minutes.

Whom would Belotti replace? 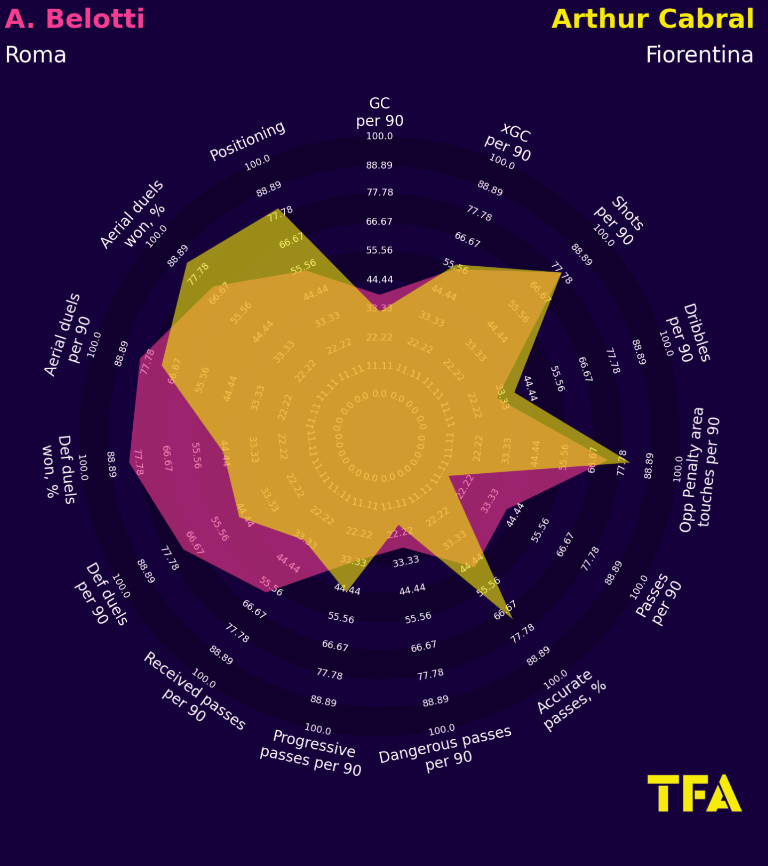 Andrea Belotti might replace the 24 years old Brazilian forward Arthur Cabral as a squad player and a starting position for Fiorentina’s attack. Both players outperform each other in a few stats. Belotti surpasses Cabral in passes per 90, received passes per 90, and defensive duels won (%). Belotti is an experienced forward and provides a different attacking dimension to this Fiorentina side that might force Fiorentina to play him ahead of Cabral if he moves to Fiorentina. Cabral has made 14 Serie A appearances, scored three goals, and provided one assist this season. Belotti has been unable to make an impact for his Roma side, scoring zero goals in his 13 Serie A appearances this season.

Fiorentina have been struggling in the attack this season, having scored only 21 goals in their 17 Serie A games. Andrea Belotti has also struggled for his new club Roma in the current season and is yet to open his goalscoring tally in the current Serie A season. Belotti is a player that fits perfectly into the current Fiorentina side because of his experience, finishing, and good aerial skills as a forward. Belotti will provide the much-needed attacking depth required in the current Fiorentina side, as he can play as a striker. He will be looking to get back to his best and prove that he is still one of the best Serie A strikers, so the Belotti signing makes sense from Fiorentina’s perspective.

Transfer Analysis: From the capital to Naples? Napoli keen to sign...