Home Analysis Under the microscope: Can Roma’s defence lead them into a top-four finish? 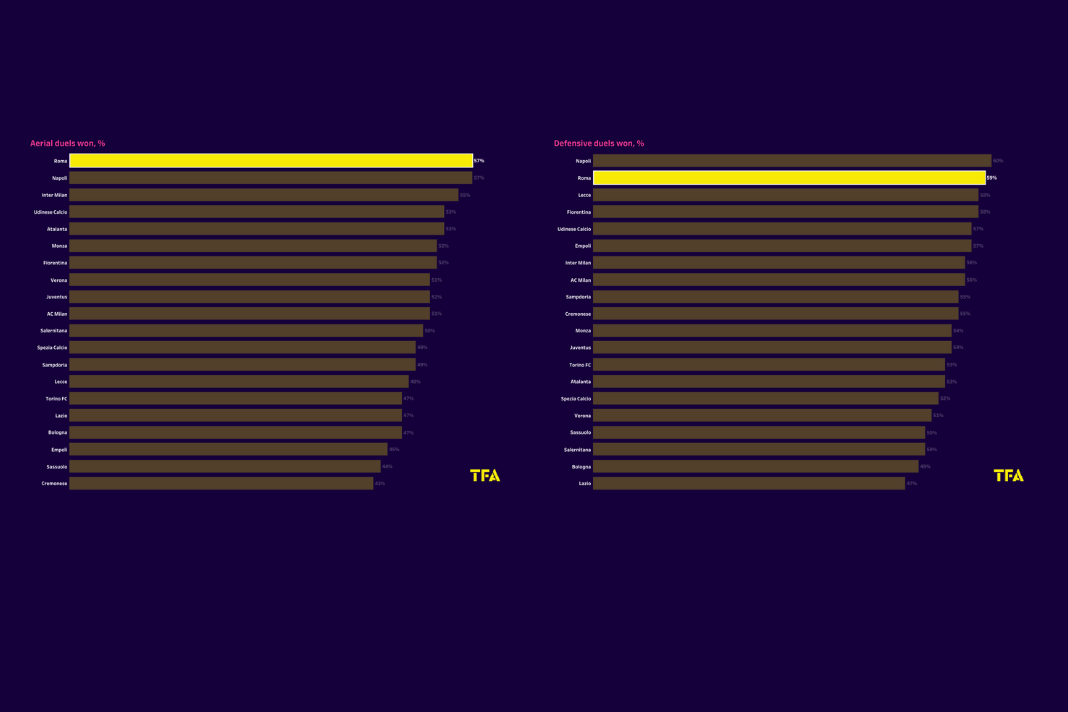 The Italian Serie A race for UEFA Champions League qualification is going neck-to-neck, as there is only a three-point difference between fourth-place Lazio and seventh-placed Roma. One of the teams that has started the season well is Jose Mourinho’s Roma, which has come as a surprise package in the fight for Champions League places. Roma was consistently in the top four positions during the season but fell to seventh place after getting inconsistent results since mid-September. They have won eight, drawn three, and lost four matches, all thanks to Jose Mourinho’s tactics. This start to the season has raised their hopes of finishing in the top four. We now look at some stats that show why Roma has a good chance of playing in the Champions League next season.

How has the capital side performed so far? 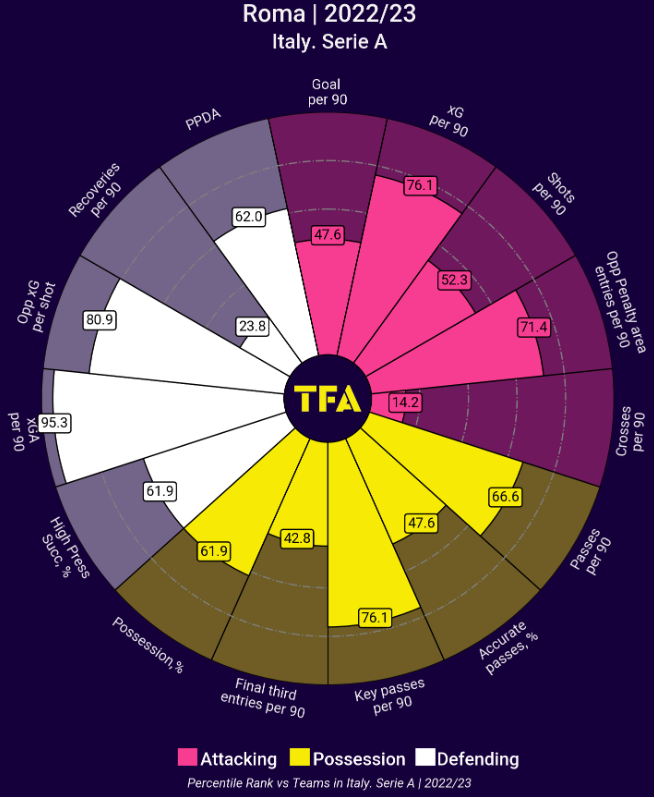 Roma has not won a Serie A game in the last three games, drawing twice and losing once against archrivals Lazio. Jose Mourinho’s team has scored only 18 goals in 15 matches this season and conceded 14 goals. The above viz shows the team’s percentile rank in attacking, defensive, and possession stats compared to other teams in Serie A. We can observe that the I Giallorossi have poorly performed in the attacking front, especially for shots per 90 and goals per 90. Roma needs to improve in all three game departments to qualify for the Champions League football next season. Roma has massively underperformed their expected goals this season by scoring just 16 goals from the 23.01 XG created by them, excluding penalties.

The I Giallorossi have scored 18 goals with an average of 1.2 goals per match, which is comparatively less than the other big Serie A clubs this season. The above viz shows the shot map of the team in the current season. It can be identified that most of the goals for Roma have come from inside the box. AS Roma players have already missed 36 big chances created in Serie A this season, with Tammy Abraham leading the stats. Jose Mourinho’s men average 12.3 shots per match. The xG is relatively high because Roma players have taken most of the shots from the dangerous area inside the 18-yard box. 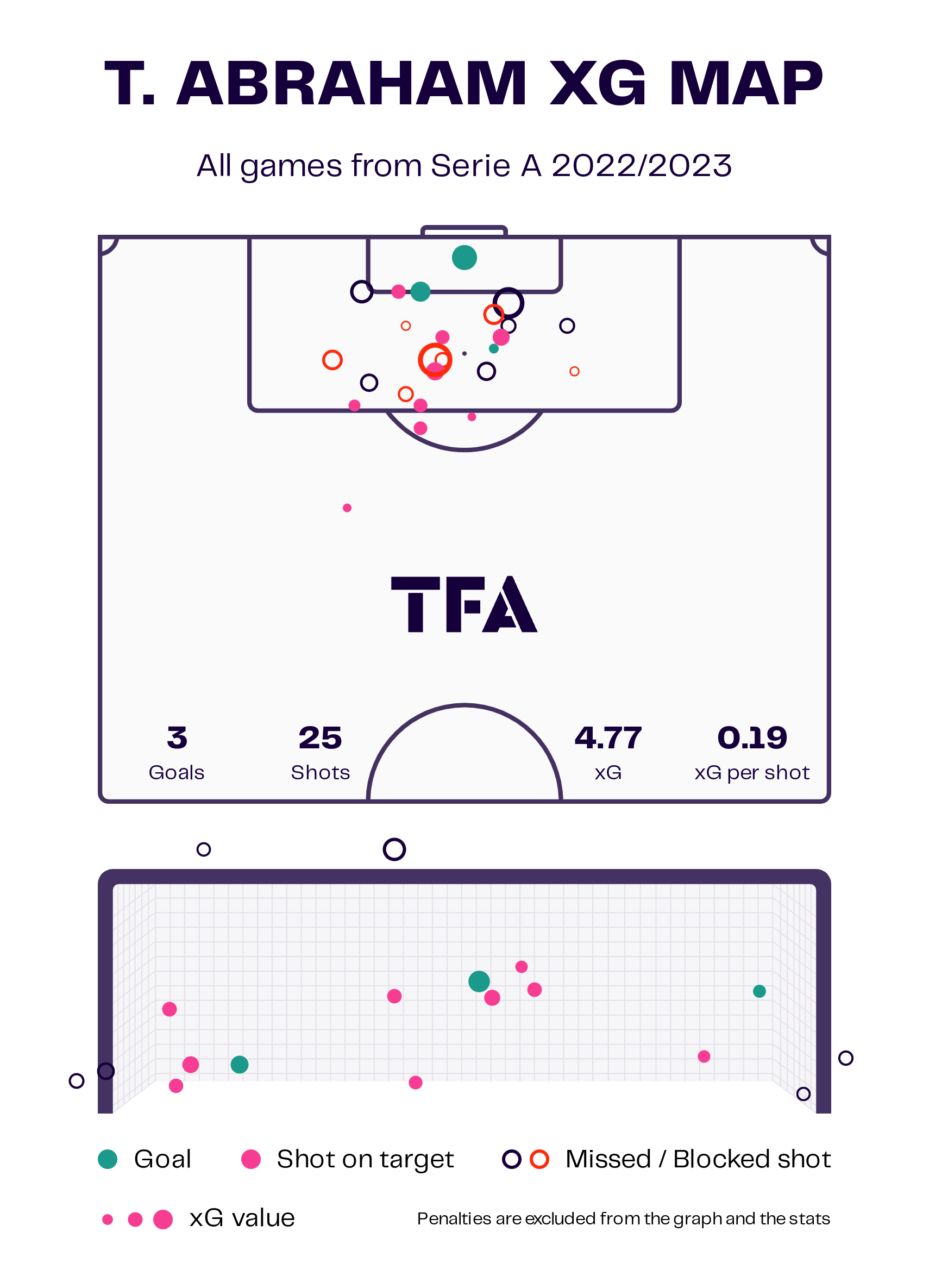 Tammy Abraham has been unable to find his golden scoring touch in the Serie A this season like the previous season. Tammy Abraham has a shot conversion rate of 8.6%, which is relatively low for any good central forward. The Englishman has only scored three goals and provided one assist in the 15 appearances so far this season in the Serie A; comparatively, he had scored 17 goals and provided four assists in the season. He has also missed ten big chances, which is one of the reasons why Roma haven’t scored enough goals till now this season. He needs to find his scoring touchback if the I Giallorossi needs to qualify for the Champions League next season. 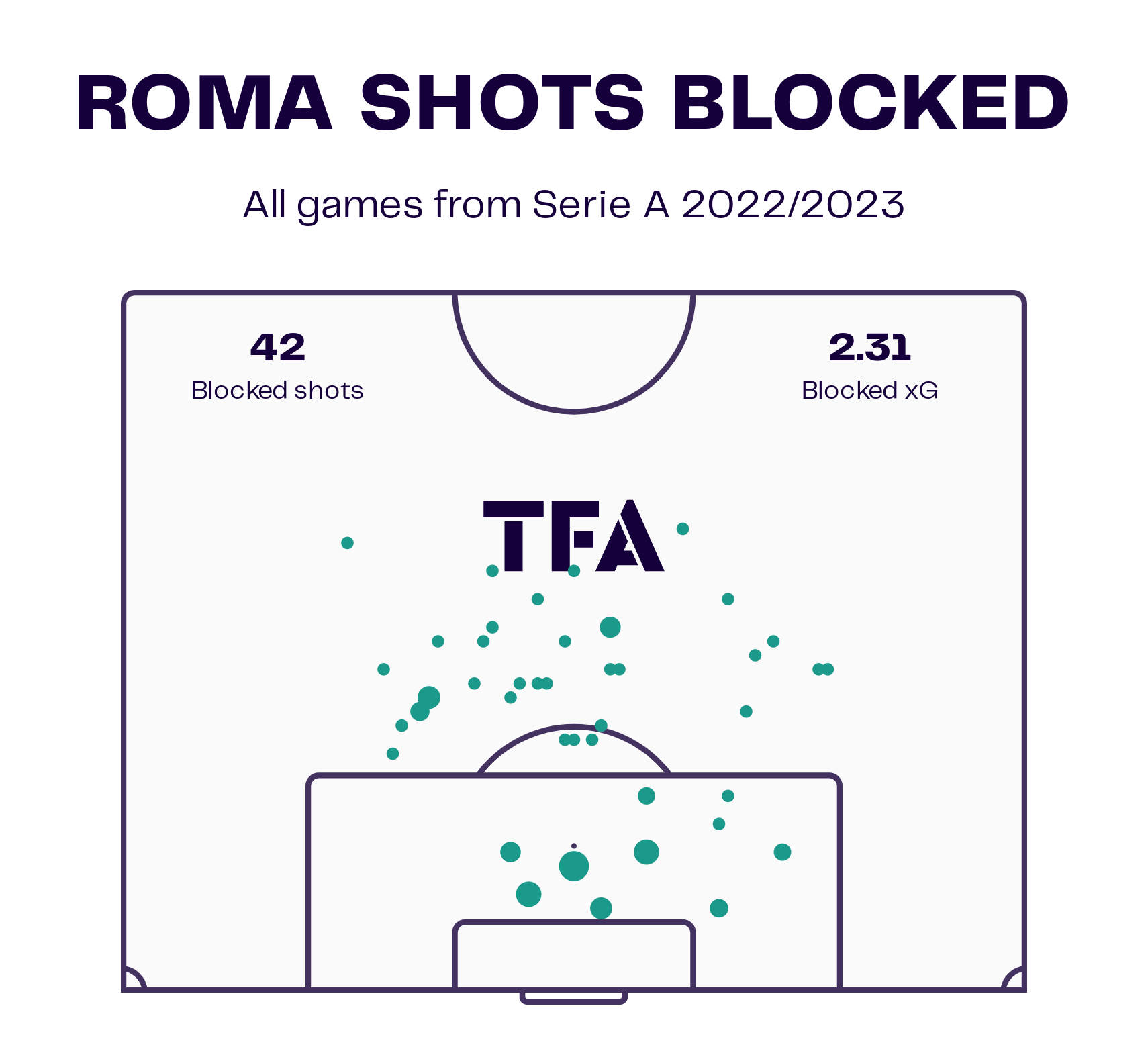 AS Roma’s defenders have put their bodies on the line and blocked 42 shots. These blocks have been crucial and were made inside their 18-yard box. One of the players who has been consistent at the back is their Brazilian defender, Roger Ibanez. He has made 2.5 tackles per game, 3.0 clearances per game, and 2.1 interceptions per game this season in 15 appearances. This shows the players’ assurance and commitment to returning Roma to glory under Jose Mourinho. 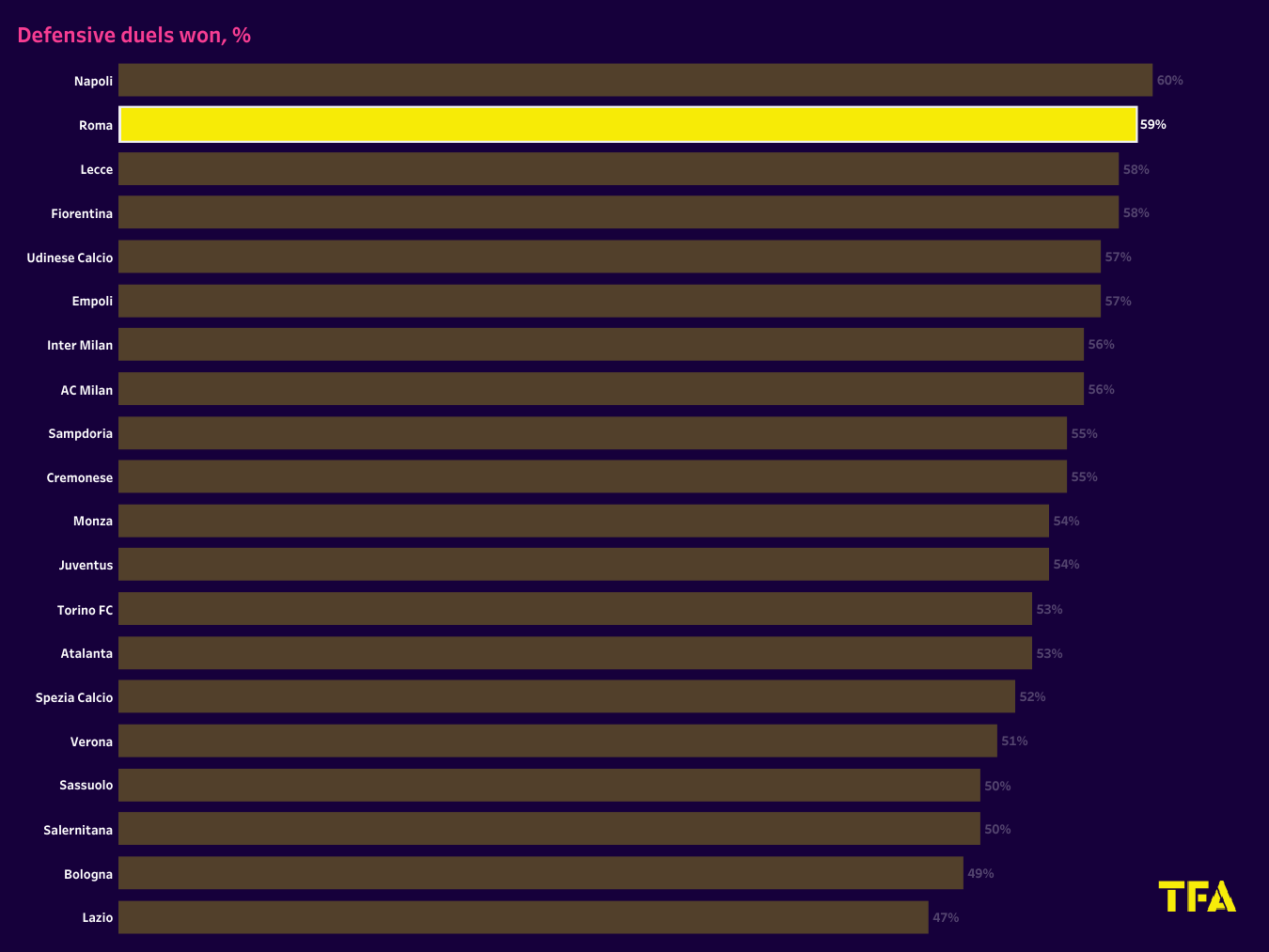 This season, Roma has the second-best defensive duels won percentage in the Serie A. The above viz shows the team’s percentile rank in defensive duels won percentage compared to other teams in Serie A. Roger Ibanez, the Brazilian defender, has won 95 duels this season and is ranked third overall among all the players in Serie A. The Italian midfielder Bryan Cristante has won 87 duels this season. 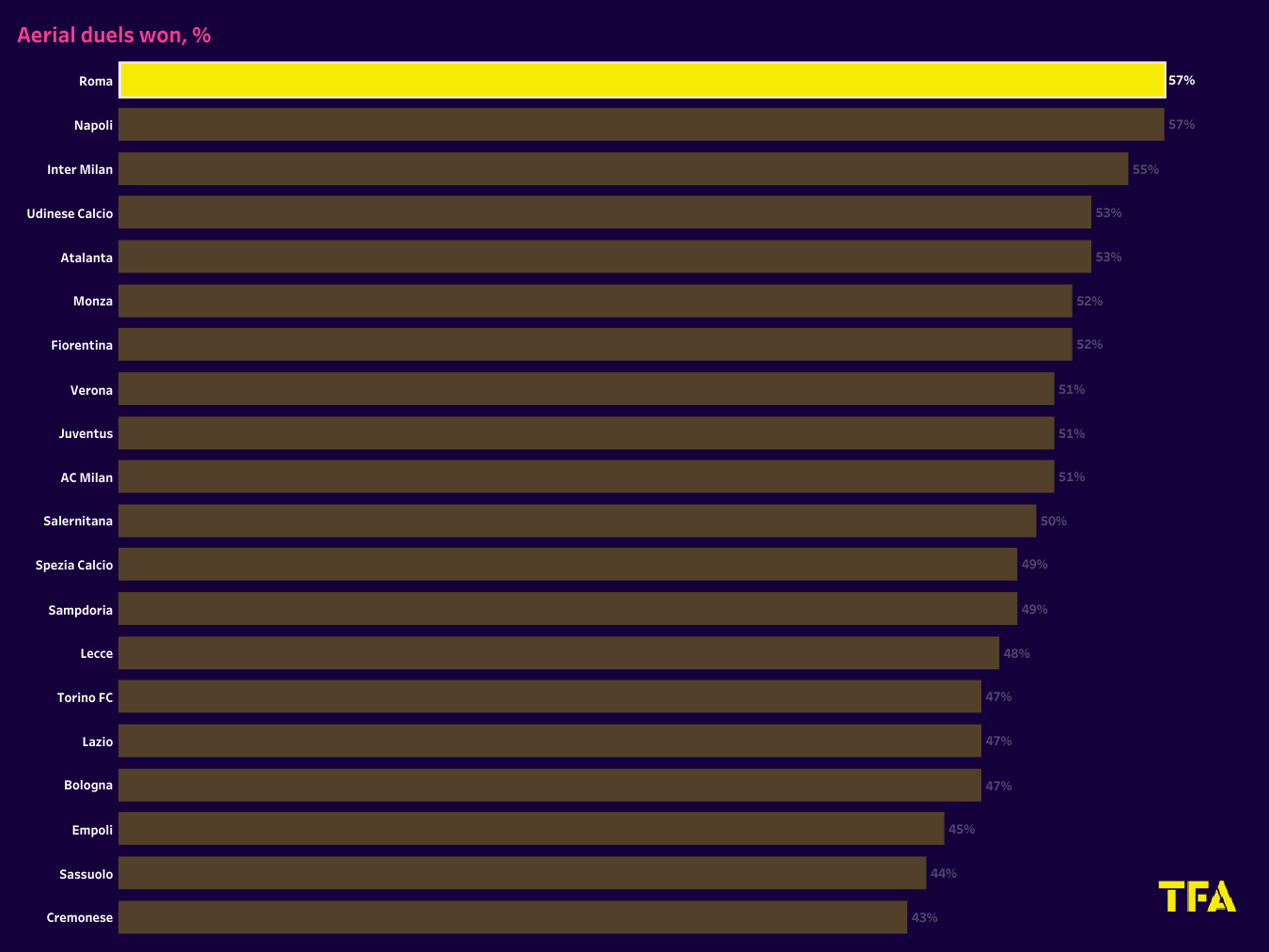 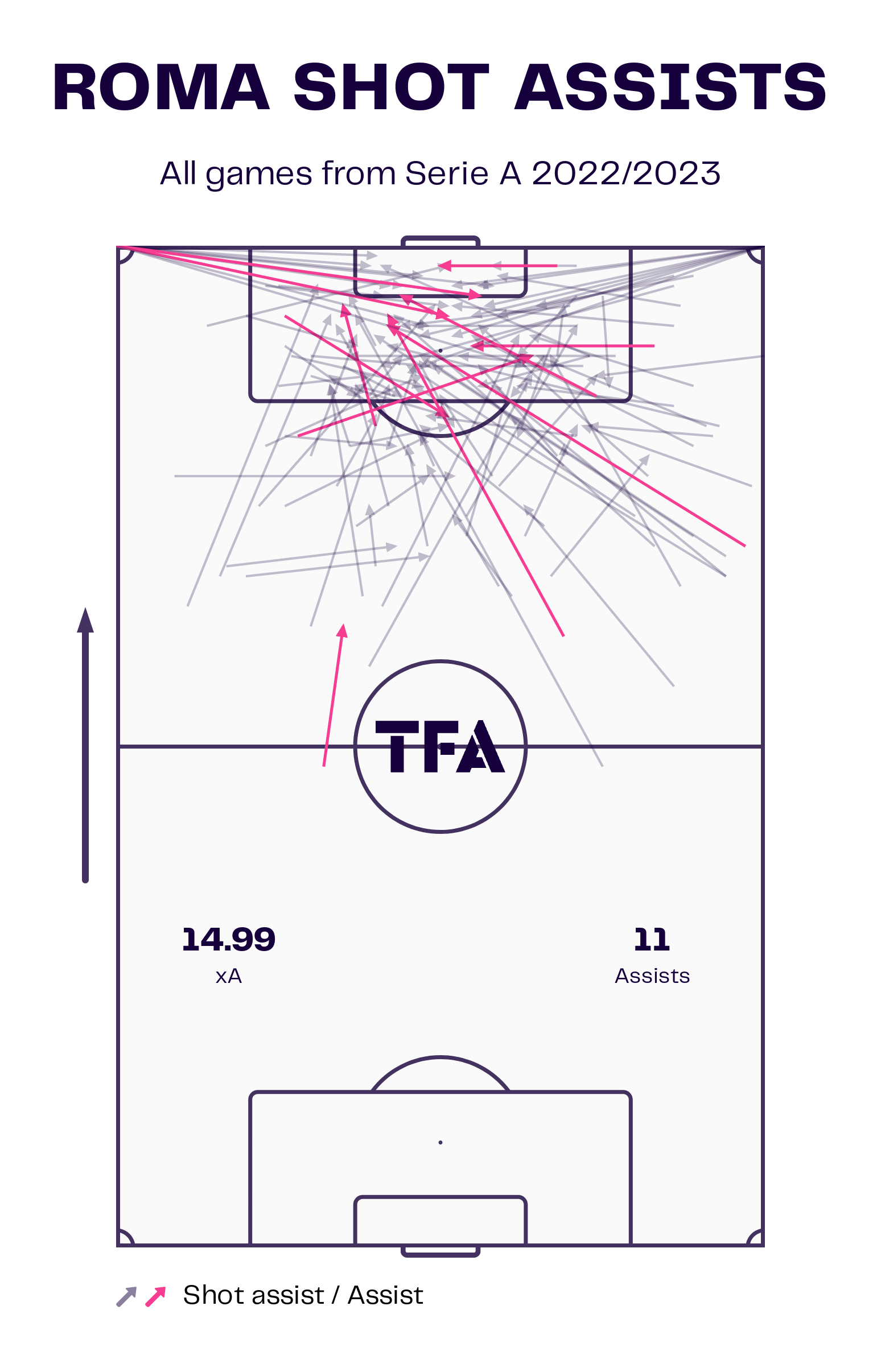 Lorenzo Pellegrini and Paulo Dybala have been the best players for the I Giallorossi this season from the midfield in Serie A. The duo has been leading the charts for AS Roma’s side in total assists, key passes, and big chances created. Dybala is the leading goal scorer for the team, while Lorenzo Pellegrini is the leading assist provider for Roma’s side this season in Serie A. 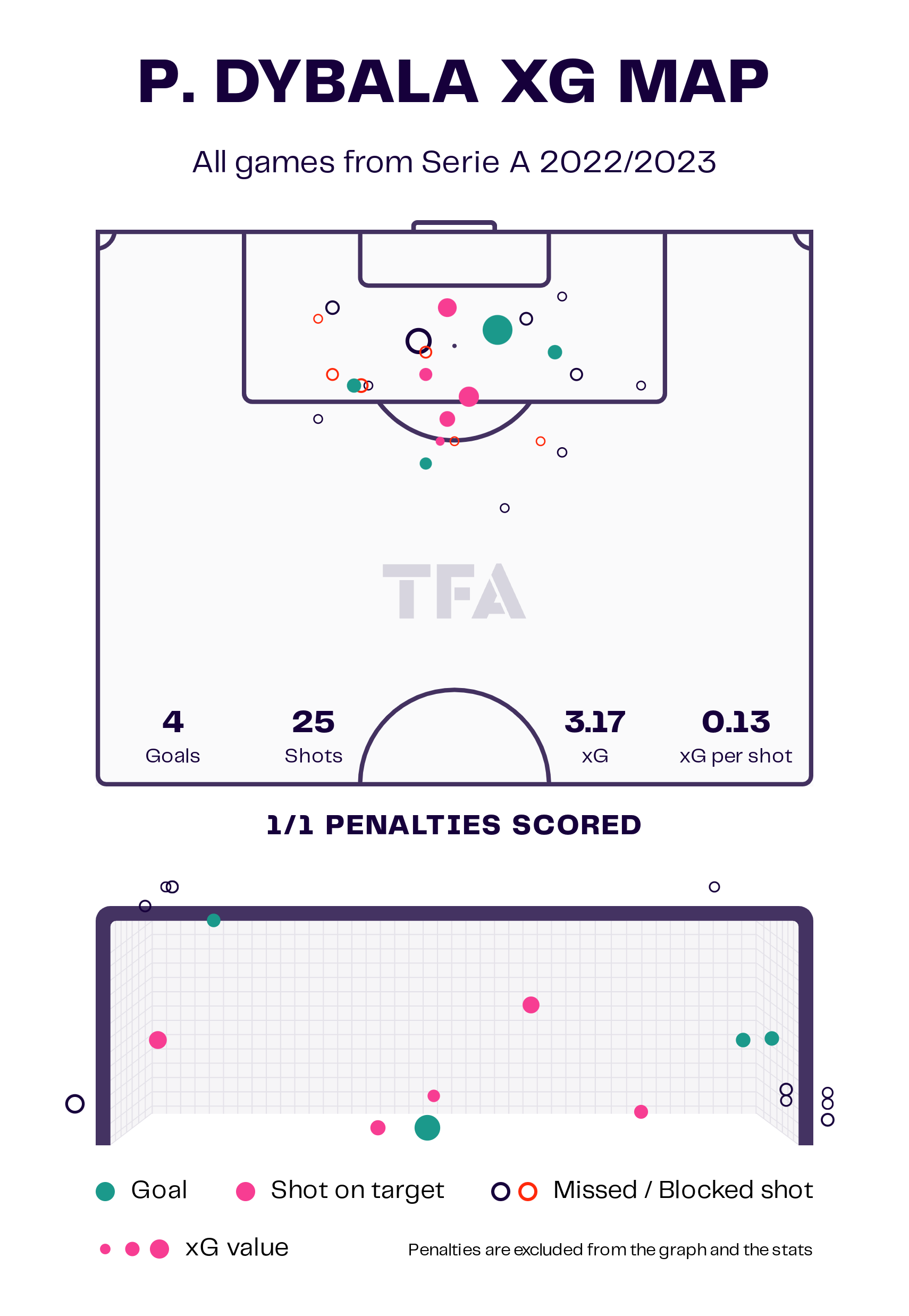 Paulo Dybala has found his golden touch back in the Serie A this season with his new club Roma, after having a few inconsistent seasons for his old club Juventus. Dybala has managed to score five goals for Roma. He likes to cut inside and attempt shots to score a goal with his strong left foot. The Argentine has attempted 25 shots this season and has an accuracy rate of 19.2. He has been the most crucial player in the attack for the Roma side.

Roma have been a pretty inconsistent side in the Serie A this season. The I Giallorossi have been one of the most unpredictable sides in the top five European Leagues this season. Roma’s defence is led by the experienced Englishman Chris Smalling and Roger Ibanez; meanwhile, Roma’s midfield and attack are steered by the duo of Lorenzo Pellegrini and Paulo Dybala. The biggest worry for this Roma side and Jose Mourinho is the out-of-form Tammy Abraham. Jose Mourinho will hope these players stay at the top of their game, perform consistently after the World Cup, and finish in the top four.

‘Perspective of a future’- Inter have to consider move for Tottenham...

The Statistics: A win for Argentina against Bolivia in the Copa...