Home Analysis Under the microscope: How Gasperini’s men’s away form has kept them in... 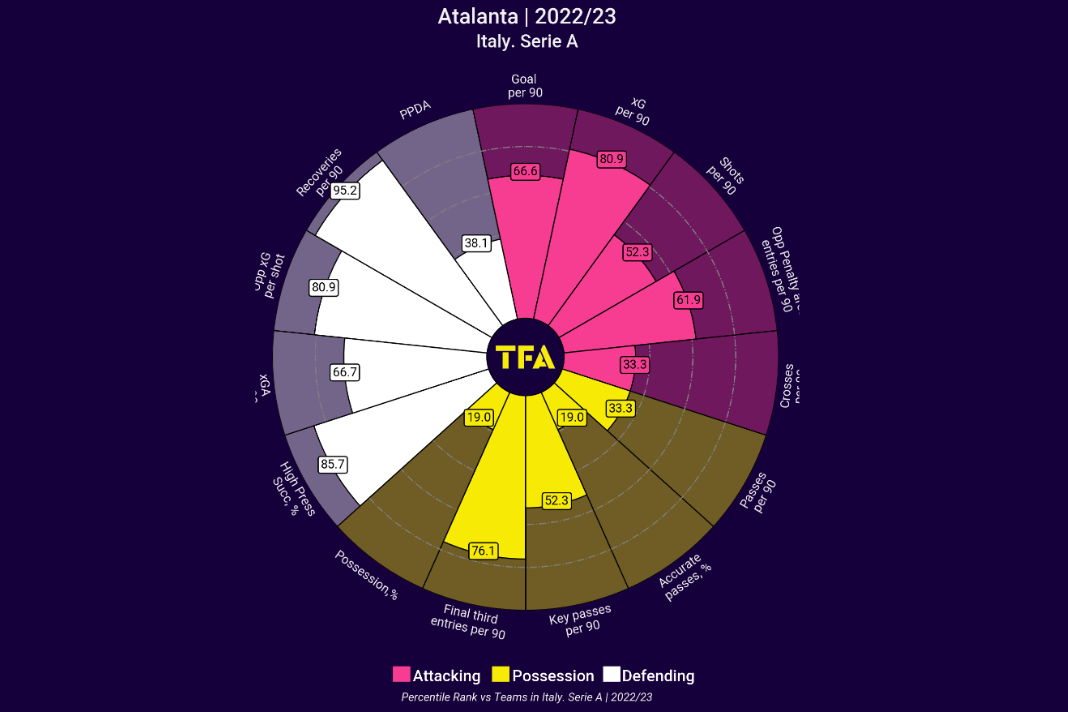 Only three points separate fourth-place Lazio and sixth-place Atalanta in the Serie A competition for the Champions League football. Gasperini’s Atalanta, which arrived as a surprise package for the race for Champions League spots, is one of the clubs that have begun the season impressively. One of the significant reasons behind Atalanta’s good start to the season has been their remarkable away form. Atalanta have 16 points from their seven away games and are the third-best away team in the current Serie A season. Atalanta has won five games, lost one game, and drawn one game away from home this season. We now look at some stats showing why Atalanta has performed impressively in away games. 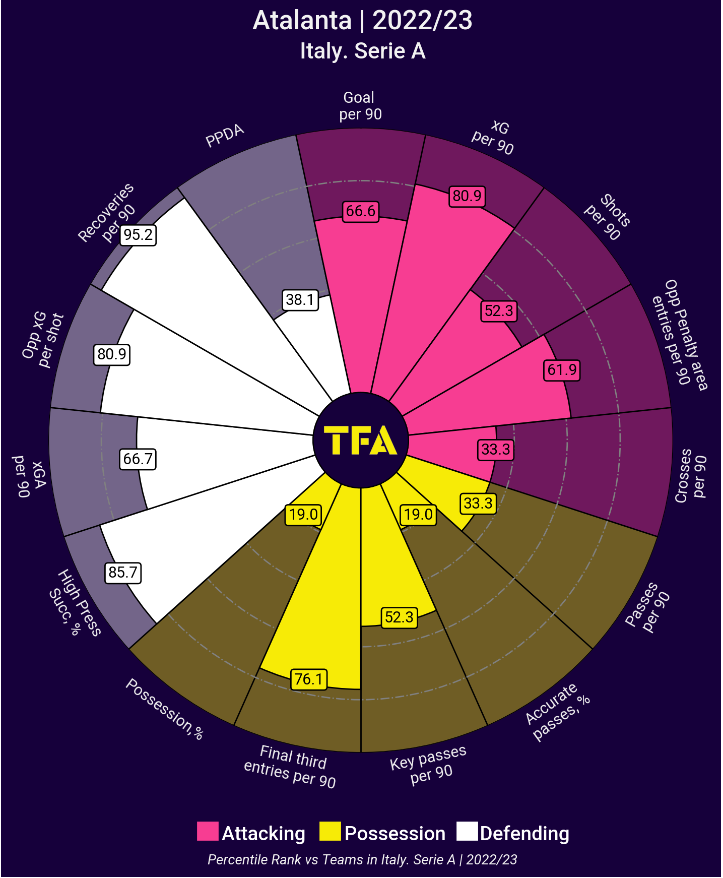 In the current Serie A season, Atalanta has dominated games away from home. Atalanta have scored 22 goals and conceded 15 in 15 Serie A games so far this season. Away from home, Atalanta have scored 11 goals and conceded just four in the seven games played this season. Atalanta have a win percentage of 71% in away games and a 38% win percentage in home games. The above viz shows the team’s percentile rank in attacking, defensive, and possession stats compared to other teams in the Italian Serie A. It can be observed that Atalanta are rated very highly for recoveries per 90. Other stats where the Atalanta side have done well are high press success rates, the opponent’s xG per shot, xG per 90, and final third entries per 90. 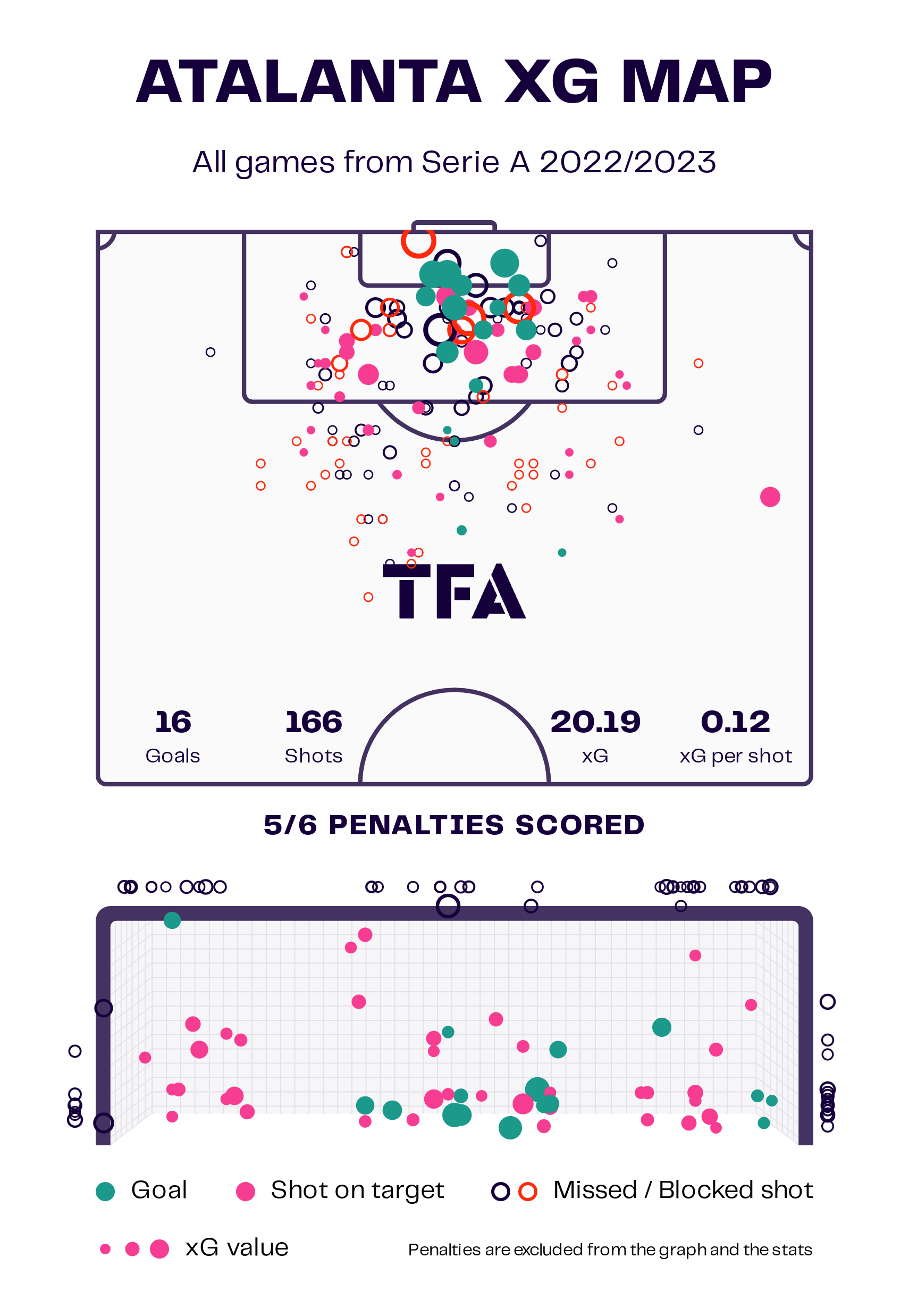 Atalanta have scored 22 goals with an average of 1.47 goals per match. The above viz depicts the team’s shot map for the current season. Out of the 22 goals scored by the Atalanta side, 11 have come away from home, averaging 1.57 goals per match. They have scored in all seven Serie A away games this season. During away games, the Atalanta side creates an xG of 1.56. The team averages 13.87 shots per game at home and 12.86 shots per game on the road. Atalanta players have a shot conversion rate of 12% in games away from home this season. 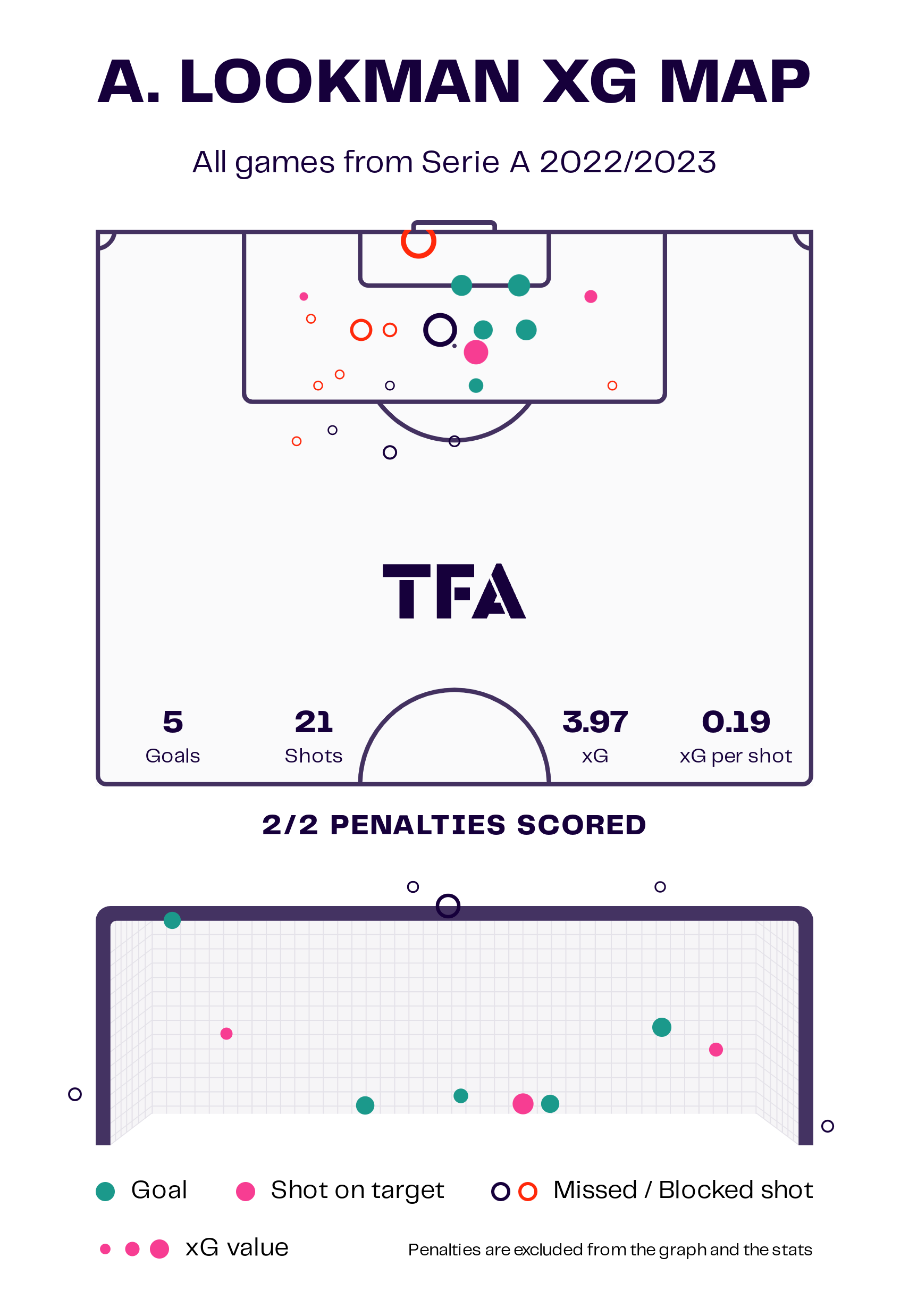 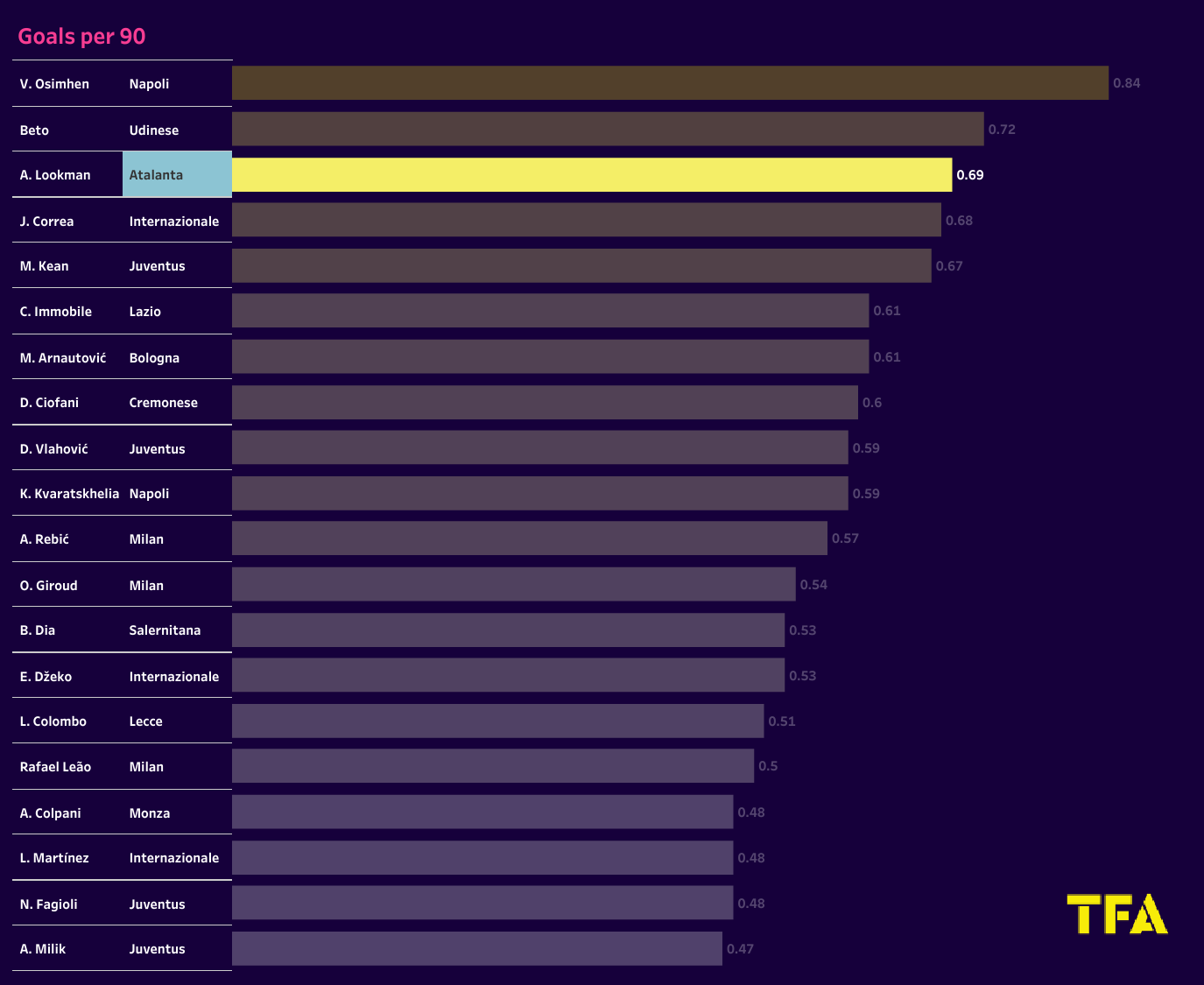 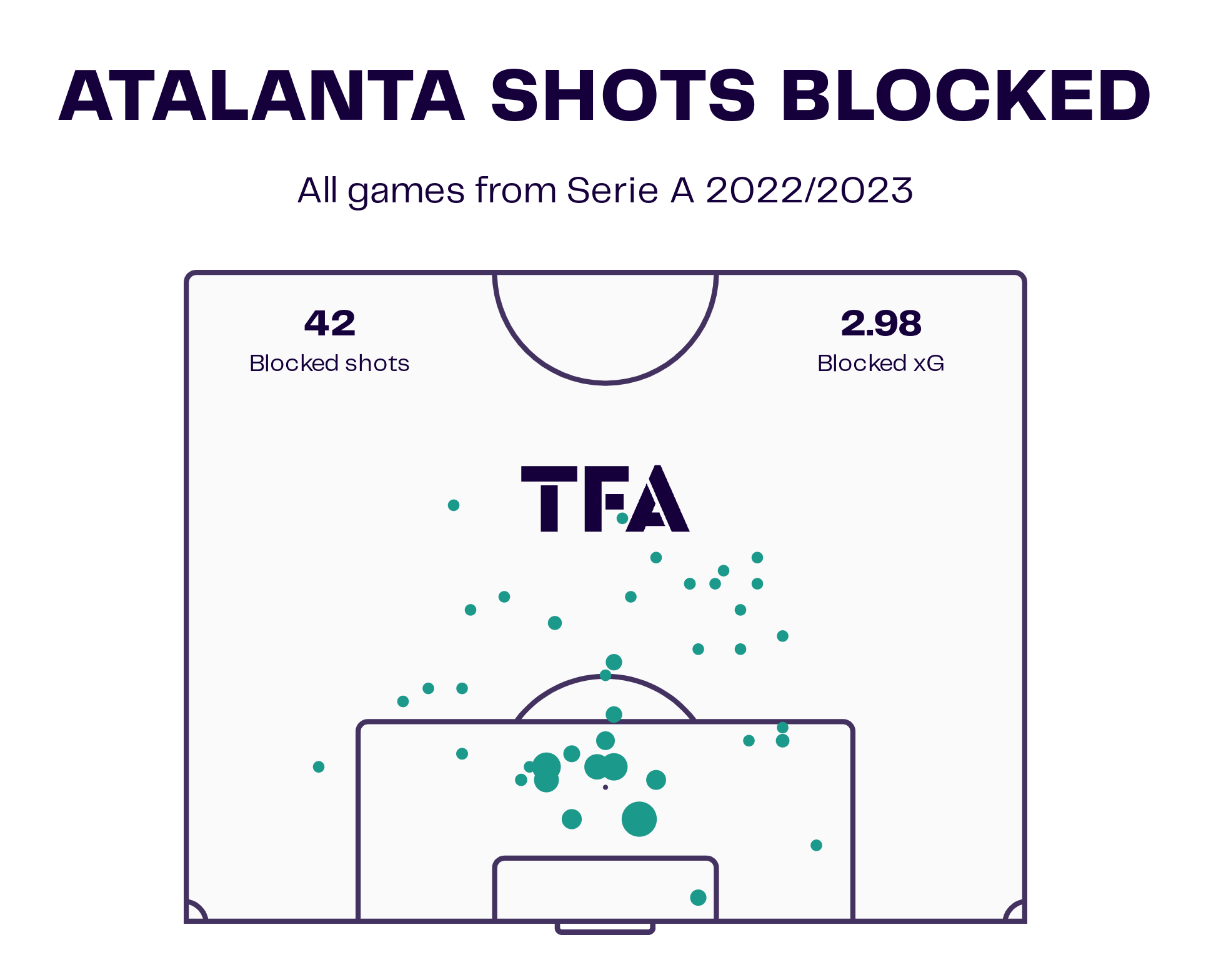 Gasperini’s men have conceded only four goals, averaging 0.57 goals per match in the seven Series A games this season. Atalanta have a clean sheet percentage of 71% away from home. Atalanta’s defence has faced only 11.31 shots per game in away games. Defenders for Atalanta have thrown their bodies on the line and blocked 42 attempts. These blocks were significant and were made within their 18-yard area. Atalanta’s players have made 80.56 defensive duels and 34.25 aerial duels per game in the seven away games they have played this season.

Atalanta have been one of the most consistent sides in Serie A this season, especially in away games. Atalanta’s away form is one of the biggest reasons behind their successful start to the season. Atalanta’s players must draw inspiration from their excellent away form and begin competing similarly at home as they do away. Atalanta’s defence has done an exceptional job this season; meanwhile, the defenders’ performance increases more during the away games. Gasperini will hope that his men maintain their form after the World Cup and finish in the top four.