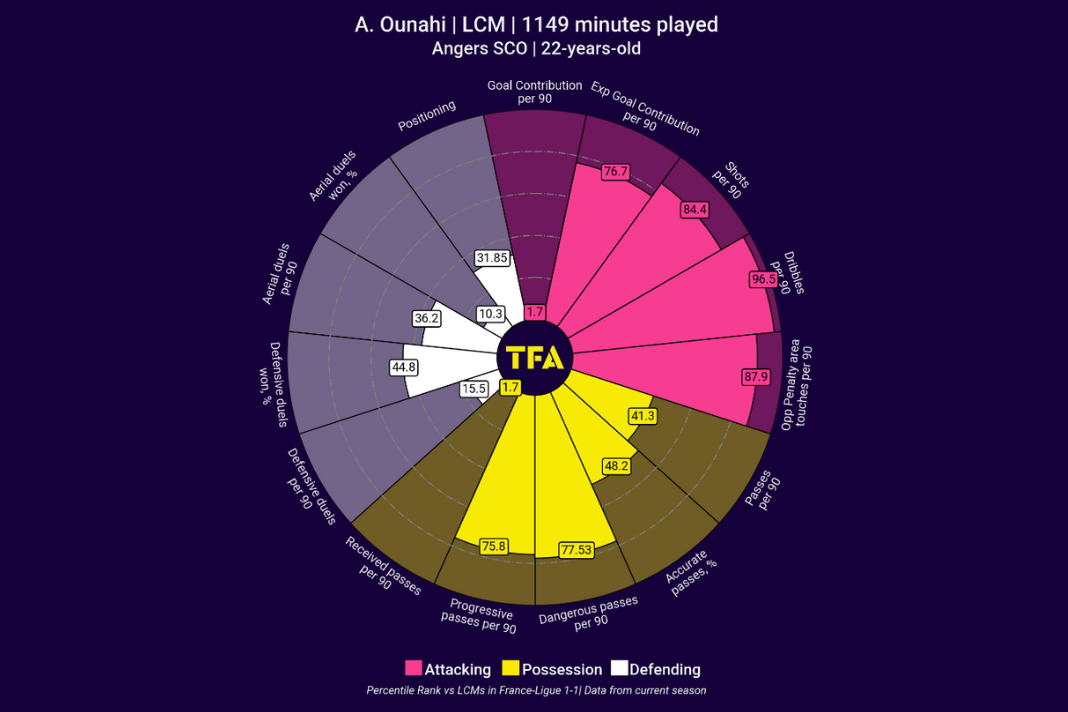 One player who has been a significant performer for Angers in Ligue 1 is 22-year-old Moroccan midfielder Azzedine Ounahi. The wonderkid is performing like a future star in the making and has impressed the scouts of various big European clubs with his performance this season in Ligue 1 and the 2022 Qatar World Cup. During the Qatar World Cup, Ounahi showed off a lot of his talent with his possession, passing, and defensive qualities. The Moroccan midfielder has been linked with a move to Napoli, Leicester City, and Newcastle United ahead of the winter transfer window. Serie A side Napoli will look to sign the midfielder, and here are some of the stats that show why the Italian giants are looking to sign him. 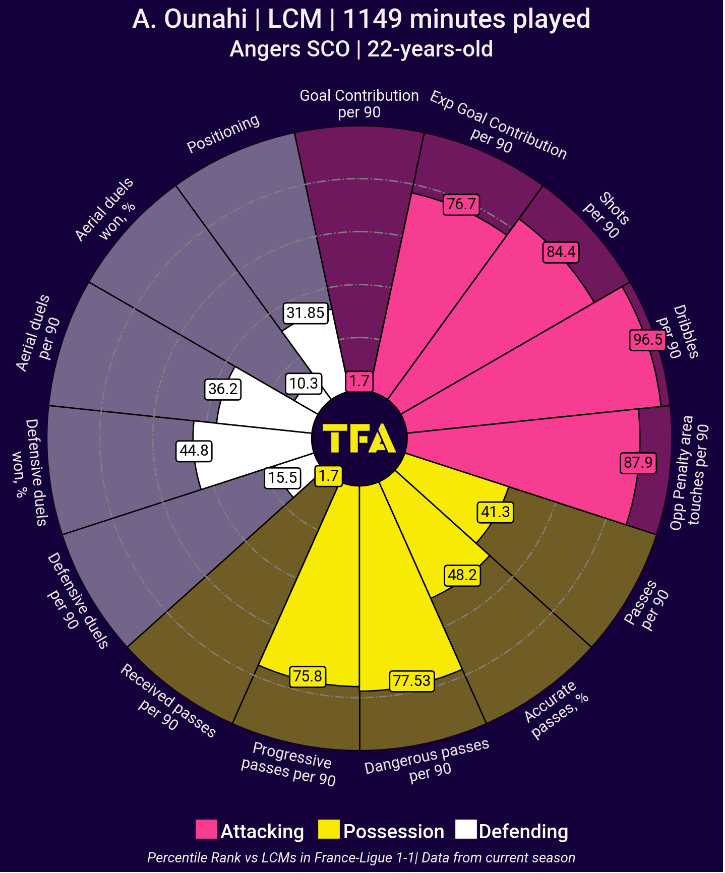 Azzedine Ounahi primarily operates as a left central midfielder from the left side of the midfield. The above viz shows the stats of the player in comparison to the other players featured as left-central midfielders in Ligue 1. In terms of dribbles per 90 stats, Ounahi clearly outperforms. Other statistics in which he excels include shots per 90, opponent penalty area touches per 90, progressive passes per 90, and dangerous passes per 90. 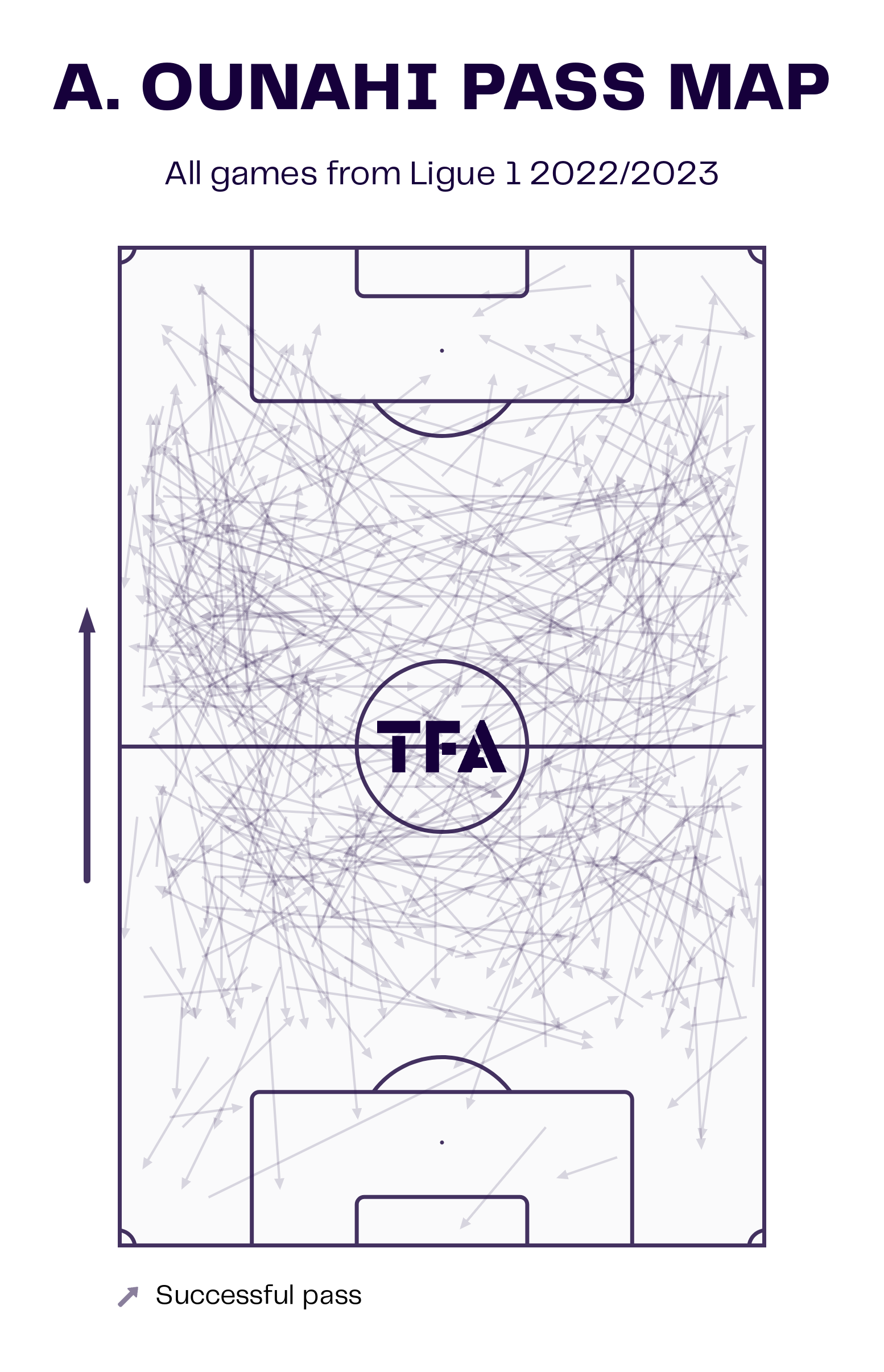 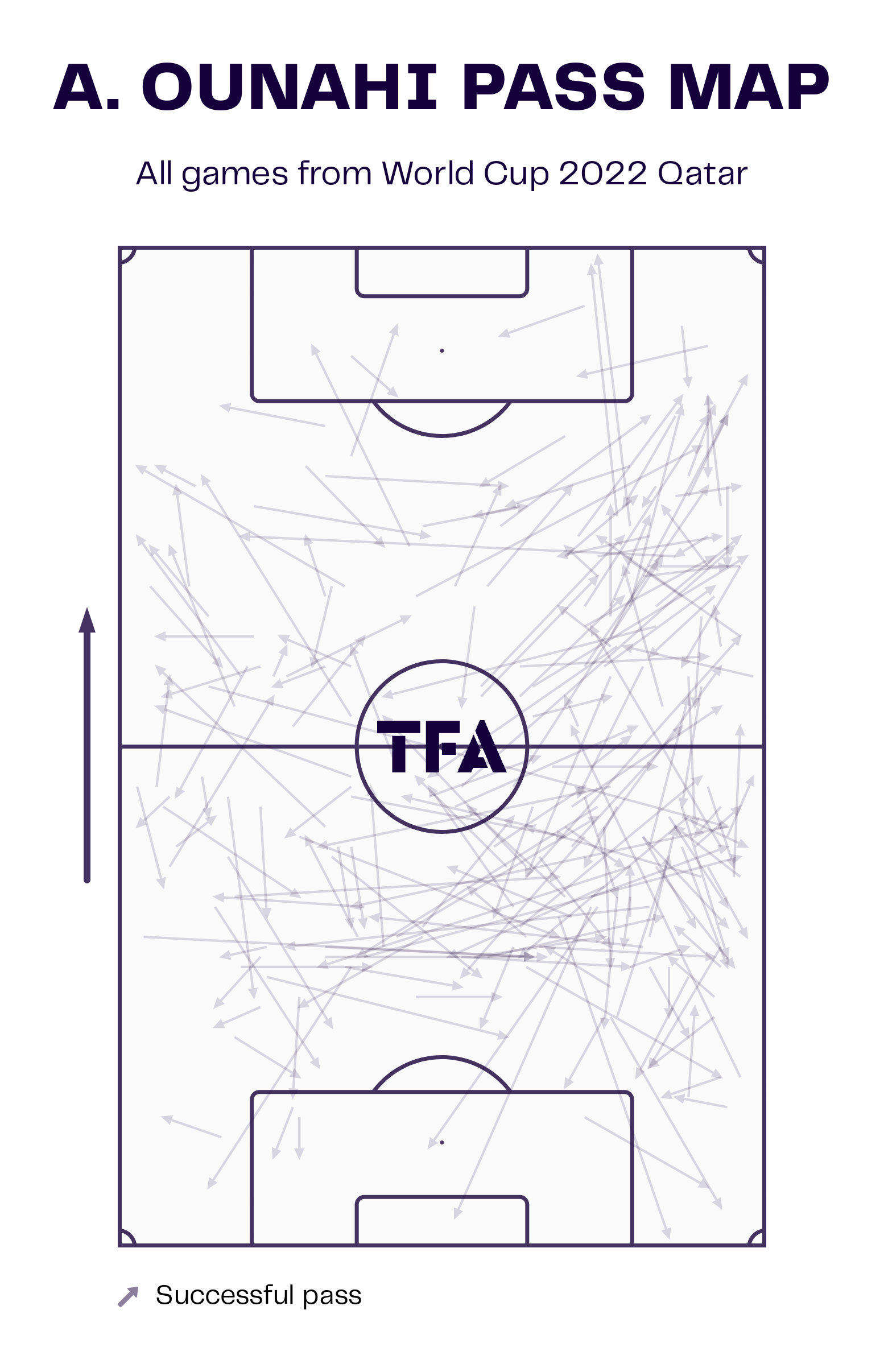 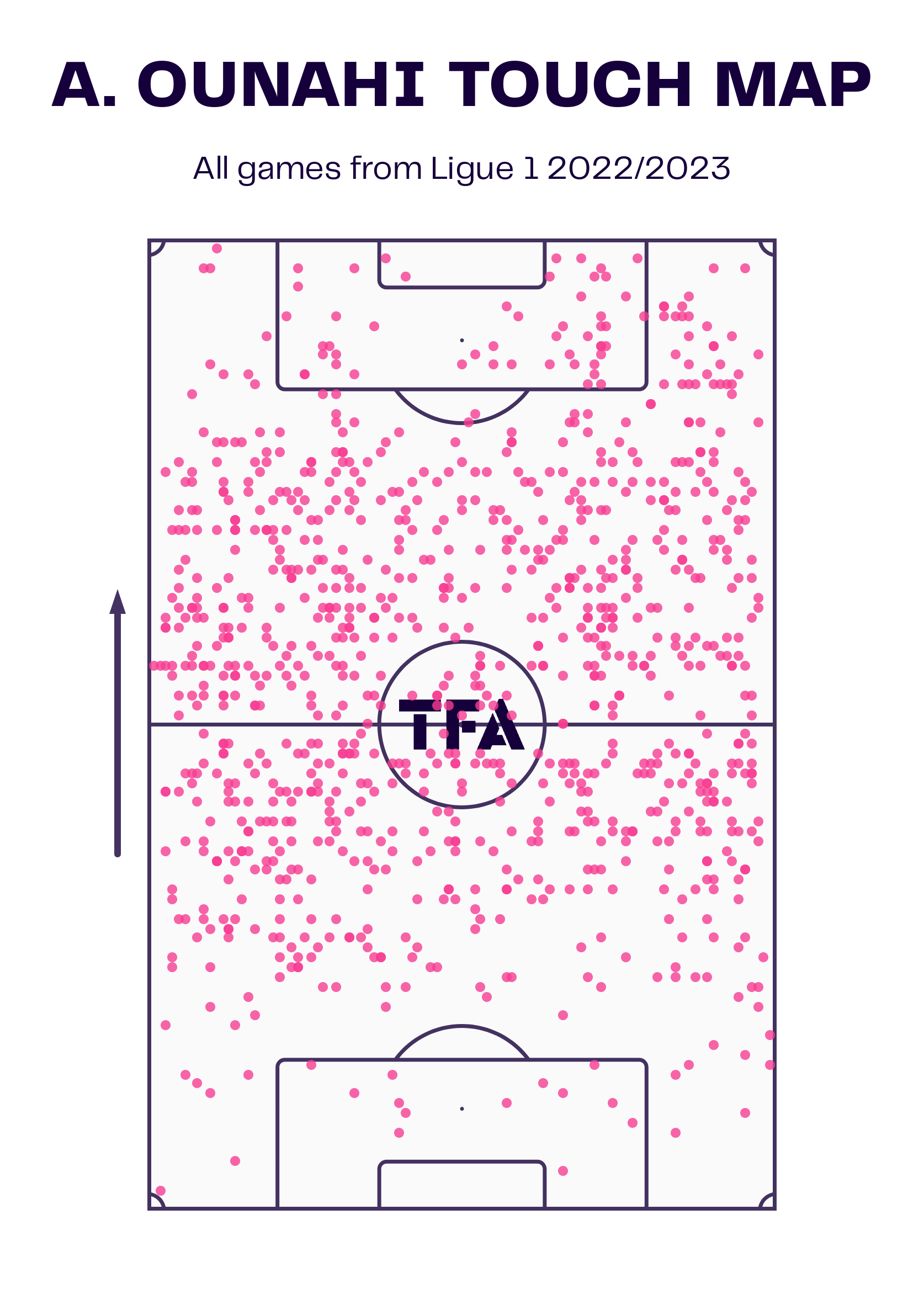 Azzedine Ounahi is a crucial player on Anger’s side because he provides creativity and a goal threat from midfield. Ounahi plays as a proper box-to-box midfielder, which can be seen via the above viz. Ounahi touches the ball around 58.8 times on average per game in Ligue 1. Ounahi makes 4.31 progressive runs per 90 minutes and attempts 5.87 dribbles per 90 minutes. He has created three big chances in the current Ligue 1 season. During the Qatar World Cup 2022, he made 2.85 progressive runs per 90, attempted 4.36 dribbles per 90, and touched the ball 51.3 times per game in the seven games. 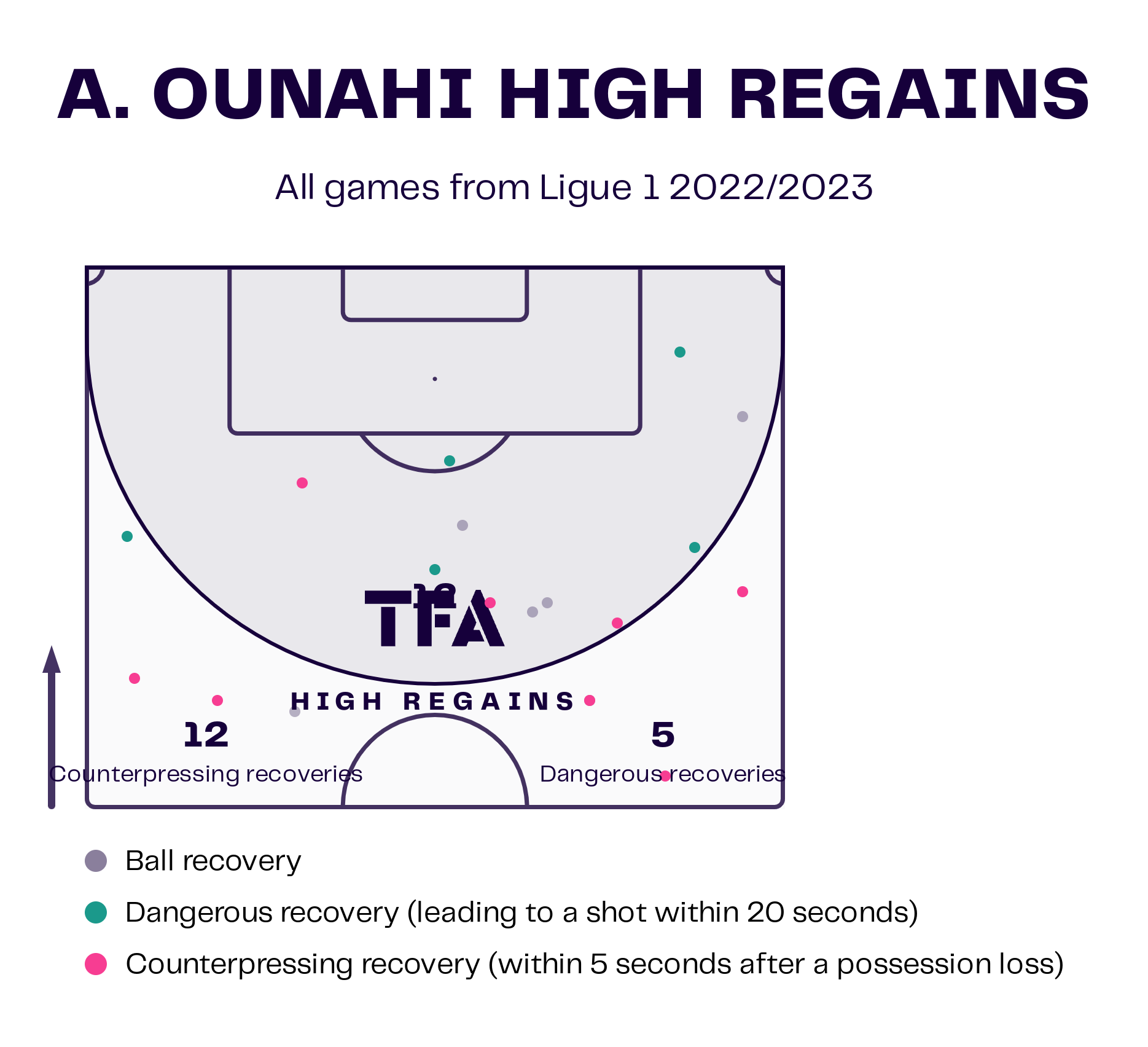 Azzedine Ounahi has worked hard to recover the ball for Angers in dangerous areas. This season, Ounahi has managed 12 regains in the final third. Five of these 12 recoveries have been dangerous and led to a shooting within the next 20 seconds of the recovery. The Moroccan midfielder has made 12 counter-pressing recoveries in Ligue 1. This season, he has attempted 68 recoveries from Anger’s midfield.

Whom would Ounahi replace? 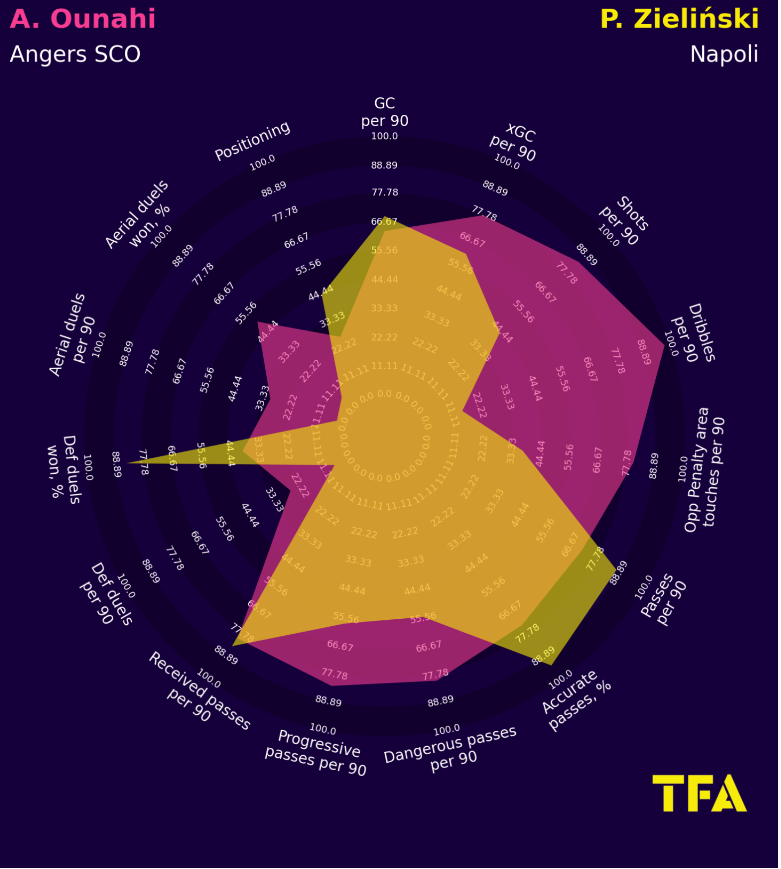 Azzedine Ounahi might replace the 28-year-old Polish star Piotr Zielinski as a squad player and a starting option for Napoli’s midfield. Both players outperform each other in a few stats. Ounahi outperforms Zielinski in progressive passes per 90, dribbles per 90, shots per 90, and dangerous passes per 90. Ounahi is only 22 years old and is a midfield powerhouse plus a hot prospect, which might force Napoli to play him ahead of Zielinski if he moves to the Napoli side in the January transfer window. Zielinski has made 15 Serie A appearances this season, scored three important goals, and provided five crucial assists for his Napoli side. Ounahi has controlled and dominated the midfield for his Angers side in the 14 appearances he has made in Ligue 1 this season.

Napoli are a side that has always believed in youngsters and hot prospects with massive potential who might become superstars in the future. Azzedine Ounahi is a player that fits perfectly into the Napoli side, as he is a hot prospect with massive potential as a central midfielder. Ounahi will provide the much-needed midfield depth required in the current Napoli side and can also offer some creativity from the midfield. He can also be a good backup for the rotation of the midfield duo of Stanislav Lobotka and Frank Anguissa, so the signing of Ounahi makes sense from Napoli’s perspective; still, the transfer should not cost more than 20 million euros. If Ounahi can replicate his World Cup performances for Napoli, he will be a bargain signing.

Milan on the move: Still time for Pioli to salvage something...

“Ronaldo can continue playing until the age of 40” – Ferreira