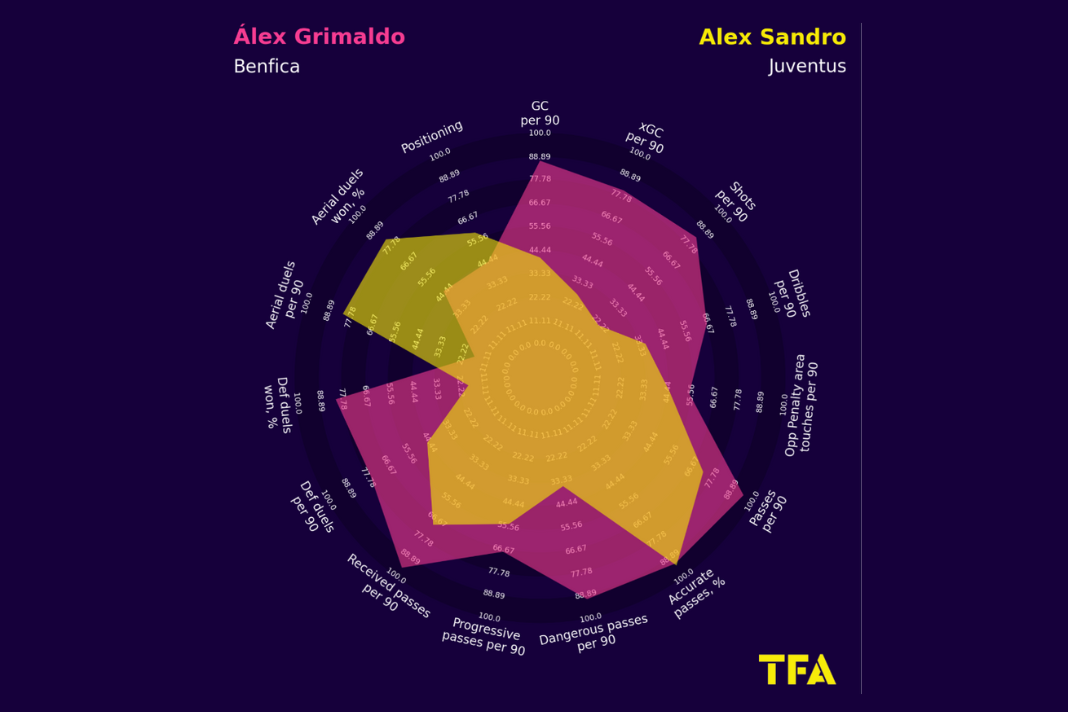 The one player who has always shone and been one of the most consistent performers for the Benfica side in Liga Portugal in the last half a decade is 27-year-old Spanish left-back Alex Grimaldo. He has consistently been one of Benfica’s best players and the league’s best left-back. He has also thrived in several European tournaments, including the Champions League and Europa League. Alejandro Grimaldo has been essential for Benfica this season in Liga Portugal, scoring one goal and contributing three assists in 12 games. European giants like Borussia Dortmund, Inter Milan, and Juventus are interested in securing the services of this vital player on a free transfer next summer. Juventus sees the Spaniard as a replacement for the ageing Alex Sandro. 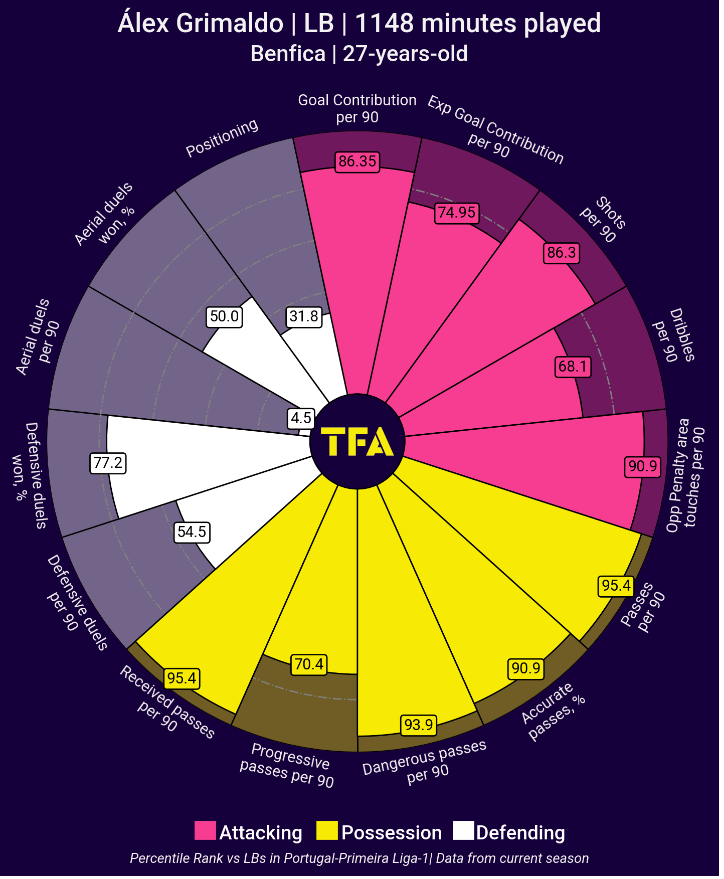 Alejandro Grimaldo has been a vital member of Benfica’s Liga Portugal team for seven years. Despite being a defender, the 27-year-old Spanish left-back enjoys going forward and contributing to the team’s offensive output. The Spaniard has played 12 matches in Liga Portugal this season, scoring one goal and providing three assists. The above viz shows the stats of the player in comparison to the other players featured as left-backs in Liga Portugal this season. Grimaldo has dominated the passes per 90 stats. He has also been dominant in the following stats: received passes per 90, dangerous passes per 90, accurate passes%, and goal contribution per 90. 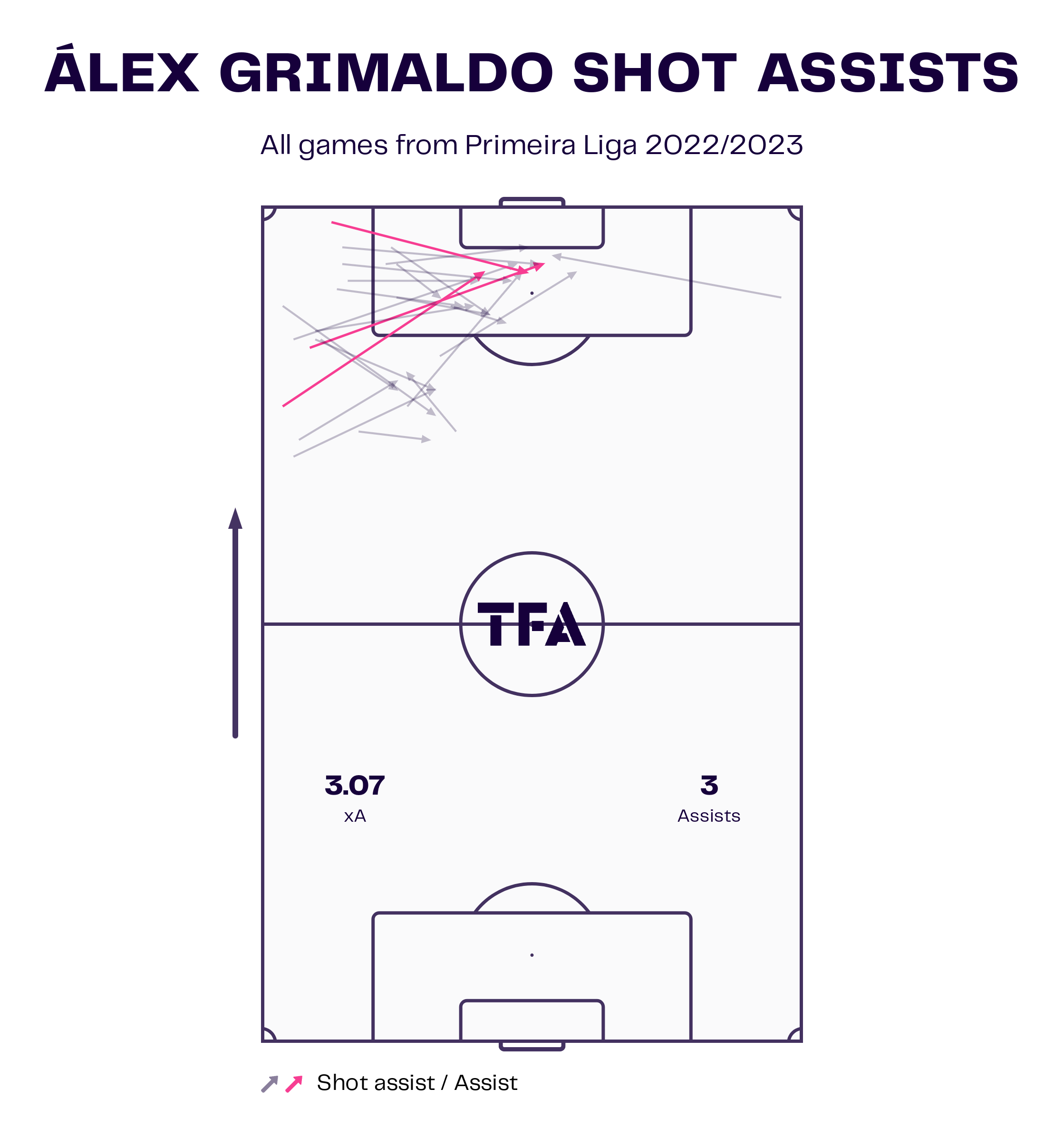 Alejandro Grimaldo has always helped his side by giving key assists and producing openings for the attackers. The Spaniard has already begun to deliver this season with three assists. Grimaldo has a reasonable enough passing success rate of 87%. He averages around 2.4 key passes per game and has provided three assists in Liga Portugal this season. So far, the 27-year-old Spanish left-back has created five big chances. 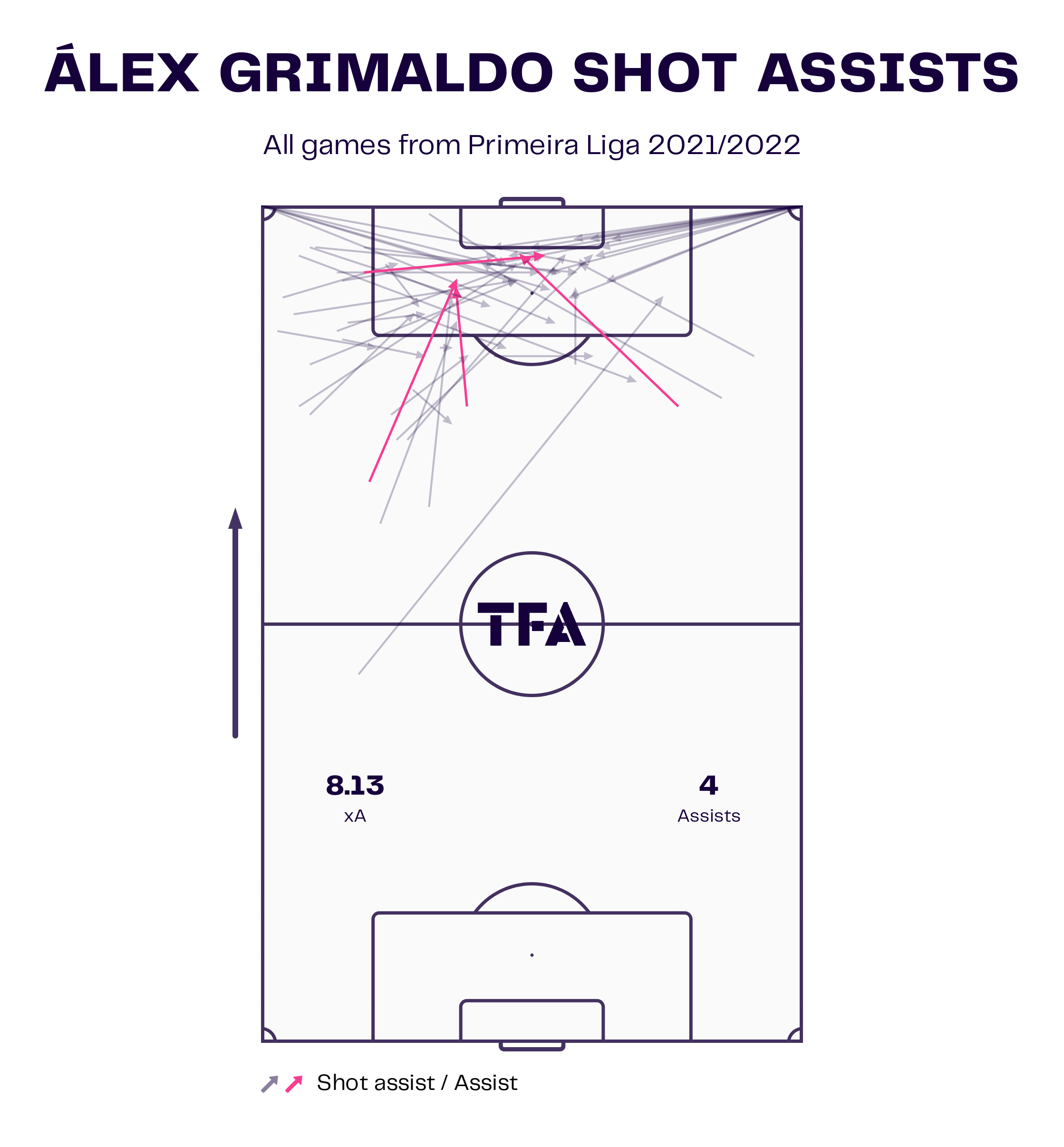 Alejandro Grimaldo has shown a good improvement from last season, providing three assists in his first 12 appearances. The previous season, he assisted five times for his Benfica teammates in Liga Portugal. The 27-year-old Spaniard is on course to break the record of five assists he provided in the last season of Liga Portugal. Grimaldo has attempted 715 passes with a success rate of 86.43%. He also makes 60.42 passes per 90 on average and makes 52.23 successful passes per 90 on average during the game. He also makes 28 accurate passes in the opposition’s half per game. 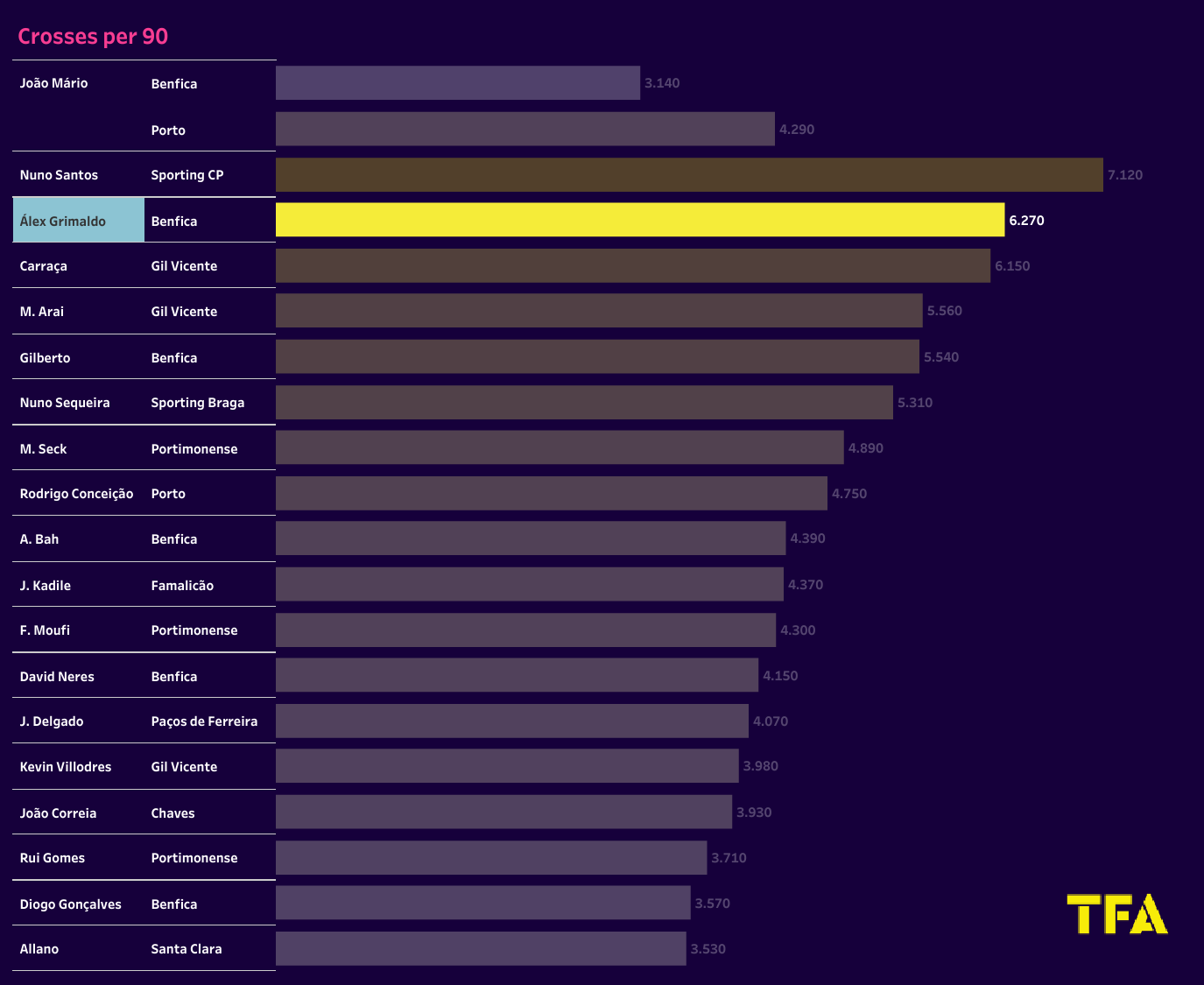 The 27-year-old Spaniard has shown his top game for Benfica. The viz above depicts the statistics of Liga Portugal players with high crosses per 90 minutes. Grimaldo has outstanding numbers and provides 6.27 crosses per 90. He has made 28 key passes so far in the season, and his xA is 0.34 per 90 minutes. 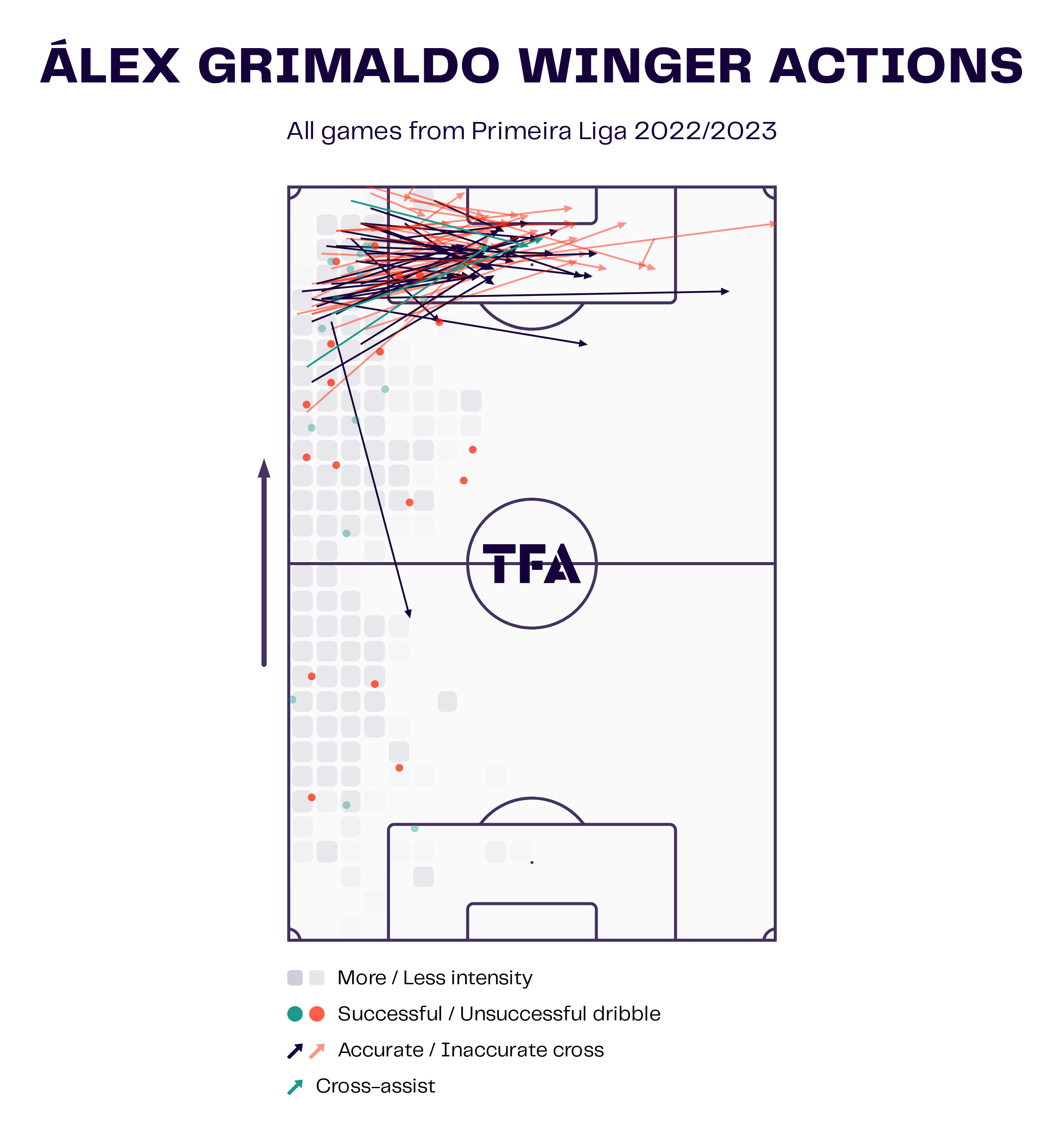 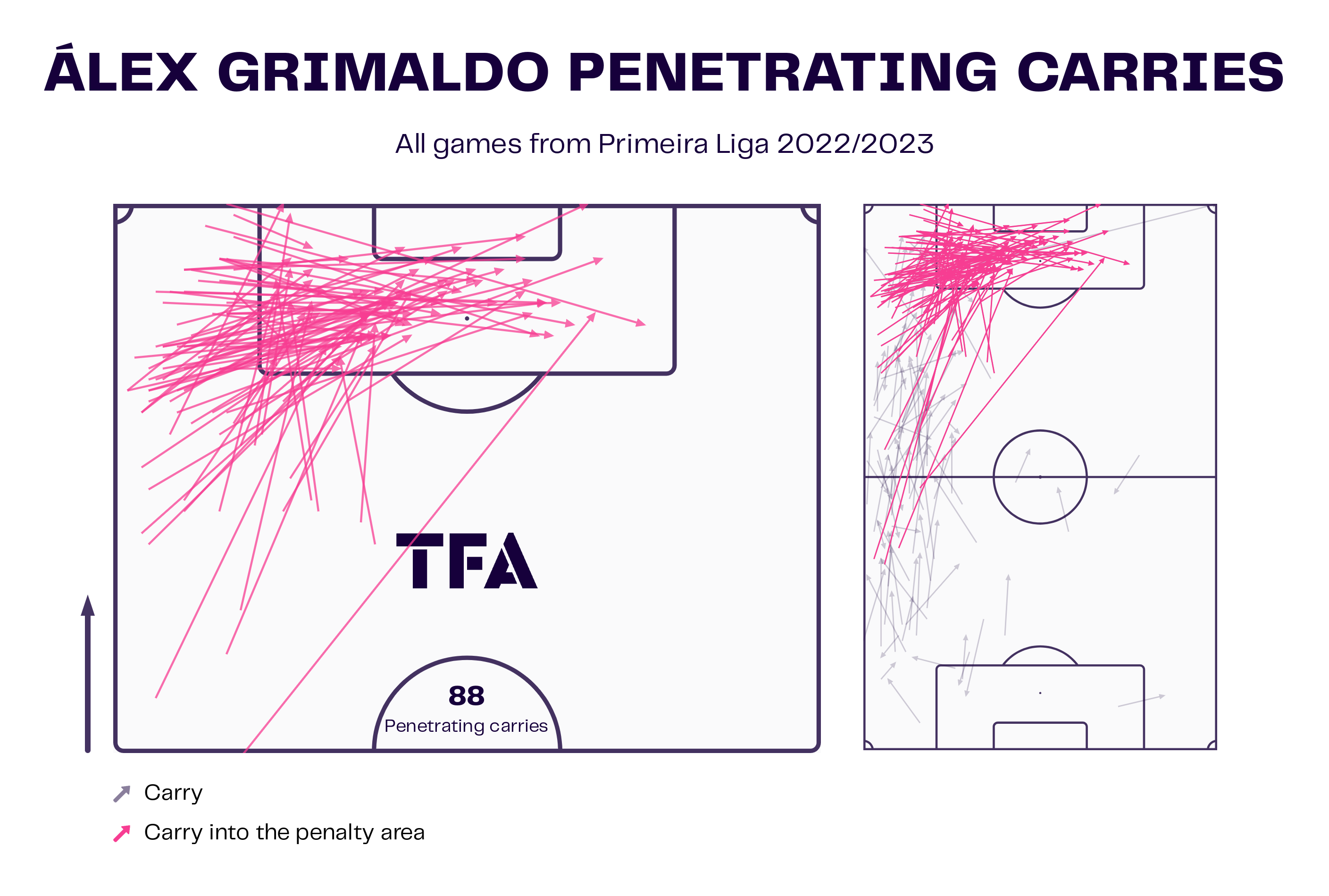 Alejandro Grimaldo is a left-back who likes to carry the ball nearby and into the penalty box whenever he is given the opportunity. He has made 88 penetrating carries in 12 appearances in Liga Portugal this season. 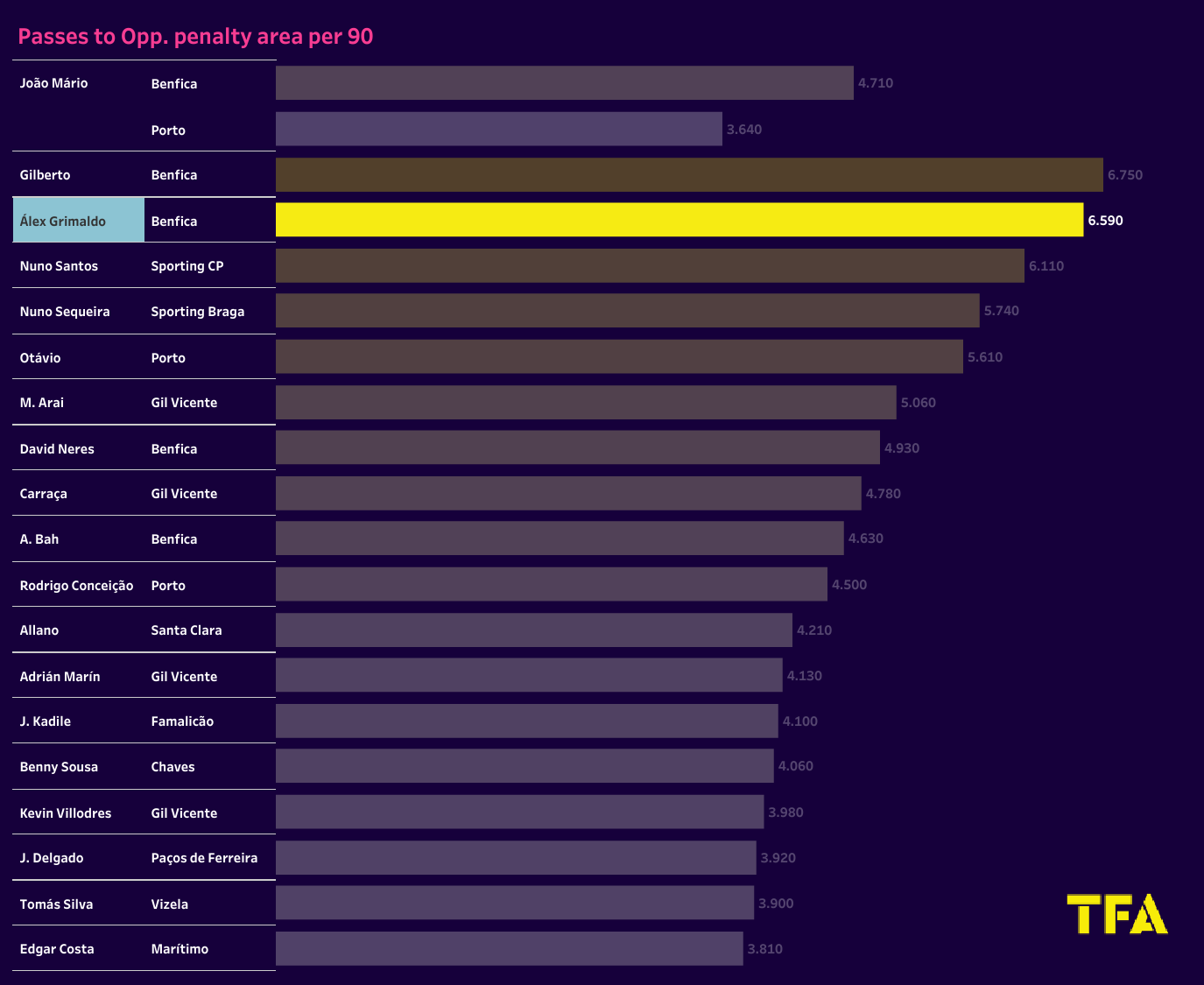 Alejandro Grimaldo dominates in almost every attacking department. There is a significant difference in the number of dangerous passes per 90, received passes per 90, and shots per 90 between him and Alex Sandro. The above viz compare the stats between Alejandro Grimaldo and Alex Sandro. Sandro has a 90 per cent advantage over Grimaldo in aerial duels, and he wins % of the time.

The signing of Alejandro Grimaldo will provide Juventus with a much-needed attacking option from the left-back position. From a Juventus standpoint, Grimaldo’s signing makes sense because Alex Sandro is getting older and may leave the club soon. He can provide a much-needed attacking threat in Allegri’s system and form a formidable partnership with Kostic on the left flank of the pitch.

How were Napoli able to exploit Roma’s haphazard disorganisation?