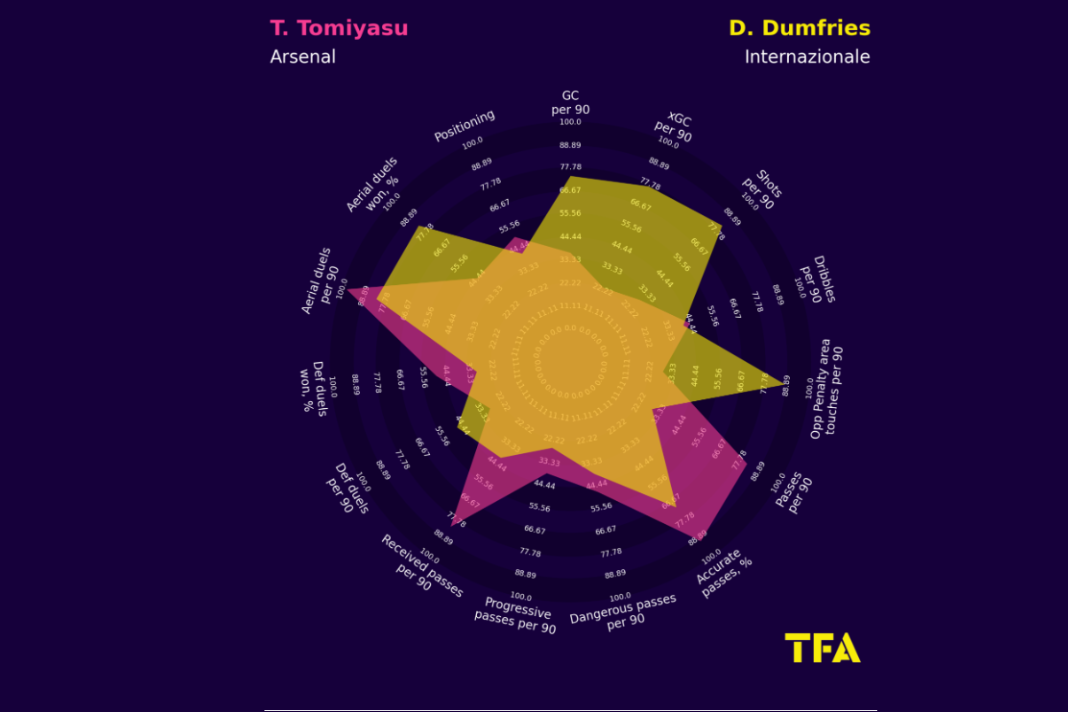 Denzel Dumfries, a 26-year-old Dutch defender, is one player who has risen to prominence since the last Euros. The Dutch defender has been performing outstandingly for his club, Inter Milan, in Serie A and for his country, the Netherlands, in the 2022 Qatar World Cup. Reportedly, Arsenal are interested in doing a swap deal for Dumfries with the versatile 24-year-old Japanese defender Takehiro Tomiyasu. The Japanese defender has been out of Arsenal’s starting lineup this season, starting only four games in the English Premier League. Tomiyasu is a versatile defender who can play right-back and centre-back, so the swap deal might not be a bad option for Inter Milan. 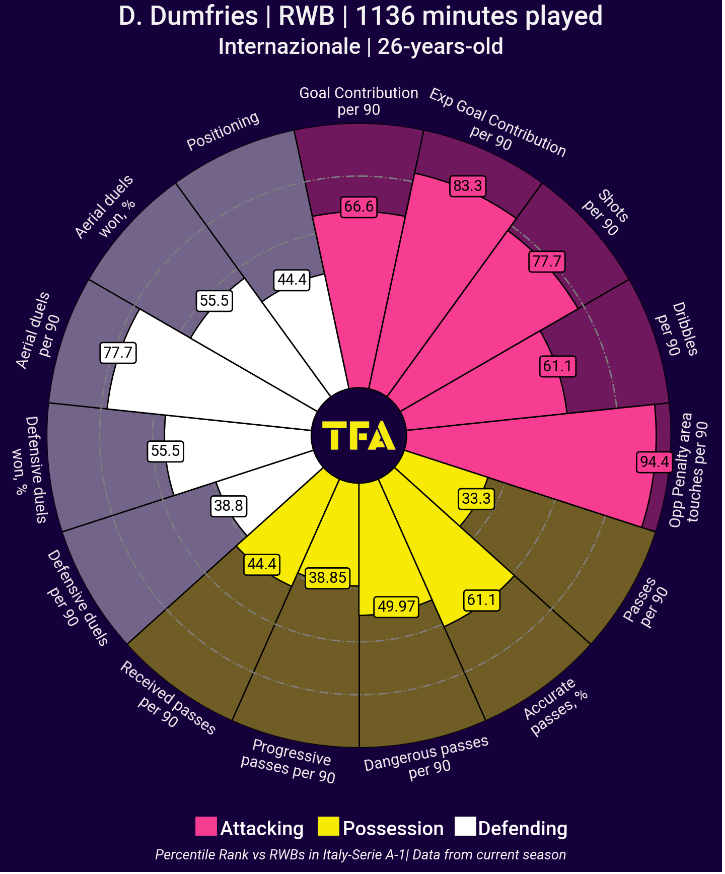 Denzel Dumfries has been an integral part of this Inter Milan side. This season, the Dutchman has made 15 appearances in Serie A and contributed one goal and two assists from the right wingback position. The above viz shows the stats of the player in comparison to the other players featured as right-wingbacks. It can be concluded that Dumfries has dominated in the opposite penalty area in terms of touches per 90, which is 94.4 per 90. A few other areas in which he has dominated are expected goal contribution per 90 and shots per 90. 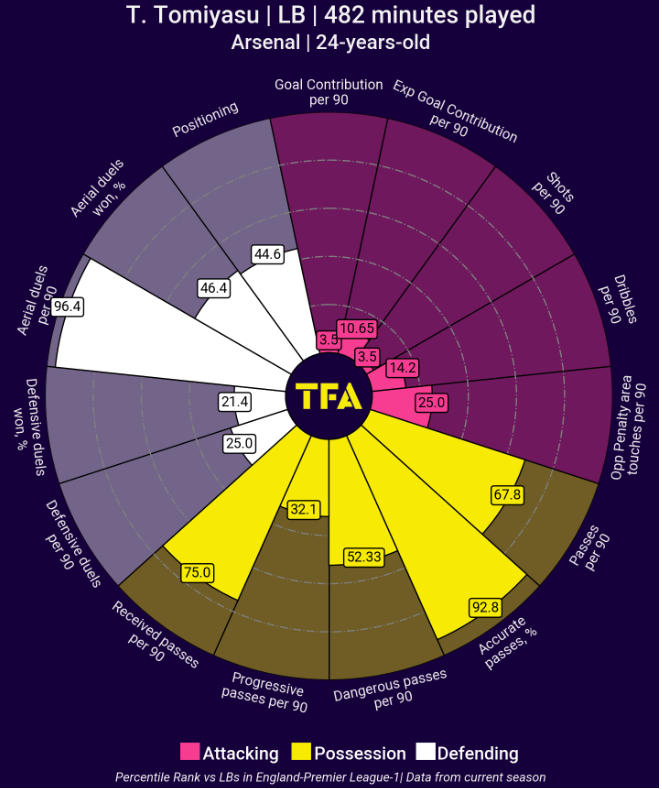 Tomiyasu has been struggling with his fitness and has only played for 482 minutes in the English Premier League this season. The Japanese defender is versatile and can play as a left-back, right-back, or centre-back whenever required. The above viz shows the stats of the player in comparison to the other players featured on the left. It can be observed that Tomiyasu has dominated in the aerial duels per 90, which is 96.4 per cent. A few other areas in which he has dominated are accurate pass % and received passes per 90. 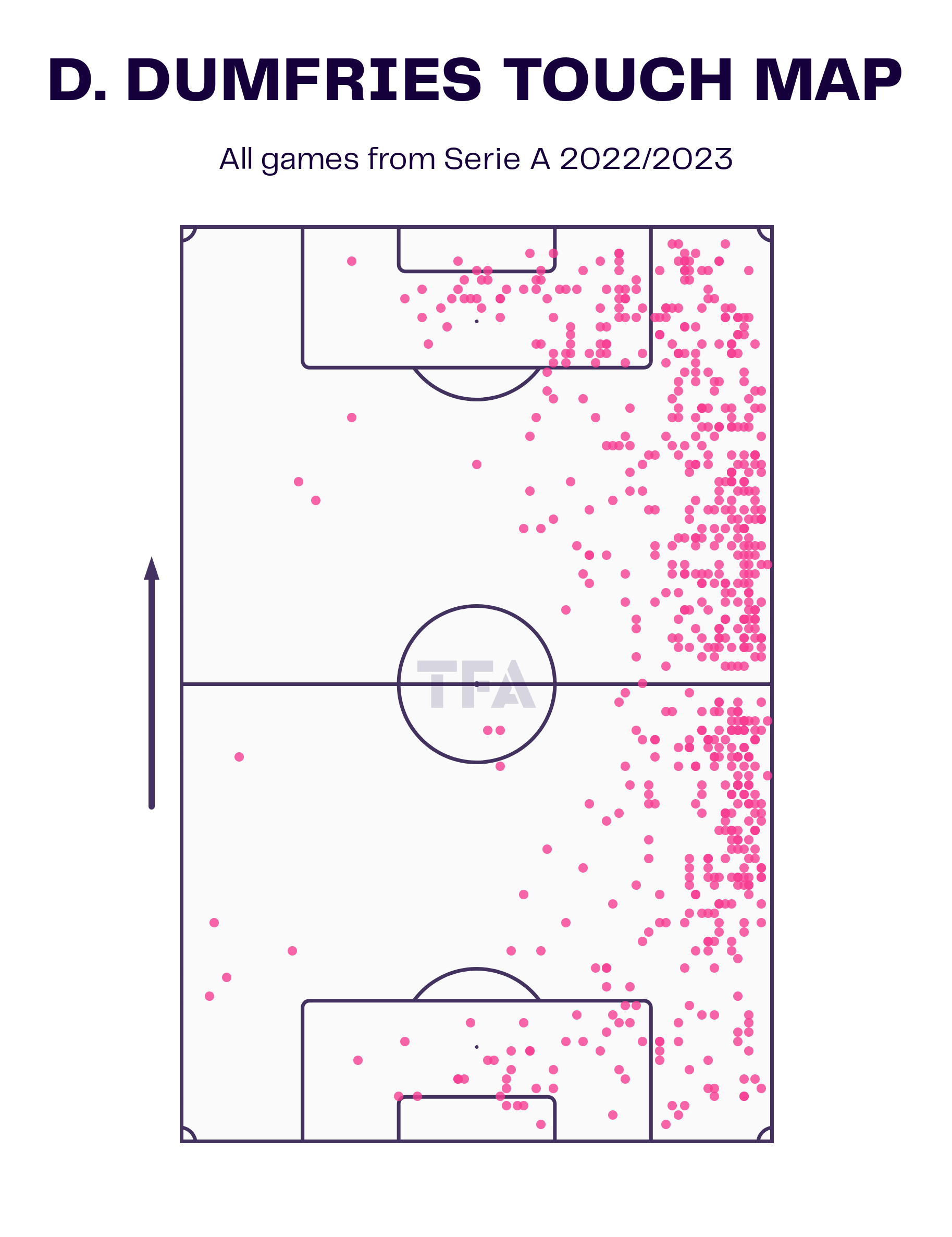 Dumfries is a defender who likes to make a lot of offensive runs from the right wingback position. He wants to provide an attacking option for Simone Inzaghi’s Inter, as he likes to get into the box and even creates chances for other Inter attackers and midfielders to score. With eight big chances so far this season, the Dutchman has created the second-most in Serie A. He has also made 18 key passes for the Inter side. 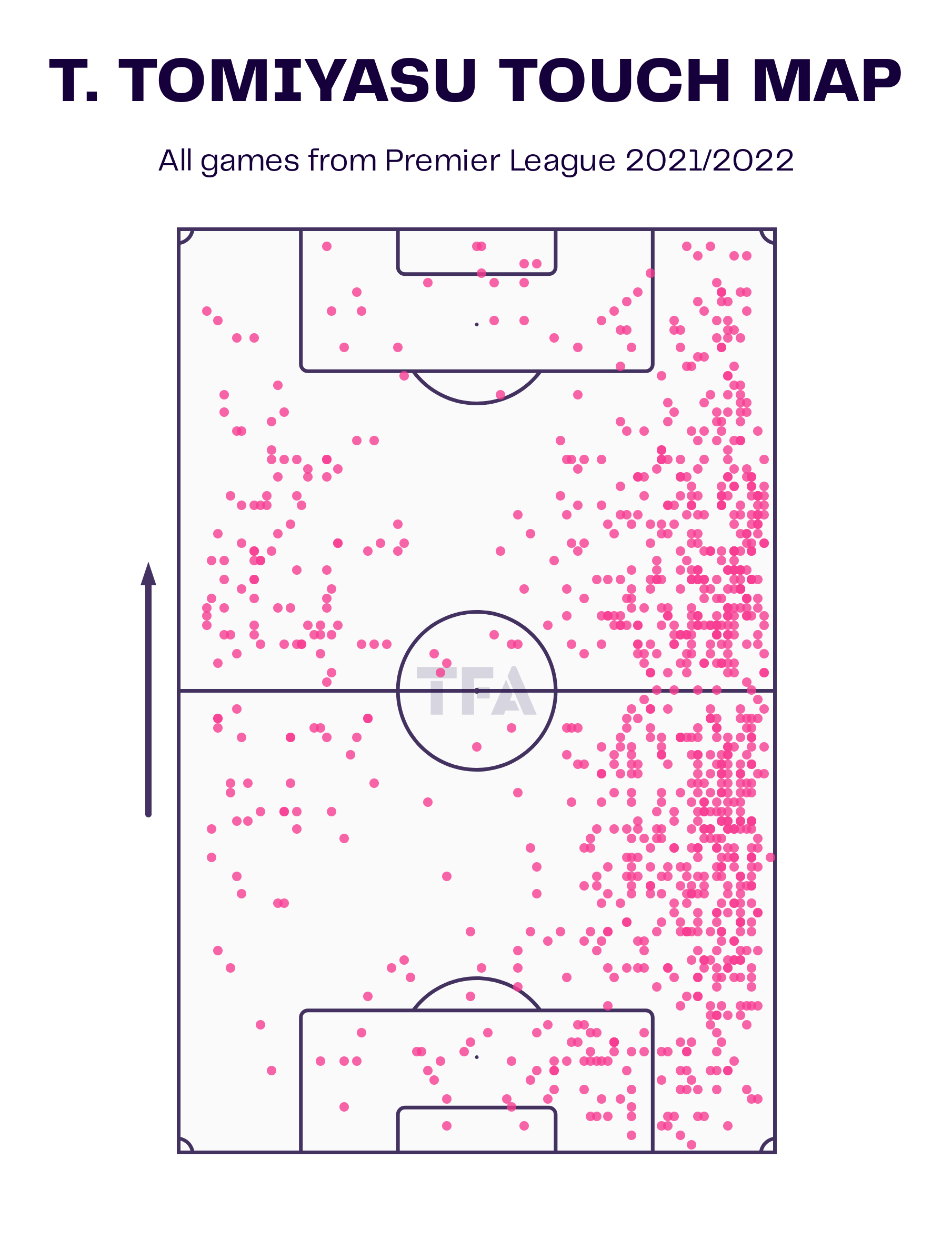 Tomiyasu is a proper old-fashioned fullback who does not like to take many risks in the attack going forward and plays the game conservatively by not making many attacking runs in the box. Tomiyasu has only provided one assist in the English Premier League since he joined Arsenal last season. Tomiyasu has the same defensive and possession numbers that fullbacks used to have. 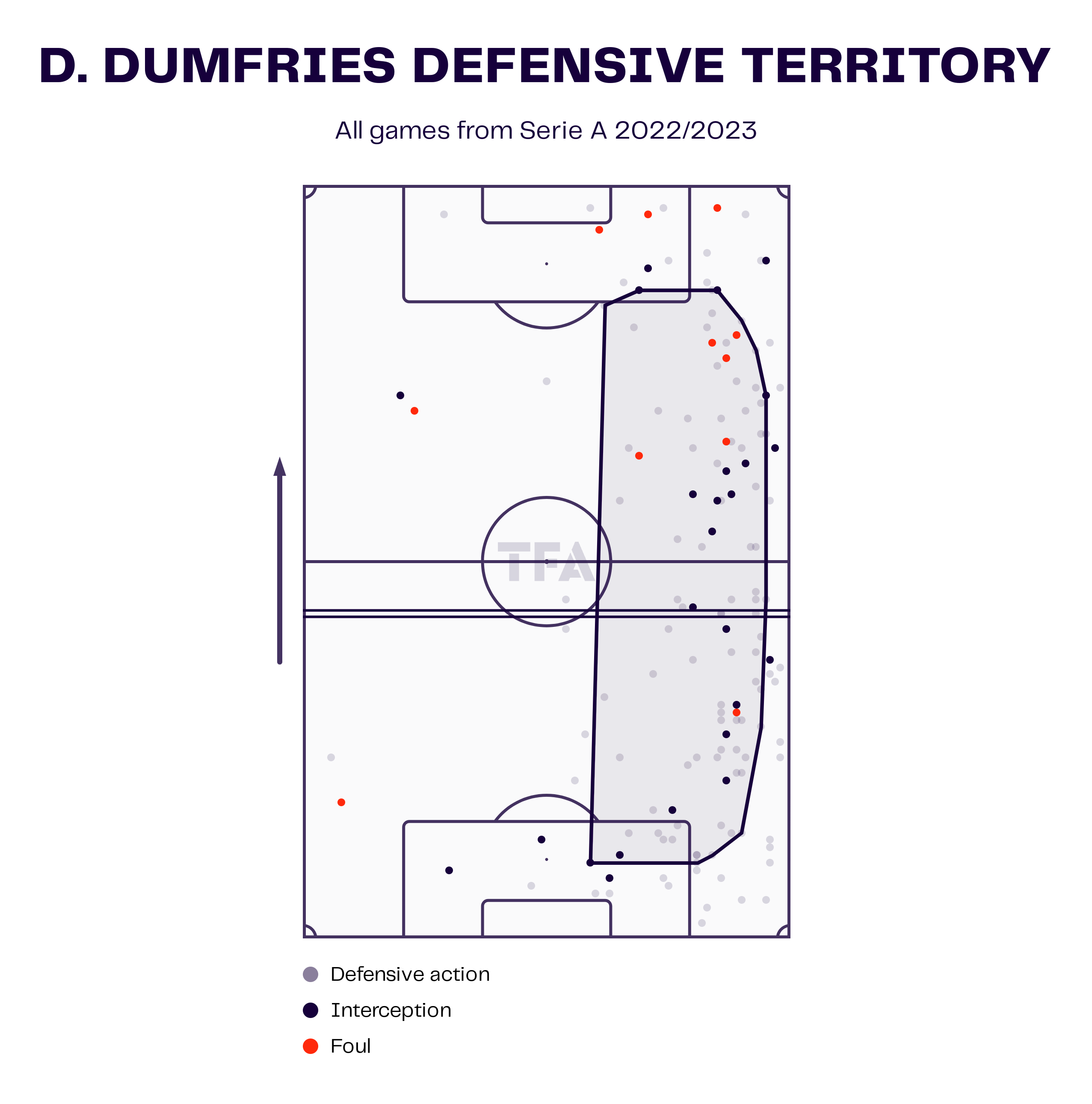 Dumfries is a good wingback, but sometimes he might get caught defensively by the opposition players as he likes to go forward whenever he is presented with any chance. Dumfries has won 58 duels in Serie A this season, which is the third-most by any Inter Milan player. Dumfries needs to improve his defensive work a little bit if he wants to become a complete defender. 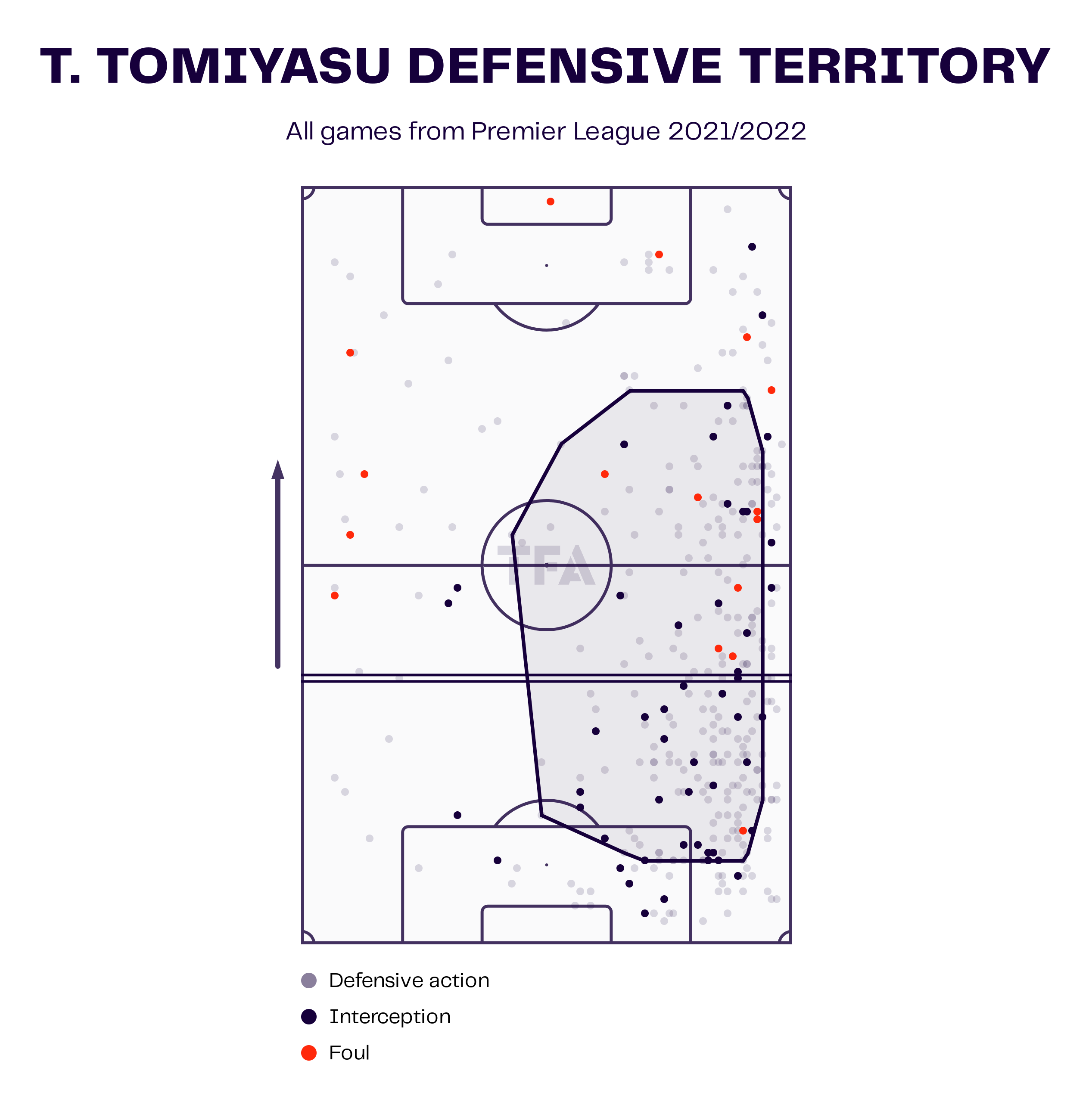 Tomiyasu is a good fullback, but sometimes he gets confused in possession when an attack is being made and a final key pass or a cross is required. Tomiyasu likes to make 1.7 tackles per game, 2.6 clearances per game, and 1.1 interceptions per game, which are pretty impressive numbers for any fullback. 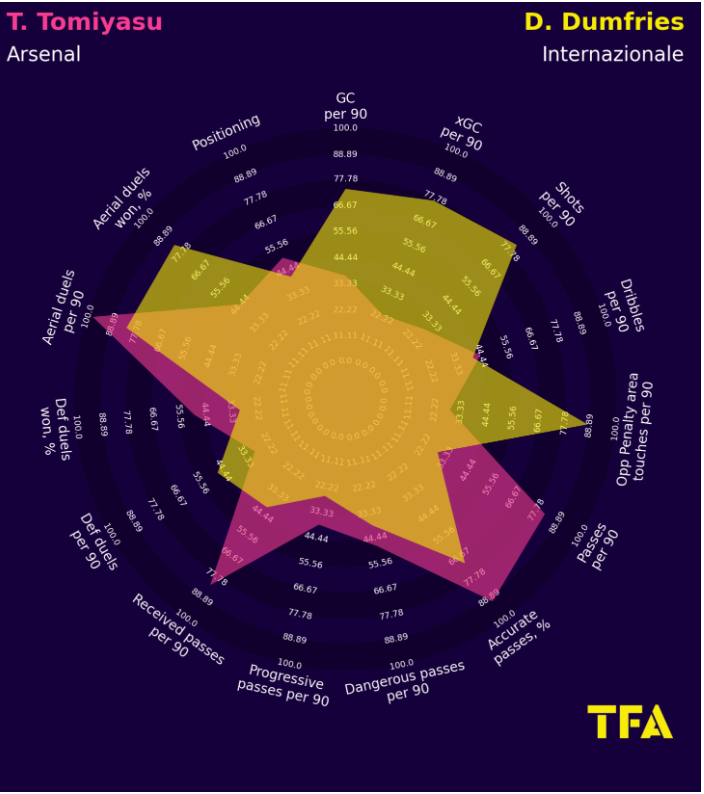 Denzel Dumfries dominates in almost every attacking department, and there is a significant difference in the number of offensive penalty area touches per 90 and shots per 90 between him and Takehiro Tomiyasu. The above viz shows the comparison of the stats between Denzel Dumfries and Takehiro Tomiyasu. Tomiyasu leads over Dumfries in defensive and possession stats, especially in aerial duels per 90 and passes per 90.

Inter Milan’s defence has been pretty inconsistent in the Serie A this season, having already conceded 22 goals. The signing of Tomiyasu will provide much-needed depth to Inter Milan’s defence, as he is versatile and can play as a left-back, centre-back, and right-back. Tomiyasu’s signing from Inter Milan’s perspective makes sense, but it should not be at the cost of a swap deal for Dumfries, as he provides a much-needed attacking threat in Simone Inzaghi’s system.

The Stats: Spain’s league title secured by win against over Switzerland

Down the pecking order: AC Milan are right to reject move...

Blessing in disguise: Juventus star’s failed transfer could be positive for...

Milan on the move: Still time for Pioli to salvage something...