Home Analysis Under the microscope: How the Serb has proven to be a perfect... 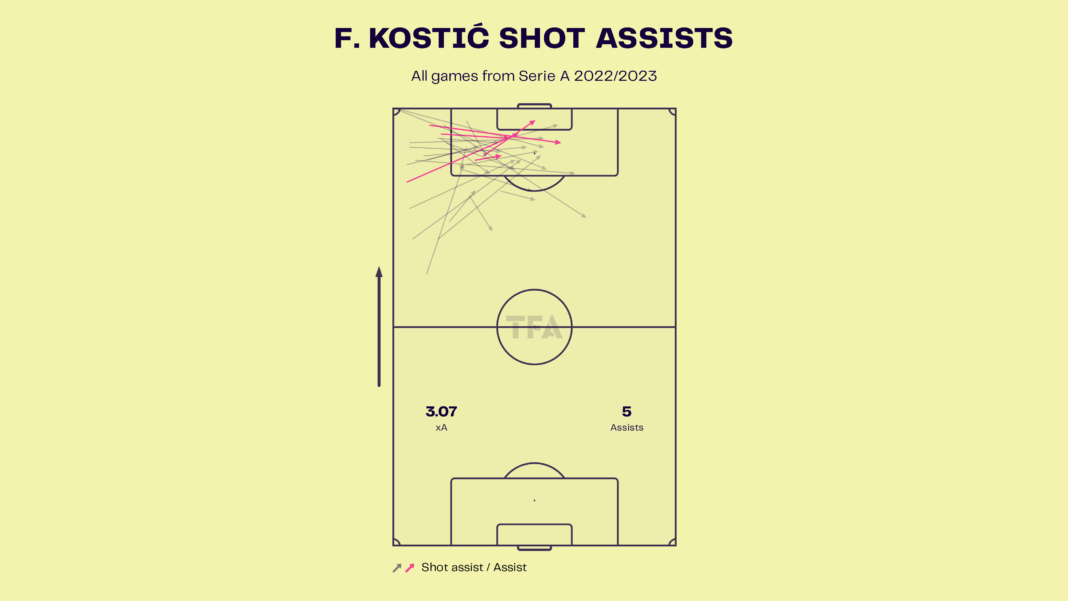 Juventus’ summer signing Filip Kostic has taken Serie A by storm with his recent performances in the league. He has consistently been the key performer for Juventus, scoring one goal and providing five crucial assists in 15 Serie A appearances. The 30-year-old Serbian has been one of the best left-wingers in Serie A and the top five European leagues. 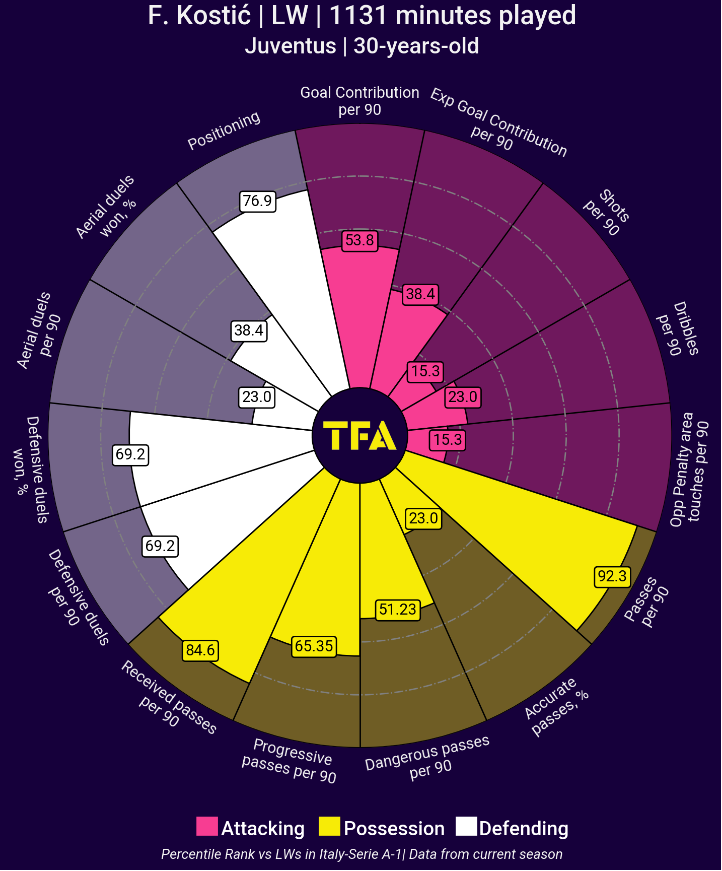 Filip Kostic has consistently dominated the top assist provider list in the Bundesliga over the last four seasons. The player mainly attacks from the left side of the midfield. The Serbian has made 15 appearances in Serie A this season, scoring one goal and providing five assists. The above viz shows the stats of the player in comparison to the other players featured as left-wingers in Serie A this season. It can be observed that Kostic has dominated in the passes per 90 stats. Other stats where he has been dominant are passes received per 90, positioning, and defensive duels won per 90. 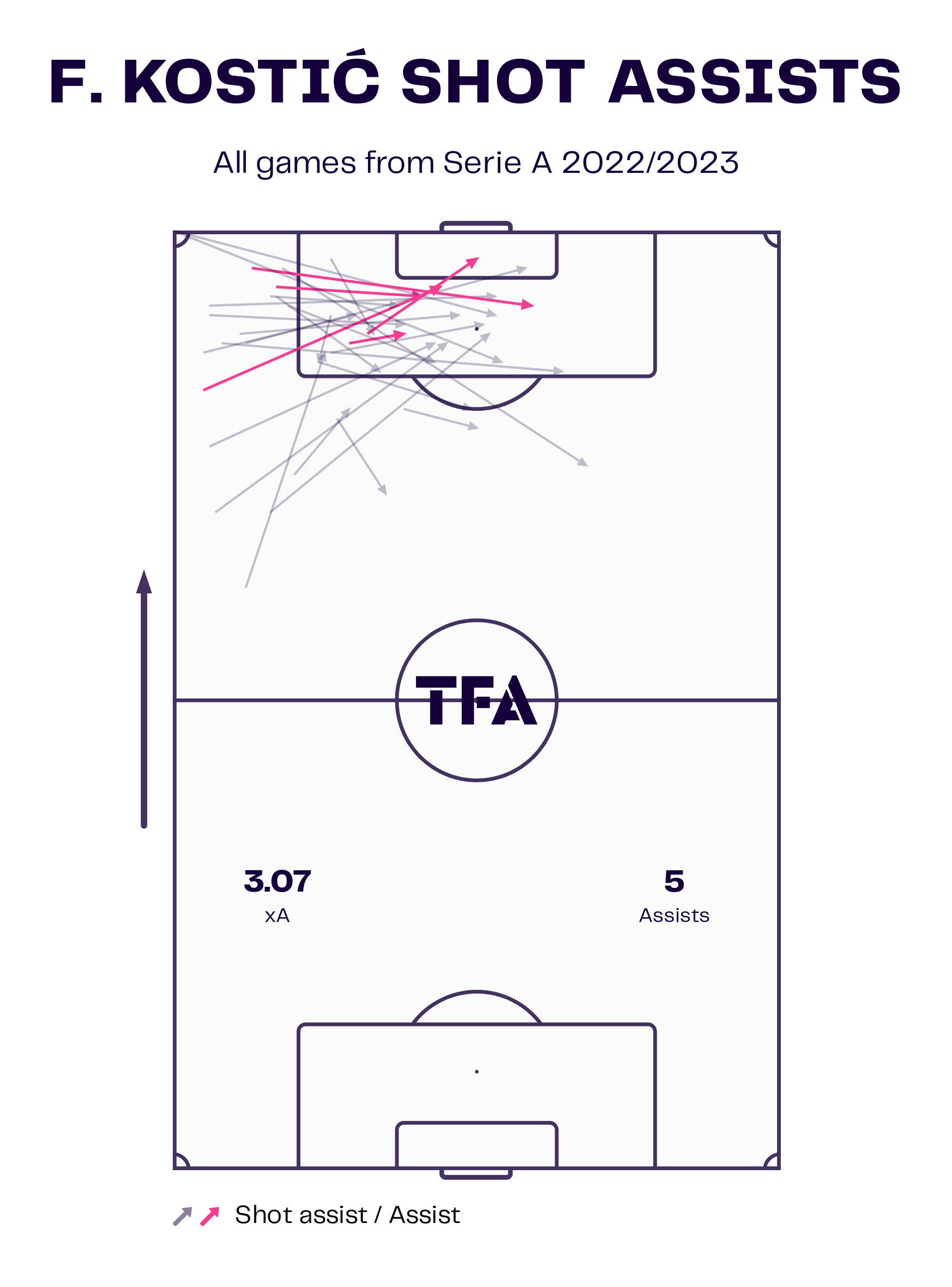 Filip Kostic has always contributed to his clubs by providing crucial assists and helping the attackers score goals by creating big chances. The Serbian has already delivered by providing five assists this season. Kostic has a reasonable enough passing success rate of 80.5%. He averages around 2.1 key passes per game and has provided five assists in Serie A this season. So far, the experienced Serbian has created seven big chances. 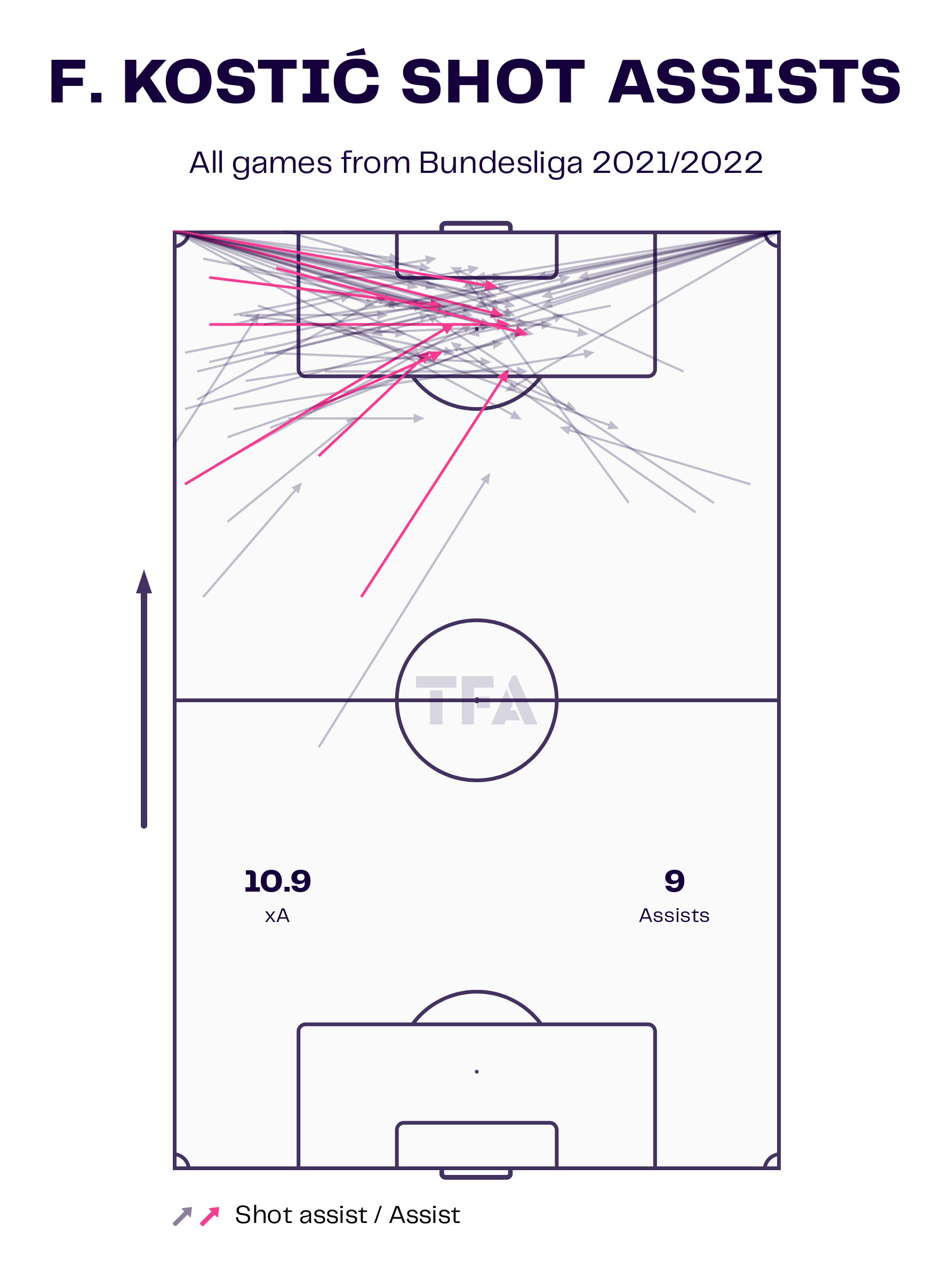 Filip Kostic provided nine assists to his Frankfurt teammates in the German Bundesliga last season. This season, the Serbian winger has five assists for his new Serie A club Juventus. He is on course to break the record of nine assists he created last season. 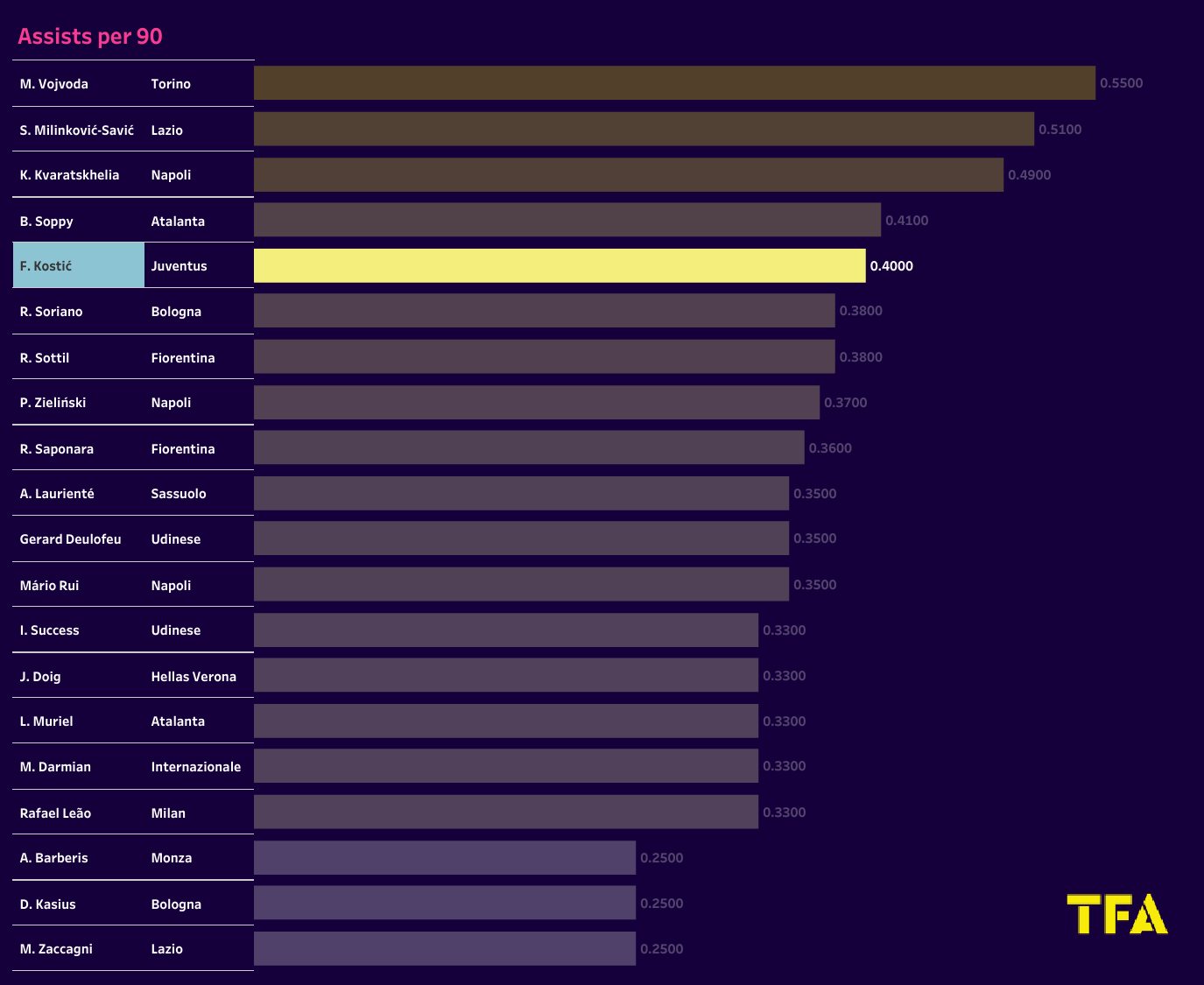 The 30-year-old Serbian has shown his top game for Juventus, providing them with five assists in 15 appearances in Serie A. The voz above depicts the statistics of Serie A players with high assists per 90 minutes. Kostic has excellent numbers and provides 0.4 assists per 90. He has made 31 key passes so far in the season and leads the chart for crucial passes in this Juventus team. 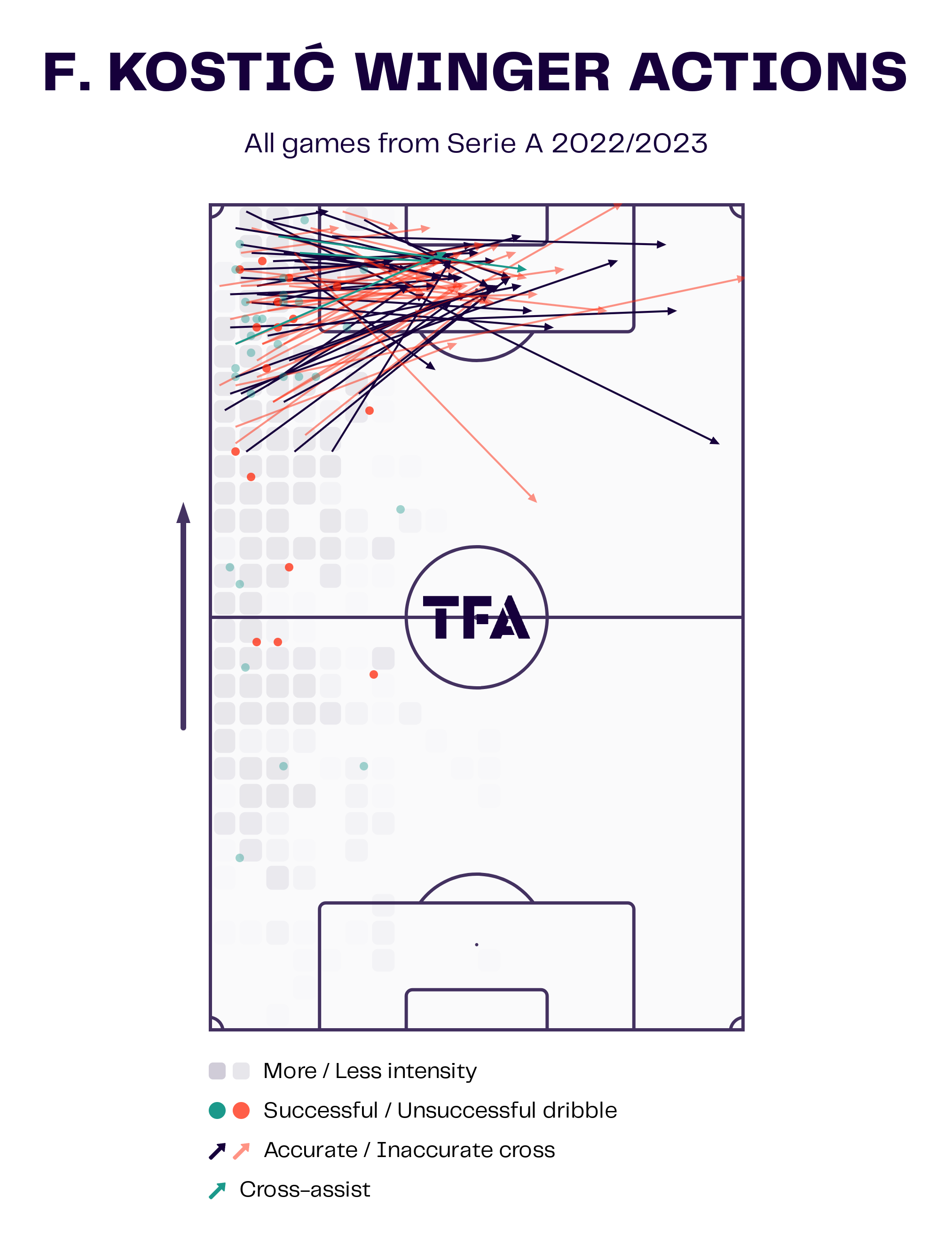 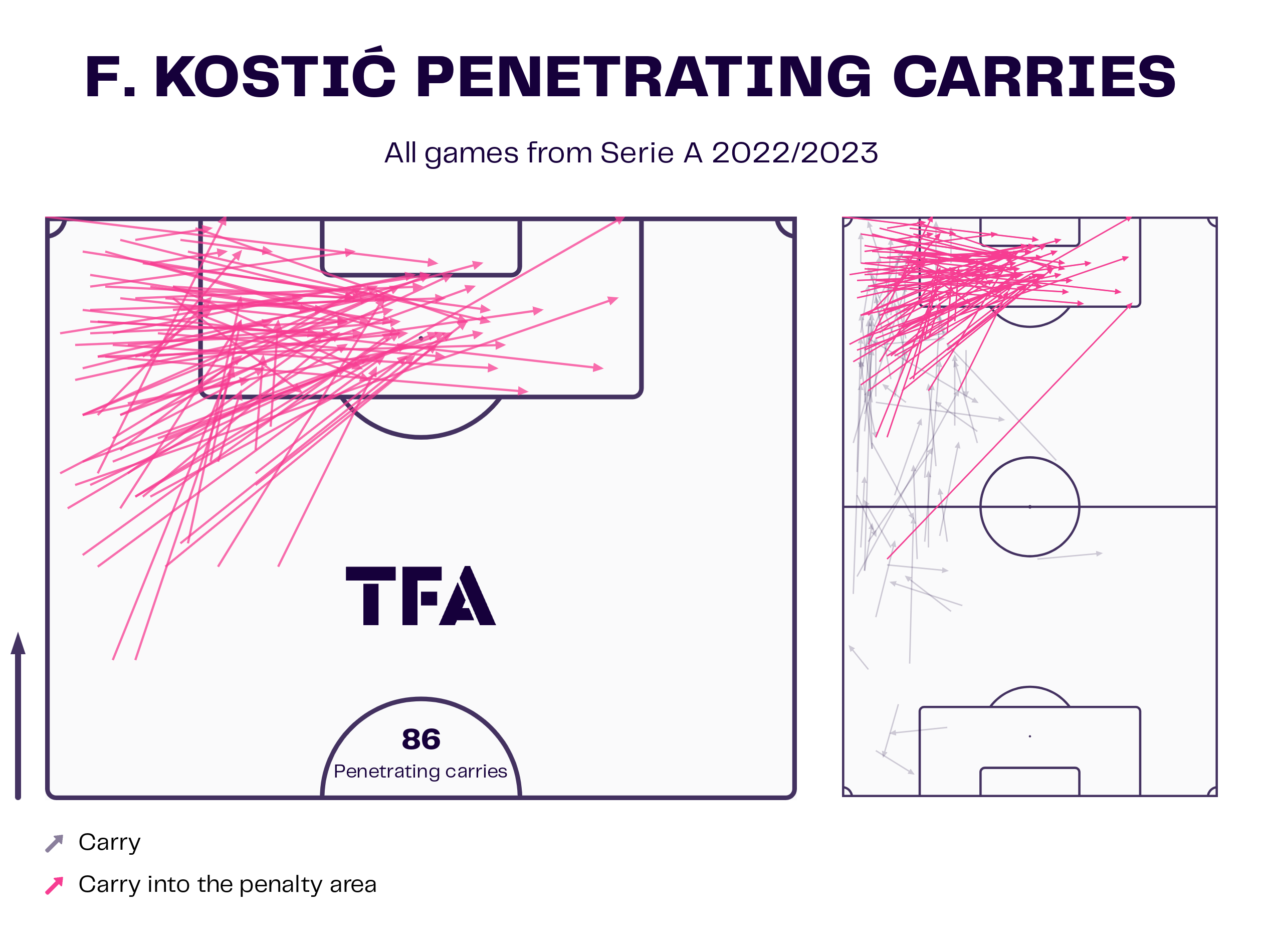 Filip Kostic is a left winger who likes to carry the ball nearby and into the penalty box whenever he is given the opportunity. He has made 86 penetrating carries in 15 appearances in Serie A this season. The 30-year-old Serbian winger averages 6.13 passes to the opponent’s penalty area and 7.48 crosses per 90 minutes.

Juventus and Massimiliano Allegri will be delighted with the performance of their summer signing, Filip Kostic. The Serbian is seen as an essential player for the current Juventus side. Kostic’s six-goal scoring contributions have contributed to Juventus’ excellent start to the Italian Serie A season. The 30-year-old experienced Serbian winger will look to maintain his excellent form when the Serie A season begins in January.