Home Analysis Under the microscope- How the Spanish forward is pushing Udinese to a... 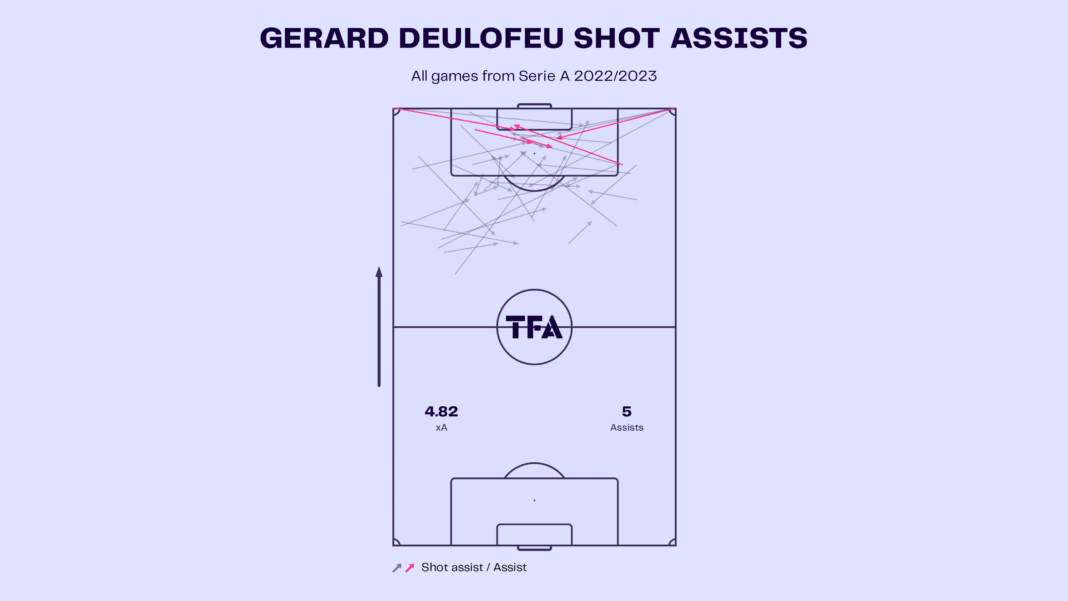 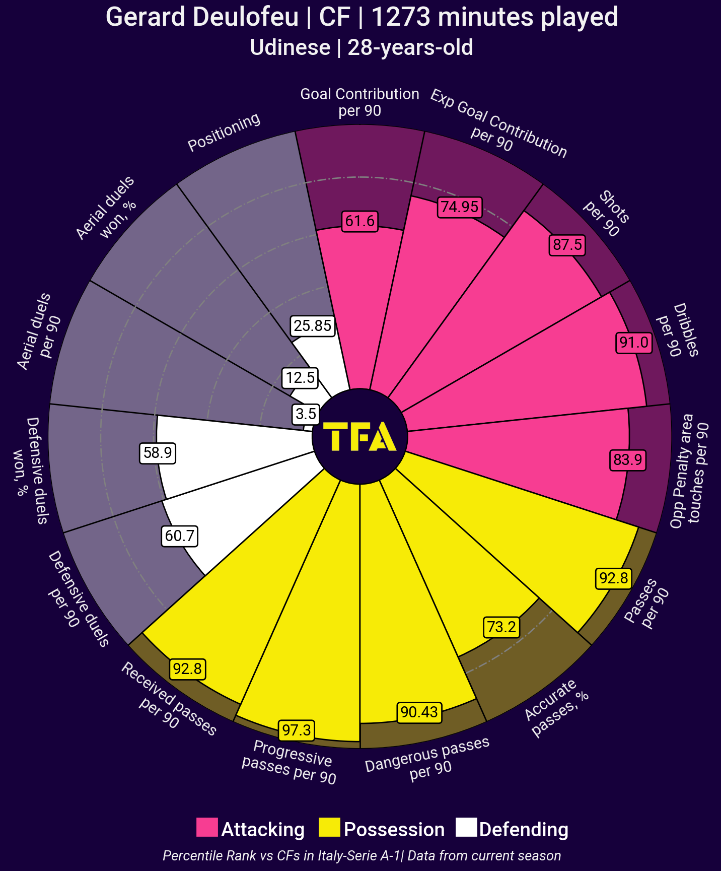 The 28-year-old Spanish forward Gerard Deulofeu has scored two crucial goals and provided six vital assists for the Udinese side in the current season of Serie A. The above viz shows the stats of the player in comparison to the other players featured as centre-forwards in Serie A this season. It can be observed that Deulofeu dominates most of the Serie A centre forwards in most of the attacking and possession stats. It is clear that Deulofeu ranks highly in progressive passes per 90 stats. Other stats where Deulofeu has done well are passes per 90, dangerous passes per 90, received passes per 90, dribbles per 90, and shots per 90. The Spanish forward has scored two goals and provided six assists in 15 Serie A appearances. He has also made the most key passes in the current Serie A season. 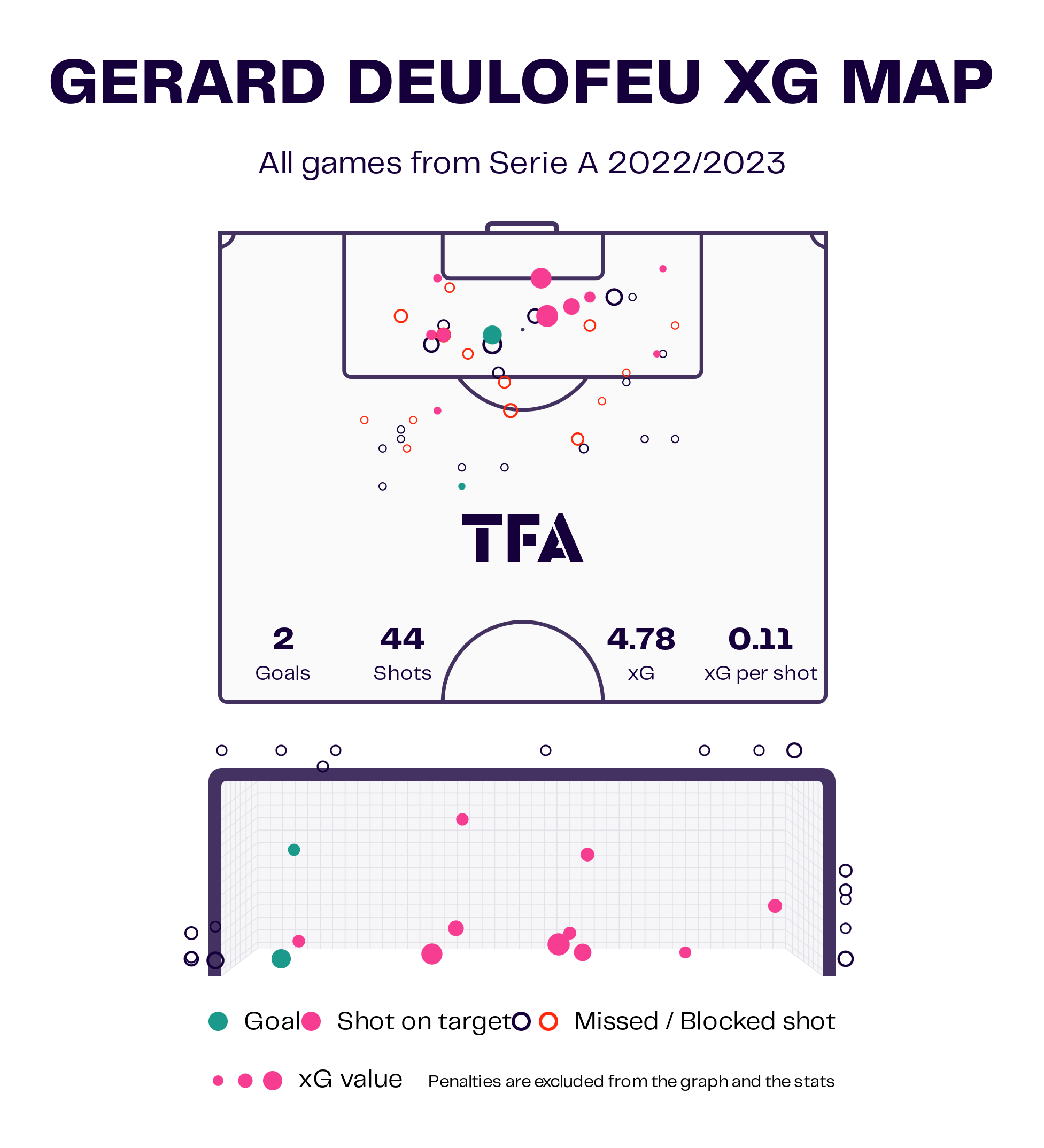 Gerard Deulofeu has added two goals to Udinese’s tally in Serie A this season. The above viz shows the shot map of the forward in the Italian Serie A. Deulofeu’s goal scored per 90 minutes is 0.15, and his goal involvement per 90 minutes is 0.6. The Spanish forward has taken 44 shots so far this season. Deulofeu has a shooting accuracy of 42.86%, and his total xG per shot is 0.11. He’s been getting into good scoring positions but hasn’t been able to convert them into goals, so he’s underperformed his xG. 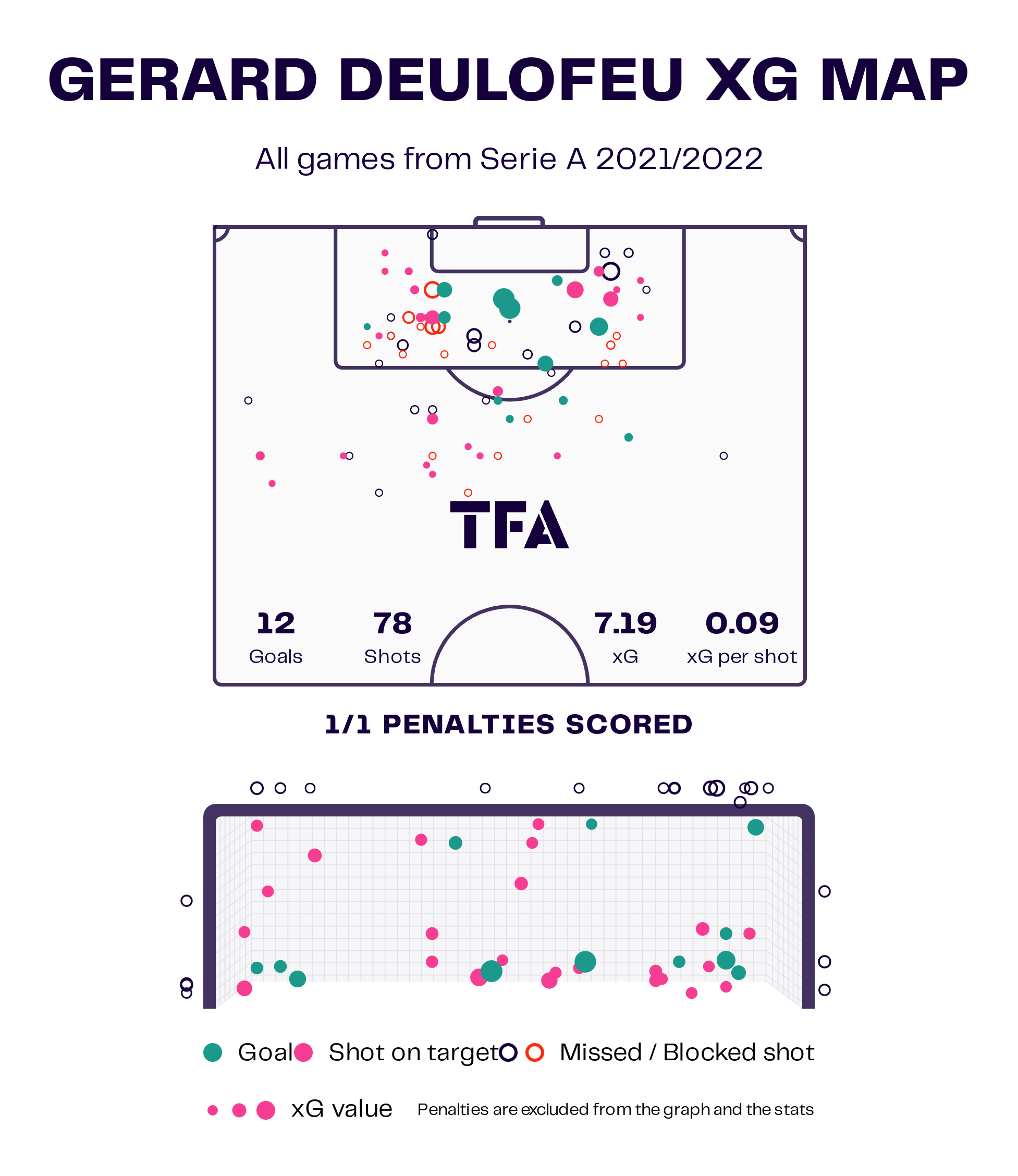 Gerard Deulofeu scored 13 goals for his Udinese side in the 2021–22 Serie A season. Deulofeu’s goal scored per 90 minutes was 0.45, and his goal involvement per 90 minutes was 0.62. He scored a goal after every 4.46 shots he took and had 1.98 shot attempts per 90 minutes. Deulofeu has only scored two goals in the current season; this shows that he needs to start finishing those big chances that he receives every game if Udinese needs to qualify for European football next season. 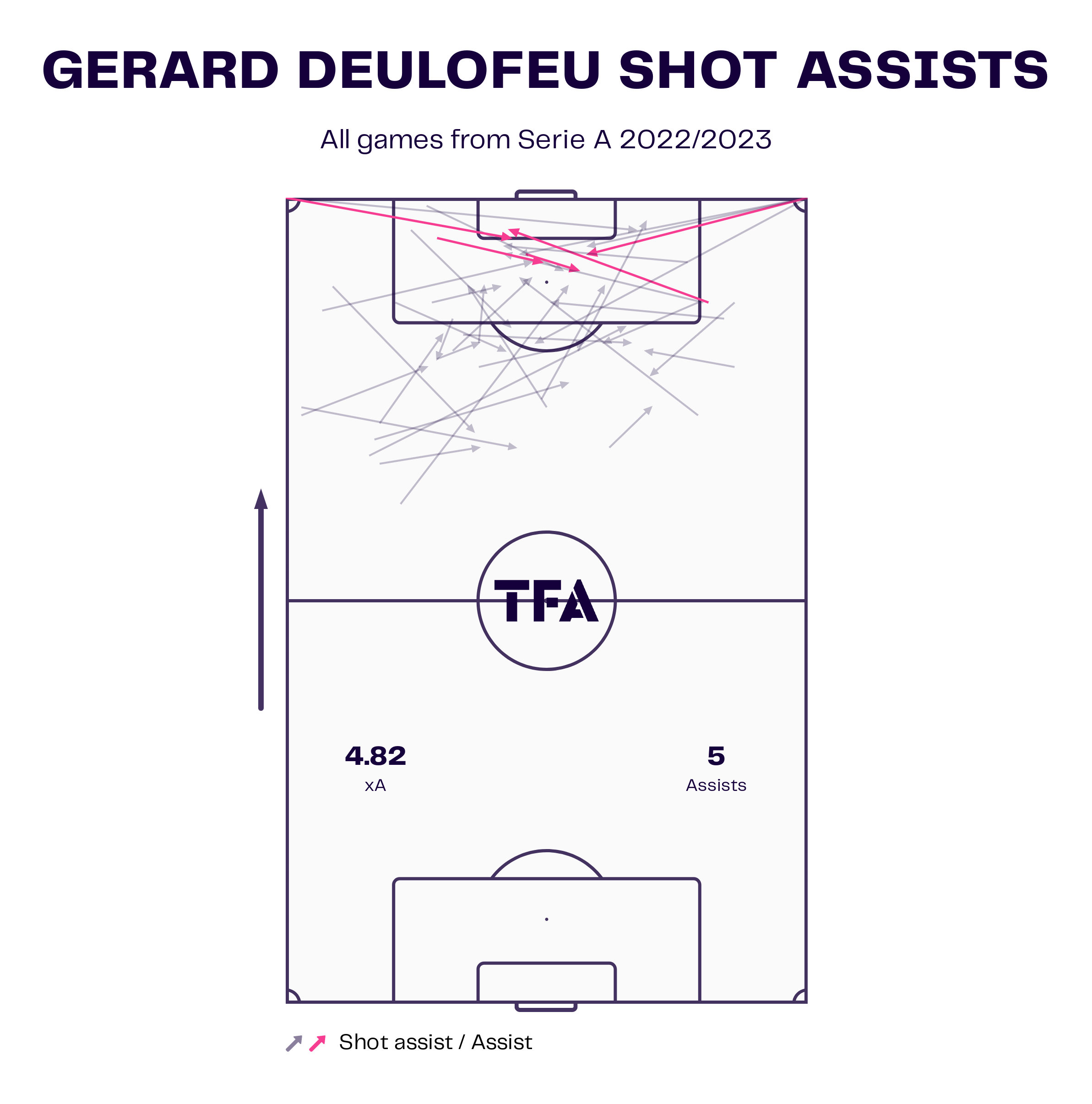 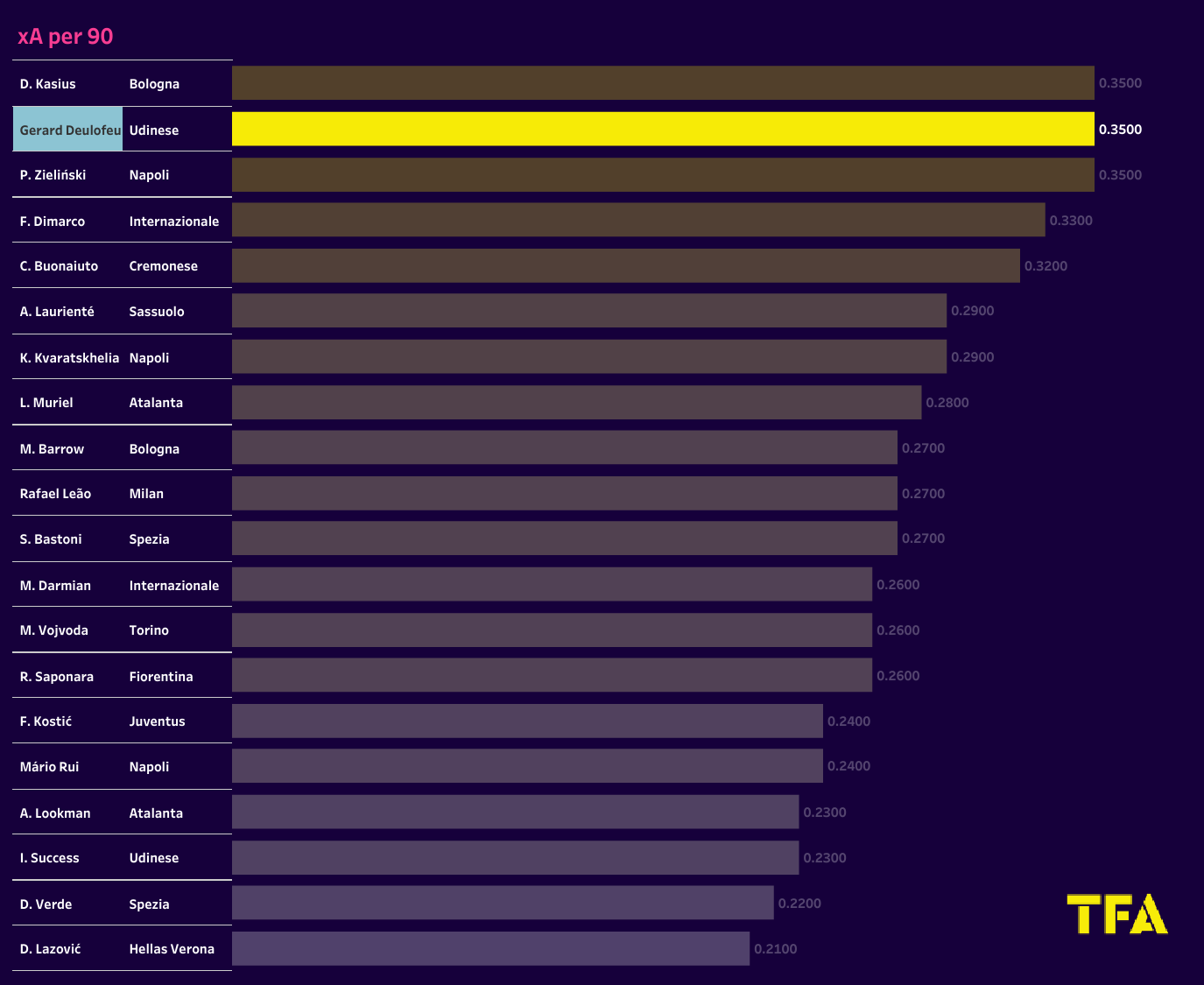 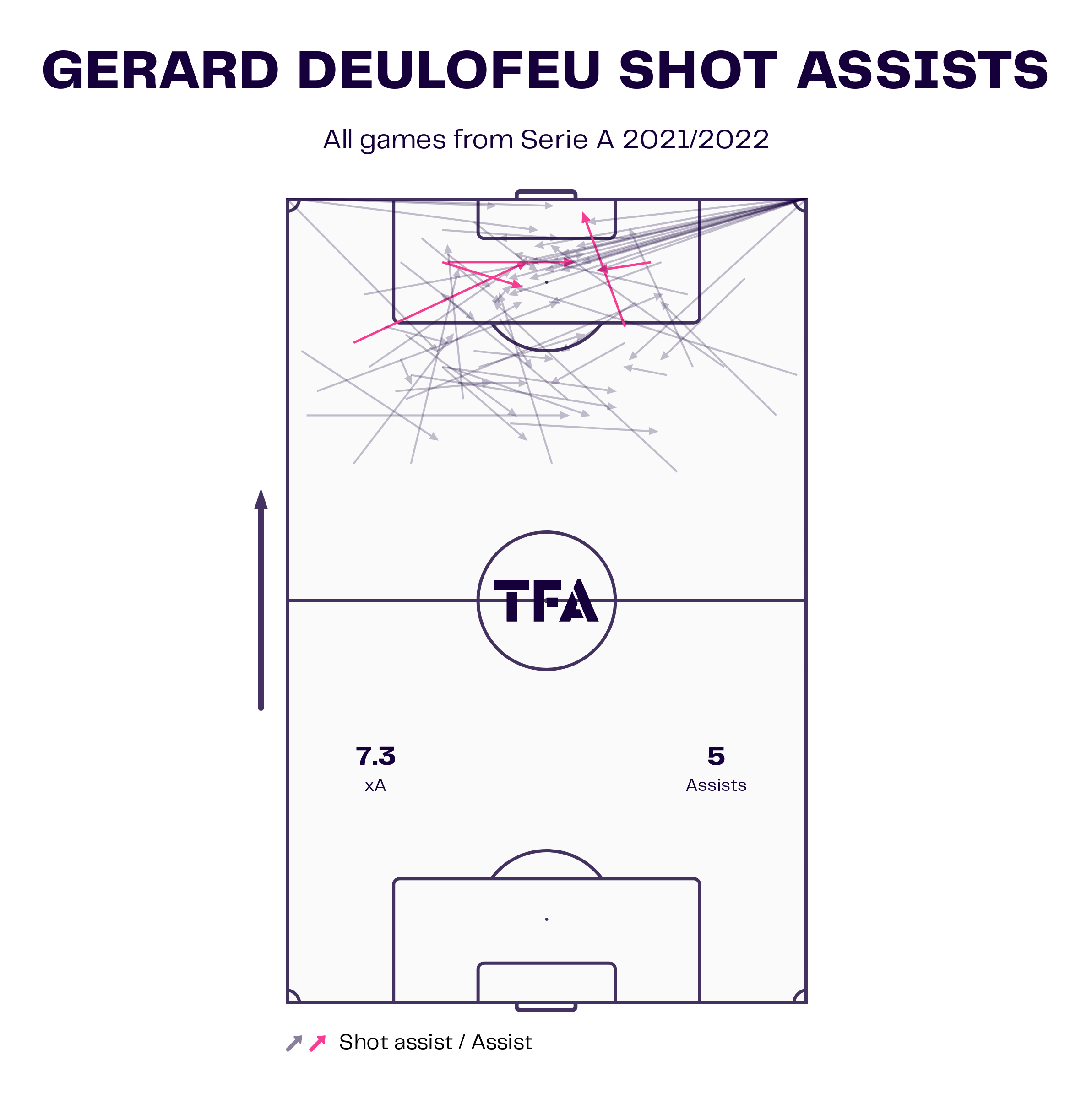 Gerard Deulofeu assisted five times for Udinese in the 2021-22 Serie A season. Last season, Deulofeu made 83 key passes and averaged 2.84 key passes per 90 minutes. Deulofeu passed the ball 28.86 times per 90 minutes, with a 78.48 passing accuracy rate. Deulofeu had an xA of 0.25 per 90 minutes. He has already broken the record of five assists he provided last season in Serie A, having already provided six assists for his Udinese teammates in the current season. The Spanish forward has improved his playmaking game and taken it to another level, as can be seen by his six crucial assists in the current Serie A season.

Udinese and Andrea Sottil will be delighted with the performance of their talisman, Gerard Deulofeu. The Spanish forward is seen as an indispensable player for the current Udinese side. Gerard Deulofeu’s eight goal contributions have contributed to Udinese’s impressive start to the Italian Serie A season. The Spanish will look to continue his form after the international break, creating and scoring goals for his team and leading from the front to help Udinese qualify for European football next season.

UEFA Champions League 2021/22: The stats behind Liverpool’s comeback vs AC...

Why Marcelo Brozovic Is Vital For Inter