This analysis of Bologna’s head coach was first featured on our network site, totalfootballanalysis.com.

Filippo Inzaghi needs no introduction to football fans across the world. The archetypal ‘poacher’ scored goals for some of Italy’s biggest clubs, won the Champions League, Serie A and most importantly the 2006 World Cup. Inzaghi was one of the greatest goalscorers of the modern era, with 313 goals in total, including 70 in European competition. That European tally is only bettered by Raul, Lionel Messi and Cristiano Ronaldo. In this tactical analysis, however, we’ll look closely at Inzaghi the coach and specifically his tactics at Bologna this season.

After such an illustrious playing career Inzaghi made the move across the touchline to start coaching. His first senior role was leading a very weak Milan squad through the 2014/15 season, where they finished tenth. Inzaghi’s contract didn’t get renewed and he resurfaced in the summer of 2016 when he took charge of ambitious Lega Pro club Venezia. Inzaghi led them to promotion in his first season and to the Serie B playoffs in the next, but Venezia lost to Palermo in the semi-finals and missed the chance to return to Serie A. Inzaghi’s stock was high in the summer though and Bologna won the race to his signature.

Inzaghi has used a 3-5-2 in each game so far at Bologna. In certain games, when things haven’t gone to plan, Inzaghi has been willing to change his setup to both 4-3-3 and 4-3-1-2. The home game against Torino is the prime example where Bologna found themselves 2-0 down but Inzaghi’s half-time change to replace central defender Danilo with central midfielder Mattias Svanberg to move into a 4-3-1-2 proved inspirational as Bologna rescued a 2-2 draw.

Compact defending with some clear issues

Bologna’s defending so far has been their strength. Despite finding themselves in 17th their defensive stats tells the story of them belonging in mid-table. Inzaghi’s men are tenth for shots conceded with an average of 14.2 shots faced. They have conceded 14 goals, with eight teams having conceded more or the same amount. Inzaghi’s defensive setup is based on a mix of positional defending and some slight man-orientations. The shape is 5-3-2 with a clear focus on defending the central areas and force opponents wide. A nice view of their shape against Inter can be seen below. 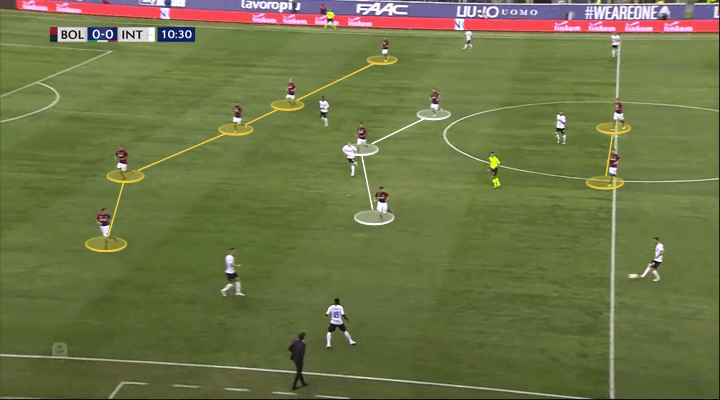 The below image comes from the away game at Juventus and again shows how Bologna prioritise defending the central spaces and leaving the wings free. Bologna rarely press high and instead opts for a more passive, positional setup where they drop back, as seen both below and above, before starting their press. 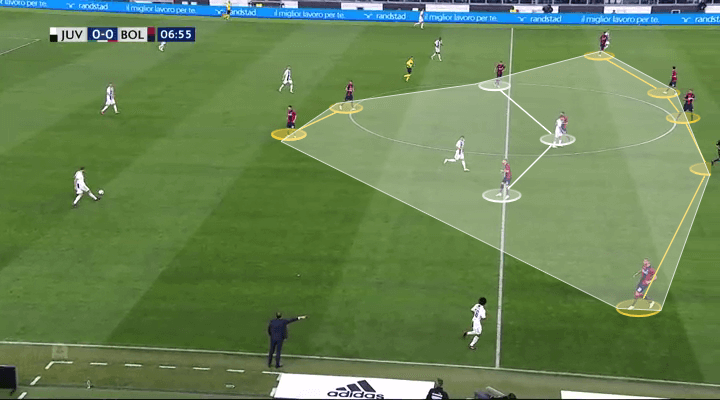 Bologna always try to keep the distances between their back-five and the midfield-three as minimal as possible. They try to squeeze the space between the lines and force opponents wide. One such example can be seen below as Bologna defend deep just outside their own penalty area. Andrea Poli presses Torino’s Iago Falque and steers him wide where left wing-back Mitchell Dijks is ready to press Torino’s wide player Lorenzo De Silvestri. 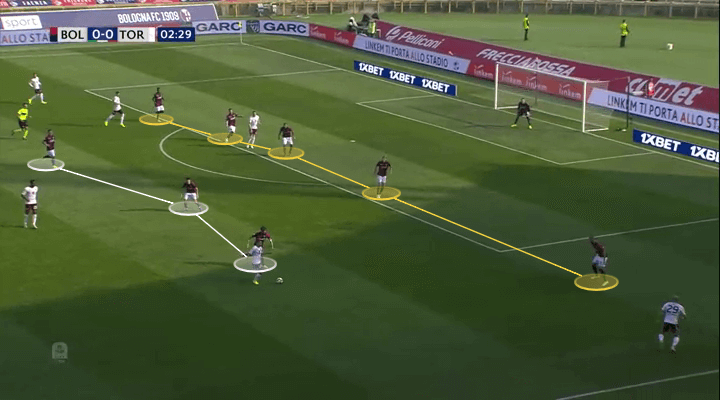 There have been some issues with Bologna’s defending though. The first notable weakness is their coverage of the half-spaces in front of back-four when the ball is in a deeper wide area for the opponent. In the below image, Torino’s right-sided central defender has stepped out with the ball. The presence of Torino’s wing-back stops the left wing-back from pressing higher. Instead, the ball near central midfielder Poli is forced to step up. The defensive midfielder, Adam Nagy, is attracted to the Torino player to his right and this opens a big space behind Poli in front of the defence. This is a recurring theme in Bologna’s games which needs fixing. 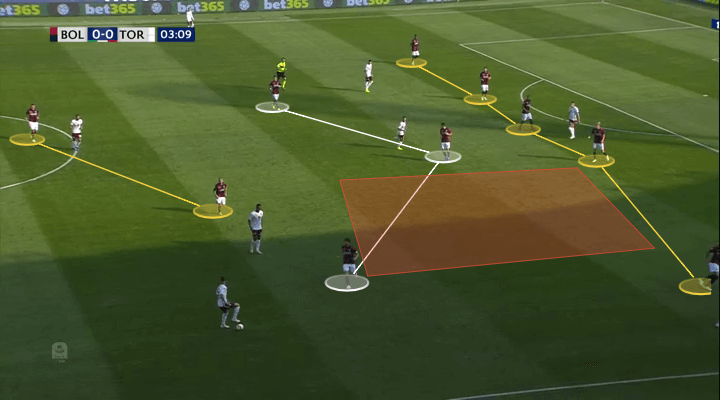 Another issue is the man-orientated defending of the two outer central defenders. In the below situation this concerns the left-sided central defender Filip Helander. He gets attracted to the dropping movement of Falque and leaves the defensive line. This creates a huge space between the central defender Danilo and the left wing-back Dijks. Nothing came of it in this instant but this is a problem Bologna have had all season as it’s difficult for the midfielders to pick up these sort of runs from their opponents as they have to watch the ball and their opponent as they make a full speed run backwards. It’s easy to switch off and look to pass on the opponent but if the ball-near central defender is gone then there’s no one to pass them on to. 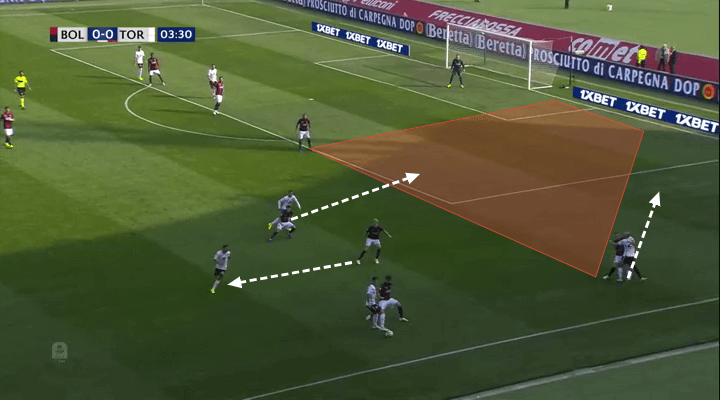 Bologna’s defending so far this season has been okay but there are some issues that Inzaghi needs to fix in order to stabilize Bologna in mid-table.

If the defending has been okay, the attacking play hasn’t reached the standards expected of a team looking to finish in the top half of the table. No team has scored fewer than Bologna’s eight (SPAL and Frosinone also have eight). Bologna average just 41.2% possession, only Parma average less. The average of 11.8 shots per game is a total only higher than Chievo and Frosinone. Of the eight goals Bologna have scored, three have come from set-pieces. That leaves five open play goals in ten matches which obviously isn’t good enough. Now let’s take a look at Inzaghi’s attacking tactics.

Unsurprisingly considering the formation, Bologna build-up with their three central defenders as the starting point. Their two wing-backs provide maximum width and the defensive midfielder Nagy (white) looks to get on the ball. They say a picture tells a thousand words and then perhaps the below image explains some of Bologna’s troubles in regards to establishing spells of possession. Nagy is totally isolated in midfield with the other two central midfielder pushing really high. The Hungarian is an excellent player but even he struggles to knit everything together without support. 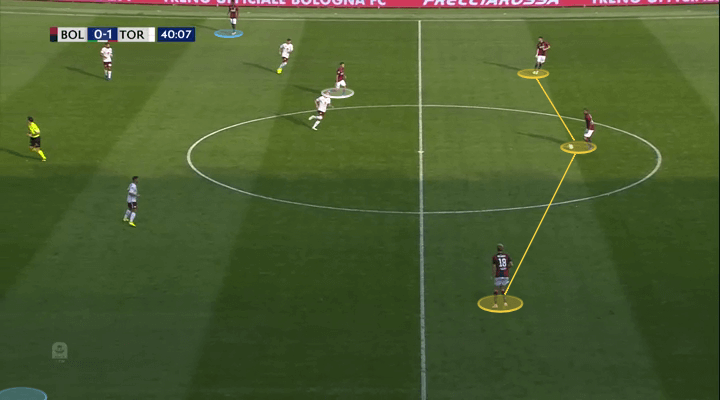 Given their build-up troubles, Bologna often look to go long to their Paraguayan target man Federico Santander. The striker has scored three goals so far and is an integral member of the team. His strength, aerial ability and hold-up play gives Bologna an option they often look to use. The below image is a good example as a ball is played high from the defence towards the front-man. Santander’s strike partner Rodrigo Palacio and midfielder Riccardo Orsolini react quickly and look to provide options for Santander to lay the ball off to. 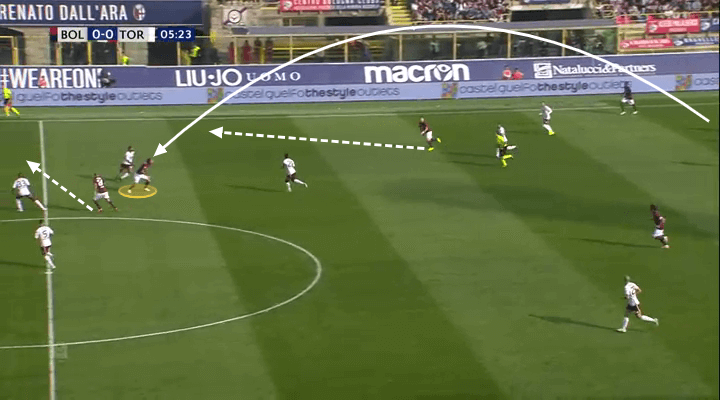 Santander’s presence also helps Bologna in terms of their final third play. Firstly, they often look for him with crosses from the wide areas. Secondly, he isolates defenders and attracts attention. The below image is the build-up for Santander’s goal against Roma. Nagy threads a ball through to the Paraguayan who holds off the defender and lays the ball off to a teammate. He then spins, gets a return pass and smashes the ball in off the crossbar. 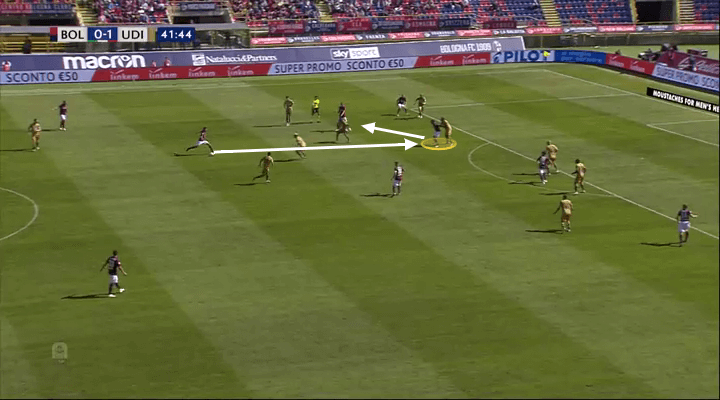 When approaching the final third and having the ball in the wide areas Bologna look to flood the penalty area with players. It’s not uncommon to see both central midfielders, the two strikers and both wing-backs moving into the box at the same time. This creates another problem as Bologna often fail to sustain their attacks and instead face counter-attacks against them. The below image highlights this. I’ve highlighted both central midfielders (yellow), both wing-backs (black) and both strikers (white). As Orsolini looks to cross the ball only the defensive midfielder Nagy (blue) is ready to win a potential second-ball. But look at that space around him outside the box. It’s impossible to cover by himself. Without sustaining attacks, especially after crosses, it’s difficult to build pressure and you run the risk of facing dangerous counter-attacks instead. 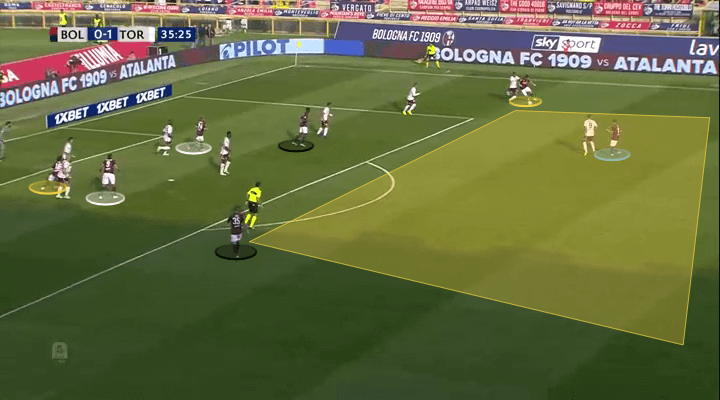 As mentioned above, Inzaghi hasn’t been afraid to change the setup in games where Bologna struggle. A telling example was the game against Torino as I discussed earlier. A more regular change to a 4-3-1-2 could potentially help Bologna improve their attacking play going forward. In that game, Inzaghi subbed one defender off at half-time to bring on a midfielder and changed the shape to 4-3-1-2 as seen below. This setup had Nagy continue as the defensive midfielder with Poli and substitute Svanberg playing either side of him. At the top of the diamond, Inzaghi placed Palacio with Orsolini joining Santander up front. I feel confident in saying that Bologna’s performance in that second half is the best they’ve played this season. 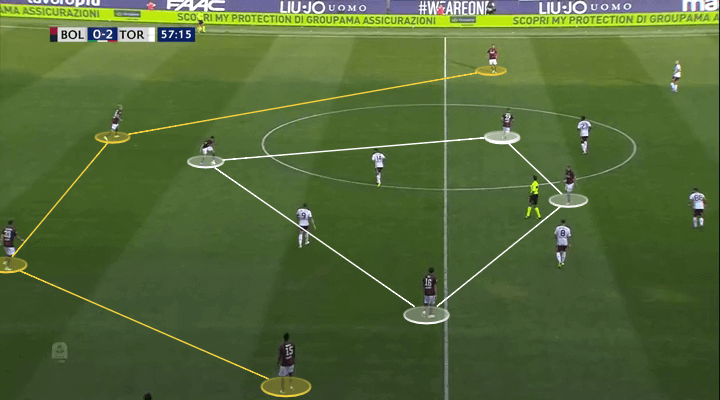 What the 4-3-1-2 gives them is an added midfield player which could be critical in helping them improve in possession while the number ten and two strikers gives them an added central presence going forward. Defensively the shape is perfect for continuing to use the principles the 5-3-2 has done; namely blocking off central access and forcing opponents wide. It remains to be seen what Inzaghi decides to do in the future, but the 4-3-1-2 provides an exciting option for the World Cup winner.

Inzaghi’s tenure at Bologna has barely started with him having only coached them in 10 games thus far. Given their position in 17th he probably needs to hit the right tune soon if he’s to keep his job for the long term. Inzaghi has shown a willingness to change his shape mid-game if the 3-5-2 isn’t working so there seems to be a chance he might make changes in both formation and personnel if they continue to fail to win. There have been glimpses of good football and if Inzaghi can fix the clear issues his side has then maybe he can be the man to take Bologna up towards the seven.

Serie A games behind closed doors until April 3 amid coronavirus...