Home Analysis Head Coach Analysis Serie A 2018/19: How will Gian Piero Ventura try to save Chievo?

This post originally featured on our analysis site for all players, coaches and matches from around the world, totalfootballanalysis.com

When Italy were knocked out of the World Cup play-offs by Sweden last year, Gian Piero Ventura’s reputation took a severe hit. Italy have hardly been much better under his replacement Roberto Mancini, but Ventura has been out in the cold in the unforgiving world of Italian football. But now, almost 11 months to the day since Italy failed to score at San Siro, Ventura is back. The 70-year-old has been appointed coach of Chievo Verona. It will be an even greater challenge keeping them in Serie A as they are still on minus points. Chievo will be hopeful the veteran can turn -1 into a new Serie A contract over the next seven months.

In this tactical analysis, I will look at how Gian Piero Ventura’s tactics will suit Chievo and if there should be hope Ventura could turn Chievo’s season around.

Ventura traditionally uses either a 3-5-2 or a 4-2-4. His style of play is extremely reminiscent of the way Antonio Conte sets his teams up. In fact, Ventura has replaced Conte twice; at Bari and with Italy. Given Chievo’s situation and the catastrophic nature of the 4-2-4 experiment with Italy, I think Ventura will go with 3-5-2. He used that shape very successfully at Torino where he enjoyed huge success to earn him the Italy job.

Ventura’s style of defence is a positionally-orientated setup. In this very organized defensive style, Ventura has launched the careers of players like Leonardo Bonucci, Andrea Ranocchia and Matteo Darmian. He wants his side to be very compact vertically and to block off the central areas for the opponent. The starting positions defensively of a Ventura team often resembles the image below. His teams don’t tend to press high but rather opt for a more passive start to their defending and drop deeper. When the ball is won they often counter-attack rapidly through the front-two. 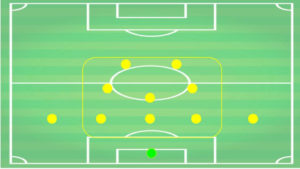 As the above image highlights Ventura, like most coaches, wants strong cover of the central areas. He wants his team to force the opponent wide where there’s obviously less chance of a good chance being created and where it’s also easier to press the opponent. 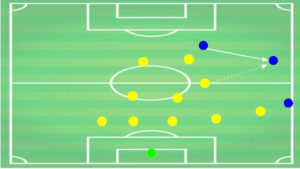 The other way Ventura has to deal with wide areas is to have his wing-back on the ball-side press higher and basically create a four-man midfield against the ball with the ball-far central midfielder basically becoming a wide midfielder defensively. With the wing-back pushing up, the three central defenders and the ball-far wing-back shift across to establish a situational back-four behind the presser. This is one of the reasons Ventura likes wide centre-backs who are comfortable defending wide areas.

Ventura’s defensive approach will be an important foundation for Chievo to create a stability and a base for the attacking approach that will take some time to instil in the players.

In possession Ventura, like Conte, is a strong advocate of playing out from the back. But just like the former Juventus coach, Ventura isn’t a possession-focused coach. Rather, he wants his side to build from the back to attract pressure which creates space in behind for his attackers to break into at pace. We can call his setup “vertical possession” as the ball should always be played forward to teammates on the move if the opportunity is there rather than recycle the ball and wait for the right time to progress.

Starting from the back, Ventura’s back-three and the defensive midfielder are key components as they are the ones starting each play. The wing-backs always hug the touchline and provide maximum width. The two central midfielders will almost exclusively position themselves quite high in either half-space with the front-two pushed high to create space centrally for the midfielders. One common pattern of Ventura’s teams can be seen below. The defensive midfielder plays a pass to a striker coming towards the ball who instantly lays it off to a forward-facing midfielder. The ball is then moved wide to the attacking wing-back who looks to get the ball into the box. 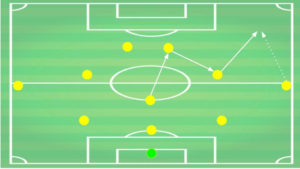 The similarities with Conte continues with Ventura’s preference to establish almost telepathic combination play between his two strikers. One of the most recurring patterns is the combination I’ve tried highlighting below. Basically, it means the strikers position themselves very closely to each other with one in front of the other. As the ball is played into the first of them he spins around and lets the ball roll to his strike partner. The ball is then instantly played back to the first striker who is now facing forward and attacking at speed. 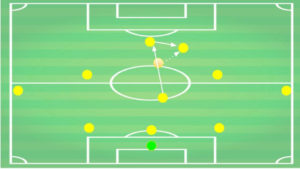 Ventura’s attacking approach won’t be picked up by the players in the first few weeks but will require time. If it does though then it will always be interesting to watch Chievo attack.

Let’s be honest, this isn’t the strongest squad Chievo has had since establishing themselves in Serie A at the start of the millennium. The goalkeeping situation remains as usual with Stefano Sorrentino the undeniable number one between the sticks.

Chievo have played with a back-four with their last two coaches Rolando Maran and Lorenzo D’Anna so it remains to be seen how they adapt to Ventura’s three-man defence. The players are there though; Nenad Tomovic played as a right-sided centre-back for Paulo Sousa at Fiorentina and is a strong contender to start in the same role for Ventura. Luca Rossettini is a good Serie A defender and should start too. That probably leaves Federico Barba as the left-sided centre-back, as it stands. The trio isn’t the strongest in the league by any stretch but with Ventura’s system, they could hopefully perform better than expected.

Energetic and attacking wing-backs are crucial to Ventura’s style of play. Fabrizio Cacciatore will likely claim one spot while the other is up for grabs between the likes of Fabio Depaoli and Pawel Jaroszynski who could get a chance. These are not names that will make opponents shiver and a definite downgrade on the duo Ventura had at Torino; Davide Zappacosta and Matteo Darmian (now at Chelsea and Manchester United respectively).

Central midfield also looks a bit bleak. I expect Emanuele Giaccherini to thrive given how well he performed under Conte’s coaching for Italy at Euro 2016. He will probably start as the left-sided central midfielder with a bit more creative license than the other midfielders. Ivan Radovanovic will be the defensive midfielder and an absolute key at the base of Chievo’s midfield. Nicola Rigoni and Joel Obi will probably fight it out for the remaining spot. Obi could also be an option as the left wing-back but he has almost exclusively played in midfield in the last few seasons.

Chievo have many potential strikers/attackers for the two forward positions. Mariusz Stepinski, Filip Djordjevic, Manuel Pucciarelli and veteran club-legend Sergio Pellissier are all good options up front. Then there’s the attacking midfielder Valter Birsa who lack a natural position in the formation but is one of Chievo’s best players and might force his way into the team anyway.

The squad is definitely not built for Ventura’s style of play but he should be able to create a solid side regardless. My guess would be this XI:

Chievo have an extremely experienced squad and they now have an equally experienced coach. They have an uphill battle to stay up but Ventura’s meticulousness could be just what’s needed in Verona. The first task is to remove the “-” in front of Chievo’s points tally to give them a fighting chance as quickly as possible. Chievo have gambled on Ventura here and Ventura has gambled on Chievo to restore some pride to his name. Let’s see what happens.