This article originally featured on totalfootballanalysis.com, our flagship analysis site coverin players, managers and matches from around the globe.

Parma returned to the big time last season after a stunning rise through the divisions. Their head coach Roberto D’Aversa brought them into the league with an impressive season in Serie B and has continued his fine work in Serie A. This has led to Parma finding themselves in ninth position. The pragmatic D’Aversa has already overseen an away win at Inter among other impressive results. In this tactical analysis, I look at his tactics which has brought Parma back with a bang.

Before going into Parma’s tactics under D’Aversa, let’s get comfortable with their squad. They have the former Napoli back-up goalkeeper Luigi Sepe between the sticks. Their defensive options include the Portuguese veteran Bruno Alves who is a mainstay in central defence alongside either the youngster Alessandro Bastoni, formerly of Atalanta, or Riccardo Gagliolo. The experienced Massimo Gobbi is one full-back option we recognise from his Fiorentina days.

Midfield options include two very good defensive midfielders in Slovenian Leo Stulac or the playmaker Matteo Scozzarella. Alongside either of those two, we often see Antonino Barilla (suitable name from the town where the pasta giants hail from), Alberto Grassi or Luca Rigoni. The front three normally includes the revitalised Gervinho, top class striker Roberto Inglese and the tricky Luca Siligardi. It’s a good squad with both experience and youth which has worked very well so far as D’Aversa has rotated quite a bit.

D’Aversa’s Parma are very pragmatic and set up in a 4-3-3 which changes to 4-4-2 or 4-5-1 in certain phases of the game. Below, I’ll look at their pressing, direct style of attack and the vital role played by Gervinho.

Parma’s pressing has stood out so far this term and they press in a very man-orientated manner. As you see below, they follow their closest opponent’s and move high when pressing. The backwards pass from Rodriguez to Zapata is the trigger for Inglese to start the pressing action. The players then follow his movement and push up. Note the position of Barilla in midfield marking Kessie. 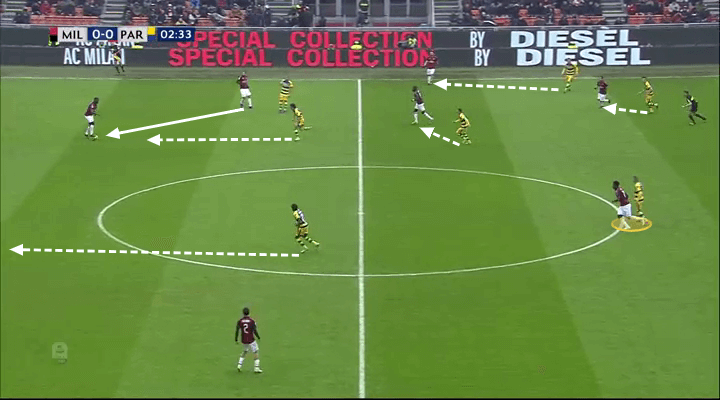 The below image is taken a few seconds after Parma started their press. The ball has gone back to Milan goalkeeper Gianluigi Donnarumma and Inglese has continued the press. Parma’s defensive midfielder Scozzarella can now be seen marking Bakayoko just outside Milan’s penalty area. This is an example of how man-orientated and aggressive Parma are when pressing. In the previous image, I highlighted Barilla marking Kessie in midfield and now I’ve highlighted how Parma allow Donnarumma to play the risky chipped pass into the unmarked full-back, Calabria. As the ball travels, Barilla leaves Kessie and looks to close down Calabria before the ball reaches him. As he does, Scozzarella then drops in and marks Kessie instead of Bakayoko. 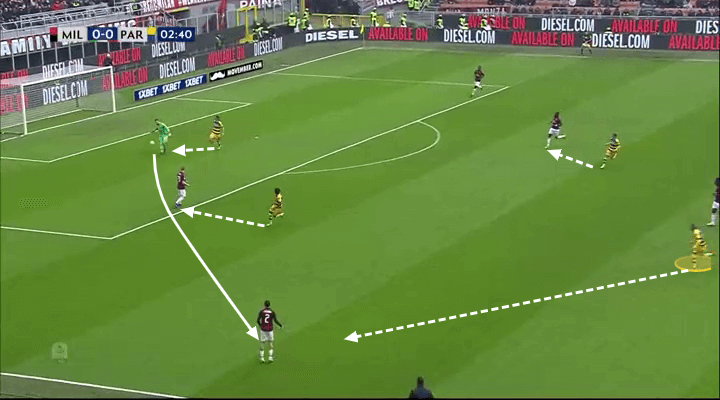 The pressing actions often come from triggers like back-passes as highlighted in the discussed scene above. Otherwise, Parma normally move into a 4-4-2 when defending. We can see this shape in the image below with Gervinho defending as a striker rather than as a winger. 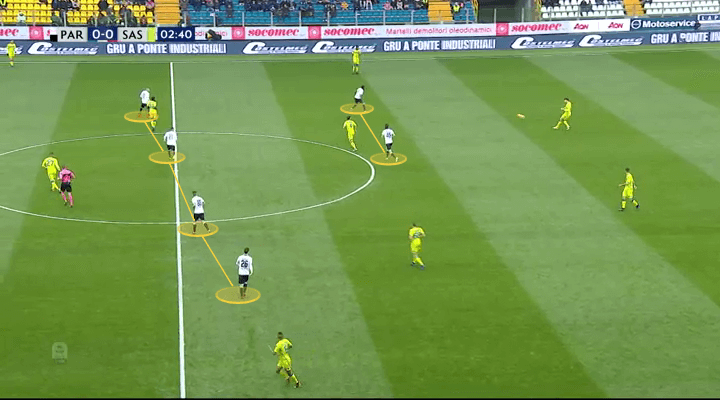 This means the left-sided central midfielder in the three-man midfield, most often Barilla has to cover the wide area Gervinho vacates when moving higher. We’ll look closer at why Gervinho picks up that position defensively later on in this analysis. The 4-4-2 shape changes again when Parma defend deeper. This largely has to do with the positions of the midfielder’s as they change from man-orientated defending in the upper two-thirds of the pitch when they enter their own third. Then they act more zonally and look to close off the centre as highlighted below. 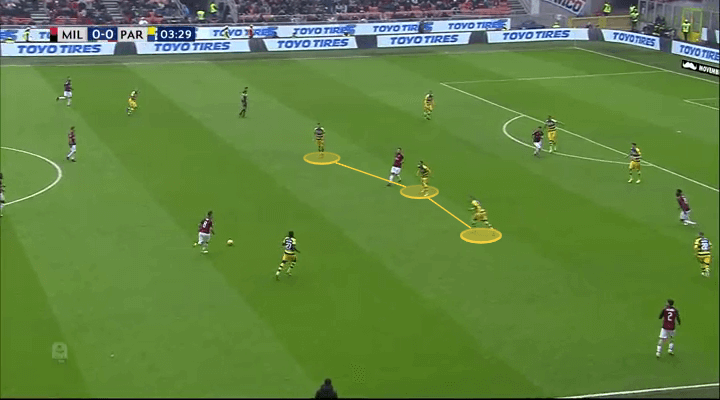 Gervinho also drops back into a normal winger role in Parma’s defensive third as the shape moves into a 4-5-1 as seen below. This helps Parma achieve horizontal as well as vertical compactness and access to the full width of the pitch when defending deeper. 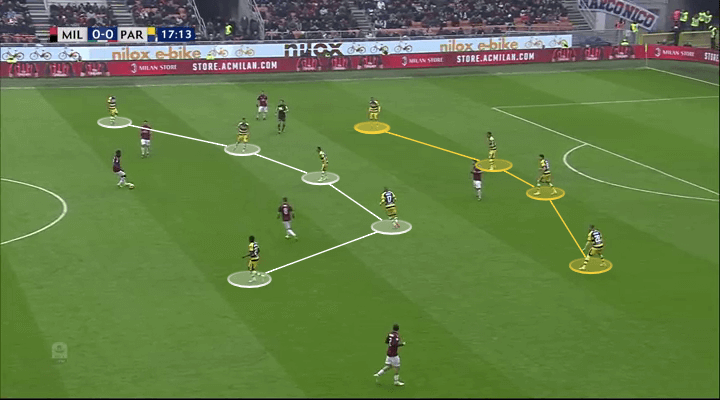 Parma’s aggressive man-orientated press is one of the reason’s they are so difficult to play against, but they don’t always press. Instead, they’re also happy to sit back and soak up pressure before looking to hit the opponents on the break. This is a testament to the impressive coaching of D’Aversa who has created such a flexible and solid defence.

As mentioned earlier, Parma are very direct when attacking. They often look to build from the back but the target is to get the ball into their attackers as quickly as possible. The midfielders and full-backs also join in when attacking and make it hard to resist Parma for 90 minutes as they always have players moving forward. The initial attacking structure can be seen below with the back-four quite deep in the build-up phase with only the defensive midfielder coming towards the ball. The other two midfielders move higher up. 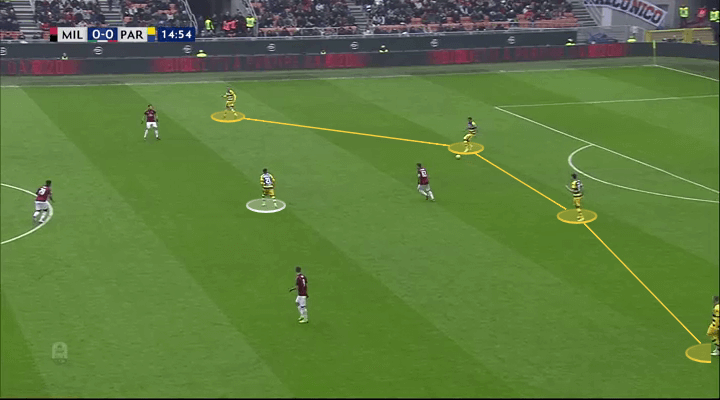 Parma also use balancing movements in their attacking structure, most often between Gervinho and Barilla. This means Gervinho often moves into central areas between the lines while Barilla balances the Ivorian’s movement by moving into the wide area vacated by Gervinho’s inverted movement. In this way, as highlighted below, Parma retain their 4-3-3 shape in attack but create confusion for the opposition when the players change positions. 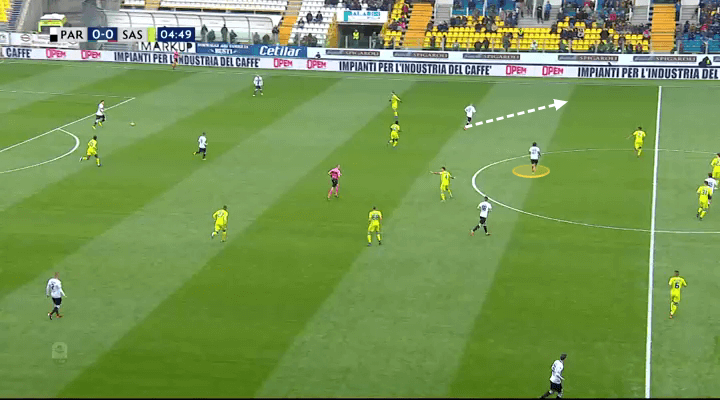 Inglese, as the central striker, has a key role in Parma’s possession play as he always provides depth within their shape. It’s clear Parma have a method to progress the ball by playing longer passes into the Italian who then lays it off to onrushing midfielders facing forward. One such example can be seen below as the ball is played forward from the right-back Iacoponi to the striker. We can also see their 4-3-3 shape. 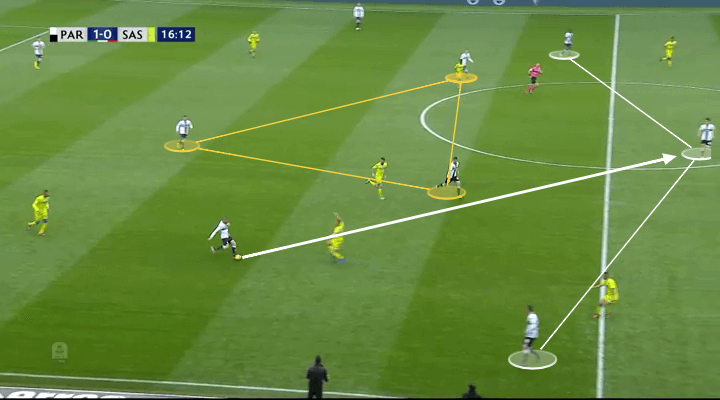 Apart from his role as a target man in the build-up play, Inglese is also vital with his ability to stretch defences. His aim is always to run into the space behind the defensive line and Parma excel in finding this space. This is what I mean about their directness. They play the ball in-behind early and Inglese is always on the move. The image below highlights his goal at Genoa. Barilla plays a ball over the defence into the path of Inglese who scores with a looping header. But we can also see Siligardi making a run in-behind and these runs from the attackers and midfielders are crucial. It’s great to see a team which so obviously aims to have players attacking the space in-behind defences. 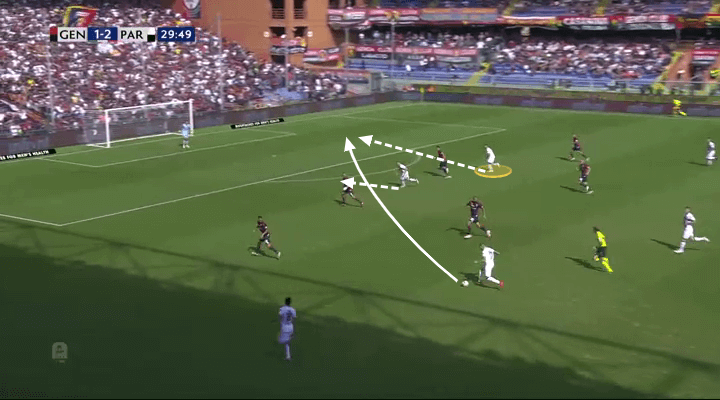 Below is another goal from Inglese. The method is the same. A midfielder facing forward is the signal for Inglese to run into depth and he’s put through and then scores superbly after turning a defender. 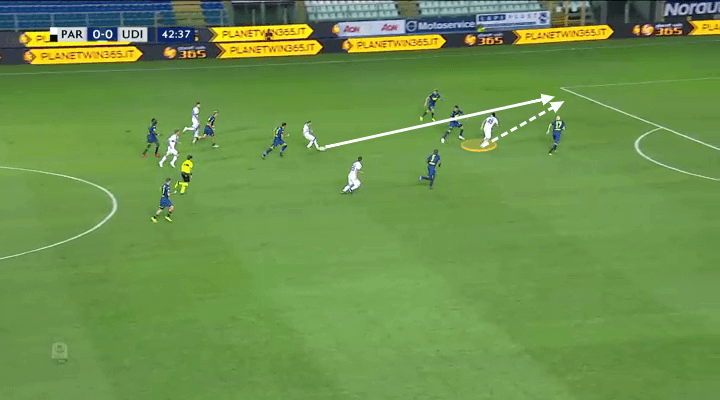 All teams want to attack the space Parma likes, but it’s not often we see teams who so clearly look to exploit every time they have the ball in control and midfielders facing forward. The timing is also very good most times which signals this is something they work on a lot.

If they attack down the wings Parma use crosses to create chances. When the time comes to cross the ball it’s not rare to see at least four players attack the central areas. The full-backs often put the crosses in with both wingers moving centrally when reaching the final third. The image below highlights the goal against Juventus when Gobbi’s cross reaches Gervinho in the box. 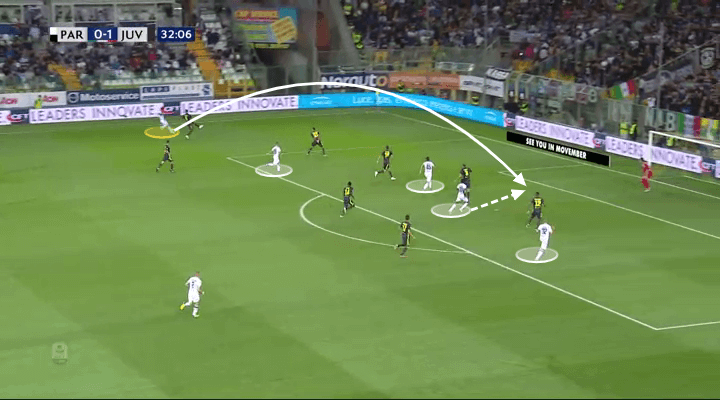 Parma also excels in attacking transition. Their counter-attacking is rapid with the pace and ball-carrying ability of Inglese, Gervinho or Siligardi. The two different counters below highlights this and the very clear method of playing to players on the move when countering.

First, we see how Parma win the ball in midfield. Instantly the ball is played to Inglese who lays it off to the winger Di Gaudio who is on the move forward. We can see that Parma start in a 3 vs 3 situation against Inter’s defenders. 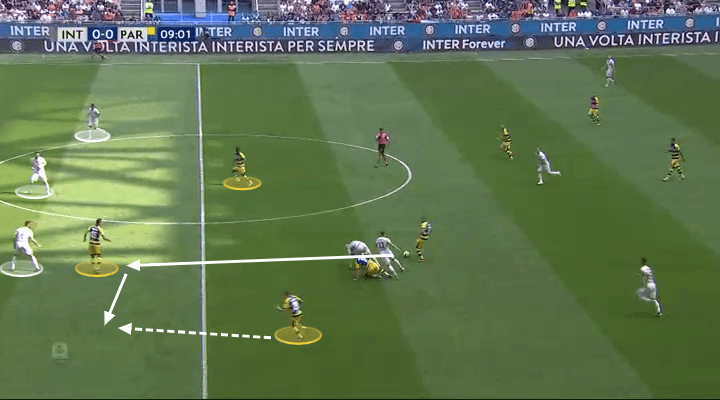 A few seconds later and now Di Gaudio releases the ball into the path of the running Inglese, who does all he can to move across the space behind De Vrij. He succeeds but the shot is saved on this occasion. 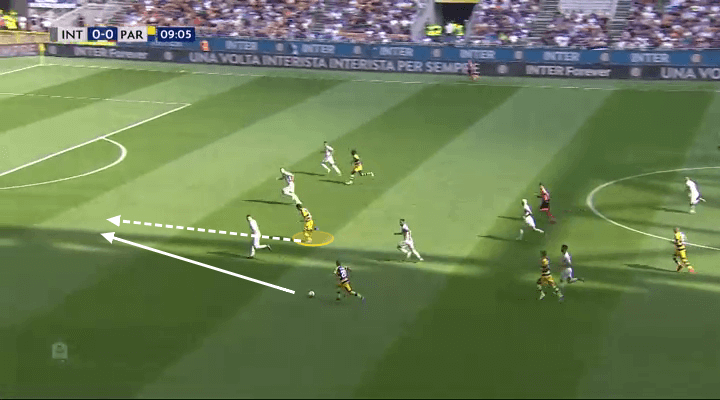 Below is another example. We see Gervinho picking up the ball on the move forward. He’s quickly joined by the left-back Dimarco. 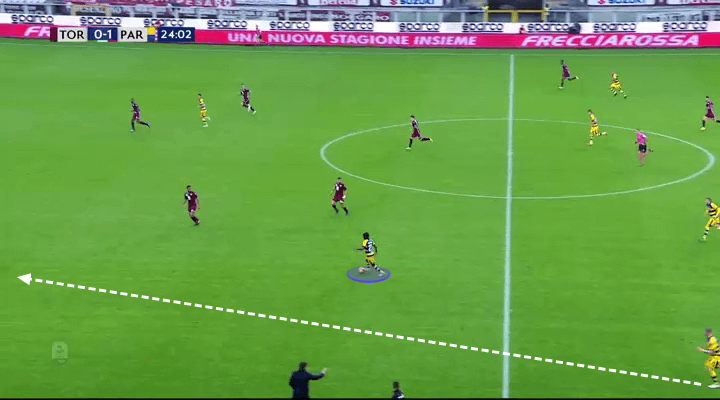 Gervinho has now released the full-back and he plays a brilliant first-time cross in towards Inglese, who beats the defender to the ball and pokes the ball into the net brilliantly. 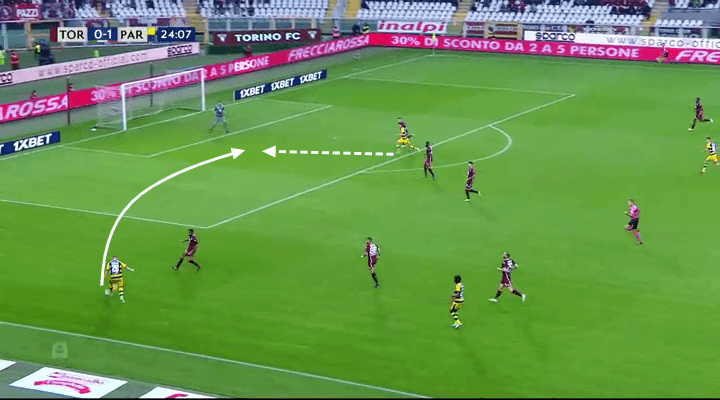 Parma are very direct in their attacking and their counter-attacks are ruthlessly effective. This makes them difficult to prepare for as they can create goals from different phases of the game and are also dangerous from set-pieces. The pragmatic D’Aversa has found a great attacking balance too.

Gervinho returned to European football this summer and has been absolutely brilliant for Parma so far. He is important with his ability to carry the ball through the pitch in the often large spaces Parma often have available to attack into. I’ve already highlighted the position he defends in, as part of a front-two, and the reason is that he’s so devastating on the counter-attack.

As we see below, Gervinho can often pick up the ball between the lines when starting in a central role as the ball is won. This gives him the opportunity to instantly attack the opponent’s defence. Below, he has enough space either side of the defender to either go to his left or his right. 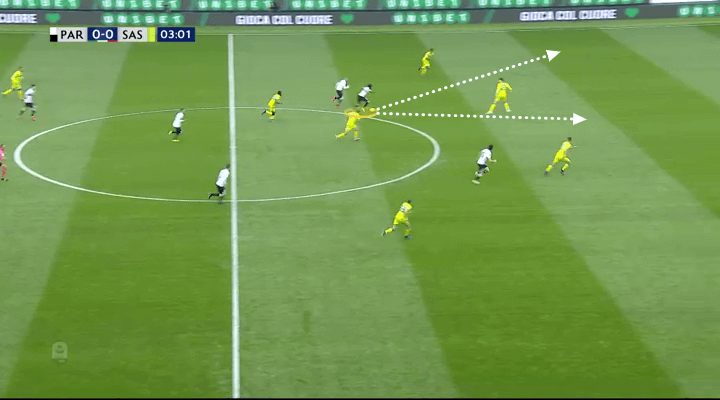 Gervinho is also vital due to his pace when he makes runs in-behind. As mentioned, Parma look to play the ball into deep early and then they need players making those runs. Gervinho often does. He comes inside, alongside Inglese and gives the opponent’s defenders headaches with his running. One example is the situation below when he is played through on goal. He’s also been very clinical this season and scored some big goals already. 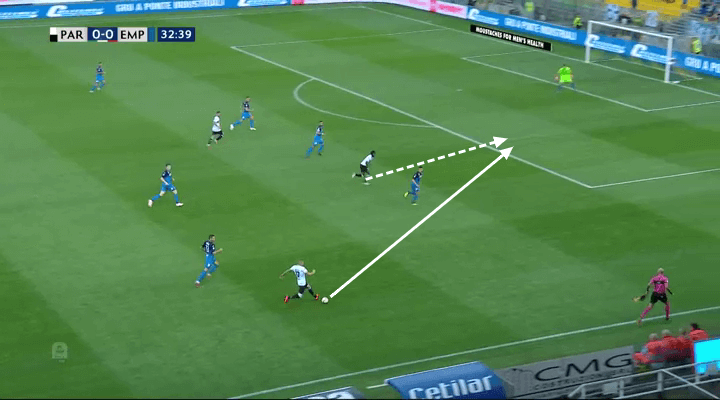 Roberto D’Aversa’s has created a very pragmatic Parma which get results even when not playing at their best. When at their highest level, they are very good in possession with a very vertical focus and often exploit the space behind the opponent’s defensive line. They’re also very solid defensively and difficult to break down. It remains to be seen if they can keep these performances going but if they can they’ll safely secure another season in the top flight.

If you love tactical analysis, then you’ll love the digital magazines from totalfootballanalysis.com – a guaranteed 100+ pages of pure tactical analysis covering topics from the Premier League, Serie A, La Liga, Bundesliga and many, many more. Get your copy of November’s issue for just £4.99 here or preorder the first of TWO December issues right here.

Sign him up: Sandro Tonali is just what Inter need

Derby di Milano: A look back at the last four encounters...