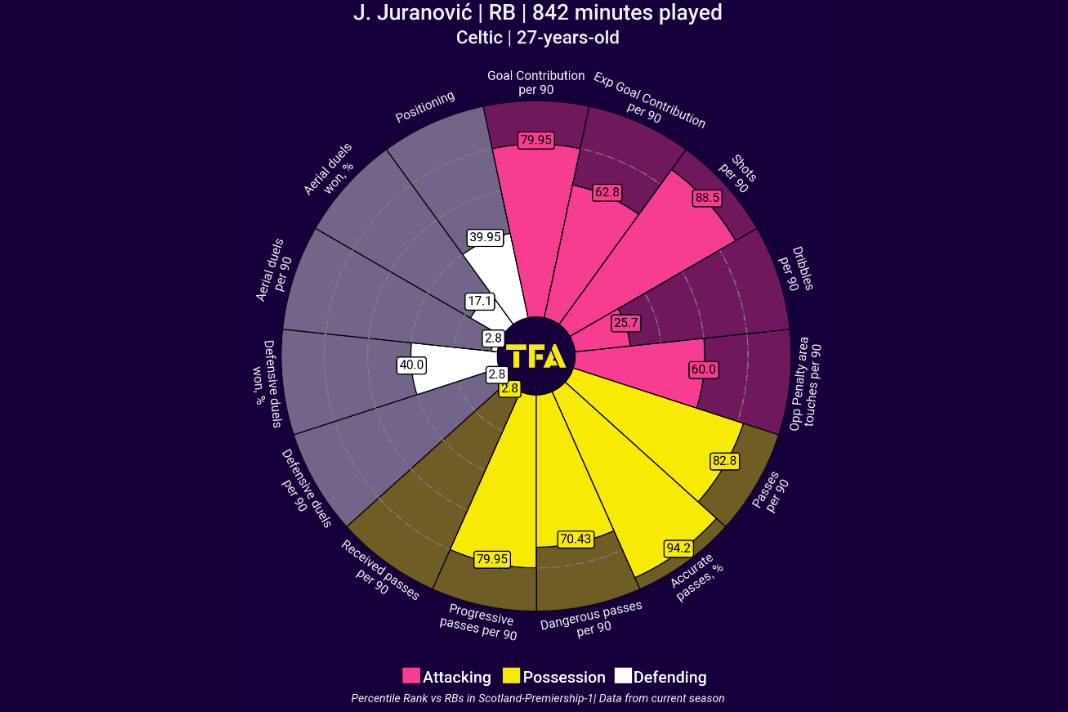 One player who has been a significant performer for Celtic in the Scottish Premiership is 27-year-old Croatian defender Josip Juranovic. The defender has performed well and impressed the scouts of various big European clubs with his performance in the Scottish Premiership and the 2022 Qatar World Cup this season. He started six games as a right-back for the Croatian side, which finished as the second runner-up in the 2022 Qatar World Cup. During the Qatar World Cup, Juranovic showed off a lot of his talent with his possession, passing, and defensive qualities. The Croatian defender has been linked with a move to Juventus, Roma, and Monza. Serie A side Juventus will look to sign the defender, and here are some stats that show why the Italian giants are looking to sign him. 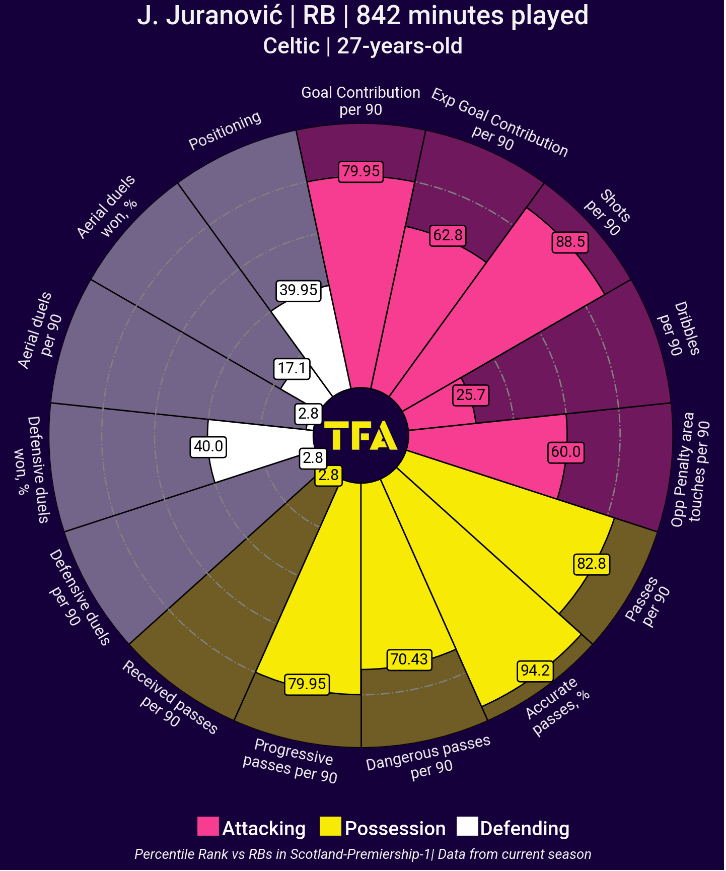 Josip Juranovic operates as a right-back from the right side of the defence. Juranovic has been an integral part of this Celtic side. This season, the Croatian has made nine appearances in the Scottish Premiership and contributed one goal and one assist from the right-back position. The above viz shows the stats of the player in comparison to the other players featured as right-backs in the Scottish Premiership this season. Juranovic has struggled to put up numbers in the defence department. It can be observed that Juranovic has been dominant in terms of accuracy. Other statistics in which he excels include shots per 90, passes per 90, goal contribution per 90, and progressive passes per 90. 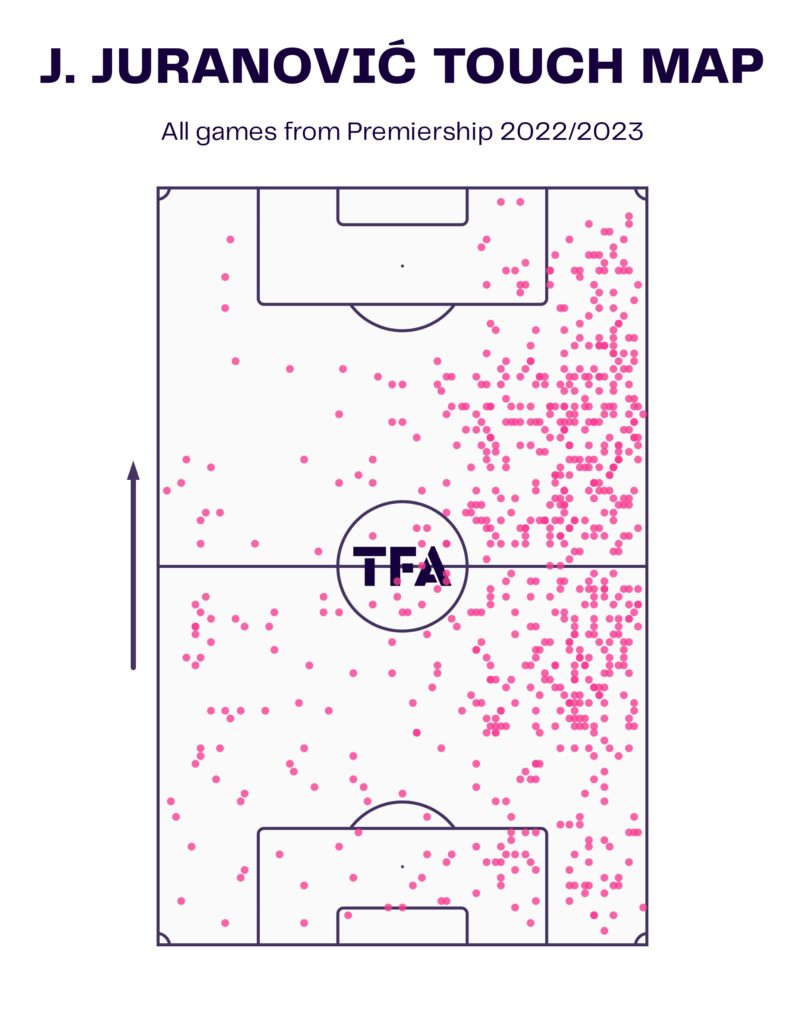 Josip Juranovic is a defender who likes to make a lot of offensive runs from the right-back position. He wants to provide an attacking option for Ange Postecoglou’s Celtic, as he likes to get into the box and even creates chances for other Celtic attackers and midfielders to score. Juranovic has made 13 key passes this season. The Croatian defender passes the ball around 55.15 times per 90, with an accuracy rate of 84.1%. He provides 1.18 shot assists per 90 minutes and makes 0.96 touches in the penalty area per 90 minutes. The Croatian defender provides 0.11 assists per 90 minutes and makes 2.46 progressive runs per 90 minutes. 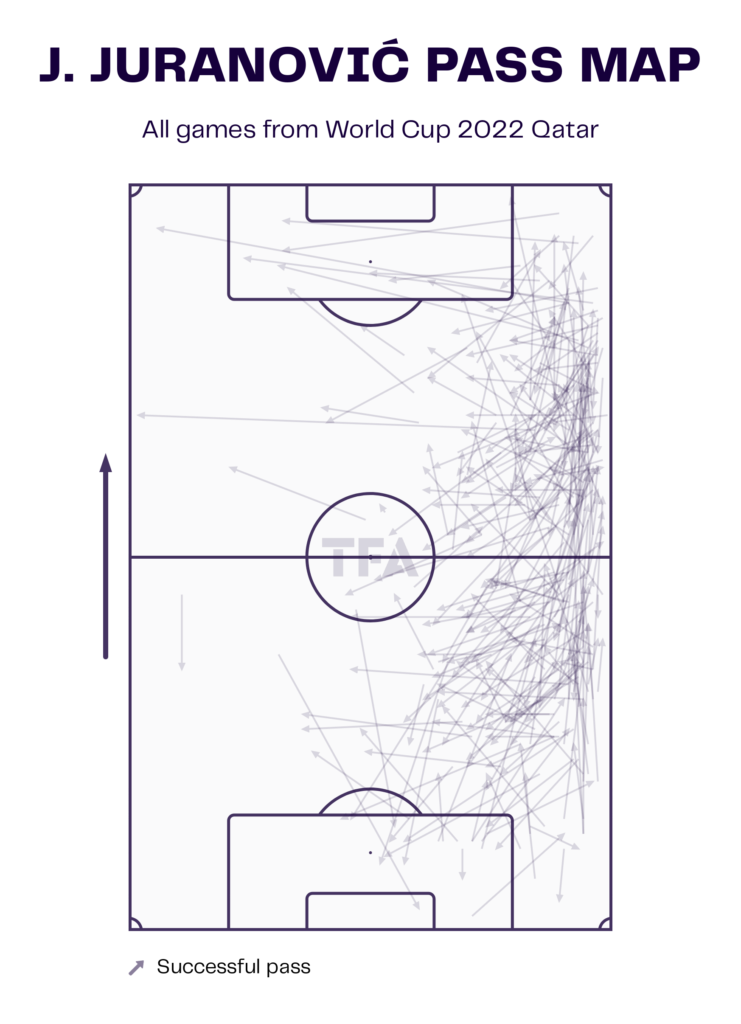 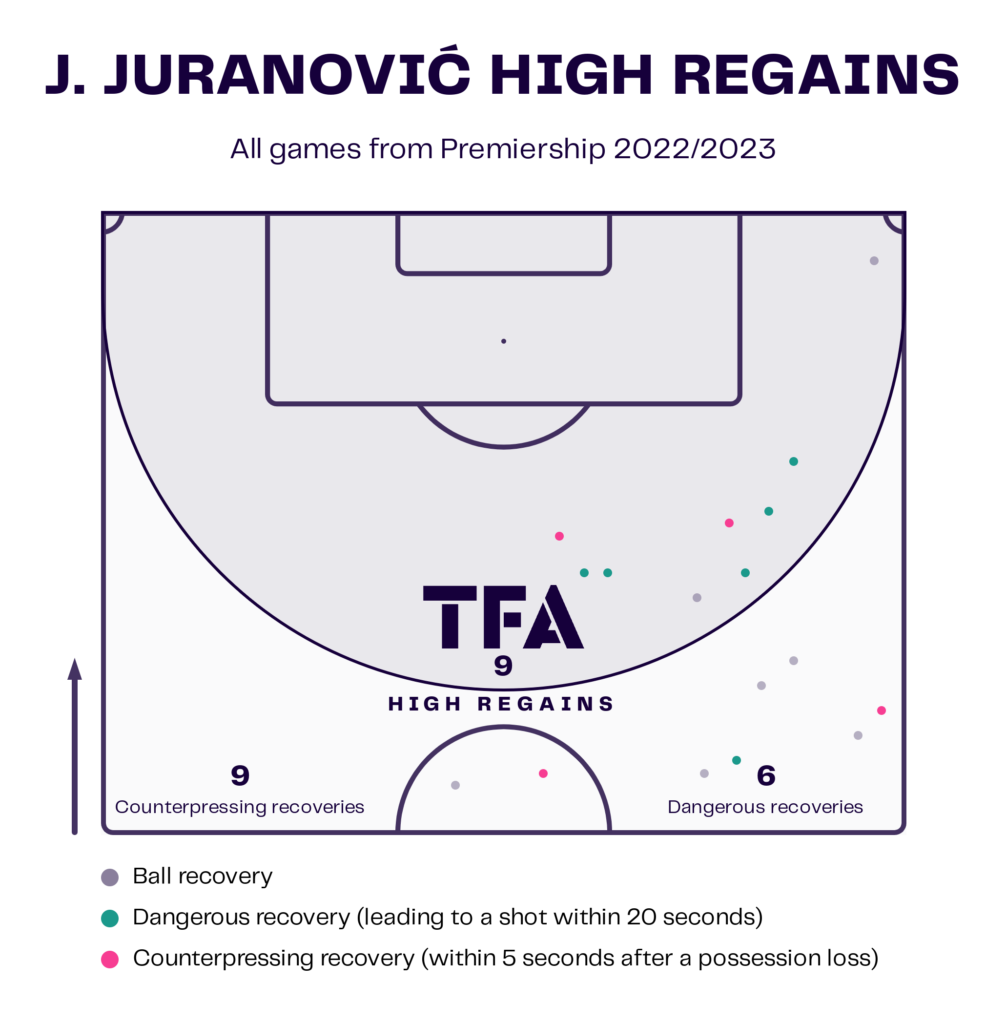 Josip Juranovic has worked hard to recover the ball for Celtic in dangerous areas. This season, Juranovic has managed nine regains in the final third. Six of these nine recoveries have been dangerous and led to a shot within the next 20 seconds of the recovery. The Croatian defender has made nine counter-pressing recoveries in the Scottish Premiership. This season, he has attempted 94 recoveries for the Celtic defence. 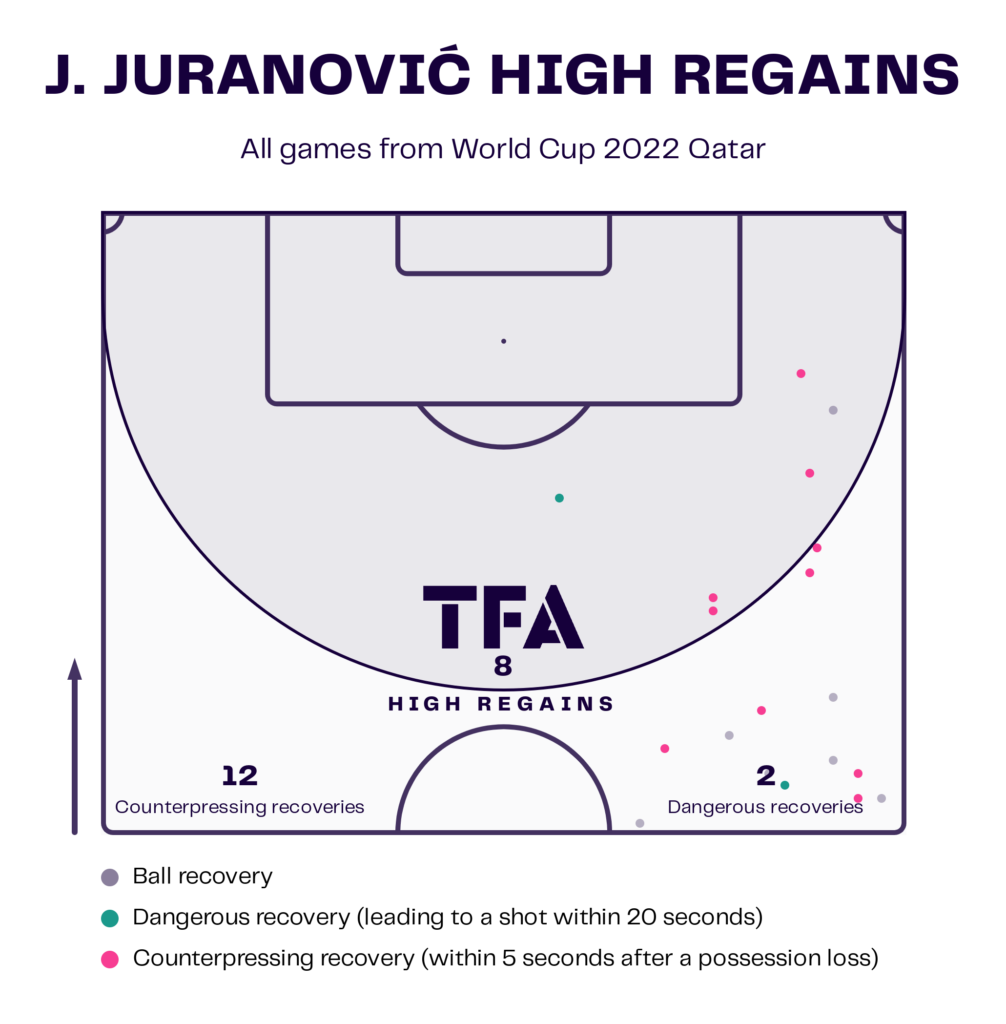 Josip Juranovic has worked hard to recover the ball for Croatia in dangerous areas. This season, Juranovic has managed eight regains in the final third. Two of these eight recoveries have been dangerous and led to a shot within the next 20 seconds of the recovery. The Croatian defender has made 12 counter-pressing recoveries in the 2022 Qatar World Cup. In the World Cup, he attempted 60 recoveries for the Croatian defence.

Whom would Juranovic Replace? 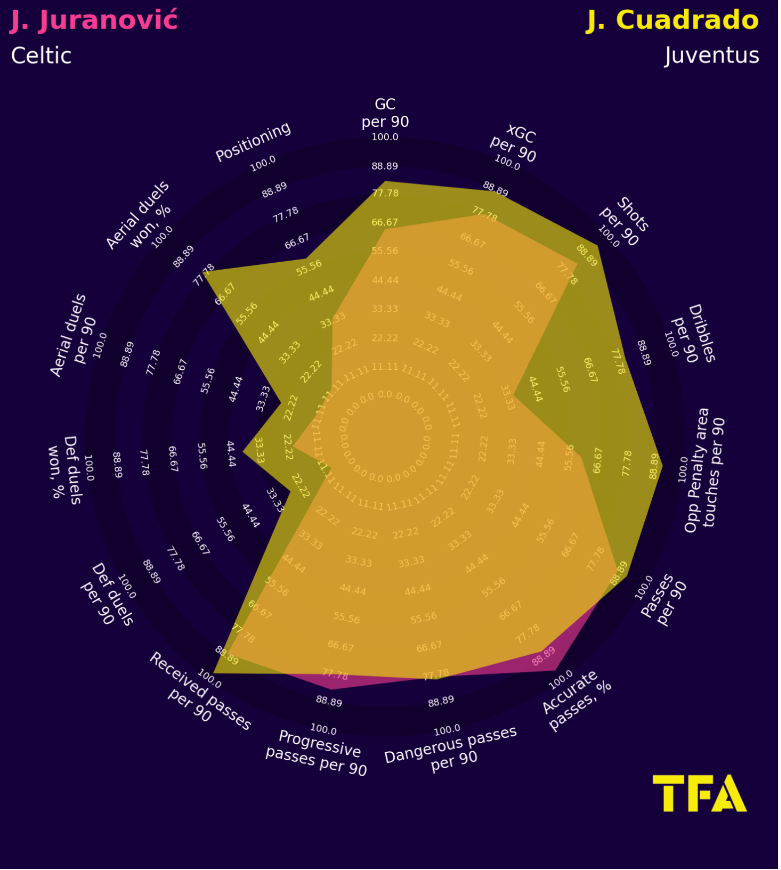 Josip Juranovic might replace the 34-year-old Colombian superstar Juan Cuadrado as a squad player and a backup option for Juventus’ defence. Juan Cuadrado outperforms Juranovic in nearly every game stat and department. Juranovic outperforms Cuadrado in progressive passes per 90 and accurate passes (%). Juranovic is only 28 years old and has young legs, which might force Juventus to play him ahead of Cuadrado if he moves to the Juventus side in the January transfer window.

Josip Juranovic will provide Juventus with a much-needed attacking option from the right-back position and also offer them much of the required depth at right-back. Juranovic’s signing makes sense from a Juventus standpoint because Juan Cuadrado is getting older and may leave the club soon. He can provide a much-needed attacking threat in Allegri’s system and form a formidable partnership with Chiesa and Di Maria on the right flank of the pitch.

Wrong decision: Juventus outcast should join Barcelona on one condition