Home Analysis Under the Microscope: Why Maurizio Sarri’s Lazio are Looking Like the Top... 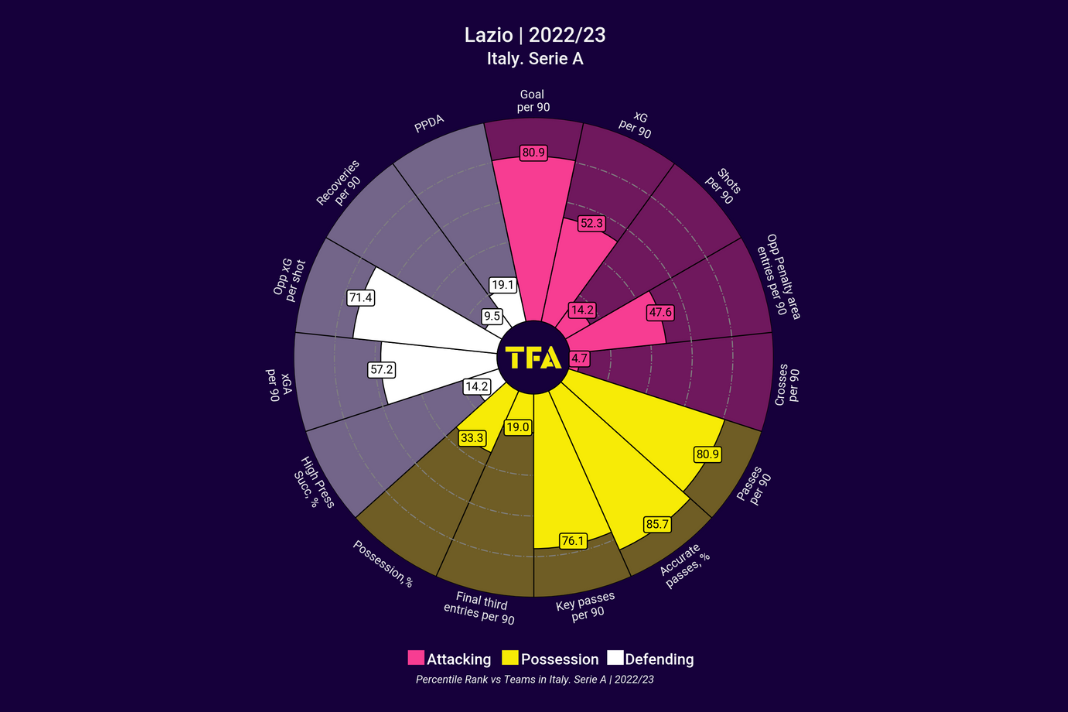 The Italian Serie A race for Champions League qualification is tight, with only three points separating fourth-place Lazio and seventh-place Roma heading into the international break. Lazio, managed by Maurizio Sarri, has made a solid start to the season and emerged as a surprise package in the race for a spot in the Champions League. The Eagles are sitting fourth in the table and are only three points behind the second-placed team, Milan. They have won nine, drawn three, and lost three, all because of their formidable dominance in defence. Maurizio Sarri’s Lazio has conceded the second-lowest number of goals and has nine clean sheets this season in the Italian Serie A. This start to the season has strengthened their expectations of finishing in the top four. We will now look at stats demonstrating why Lazio has a solid chance of participating in Europe next season.

How have the Eagles performed so far in the season? 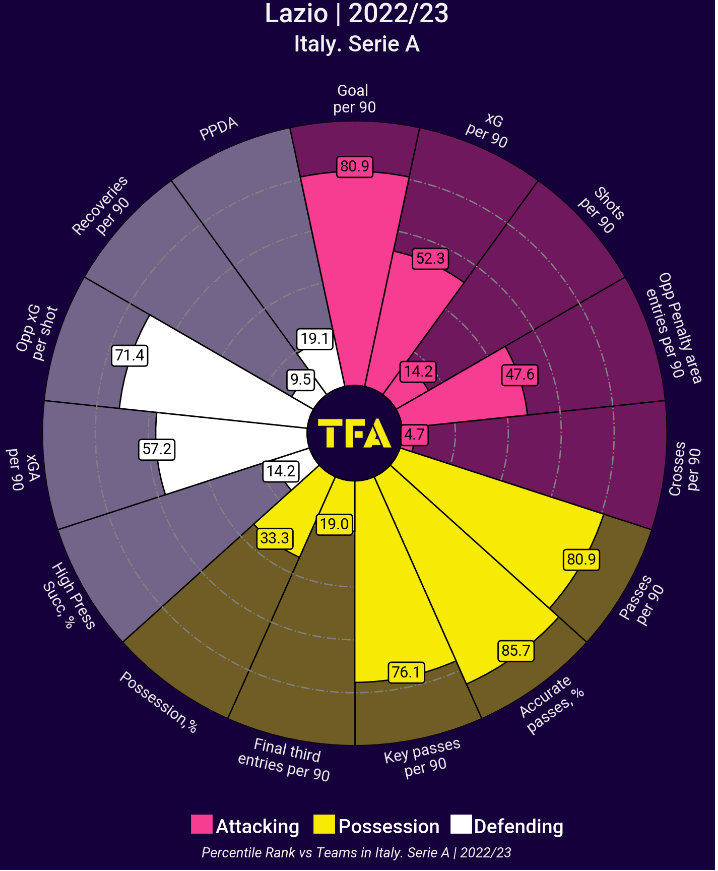 Maurizio Sarri’s men have scored 26 goals and conceded just 11 in 15 matches. The above viz shows the team’s percentile rank in attacking, defensive, and possession stats compared to other teams in the Italian Serie A. We can observe that the Eagles are ranked at the top in the possession stats, especially for accurate pass percentage and passes per 90. They are also ranked high in goals per 90 in attacking stats, which has led to a successful start. Lazio have a high xG rate of 1.48 per match. Another stat where they have performed well is key passes per 90. 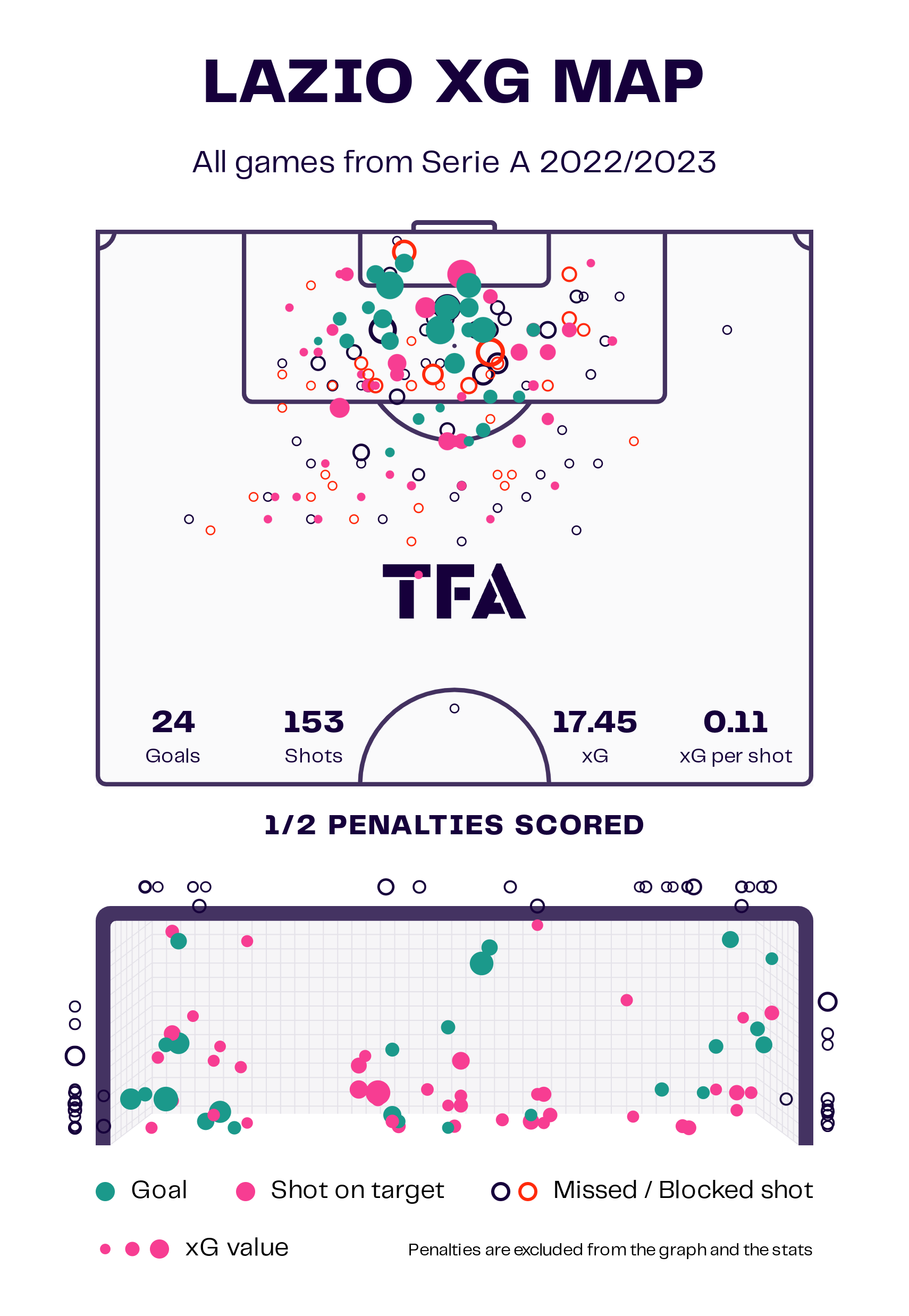 The Eagles have scored 26 goals with an average of 1.73 goals per match. The above viz depicts the team’s shot map for the current season. It can be seen that most of the goals for the Eagles have come from inside the box. Lazio players have massively outperformed their xG this season. Maurizio Sarri’s men score 2.1 goals per 90 minutes and have an xG per shot of 0.13. The xG is relatively high because Lazio players have taken most of the shots from the dangerous area inside the 18-yard box. 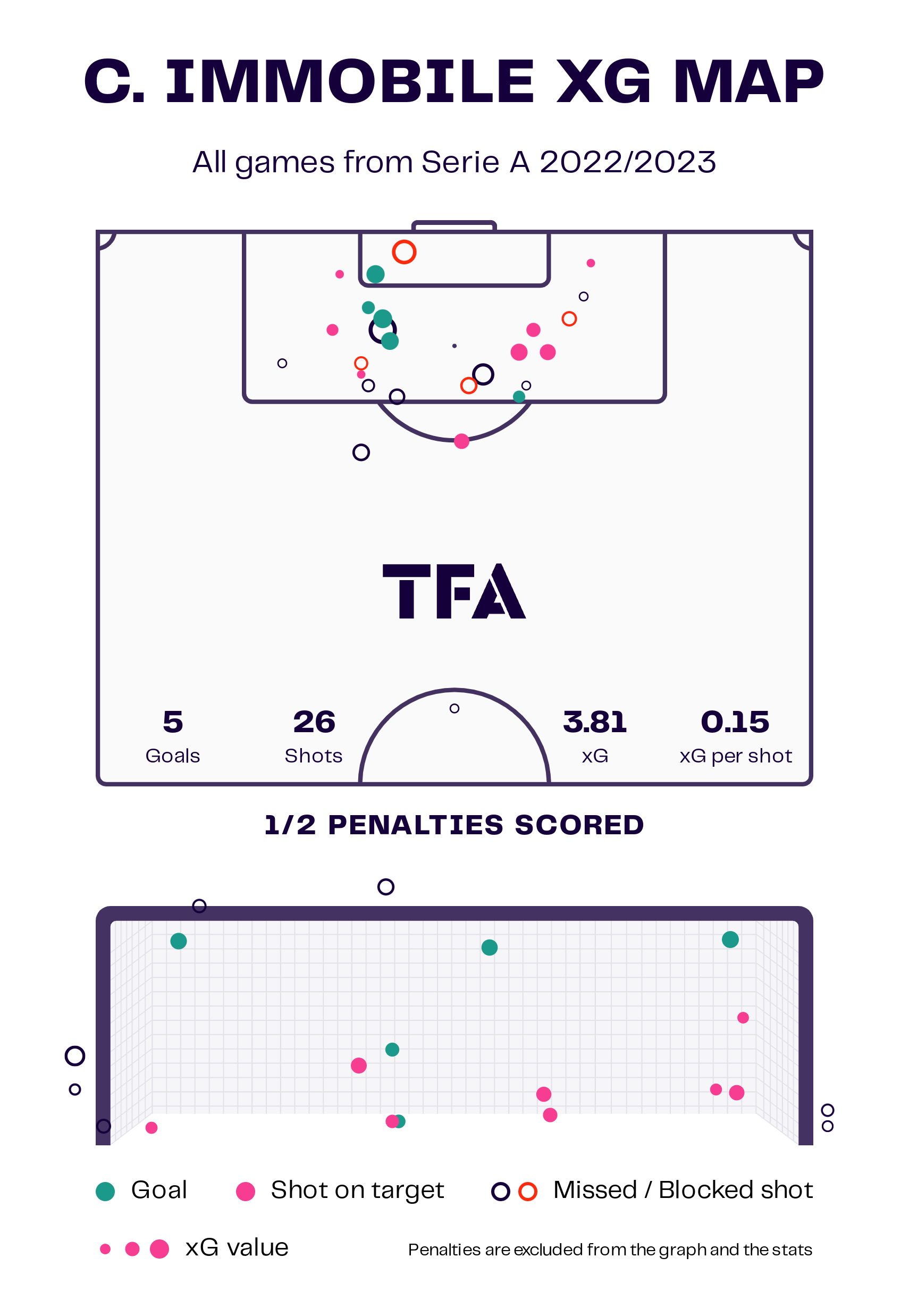 Lazio’s talisman, Ciro Immobile, has been struggling this season with injuries. Despite his injuries, he has contributed to the Eagles by scoring six goals and providing three assists till now in Serie A. The Italian star striker has taken 28 shots with a conversion rate of 22.2. With six goals already, he is expected to be the Eagles’ leading scorer. 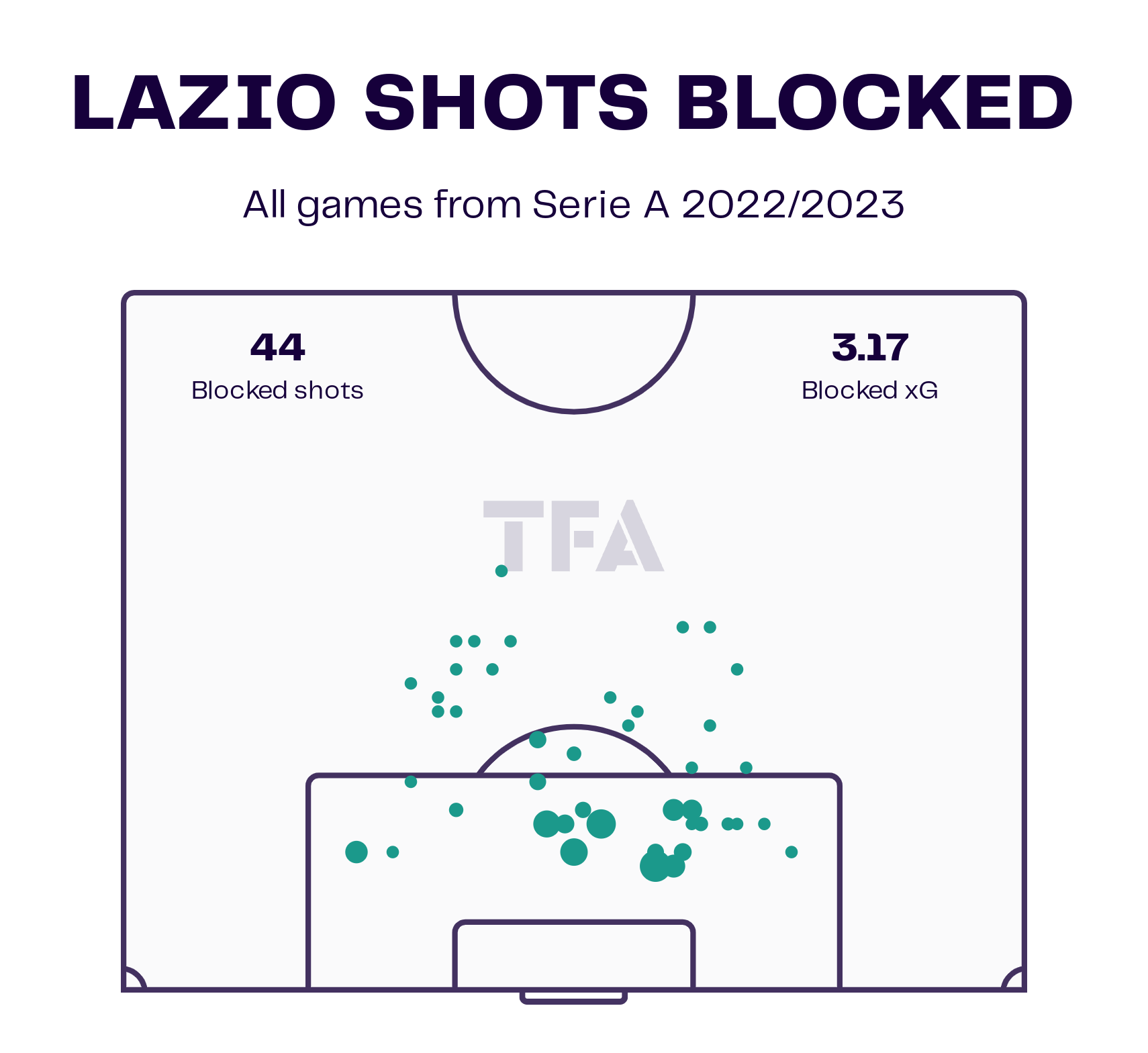 Maurizio Sarri’s men have kept clean sheets against Roma and Atalanta, which shows how solid their defence has been this season. Defenders for Lazio have thrown their bodies on the line and blocked 44 attempts. These blocks were significant and were made within their 18-yard area. The defender who has impressed the most for the Eagles side is the 27-year-old experienced Italian centre-back, Alessio Romagnoli. He has made 3.6 clearances per game, 1.3 interceptions, and 1.4 tackles per game. 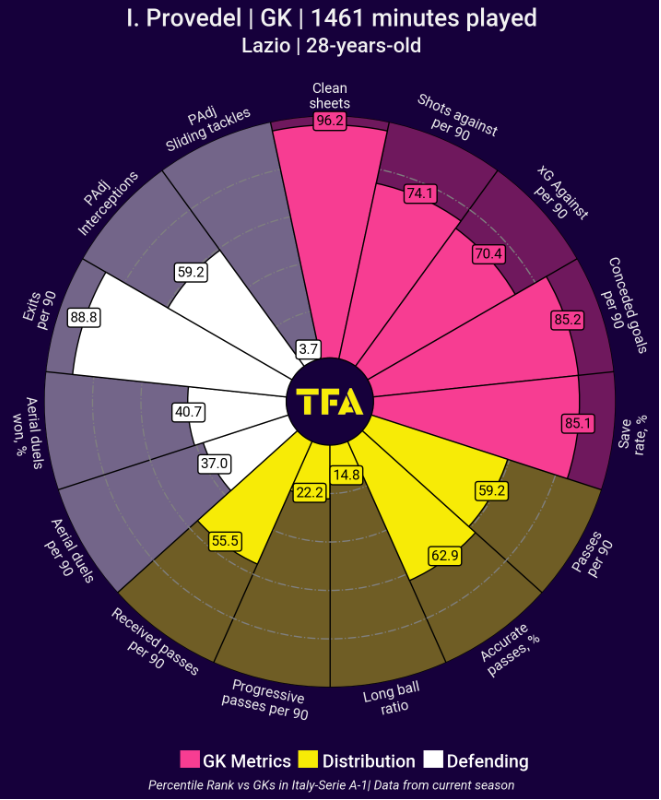 Another reason behind the success of Lazio’s defence is their 28-year-old summer signing of goalkeeper Ivan Provedel. This season, the Italian goalkeeper has made an immediate impact, keeping nine clean sheets in Serie A. He is leading the race for the Golden Glove this season. He has made 38 saves till now, making 2.5 saves per game with an accuracy rate of 78%. 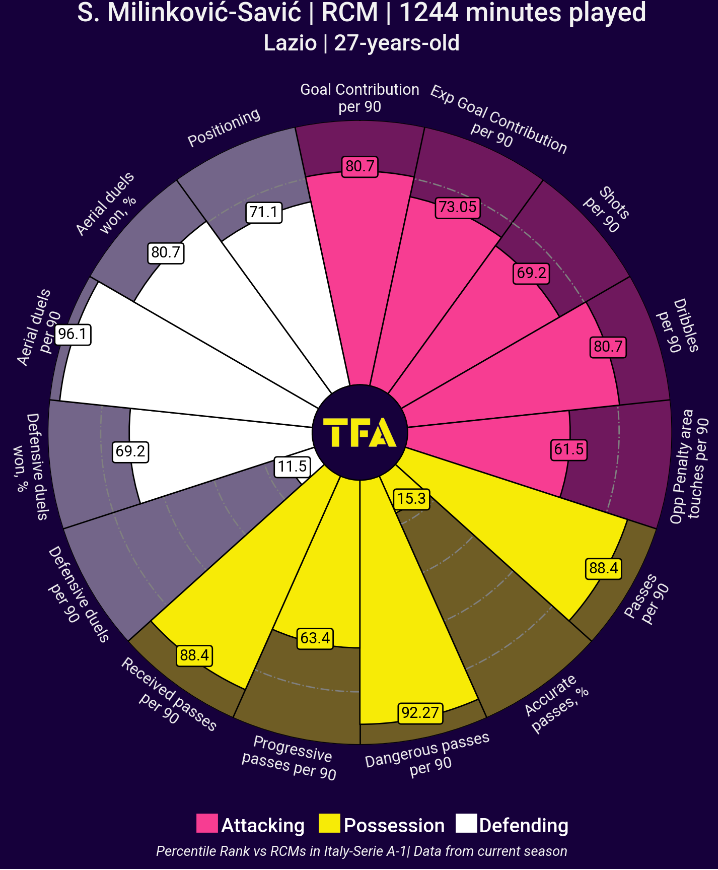 Sergej Milinković-Savić has always contributed to the Lazio side by providing assists and helping them create goal-scoring opportunities. The Serbian already has seven assists to his name this season. Averaging 39.9 passes per 90 minutes this season, Savic has a reasonable enough accuracy rate of 76%. Savic averages around 1.4 key passes per game and has provided seven assists in Serie A this season, which is significantly appropriate for a central midfielder. The 27-year-old Serbian has netted three of his 21 attempts this season. Sergej Milinković-Savić has been leading the charts for goals and assists combined by a midfielder in Serie A, along with Nicolo Barella.

Lazio have been a consistent side in Serie A this season. The defence has played a crucial part in their successful start to the Serie A season. Ivan Provedel has made 38 saves and kept nine clean sheets. Lazio’s defence is commanded by the experienced Italian Alessio Romagnoli and Adam Marusic; meanwhile, the midfield is led by the midfield maestro Sergej Milinković-Savić, and Ciro Immobile, and Mattia Zaccagni controls the attack. Maurizio Sarri will hope these players stay at the top of their game, perform consistently after the World Cup, and finish in the top four.