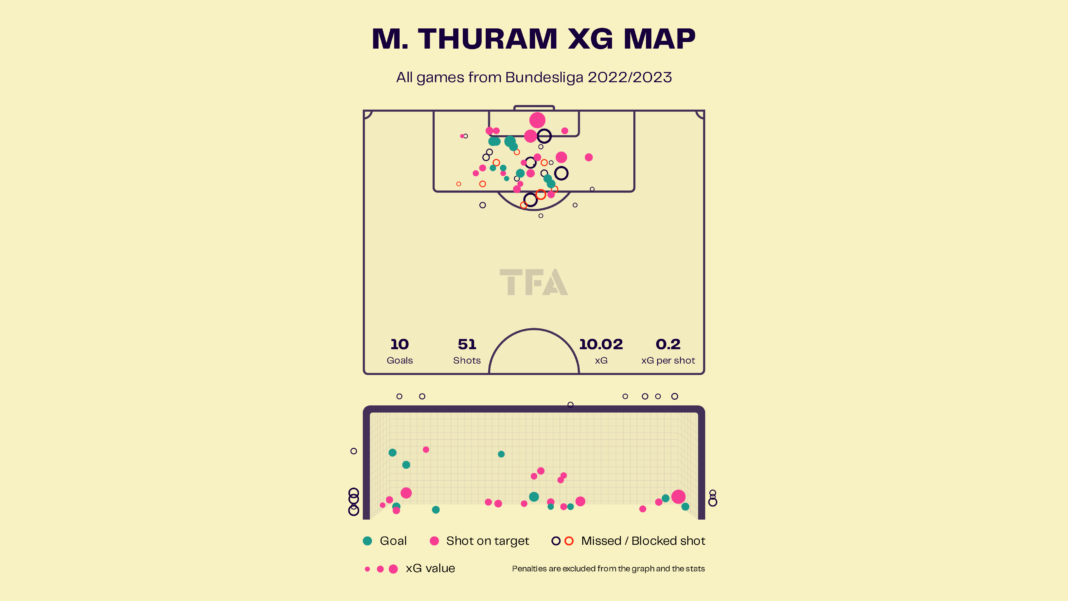 One player who has come under the spotlight in the last few seasons is Marcus Thuram, son of former French legend Lilian Thuram. He has consistently been one of the key performers for Borussia Mönchengladbach, who have struggled in the German Bundesliga for the last two seasons. He also earned a call-up for the French World Cup squad for the FIFA Qatar World Cup 2022. Marcus Thuram has been instrumental for Borussia Mönchengladbach this season, scoring ten goals and providing three assists in 15 appearances. Inter Milan, Tottenham Hotspur, and Bayern Munich are fighting to sign this crucial player on a free transfer next summer. Serie A side Inter Milan have already begun meetings with Marcus Thuram’s entourage, which will continue after the World Cup. 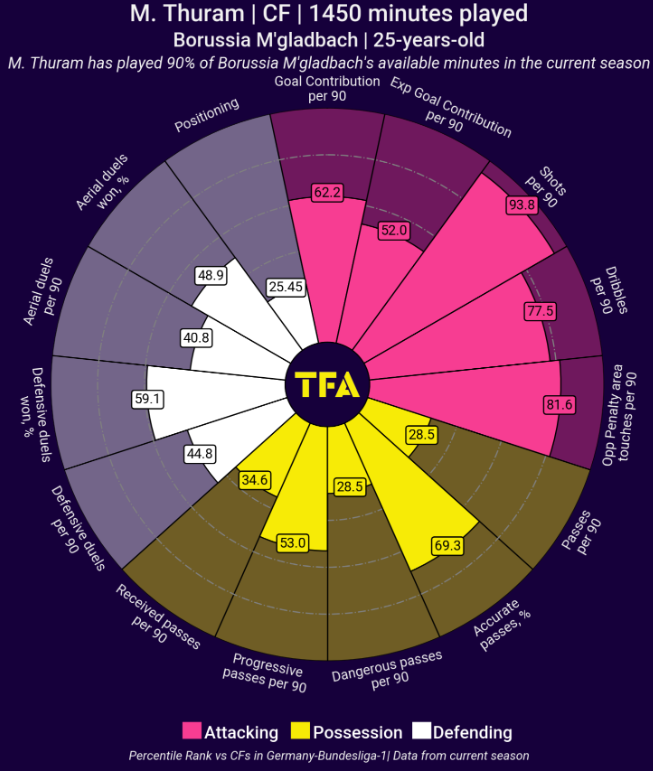 Marcus Thuram has been an integral part of the Borussia Mönchengladbach side. The Frenchman has played 15 matches in the German Bundesliga, scoring ten goals and providing three assists. Thuram has been the third-highest goal scorer in the Bundesliga this season. The above viz shows the stats of the player in comparison to the other players featured as central forwards. It can be observed that Thuram has dominated in the shots per 90 stats. Another area where Thuram has been dominant is the opposition’s penalty area touches per 90. 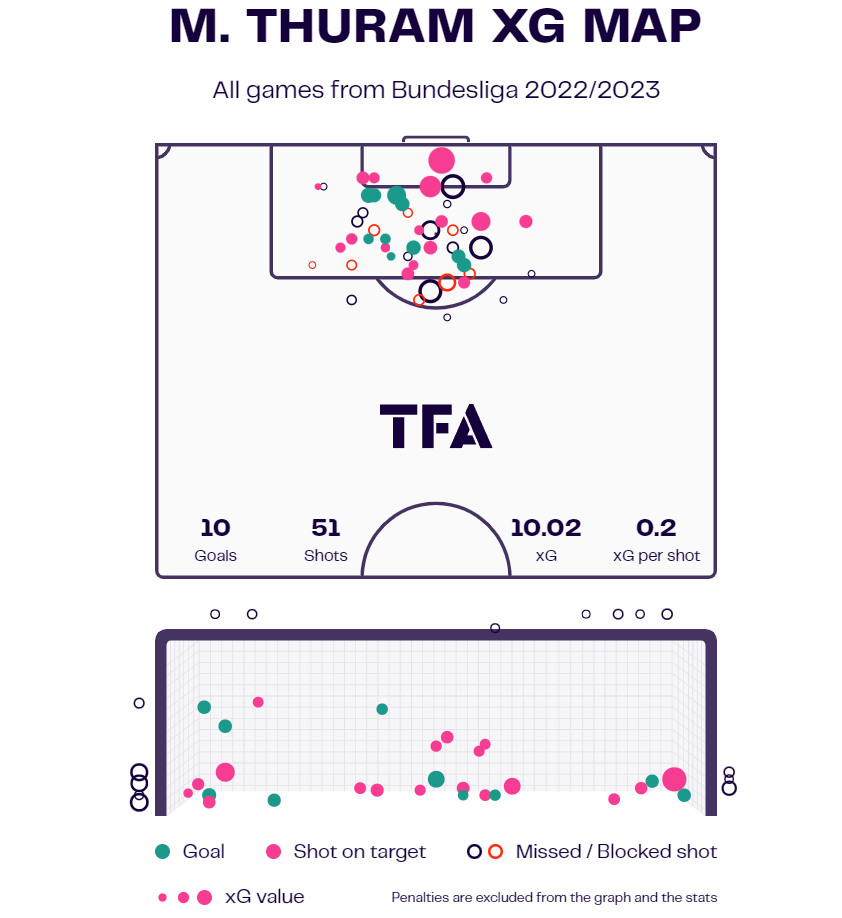 Marcus Thuram has added ten goals to the Borussia Mönchengladbach tally this season. Averaging 3.7 shots per 90 minutes, the player also averages two shots on target per game. The above viz shows the shot map of the forward in the German Bundesliga. Marcus Thuram has taken most of the shots centrally, with almost every shot coming from inside the penalty box. The shots are primarily targeted towards the centre or right of the keeper. 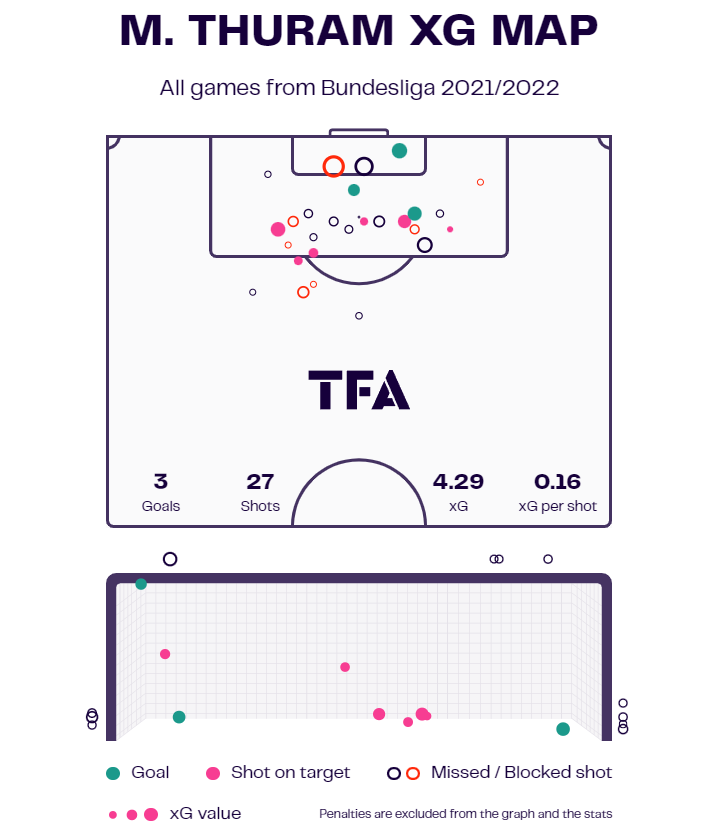 Marcus Thuram has shown a significant improvement from last season. During the previous season, Thuram scored three goals and provided zero assists. The shots per 90 minutes average 1.6, and the player also averages 0.5 shots on target per game. The player has improved significantly and has become a significant threat for the Borussia Mönchengladbach team. 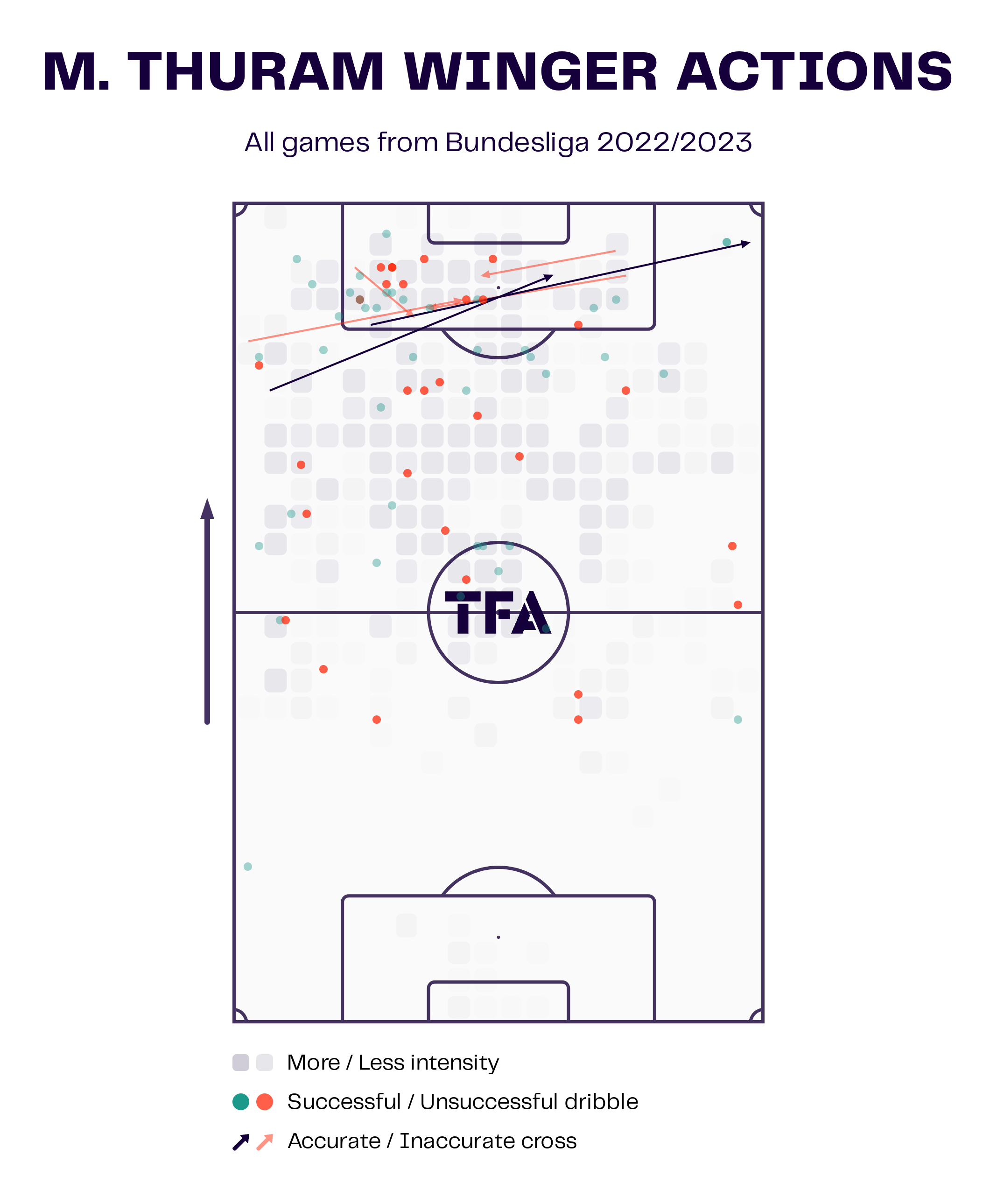 Marcus Thuram is a centre forward who can also provide the width needed for Inter Milan’s attack by coming in from the left wing. Marcus Thuram averages around one key pass per game and has provided three assists in the German Bundesliga this season, which is significantly good for a centre-forward.

Who could Thuram replace? 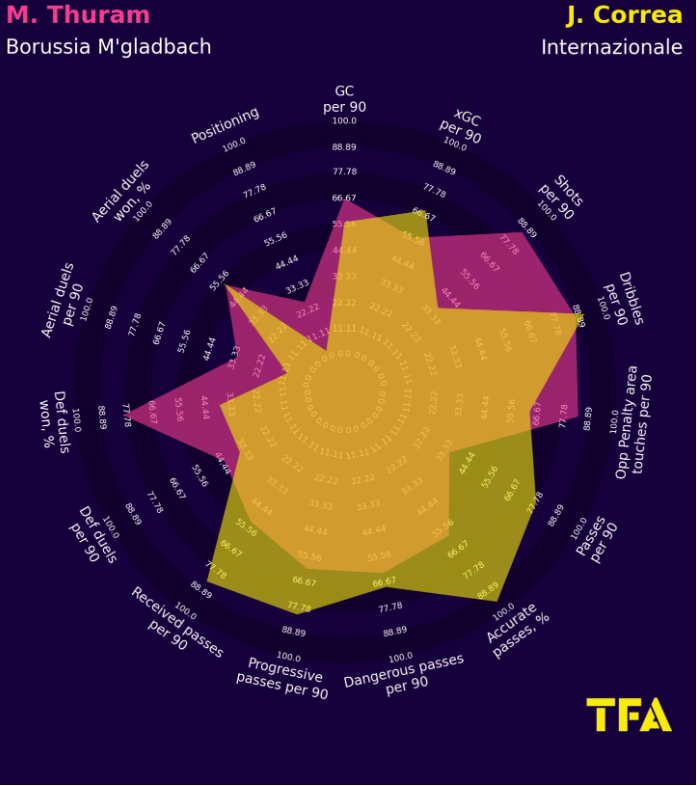 Joaquin Correa has had a disappointing season so far. The Argentine made 13 appearances, but only three of them were starts. He scored three goals in Serie A. The above viz shows the comparison between the two players in their respective leagues. It can be observed that Thuram has played better than Joaquin Correa and has better stats than him in most of the data points mentioned above.

In the upcoming transfer windows, Marcus Thuram is likely on his way from the German Bundesliga to Serie A. Inter Milan is the 25-year-old’s most likely destination. Marcus Thuram will demand a colossal wage-price increase, and Inter Milan will have to compete with some other European teams as well for the signing of the player. Marcus Thuram adds a goal-scoring threat and is a crucial member of any team.

2-1 specialists: How long can Juventus continue to grind out results...