Home Analysis Under the microscope- How Napoli’s Portuguese left back has improved so far... 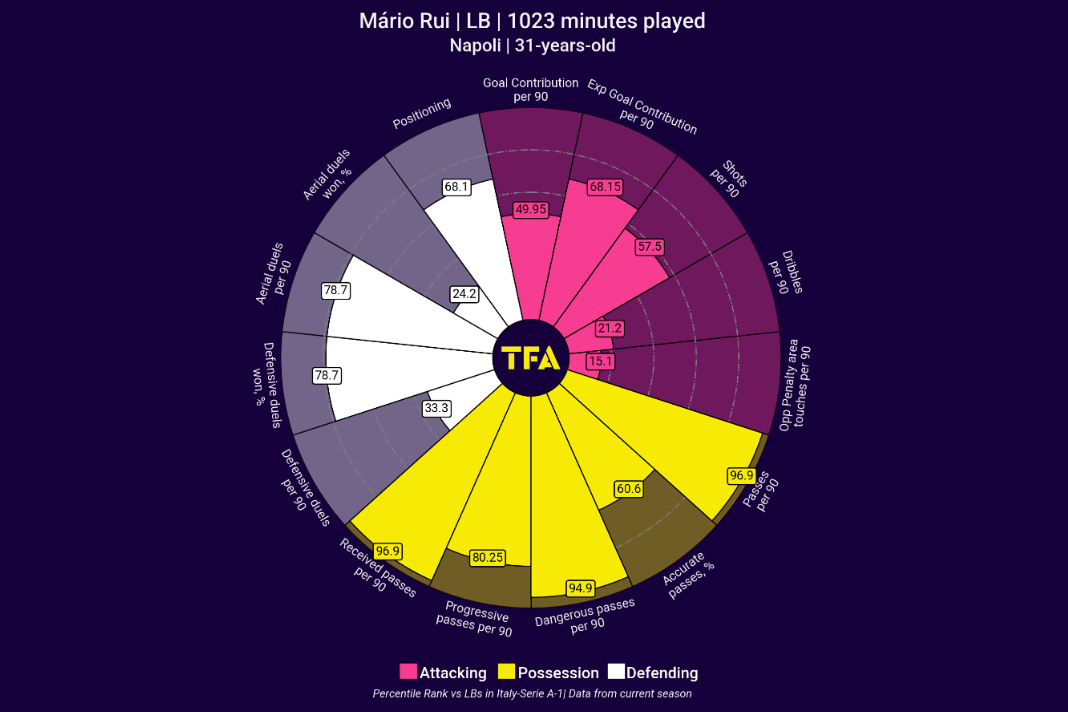 The one player who has always shone and been one of the most consistent performers for the Napoli side in Serie A in the last half-decade is 31-year-old Portuguese left-back Mario Rui. He has consistently been one of Napoli’s best players and the league’s best left-back. He has also thrived in several European tournaments, including the Champions League and Europa League. He is one of the significant reasons why Napoli are currently lying in the first position in the Serie A table. We will now look at the stats and qualities that Mario Rui brings to this Napoli side. 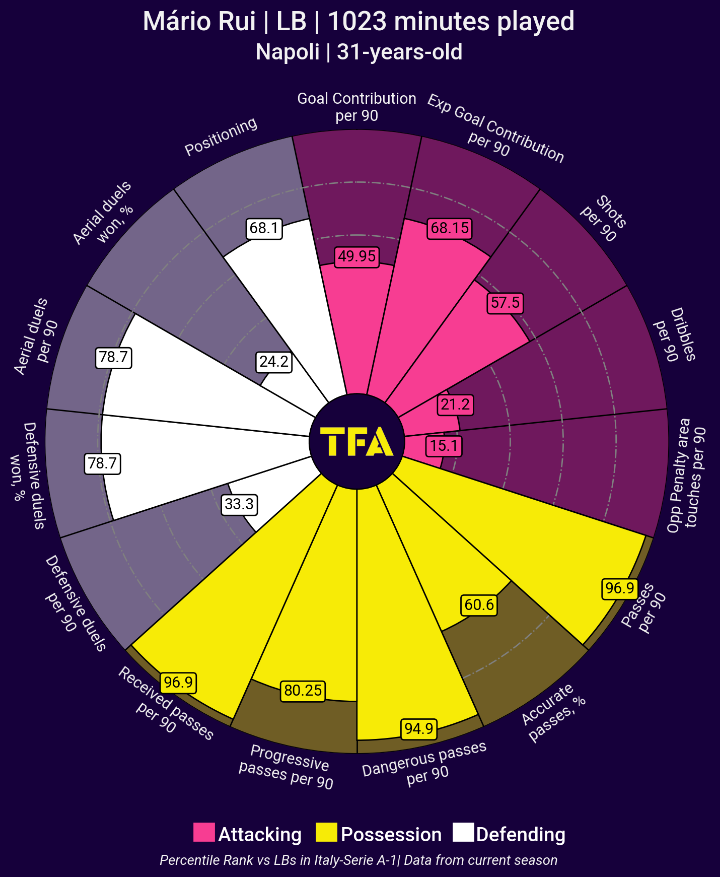 The 31-year-old Portuguese defender Mario Rui has provided five important assists for the Napoli side in the current season of Serie A. The above viz shows the stats of the player in comparison to the other players featured as left backs in Serie A this season. It can be observed that Rui dominates the majority of the Serie A left-backs in most of the possession stats. Rui ranks highly in the passes per 90 stats. Rui has also performed well in the following statistics: received passes per 90, dangerous passes per 90, progressive passes per 90, and aerial duels per 90. Rui likes to provide creativity to the Napoli side from the wings; he has created the second-most chances for the Napoli side in the current Serie A season. 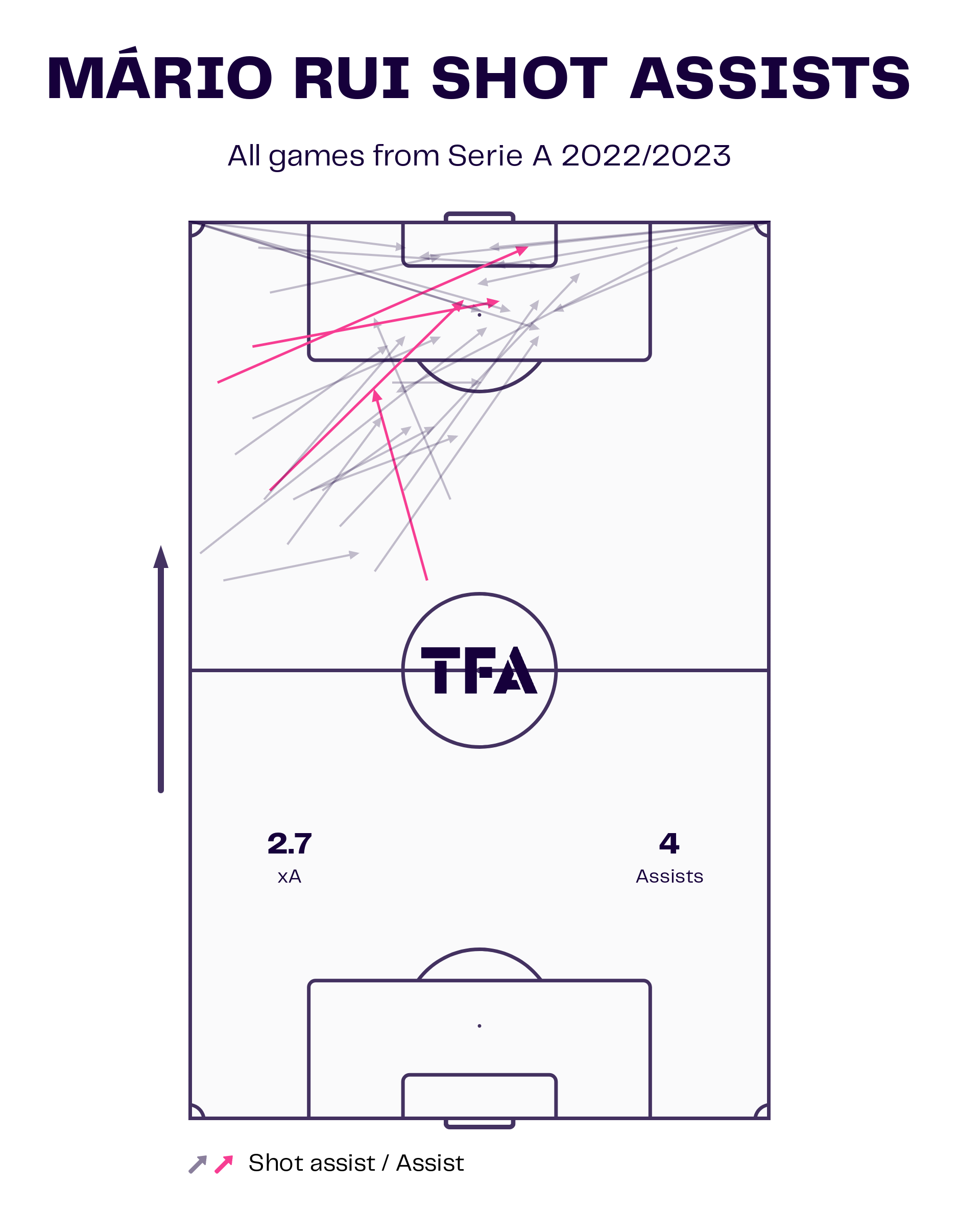 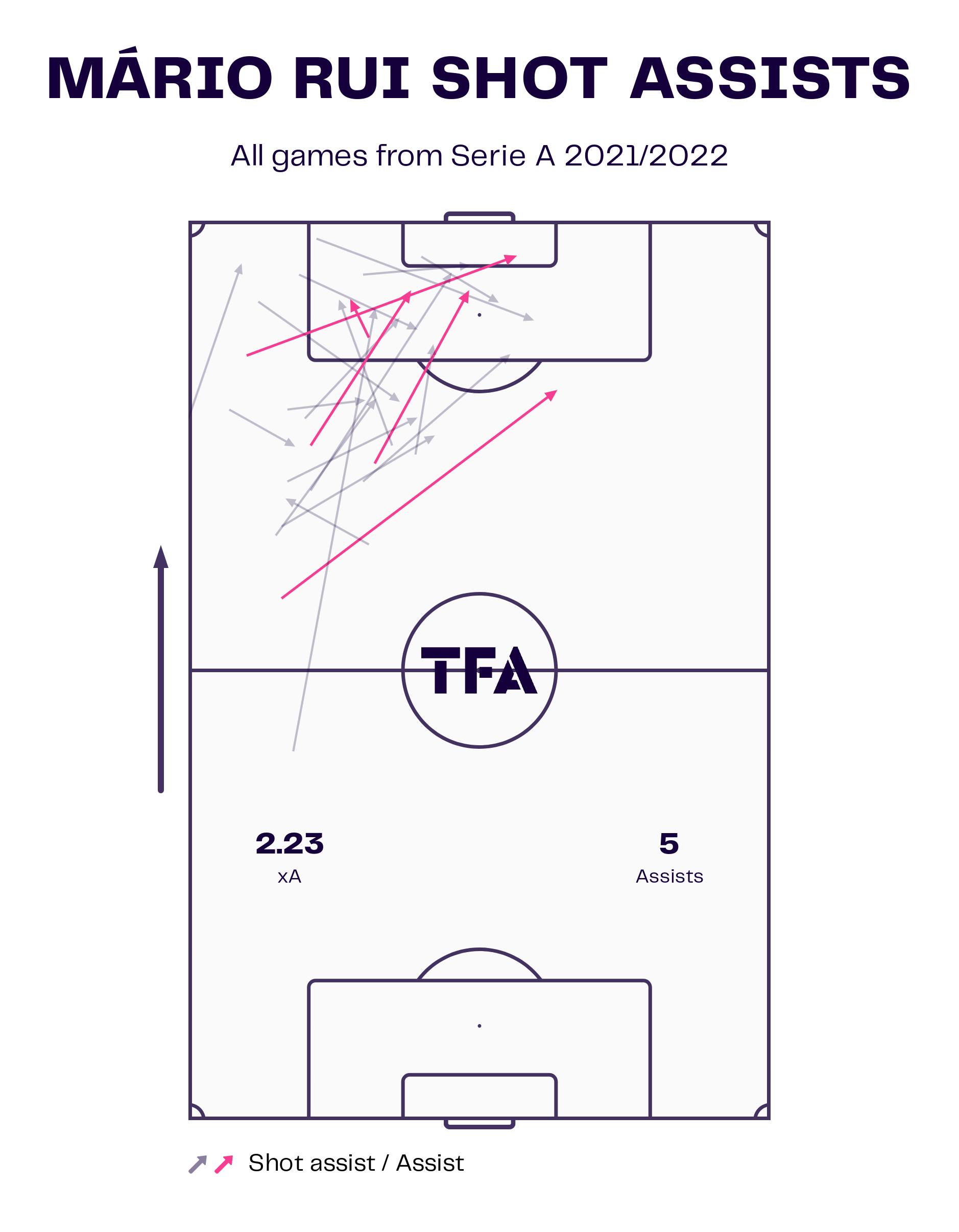 Mario Rui has improved his playmaking skills in the current season, as can be seen by his stats regarding key passes and the fact that he has already equalled his assist tally from the last season. 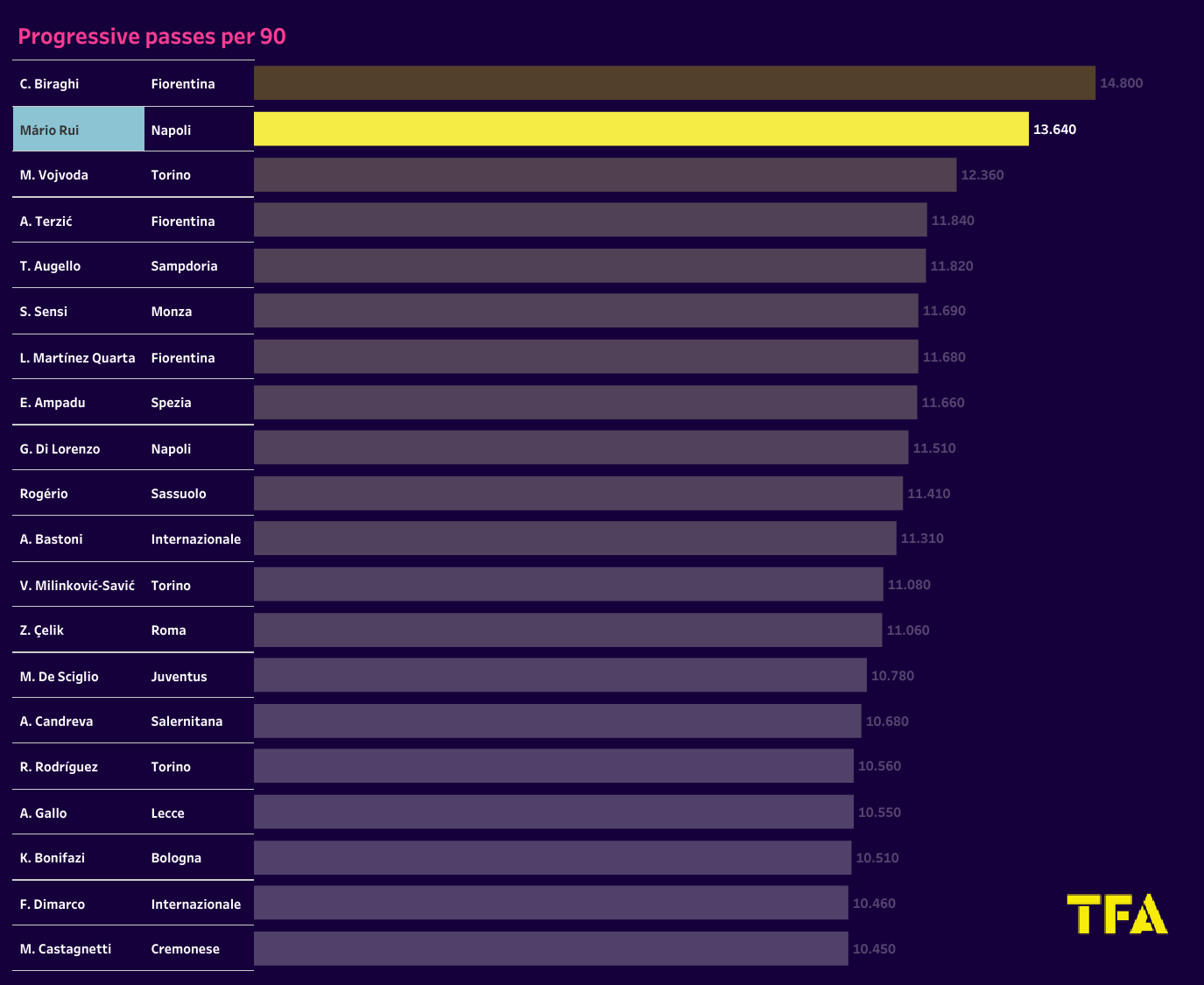 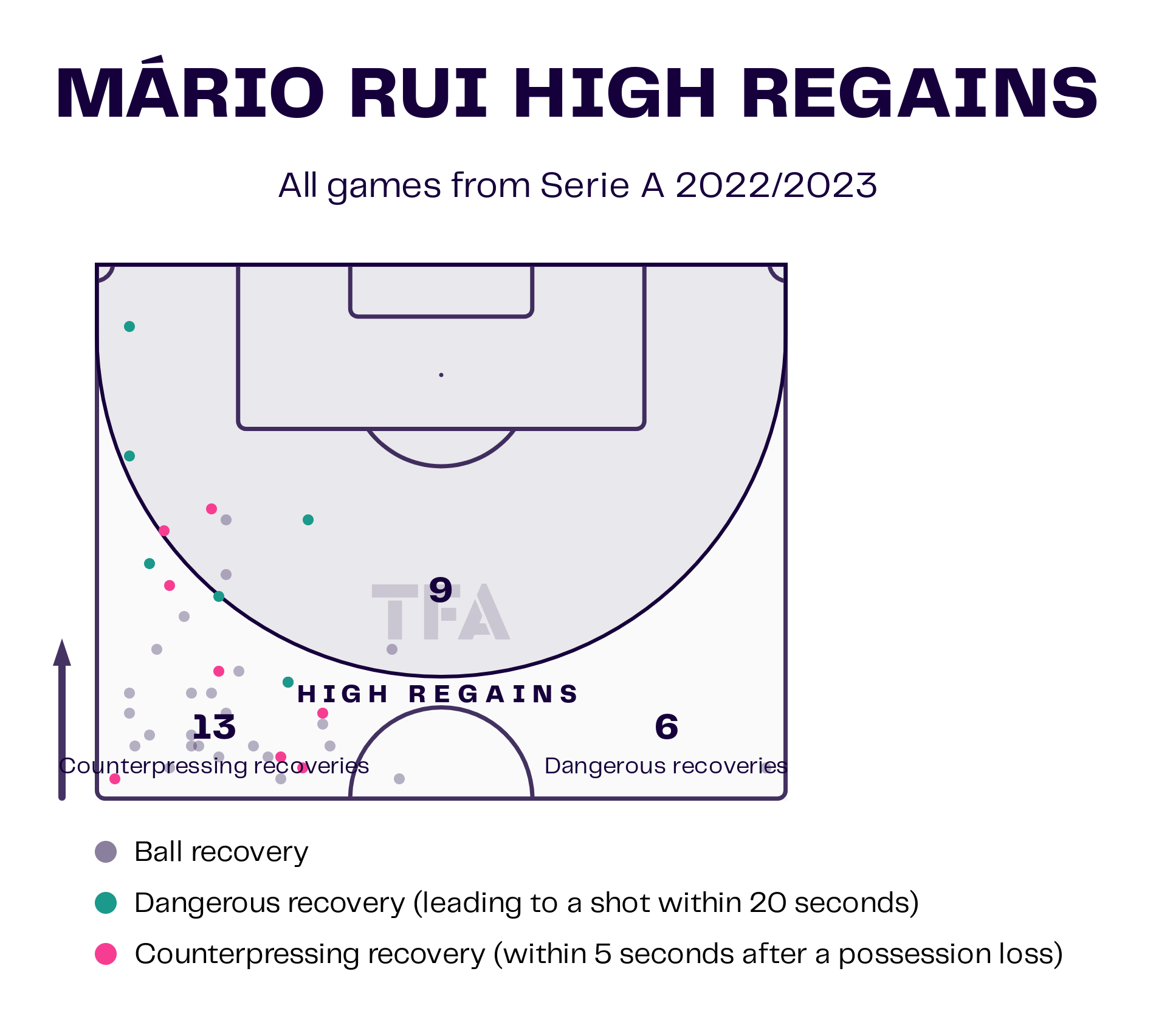 Mario Rui has worked hard to recover the ball for Napoli in dangerous areas. This season, Rui has managed nine regains in the final third. Six of these nine recoveries have been dangerous and led to a shot within the next 20 seconds of the recovery. The Portuguese defender has made 13 counterpressing recoveries in Serie A. He has attempted a total of 114 recoveries for the Napoli defence this season. 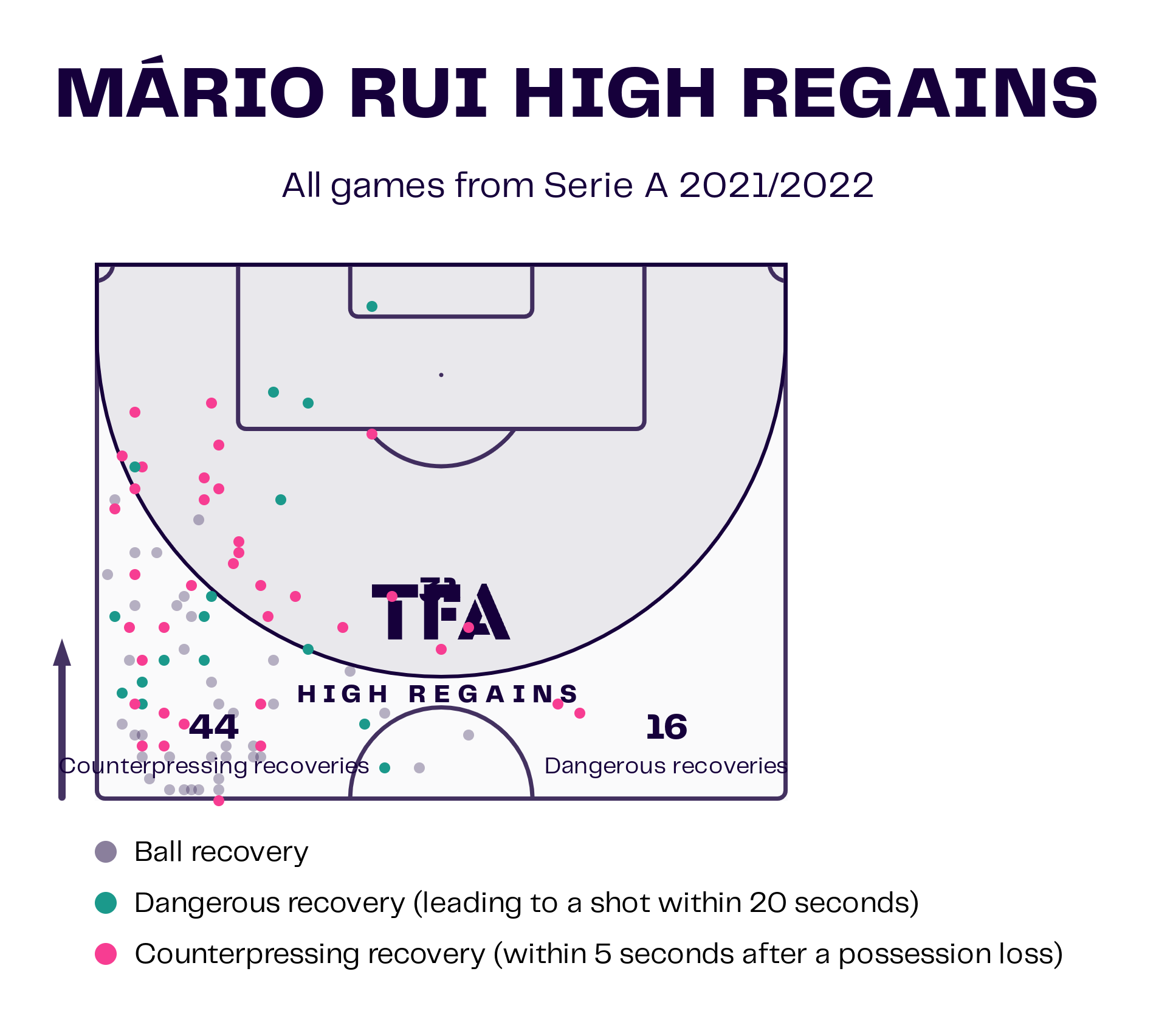 During the Serie A 2021–22 campaign, Mario Rui managed 31 regains in the final third. Sixteen of these 31 recoveries were dangerous and resulted in a shot within the next 20 seconds.The Portuguese defender had made 44 counterpressing recoveries in Serie A last season.

Napoli and Luciano Spalletti will be happy with the performance of 31-year-old, experienced Portuguese defender Mario Rui this season. Rui has been an integral part of this Napoli side. His five goal-scoring contributions and playmaking skills in defence have helped Napoli make a great start in the 2022–23 Italian Serie A season. The Portuguese will look to maintain this form after the international break, scoring goals for his team and dominating games from defence.