This post originally featured on our dedicated analysis site for football around the globe, totalfootballanalysis.com

Juventus continued their unbeaten Serie A start by beating AC Milan 2-0 at the San Siro. Goals from Mario Mandzukic and Cristiano Ronaldo proved enough to defeat Gennaro Gattuso’s men. This tactical analysis looks at the setups of the two teams and the tactical trends of the game.

Gennaro Gattuso continued with a 4-4-2 formation and paired Samu Castillejo with Gonzalo Higuain up front in the Argentinian’s first clash with his former club. Their line-up read:

Massimiliano Allegri seems to have found his preferred midfield three as Rodrigo Bentancur once again joined Miralem Pjanic and Blaise Matuidi in the centre. The big news, however, was him preferring Medhi Benatia over Leonardo Bonucci on the Italian’s return to San Siro. Full team:

Tactical analysis: What were the tactical trends of the night?

Now let’s take a look at how both teams approached the game tactically.

Milan approached the game with a quite passive defensive setup. They pressed high on some occasions yet mostly decided to drop deeper and form a 4-4-2 block as seen below. 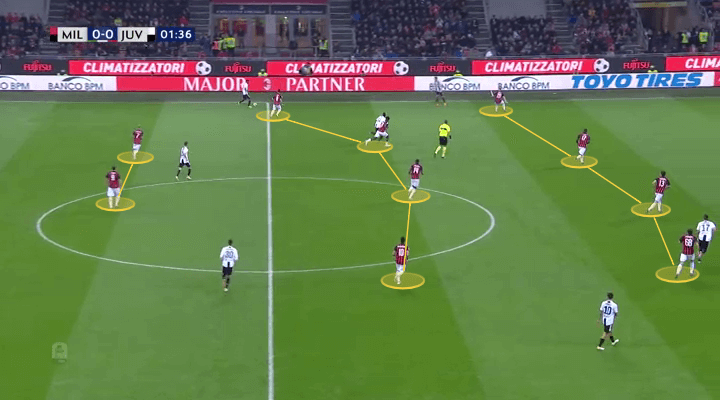 Their positioning was often quite good with the midfield looking to protect the central areas and leave the flanks to the full-backs. The wingers Suso and Calhanoglu would then press from inside and out to try and force Juve wide. A good example of this can be seen below with Calhanoglu more narrow than the left-back Rodriguez. 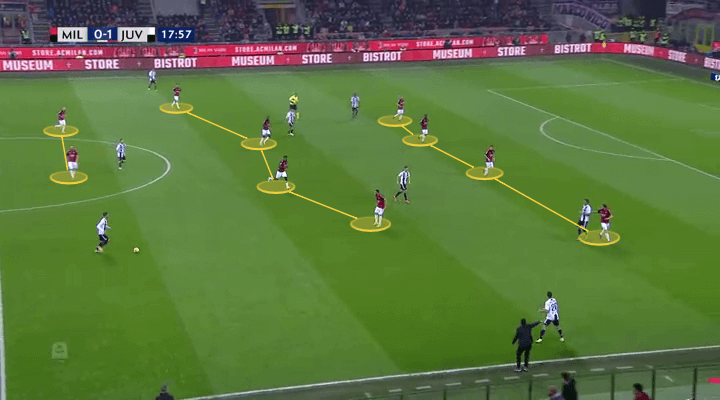 Milan ran into some troubles due to Juventus’ impressive attacking structure, however. Juve lined up in a diamond in possession with Dybala dropping off the front to become a number 10 in possession. This gave Juve a 4 vs 2 overload in central midfield which created confusion for Kessie and Bakayoko. The below example is one scene where Milan’s defending failed. Dybala’s movement towards the ball attracts the attention of Kessie (in the centre circle). Suso has failed to drop into the correct position and this leads to Matuidi having lots of space. Pjanic finds the Frenchman who can switch the ball wide on the left. 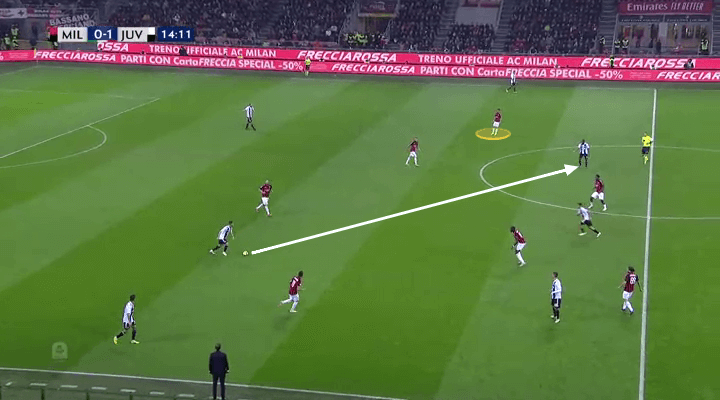 These types of problems to deal with Juve’s central players was a recurring theme during the game.

In attack, Milan looked to centre their two playmakers Calhanoglu and Suso in either half-space as quickly as possible. This often led to the forward Castillejo moving wide in order to avoid a totally congested attack from the home side. The plan seemed to be for the full-backs, especially Rodriguez on the left to move high into the space vacated by Calhanoglu’s inverted movement (see image below). Kessie and Bakayoko would balance in midfield with the likes of Calhanoglu, Suso and Castillejo picking up quite free positions behind Higuain. As we’ll see below, Juve defended narrowly which made it difficult for Milan to progress the ball centrally in a sign Allegri had out-thought Gattuso. 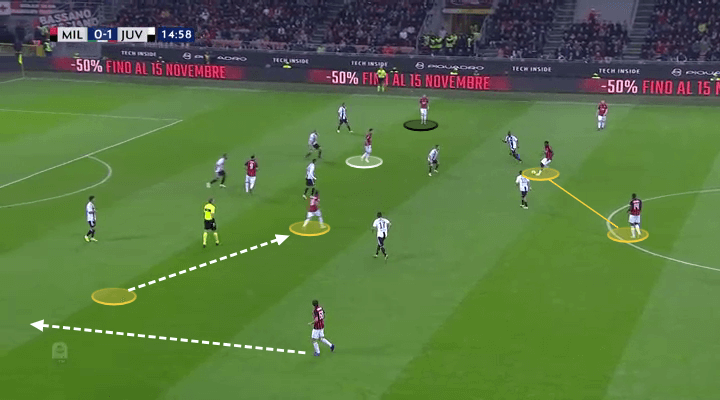 As mentioned above, Allegri had anticipated Milan’s narrow attack and opted for a narrow defence. Juventus often defended in a 4-3-2-1 where they looked to cut off central access for their opponents and instead force them wide. The below image is a good example of this setup. There’s no way through centrally and Milan are forced to play outside Juve’s shape rather than within it. 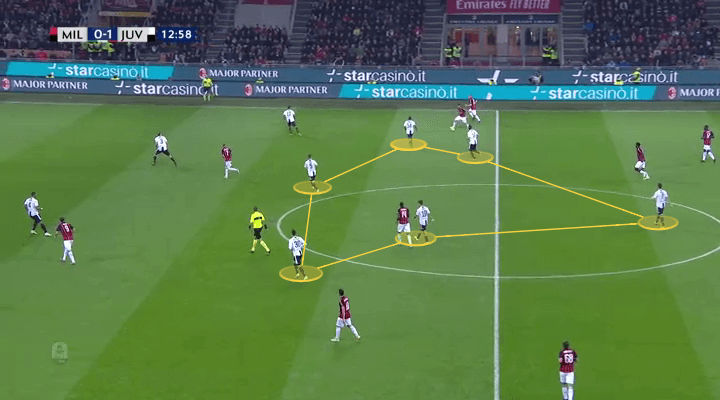 The forwards and midfielders worked in tandem to make it as difficult as possible for Milan to progress the ball centrally. The image below goes a long way in explaining this approach. We can clearly see how the right-back Cancelo, the midfielders Bentancur and Pjanic as well as the forwards Dybala and Mandzukic protect the centre and force the ball wide where it’s easy to press. 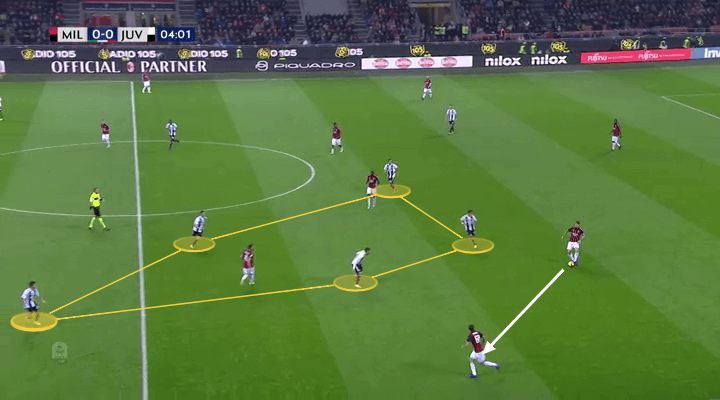 This style of defending, especially the concentration brought by Juve’s players, made it difficult for Milan to create chances and Juve always looked in control of the game.

In attack, Allegri chose to use Paulo Dybala as a number 10 at the top of a midfield diamond with Ronaldo and Mandzukic acting as split strikers and often changing positions. Width was always provided by the two full-backs Cancelo and Alex Sandro. We can see this setup below. It largely mirrors Juve’s set up in the home win vs Napoli. 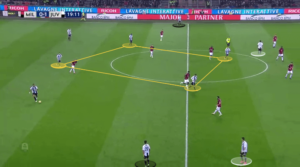 Juve was very clever with their spacing as Pjanic always acted as the deepest midfielder with Bentancur and Matuidi then positioning themselves just outside of Milan’s two central midfielders. This attracted attention from Kessie and Bakayoko who was dragged towards wider areas. This, in turn, created space for Dybala to receive centrally between the lines. Dybala had lots of space between Milan’s defence and midfield due to Ronaldo and Mandzukic always threatening with runs in-behind. The example below is a good example of Juve’s spacing in midfield. 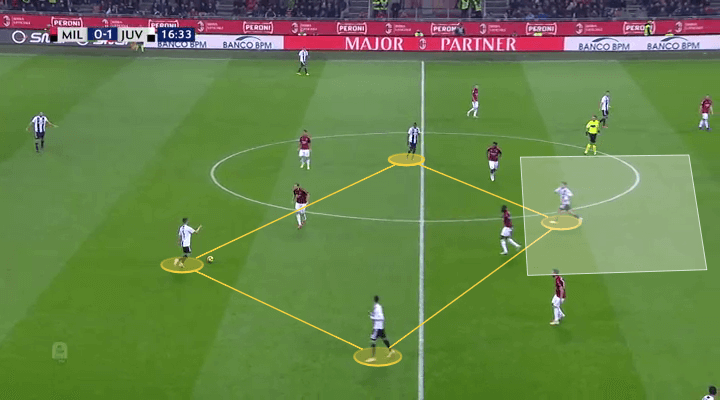 Juve’s front-three was very fluid and often changed positions. Primarily, these changes took place between Ronaldo and Mandzukic. The Croatian’s tireless running and physical presence opened up space for the Portuguese and both went home happy with a goal each. The below scene is a good example of how Juve’s front-three moved around. I’ve first highlighted the deep position of Dybala (yellow). Mandzukic isn’t in the shot but has moved wide on the right and taken the attention of Rodriguez. This has opened up space for Ronaldo to run into and Pjanic finds that run with a crisp pass. 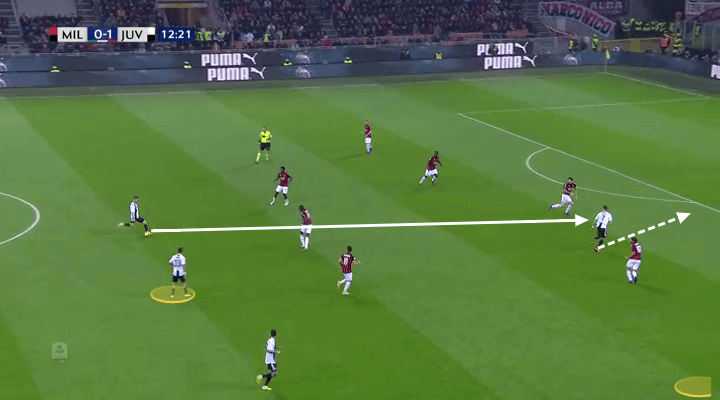 Juve’s opening goal also came from the fluid positioning of Juve’s attackers. In the below image, we see Ronaldo wide on the left alongside Alex Sandro. The left-back swings a cross in where Dybala and Bentancur (both white circles) attack the central areas. At the far post, however, Mandzukic (yellow) comes at pace and dominates Rodriguez in the air and scores the first goal of the game. 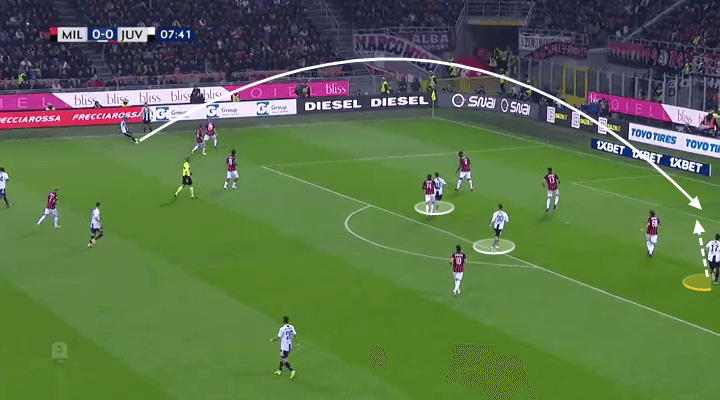 As the two images above highlights, Juve rarely played with a proper striker who would stay in the centre close to the centre-backs. Instead, Ronaldo and Mandzukic would start in wider areas and looked to attack the box at pace. This made them a lot harder to mark and led to Milan’s central defence often having no one to play against. This demands a lot of their concentration and creates problems for the full-backs who had to deal with the duo as well as the likes of Cancelo and Alex Sandro bombing on down either wing.

Juventus have started the season brilliantly and have won eleven out of their twelve games. They’re still undefeated in Serie A and it’s hard to see Napoli or Inter keep their pace throughout the season. Milan were impressively beaten by a relentless Juve with Allegri once again impressing with his managing of games. He also has that feeling of picking the right team. Also, of course, he has a brilliant squad to choose from. For Milan, they won’t be too downbeat since they’re simply one or two levels behind this Juve side. They have enjoyed a good run of form with late wins and will need that form to continue after the international break.

The Data Zone: Denmark’s league title secured by win against over...

End of an era: Ronaldo’s struggles with Juventus shows time is...