Unfortunately, the talk after the top clash between Inter and Napoli has, again in Italy, sadly revolved around the racist chanting towards Napoli defender Kalidou Koulibaly. A supporter was also killed as fan groups clashed. It was a sad and unacceptable night for Italian football. Here, however, we’ll focus on the football as Inter claimed a huge win for Luciano Spalletti. This tactical analysis will focus on Inter’s approach to the game.

Spalletti chose to continue with 4-3-3 and opted for Joao Mario and Borja Valero alongside Marcelo Brozovic in midfield. Carlo Ancelotti’s team was more surprising with Jose Callejon starting at right-back with Fabian Ruiz and Piotr Zielinski on the right and left of the four-man midfield.

As mentioned above I’ll focus on Inter’s approach in this tactical analysis of the game. I will, however, quickly look at Napoli’s approach and how Inter went about trying to overcome them. So let’s begin with the Partenopei.

Ancelotti wanted Napoli to press high early on and sent them out with an aggressive mindset. The 4-4-2 turned into a 4-3-1-2 when pressing as one of the central midfielders – usually Hamsik – would push on and man-mark Brozovic. We can see this setup in the image below with the front-two splitting against Inter’s centre-backs while Hamsik (yellow) picks up Brozovic. 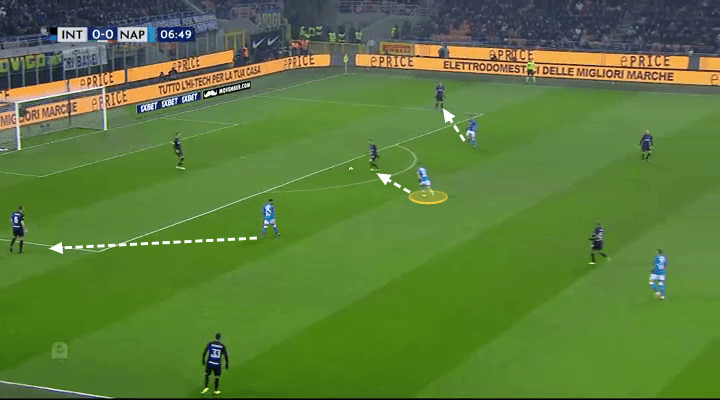 Below is an overview of Napoli’s pressing scheme. Again we see Hamsik mark Brozovic as the shape has turned into a 4-3-1-2. Each Napoli midfielder and forward is man-orientated towards a direct opponent. Due to Inter’s numerical advantage in midfield, however, it meant one Inter midfielder, Joao Mario (yellow) below, would always be free with plenty of space. We’ll see later on how Inter took advantage of this. 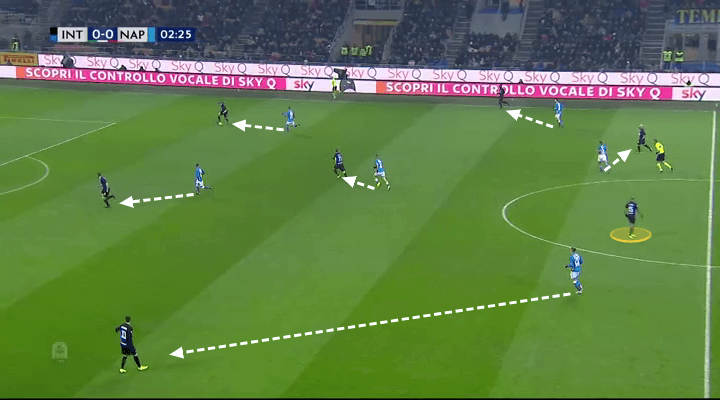 In possession, Ancelotti chose Zielinski and Ruiz as the wide midfielders in order to get inside and help dominate possession. What was most surprising about his team selection was the use of Callejon at right-back. Normally he plays as the right midfielder and provides width for the side. His new position meant Napoli got all their width from the full-backs while the wide midfielders picked up narrower positions. We can see this setup below with both full-backs (black) pushing forward down the wings while the midfielders (all white) are more narrow. Lorenzo Insigne (yellow) had a quite free role just off Milik. 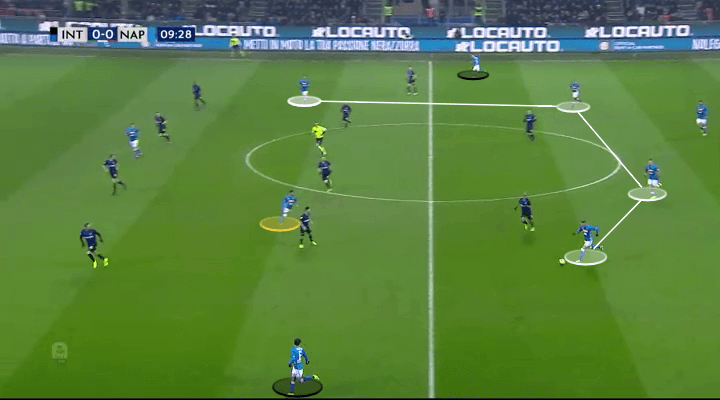 The below image is another example of how Callejon was the main wide threat for Napoli on the right wing. Ruiz (yellow) has just laid the ball off to Allan who will play it into the path of Callejon on the right. Again, note the narrow positions of the Napoli midfielders. 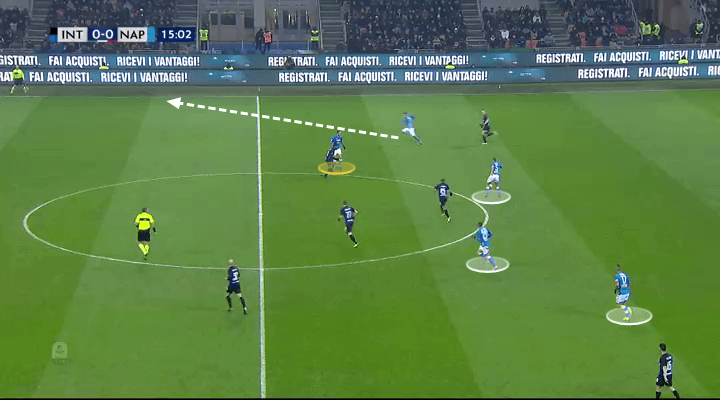 Captain Marek Hamsik was forced off injured in the first half and was replaced by the defender Nikola Maksimovic. The Serbian moved into right-back with Callejon moving to right midfield, Zielinski into the center alongside Allan and Ruiz moved across to the left. This gave Napoli a completely different dynamic in the way they attacked. Callejon (white) played wide on the right with the new right-back Maksimovic (black) slotting in as a third center-back when Napoli had the ball. Allan and Zielinski anchored the midfield with Insigne and Ruiz just off Milik. The left-back Mario Rui (white) continued to provide width on the left in what became a 3-2-4-1 formation in attack. 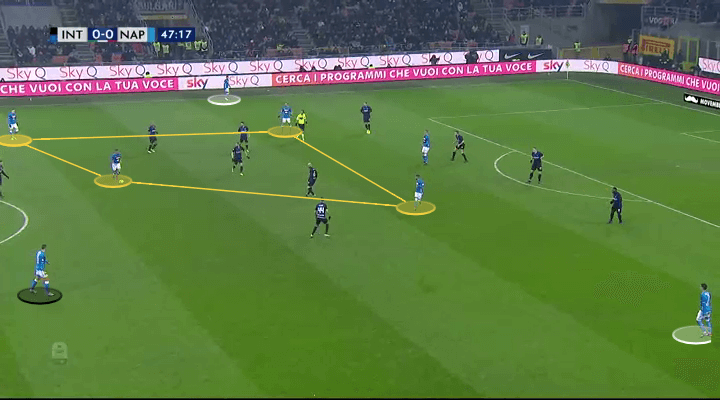 Napoli produced a decent performance away from home and could with some luck possibly even have nicked the win. They were outraged with Koulibaly’s red card with 10 minutes remaining in which was a highly influential moment of the game.

Inter building from the back

As mentioned above, Napoli tried to press Inter high early on. But Inter overcame this press very well which led to Napoli later abandoning the approach and instead started their defending a lot lower. They had two very interesting and clever ways in which they beat Napoli’s press. As I highlighted above, Napoli would defend in a man-orientated manner when pressing high. Inter’s centre-backs and deepest midfielder Brozovic would always be under pressure quickly. The remaining three Napoli midfielders would start from central positions and press from inside-out towards the full-backs. What Inter did so well was benefiting from the numerical advantages they had when looking to build from the back.

The below image is a superb example. De Vrij is under pressure from Insigne and plays the pass to the previously free D’Ambrosio. As we can see, Brozovic is marked by Hamsik in the center. With the ball travelling towards the Inter right-back, Zielinski (yellow) leaves Joao Mario and moves to press D’Ambrosio. As such, Mario (white) is now the free man. D’Ambrosio lays the ball off to Mario and Inter have broken the press. On some occasions, Hamsik would manage to cover the pass to Mario, but then Brozovic would be the free man and the press still in vain. 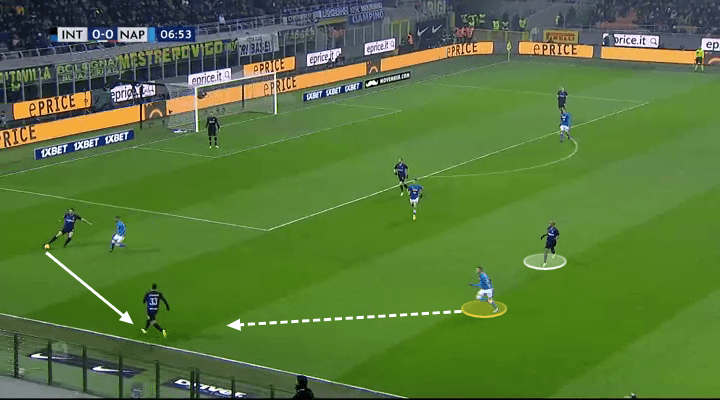 The other method Inter repeatedly used was rotations in midfield and early passes into Mauro Icardi. I’ve written about these rotations in the past, most notably in the loss at Juventus. It’s clearly something Spalletti works on and they proved very effective against Napoli.

The situation below is the best example I could illustrate. We have D’Ambrosio in possession on the right. We see Mario making a diagonal forward run from his position in the right-sided half-space in central midfield. This opens up the passing lane from D’Ambrosio to Icardi. We can see Icardi’s dropping movement into the space between Napoli’s defence and midfield. This space is so big due to Allan concentrating on Brozovic. The pass is played, Icardi receives, turns and switches the point of attack to the left wing. 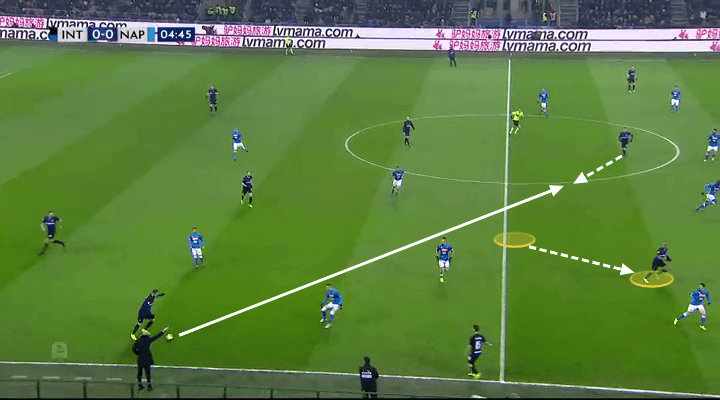 Below is another example of Inter using Icardi in a different role than what we’ve usually seen from the Argentine. Here he’s dropped into that space again and received the ball from Inter’s right. He lays it off to Valero who sprays it wide left. Icardi’s hold-up play was excellent and a real key to Inter’s successful build-up play in the first half in particular. 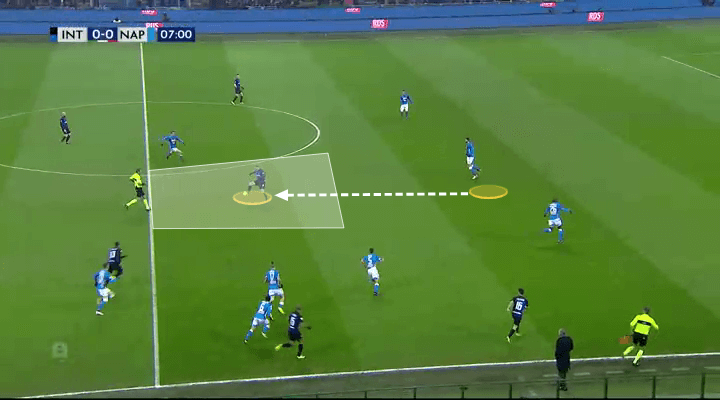 Inter also succeeded in opening up passing lanes by attracting pressure from Napoli’s midfielders. The below example shows Allan being attracted to Skriniar who plays the ball into Mario. The midfielder has found space vacated by Allan and can receive the ball with time between the lines of Napoli’s defence and midfield. 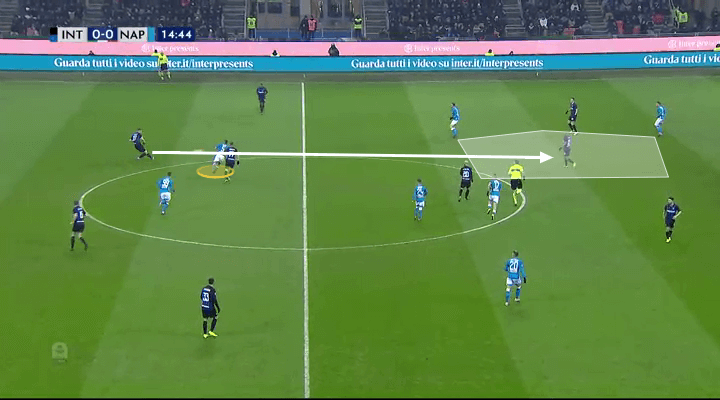 I’ve been quite critical of Inter’s passing previously this season but especially the first half on Boxing Day was some of the best passing they’ve shown all season. They carved through Napoli’s press time and time again and the vertical nature of their passing was great to watch.

Inter knew that with Napoli on the other side they were up against one of Europe’s most comfortable sides in possession. Spalletti sought to press them high and disturb Napoli’s rhythm before they found it. Inter did this very well and pressed in a very organized and effective manner. The below image shows the application from the players with six players so far forward cutting off passing angles for Koulibaly. 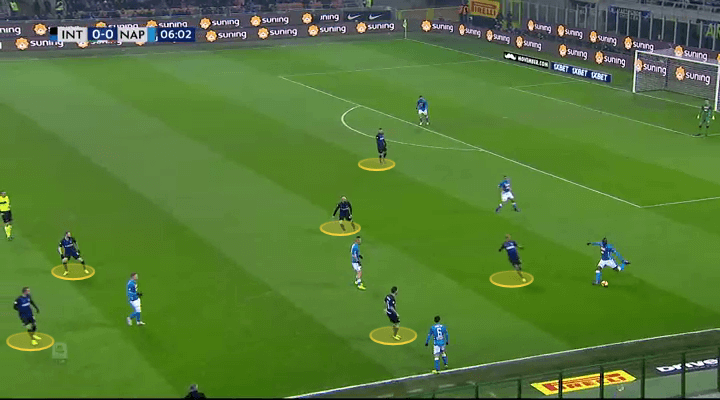 It was clear Inter wanted to cut off the central areas and steer Napoli wide. As soon as a pass was played backwards Inter would move forward and press. Below we can see Mario putting pressure on Callejon with Icardi having already started his movement towards Albiol. Also notice the position Matteo Politano, Inter’s right winger, picks up. He has moved inside to get access to Koulibaly while leaving Rui free on Napoli’s left. This positioning highlights Inter’s intent; block the center and force Napoli into the wide areas. 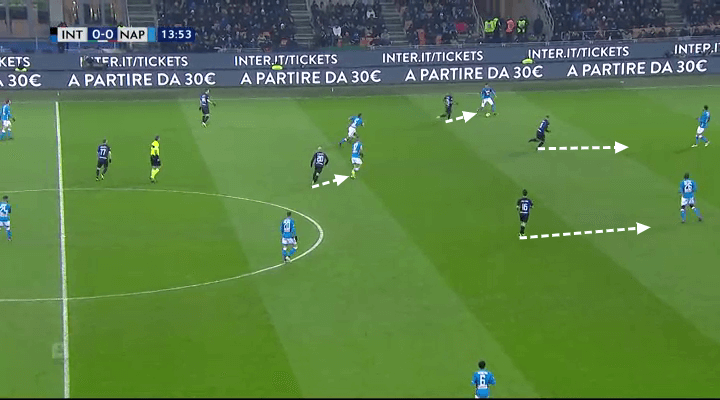 The image below is another example with Valero pressing Koulibaly and steering him towards the wing where Politano is ready to press Rui. 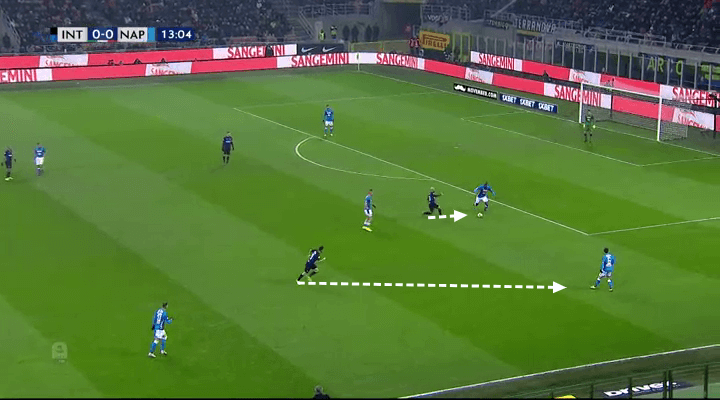 The aim was to force situations like the one below. Icardi presses Napoli’s goalkeeper Meret while Valero and Politano remove the short options. Meret sees the ‘free’ Rui on Napoli’s left and clips the ball out to him. This is exactly what Inter wanted. Joao Mario has already started his run towards his compatriot while Politano turns and presses from the other side. 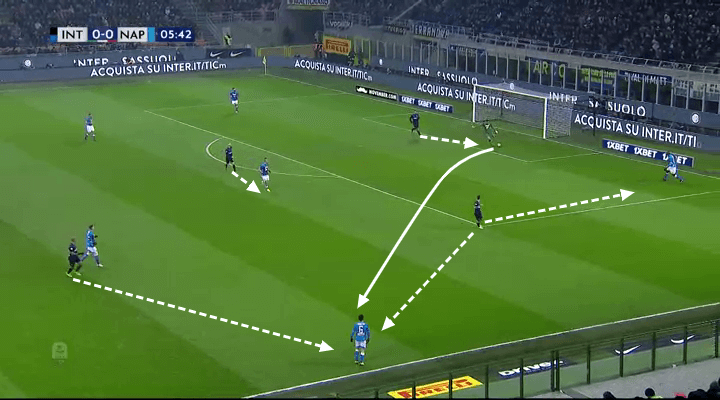 Inter’s pressing and also their counter-pressing (not something they always do) was superb and made it difficult for Napoli. Napoli had an average pass streak of five passes per possession before Inter won the ball back which shows how effective Inter’s pressing was.

Lautaro Martinez late winner gave Inter a crucial win after a couple of months of poor form and below-par performances. Luciano Spalletti has been repeatedly questioned in this period so this win was vital for him. It also closed the gap between the two teams to five points. But Juventus probably celebrated even more than Inter as their draw at Atalanta went unpunished with them instead increasing their lead to nine points. As the last round of the first half of the season gets underway today, neither Napoli nor Inter look capable of challenging them all the way.

Definition of a decade: Defeat reminds AC Milan how far they...