A Serie A Roman derby without key players ended up cracking Roma, who lacked any threat in the absence of their star centre-back Manolas. Lazio, on the other hand, took only 12 minutes to break the deadlock. By winning the derby, the home team reignited the race for a Champions League place ending their miserable four-match run.

This tactical analysis explains how Lazio crushed Eusebio Di Francesco’s defensively poor side, and how the Manolas-less backline of Roma was tactically exposed by an attentive Lazio outfit.

Both teams deployed their usual formations. Roma played with their regular 4-3-3 aimed at playing a possession-based style. Meanwhile, Lazio kept their usual 3-5-2 shape to play in transitions and other opportunities conceded by their defensively vulnerable opponents. 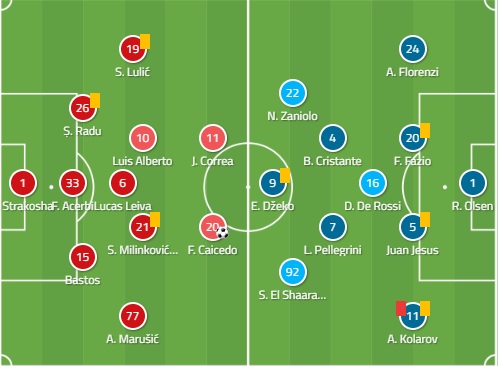 Simone Inzaghi’s men started the game on the front foot. The pressing scheme was laid out as Lazio’s first line of defence. In other words, their front two pressed Roma in the build-up to force the away team to either pass back or play long balls to bypass the midfield. Then in their defensive half, Lazio’s backline and central midfield, three men apiece, were all ready to outnumber their opponents and win the long balls.

Preview: Inter Milan vs Sheriff Tiraspol – what do the stats...

The Statistics: Veretout scores twice in Roma win over Fiorentina