Roma hosted Torino at the Olimpico as Serie A finally restarted after their three-week break. Unfortunately, neither side was able to showcase their best form and looked sluggish. As always though, the clash brought some interesting tactical trends. Roma’s use of the ball proved vital in their 3-2 win. This tactical analysis aims to highlight why the game looked as it did.

Eusebio Di Francesco went for his talented Italian midfield trio with Lorenzo Pellegrini and Bryan Cristante behind Nicolo Zaniolo. Roma were dealt an early blow as Cengiz Under went off injured after five minutes with Stephan El Shaarawy, who would score the winner, replacing him. Torino went for an unconventional line-up with full-back Cristian Ansaldi playing in central midfield.

Tactical analysis: How both teams pressed

The main take-away from the game, which had a huge influence, was how both teams pressed. Let’s take a closer look.

There was nothing revolutionary about Roma’s press at all. In fact, they just used simple man-orientations and pressed the closest man and forced the ball back to Sirigu. The goalkeeper is one of the worst in Serie A with his feet and repeatedly gave the ball away. The below image is one example. If he had moved quickly he could have given the ball to Lyanco with El Shaarawy quite far away. But it was safety first and he went long where Fazio and Manolas dominated. 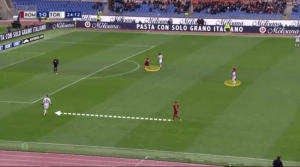 Below is an example of how Roma forced the ball back to Sirigu. Zaniolo starts the press and forces Torino to play the ball backwards thanks to the support-pressing of his teammates who move up. The ball goes to Sirigu and then Roma soon had it back again. 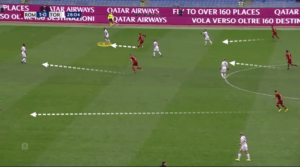 Roma did press well, with Zaniolo in particular excellent at it. Torino’s build-up was really poor though, and they made it easy for Roma to win the ball back.

Torino’s pressing was more interesting given Roma are usually good at progressing with the ball when pressed. They went for man-marking in midfield with Rincon, Ansaldi and Parigini marking Roma’s midfield three. It was an obvious tactic to force Roma wide and not allow the technical midfielders time and space centrally. 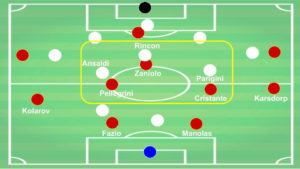 Below is a good example of the marking of Torino’s midfielders with Falque defending alongside Belotti up front. 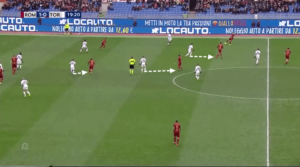 Below is another example of how Torino wanted the game to be congested centrally. They left the wide areas free and focused on denying central space with a tight and hard-working midfield trio behind the centrally positioned front two. 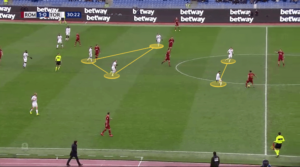 When the ball then inevitably ended up in the wide areas the plan was for the wing-backs to press Roma’s full-back while the near-side centre-back would move wide to press Roma’s winger. An example of this setup is the one below where Djidji moves out to press Kluivert while Aina presses Karsdorp. 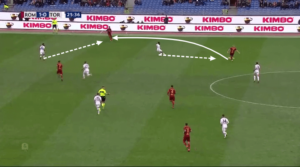 As you’d imagine, Roma looked to exploit the wide spaces they were afforded. Below we can see how congested the central areas where. Former Manchester City striker Dzeko is on the ball looking to spread it wide to Karsdorp (white) on the right. Torino’s left-wing back Aina (red) is so deep that he has better access to Kluivert (yellow). However, his instruction was to press Karsdorp. This allowed Roma to create 2v1 situation in wide areas but truthfully not much came from it. 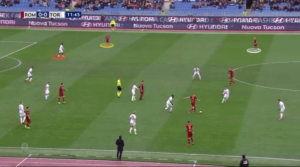 Below is an example from the opposite side with Kolarov (white) in plenty of space while El Shaarawy (yellow) is ahead of him. By positioning both the wingers and full-backs along the wings it was clear Di Francesco was looking for 2v1s. 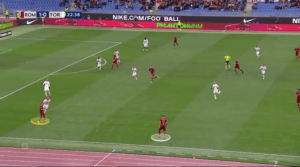 Roma at their best play a very vertical style of passing where the ball moves very quickly forward. When they got these moves going on Saturday Torino just couldn’t keep up. The below image shows an attack where Kluivert plays a forward pass to Dzeko who immediately lays it off to the forward-facing Zaniolo. He then plays the ball in behind for the run of El Shaarawy. By doing this Roma quickly played through Torino’s shape and threatened the defence. 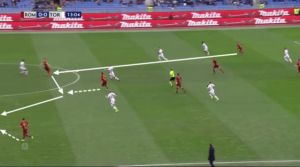 Zaniolo was once again instrumental in Roma’s attack. The youngster scored the opening goal and impressed with his positioning. Below, he drops out of Rincon’s shadow and finds space between the lines. Cristante finds him with a quick forward pass and Zaniolo turns into the huge space before playing the ball through. 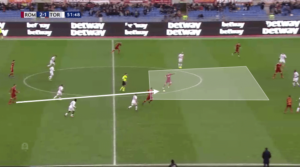 The combination of wide switches and line-splitting passes were key to the winning goal. Torino’s overload on the near side led to huge spaces on the Giallorossi’s left. Schick played the ball across for Pellegrini who had oceans of space outside Torino’s penalty area. He then slipped it between De Silvestri and Lyanco to El Shaarawy who scored the winner. 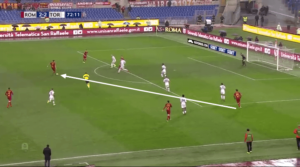 The game was sluggish and both teams looked rusty. The pressing schemes of both coaches were key in making the game chaotic. Di Francesco’s men eventually found a way to exploit Torino’s press to grab the winner in a five-goal thriller. Now both teams will look to improve their general play as they both look to fight for European places.

How Juventus could line up against Torino on Saturday afternoon

Enough depth: Inter should not see wing-back as a priority

Italian prime minister announces indefinite suspension of Serie A because of...

The Statistics: A win for Argentina against Bolivia in the Copa...