Cagliari have undeniably been the surprise package of this Serie A season and are fifth, shadowing Roma in fourth. On Monday night, they led Lazio for almost 80 minutes before Lazio completed an injury-time comeback to win the game 2-1. That elevated Lazio to within three points of the top spot after Simone Inzaghi’s team have also started the season extremely well. This tactical analysis will look at the tactics used by both teams in the restless encounter in Sardinia. 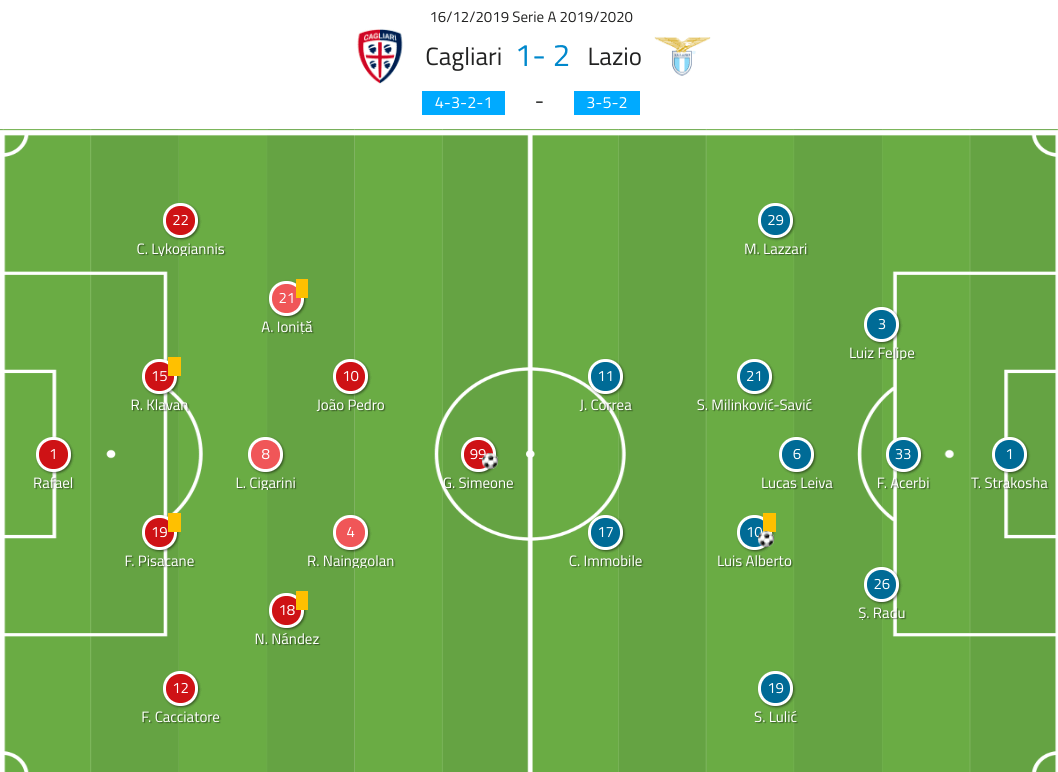 It was interesting to see how Rolando Maran lined his Cagliari team up in a shape that differed from their usual 4-3-1-2. Instead, Maran used João Pedro in a more withdrawn position alongside Radja Nainggolan with Simeone leading the line on his own. As we will see though, the front three’s positioning changed somewhat during the game.

Inzaghi organised Lazio in their usual 3-5-2/3-5-1-1 with Joaquín Correa playing slightly behind Ciro Immobile to create a midfield diamond at times with him at the tip, Sergej Milinković-Savić on the right, Luis Alberto on the left, and Lucas Leiva at its base.

As mentioned, Cagliari often set up in a 4-3-1-2 where Radja Nainggolan acts as the number 10 with the likes of Nahitan Nández, Marko Rog or Artur Ioniță on the sides of the diamond. For this game, Nández and Ioniță were used as the two outer central midfielders in Cagliari’s 4-3-2-1. As ever, Nainggolan often came deep for the ball and combined with Luca Cigarini in dictating Cagliari’s vertical passing style.

If you want to read the full tactical breakdown of this match report, head over to totalfootballanalysis.com or click HERE

How Roma have cleared their Monchi-mess with Petrachi this season

Eredivisie 2018/2019 Tactical Analysis: Matthijs de Ligt at Ajax and could...