Napoli are the main challengers to Juventus’s crown in Serie A this season and Saturday brought the first meeting between the two sides. The game was the epitome of the expression “a game of two halves” after Juve raced into a three-goal lead, only for Napoli to perform a spirited comeback to make it 3-3. In the dying minutes, Kalidou Koulibaly’s own goal decided the game in Juve’s favour. This tactical analysis will look at the main tactical trends from the game and why it ended as it did. This includes a look at Juventus’s attacking tactics, Napoli’s pressing scheme, Ancelotti’s second half changes and Juve’s new positional defensive style. 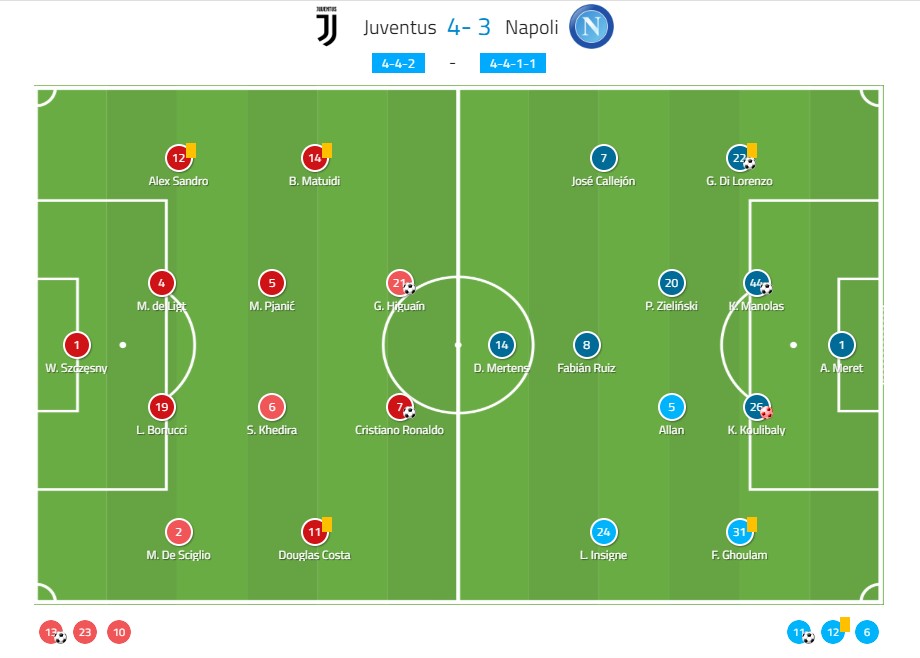 Juventus, coached by Giovanni Martusciello in Maurizio Sarri’s absence, started with almost the same side that beat Parma last week with Matthijs De Ligt replacing the injured Giorgio Chiellini as the only change. That meant Sami Khedira and Blaise Matuidi kept their places alongside Miralem Pjanić in midfield with Adrien Rabiot on the bench again.

Carlo Ancelotti made one change from the team that won 4-3 at Fiorentina on the opening weekend as Faouzi Ghoulam replaced Mário Rui in the XI. This meant we again saw Fabián Ruiz in a more attacking role with Piotr Zieliński and Allan acting as the double pivot.

The Data: Switzerland’s league title secured by win against over France

Why Koulibaly’s signing would mean a world of good for Manchester...

“I wish Klopp had been able to coach the “real” version...