Serie A returned with a bang this weekend as Gian Piero Gasperini returned to Genoa on Sunday and secured a welcome win for Atalanta against his former club. In a restless, entertaining encounter, Atalanta ran out 2-1 winners thanks to Duván Zapata’s late winner. This tactical analysis will look at the tactics of both teams, particularly their respective pressing systems and how they both looked to overcome those pressing schemes. 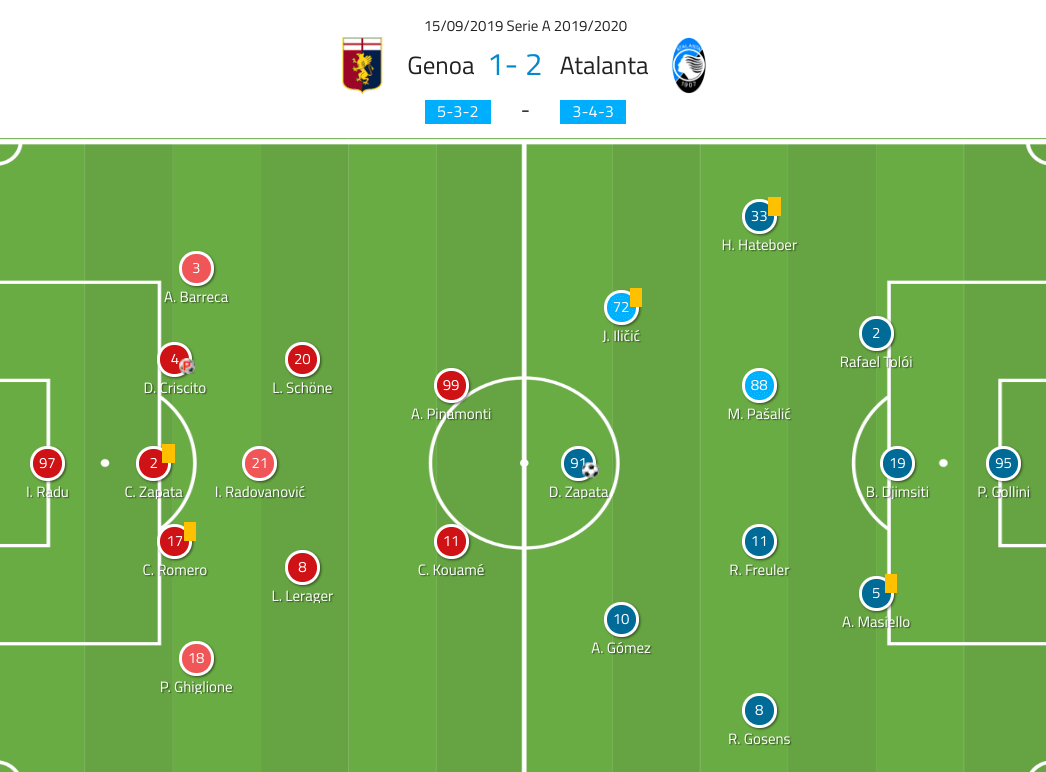 Aurelio Andreazzoli named the same team that defeated Fiorentina last time out which meant the encouraging strike partnership of Andrea Pinamonti and Christian Kouamé once again led the line for this Genoa bursting with energy. At the back, Cristian Zapata came up against his brother Duván.

Gasperini made one change from the team that narrowly lost to Torino last time out with Remo Freuler coming in for Marten De Roon. In attack, Luis Muriel once again found himself on the bench but he would come on and score the opener midway through the second half.

Genoa pressed with very clear man-orientations with the aim of stopping Atalanta’s effective build-up play. We can see this approach in the image below as all Genoa players mark an opponent. With Atalanta’s back-three, this meant Lukas Lerager was pushing up from midfield to mark Atalanta’s left-sided centre-back Andrea Masiello. If Lerager remained in midfield, Masiello or the central centre-back Berat Djimsiti would be left as a free man.

If you love tactical analysis, then you’ll love the digital magazines from totalfootballanalysis.com – a guaranteed 100+ pages of pure tactical analysis covering topics from the Premier League, Serie A, La Liga, Bundesliga and many, many more. Buy your copy of the August issue for just ₤4.99 here.

Gini Wijnaldum speaks for the first time after joining Roma

The Data: Tough game ended in win for Genoa over Cagliari

Could we see a return to the glory days of Serie...