Marco Giampaolo’s Milan secured a vital win at Genoa to start what they hope will be a run of better results than the first six games had yielded. In a tough Serie A game, goals from Theo Hernandez and Franck Kessié turned the game around and gave Milan a 2-1 win. This tactical analysis will look at the tactics used by both sides, focussing on Milan’s build-up play, Genoa’s pressing, and Milan’s largely impressive defending. 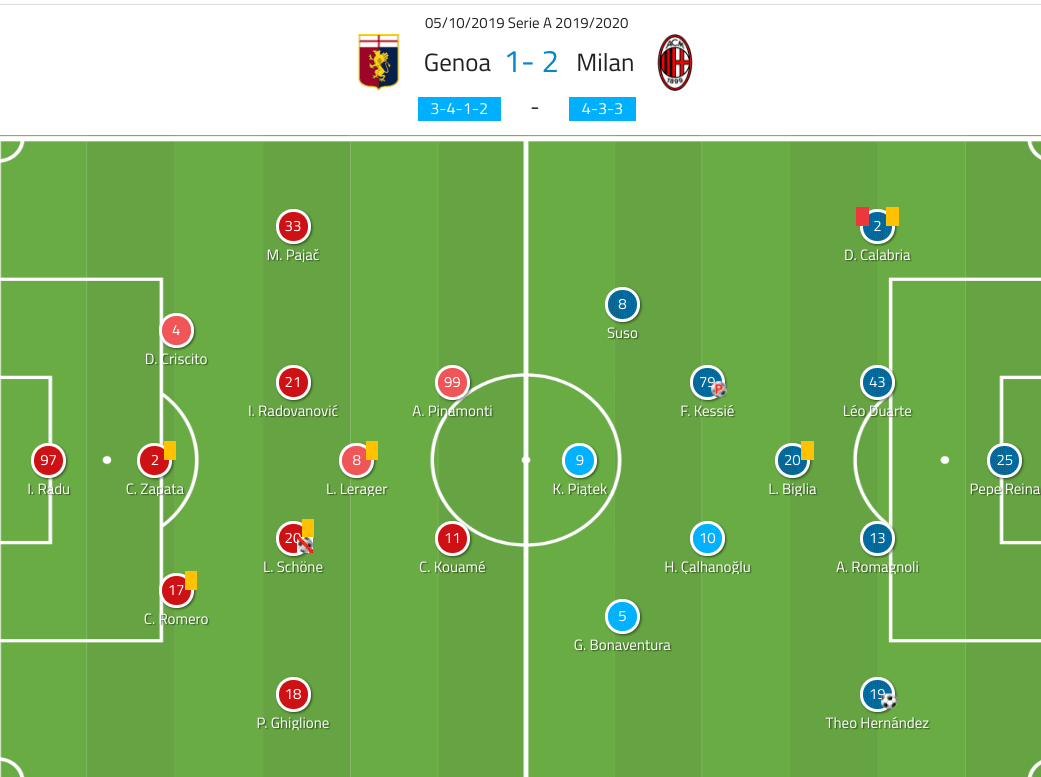 Aurelio Andreazzoli fielded a Genoa side that looked very much like the ones they have done in the opening matches. The only surprise was the inclusion of the Croatian wing-back Marko Pajač on the left wing.

Giampaolo, however, changed from his normal 4-3-1-2 into a 4-3-3 in which Suso and Giacomo Bonaventura started either side of Krzysztof Piątek in the attack. At the back, Léo Duarte started alongside Alessio Romagnoli at centre-back.

Under Giampaolo, Milan deploy a positional defence where space and the position of the ball are prioritised above marking opponents. They defended very well against Genoa and largely kept the home side’s possession in areas where Milan were happy for them to have the ball. Giampaolo always wants his team to cut off central access for the opposition and we saw signs against Genoa that he is making this team his own.

In the image below, we can see Milan’s defensive setup. They defended and attacked in a 4-3-3 rather than their normal 4-3-1-2 Giampaolo prefers, yet his principles remained.

If you love tactical analysis, then you’ll love the digital magazines from totalfootballanalysis.com – a guaranteed 100+ pages of pure tactical analysis covering topics from the Premier League, Serie A, La Liga, Bundesliga and many, many more. Buy your copy of the September issue for just ₤4.99 here

Roma International watch: How Roma’s squad have performed for their national...

Can Lukaku Discover His Best Form Back at Inter?

The Statistics: A win for Belgium against Finland in the Euro...