Juventus made sure they go into next weekend’s top of the table clash with Inter in good form thanks to their 2-0 win over SPAL in Serie A. The win was delivered despite the personnel struggles Juventus had to endure in defence, which saw Blaise Matuidi and Juan Cuadrado line up as full-backs. This tactical analysis will look at the tactics used by both sides with the focus being on the mechanisms of Juventus’s midfield diamond, SPAL’s defensive setup and SPAL’s build-up methods. 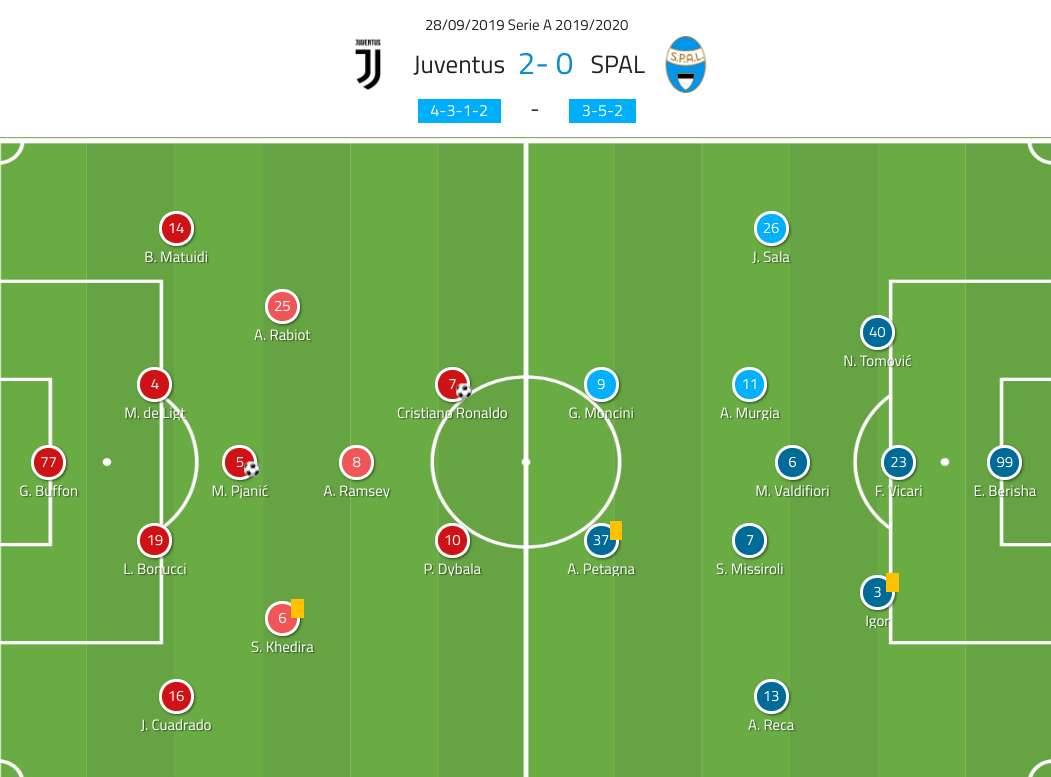 Maurizio Sarri maintained the 4-3-1-2 shape he used at Brescia in midweek, but it was a makeshift side with Matuidi and Cuadrado each at full-back. Aaron Ramsey again started as the tip of the diamond with Miralem Pjanić at its base. In attack, Sarri paired Cristiano Ronaldo with Paulo Dybala.

Leonardo Semplici’s SPAL started in their usual 3-5-2. The most eye-catching decision was the inclusion of Gabriele Moncini alongside Andrea Petagna in the attack. The inclusion of Mirko Valdifiori as the deepest of the three central midfielders provided an interesting side story since Valdifiori was such an important player for Sarri’s Empoli and someone who Sarri brought along when he had made the move to Napoli.

Tactical analysis: Juventus’s 4-3-1-2, their struggles, and their solutions

As mentioned, Sarri decided to retain the 4-3-1-2 which secured him a win at Brescia in midweek.

If you love tactical analysis, then you’ll love the digital magazines from totalfootballanalysis.com – a guaranteed 100+ pages of pure tactical analysis covering topics from the Premier League, Serie A, La Liga, Bundesliga and many, many more. Buy your copy of the September issue for just ₤4.99 here

In defence of Rabiot: The Frenchman needs time at Juventus

‘Part of the foundations’ – Conte’s backing shows youngster has a...