This article originally featured on totalfootballanalysis.com, our flagship analysis site covering managers, players and matches from all over the globe.

Everything was at stake for Tottenham against Inter at Wembley on Wednesday. Only a win was enough to make their aim of qualifying for the last 16 of the Champions League a reality. Luckily for the Londoners, they managed to beat Inter with a late Christian Eriksen winner. It was an even match which could have gone either way but Spurs got the vital win. This tactical analysis will look at the tactical trends of the game, particularly Mauricio Pochettino‘s active match coaching.

Tottenham came into the game with a 4-2-3-1 formation with Christian Eriksen surprisingly on the bench. Lucas Moura and Erik Lamela were instead preferred either side of Dele Alli. Inter saw the return of Marcelo Brozovic to the team as they also sat up in a 4-2-3-1 with the Croatian joining Matias Vecino in midfield behind Radja Nainggolan. 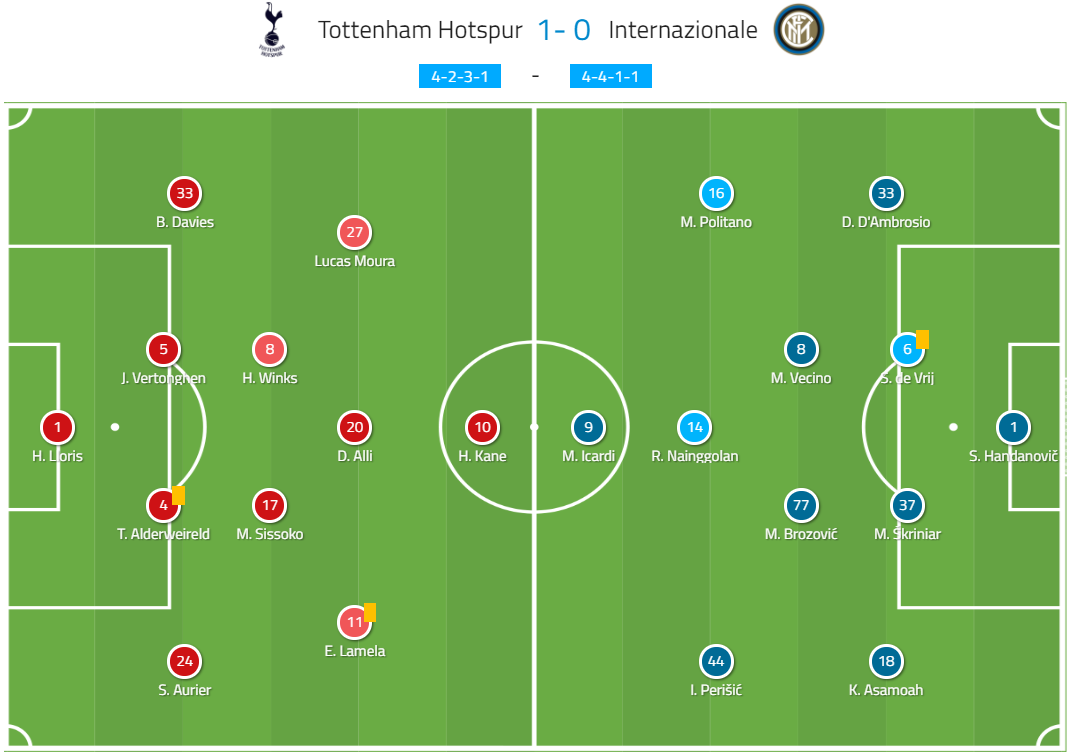 Both teams’ movements in possession

Both sides showed some interesting movements in possession. Mostly it was Tottenham who showed different rotations to cause Inter some confusion. In the build-up phase, Tottenham would have one of the two central midfielders, Moussa Sissoko or Harry Winks, drop outside of the two centre-backs. This created a 3 vs 2 against Inter’s first line of pressure to help with the progression of the ball. In truth, Inter were quite passive in their pressure and dropped deeper than expected. Still, the movements were important in allowing Tottenham to gain access to the wide areas which were often exploited as they looked to attack. Below we see how first Sissoko and then Winks drops outside the centre-backs to get on the ball. 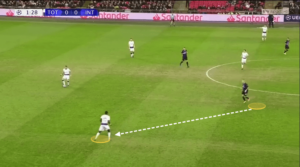 Above you see how Sissoko has dropped out of his central position into the space vacated by the right-back Aurier as the Ivorian pushed forward. Below you see Winks dropping in that space on the left with Ben Davies having gone higher. 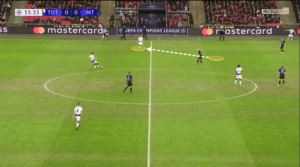 Further up the pitch, we saw another interesting rotation as Erik Lamela moved inside from his position on the right wing. This was natural due to Aurier playing so high up the pitch. Lamela would move into the right-sided half-space behind Brozovic. This created a 4 vs 3 advantage for Tottenham in midfield. Below we can see the contrasting positions picked up by Lamela (yellow) and Lucas Moura (white) on the left. The Brazilian always stayed wide while Lamela came inside. 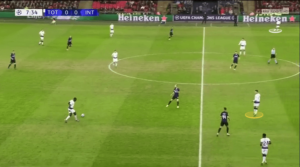 With Sissoko and Winks in central midfield and Lamela and Alli in either half-space, Spurs should, in theory, have had a strong advantage in midfield. On occasions they did, as the situation below when Winks found Lamela between the lines, but mostly Inter defended that space quite well and forced Spurs wide. 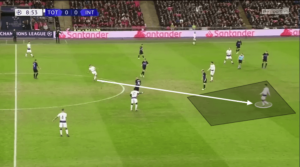 Inter usually rotate quite a bit with Matteo Politano in particular usually having a free role to come inside from the right. They were quite rigid in their positioning at Wembley though. One rotation that did catch the eye and caused Tottenham problems were the countermovements between Politano and Vecino in particular. We have one such example below.

Vecino moved from midfield into the space behind Tottenham’s left-back Ben Davies. At the same time, Politano moves towards the ball. This leaves Davies in a selection dilemma where he correctly often decided to stay deep to pick up the run of Vecino and allow Politano to pick up the ball. These countermovements helped Inter escape Tottenham’s press though. 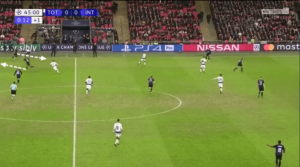 Tottenham are famous for their high-pressing and did well against Chelsea at the weekend. But Inter were clever to withstand that pressure. Below I’ll look at Tottenham’s pressing schemes which changed throughout the game and how Inter managed to beat the press.

The first example comes from early on in the game as Tottenham commit players forward to press Inter high. As you can see they are very man-orientated in their press. Milan Skriniar doesn’t panic in possession though. 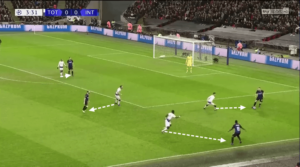 The Slovakian defender chips the ball into Perisic who lays it off to Brozovic with one touch. The Croatian can then run into a huge space in midfield left vacated by Tottenham committing so many players higher up. 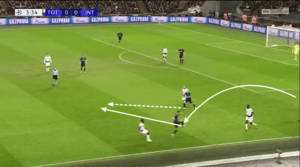 Brozovic was a big problem for Spurs early on. The Inter midfielder managed to break the Spurs press on a number of occasions thanks to his ability to keep the ball in tight situations and dribble out of pressure. As highlighted below, Tottenham defended in a fairly standard 4-3-3 from the start which allowed the Croatian too much space and time at the base of Inter’s midfield. 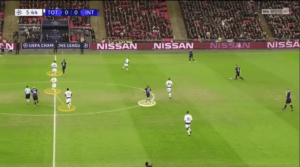 Pochettino sought to change this after about 25 minutes. He changed Alli’s position to a more normal number 10 role and pressed in a 4-4-2 instead. Alli would now join Kane in the first line to block passes into Brozovic. The new setup looked as imaged below. 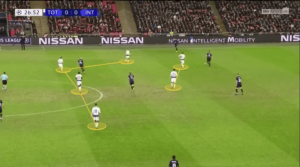 As Spurs continued to fail to get a grip of Brozovic, Pochettino decided to have Alli essentially man-marking the Croatian. For the remainder of the first half, it often looked like below as Alli followed Brozovic around when Inter looked to build attacks from the back. 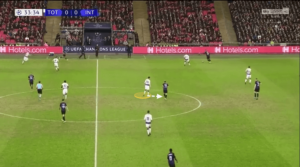 After Son came on and replaced Lucas, Pochettino changed his setup again, this time to a diamond with the South Korean joining Kane up front. Lamela then played as the number 10 and took over Alli’s role of marking Brozovic with Alli dropping into the midfield three with Winks and Sissoko. The setup can be seen below. 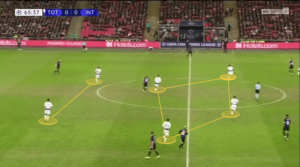 Luciano Spalletti had evidently learned from Tottenham’s win over Chelsea as Inter rarely got stuck in Spurs press. Instead, they often played the ball over the press and looked for layoffs or flick-ons to progress further when needed.

One such example is the scene below with Perisic having come inside to reach a long ball from the back. The Croatian then headed the ball in-behind for Icardi who was tripped by Aldeweireld when running through on goal. 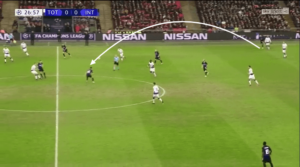 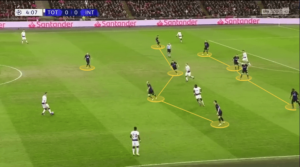 When defending deeper areas Inter were really compact and difficult to play through. On a few occasions, Spurs managed to break through did they so by Sissoko or Winks running with the ball and beating an opponent in midfield. Otherwise, Inter’s defending was spot on. Perisic often dropped in as a fifth defender when defending deep to help Inter get better access to the wide areas too. The two central defenders Skriniar and Stefan De Vrij had excellent games and really impressed with the way they handled Harry Kane. 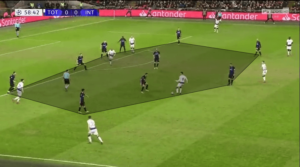 Inter produced a good away performance but were undone by that late goal after a strong run from Moussa Sissoko. Inter will rue their failure to defend that situation better. Still, the Nerazzurri maintain a good chance to qualify. If they beat PSV at home Tottenham will be forced to win at Barcelona. For Spurs, confidence will have gone up further ahead of the North London derby on Sunday. It promises to be a feisty derby at the Emirates.

If you love tactical analysis, then you’ll love the new magazine from totalfootballanalysis.com – 118 pages of pure tactical analysis covering topics from the Premier League, Serie A, La Liga, Bundesliga and many, many more. Get your copy today for just £4.99 here!

Serie A clubs are monitoring Emerson

Biraghi or Asamoah: Conte has big decision to make at Inter

How Atalanta slayed the giants in the Coppa Italia