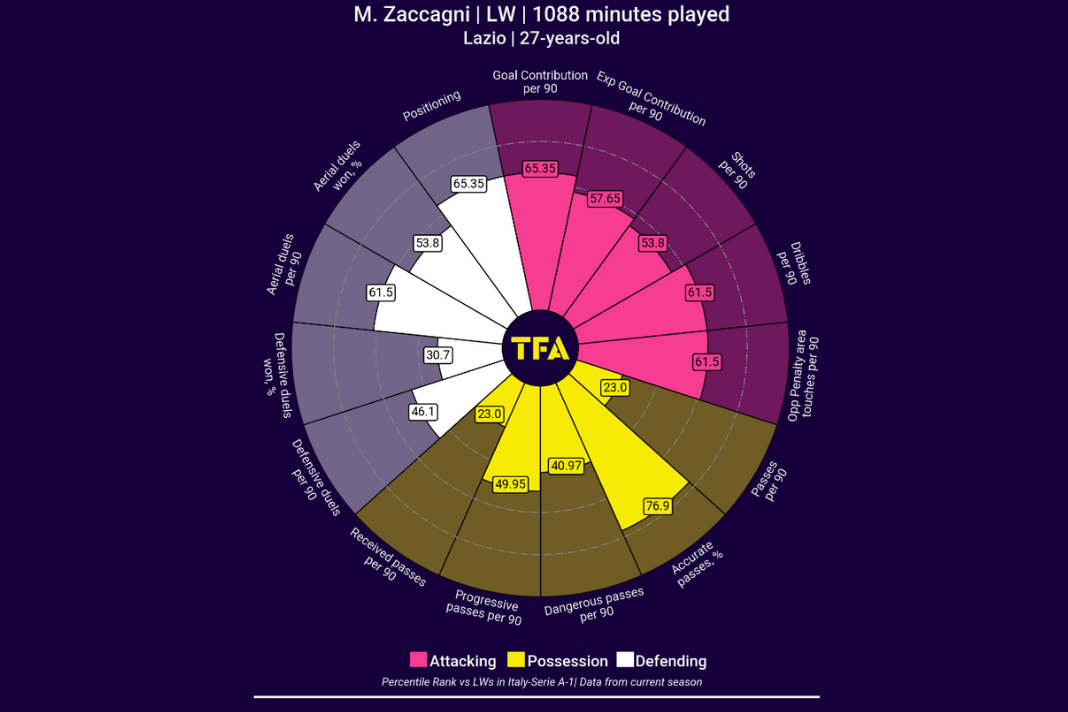 One player who has come under the spotlight in the last few seasons as a big surprise in Serie A is the 27-year-old Italian left-winger Mattia Zaccagni. He has regularly been one of the best performers for Maurizio Sarri’s Lazio from the start of the last season. Zaccagni also debuted for the senior Italian national team this year in March. Mattia Zaccagni has been an essential player for Lazio this season, scoring five goals and providing three assists in the 13 appearances in Serie A. The 27-year-old Italian has been among the best left-wingers in Serie A and the top five European leagues. 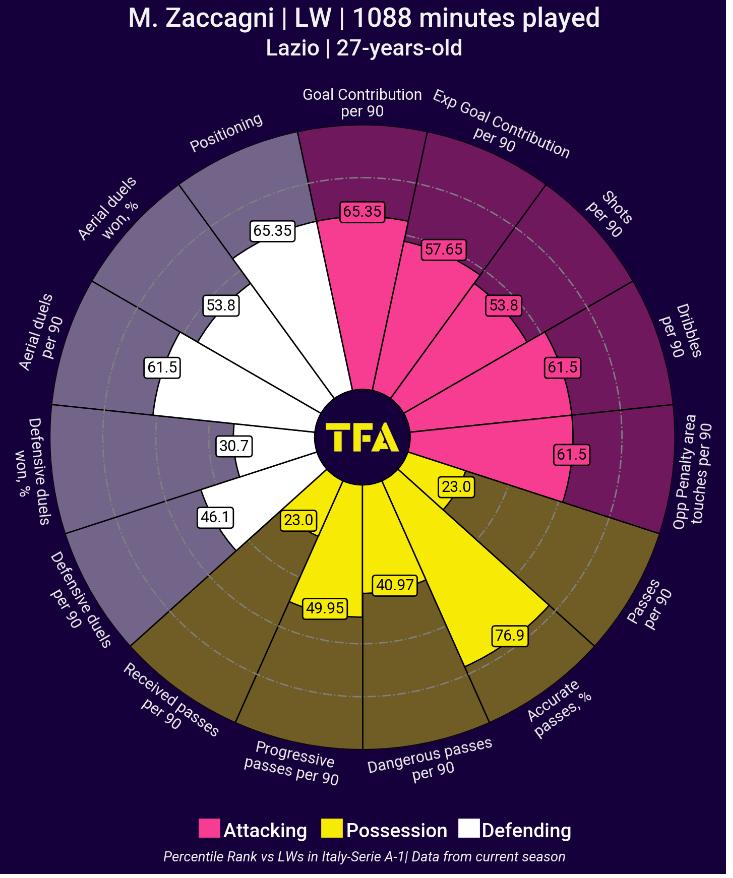 Mattia Zaccagni has been integral to Maurizio Sarri’s Lazio side. The player mainly attacks from the left wing and tries to cut inside and have a go towards the goal whenever possible. The 27-year-old Italian left-winger has made 13 appearances in Serie A this season, scoring five times and assisting three. The above viz shows the stats of the player in comparison to the other players featured as left-wingers in Serie A this season. It can be observed that Zaccagni has dominated in the accurate pass % stats. Other stats where he has been dominant are goal contribution per 90, positioning, and dribbles per 90. 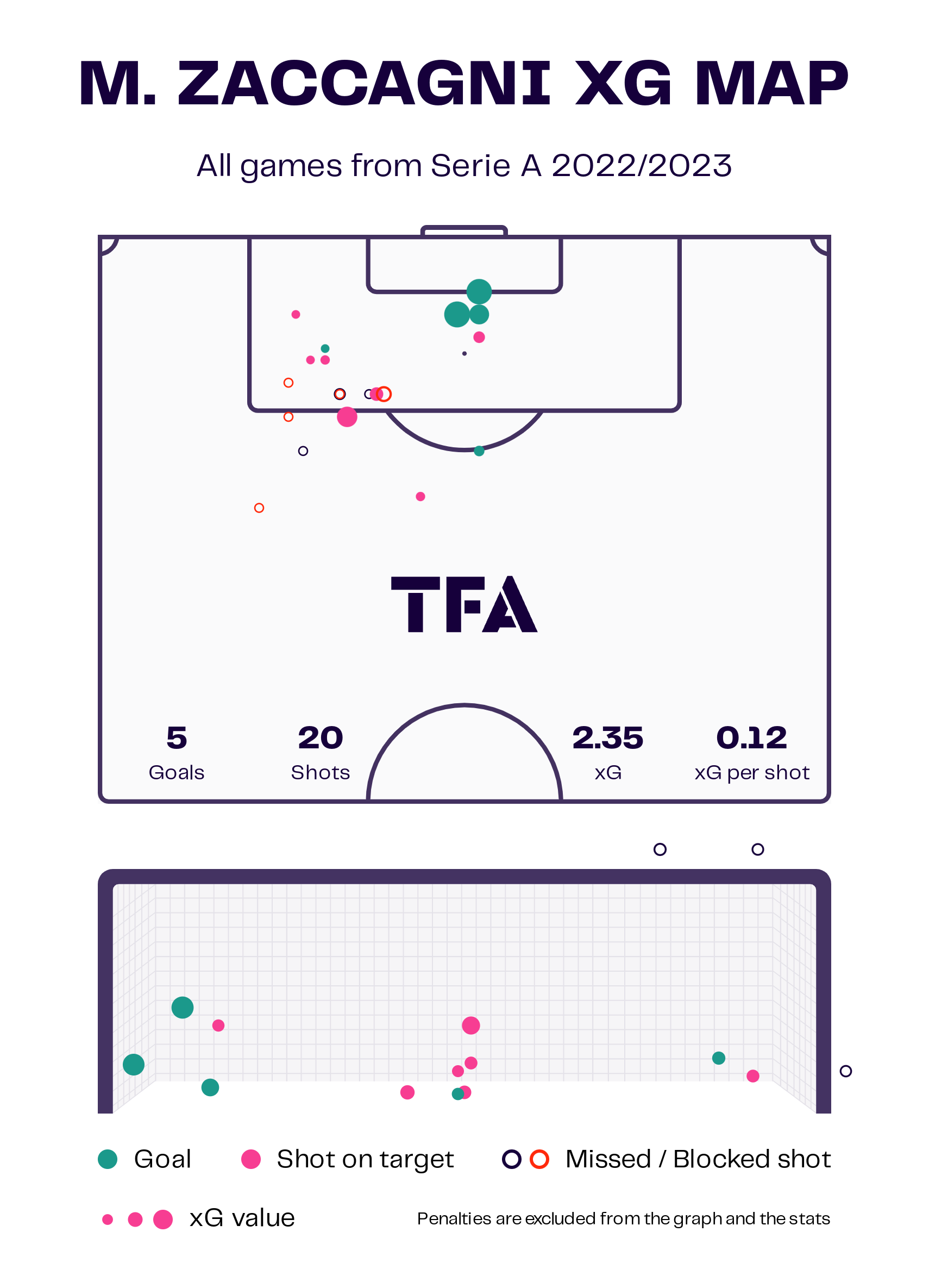 Mattia Zaccagni has added five goals to the Lazio side this season in the Italian Serie A, averaging 1.7 shots per game. The player also averages 0.9 shots on target per game. The above viz shows the shot map of the forward in the Italian Serie A. Mattia Zaccagni has taken most of the shots coming inside from the left wing through the midfield, with almost every shot coming from inside the penalty box. The shots are primarily targeted towards the centre or right of the keeper. The Italian has also overperformed his xG till now, scoring five goals from the xG of just 2.35. 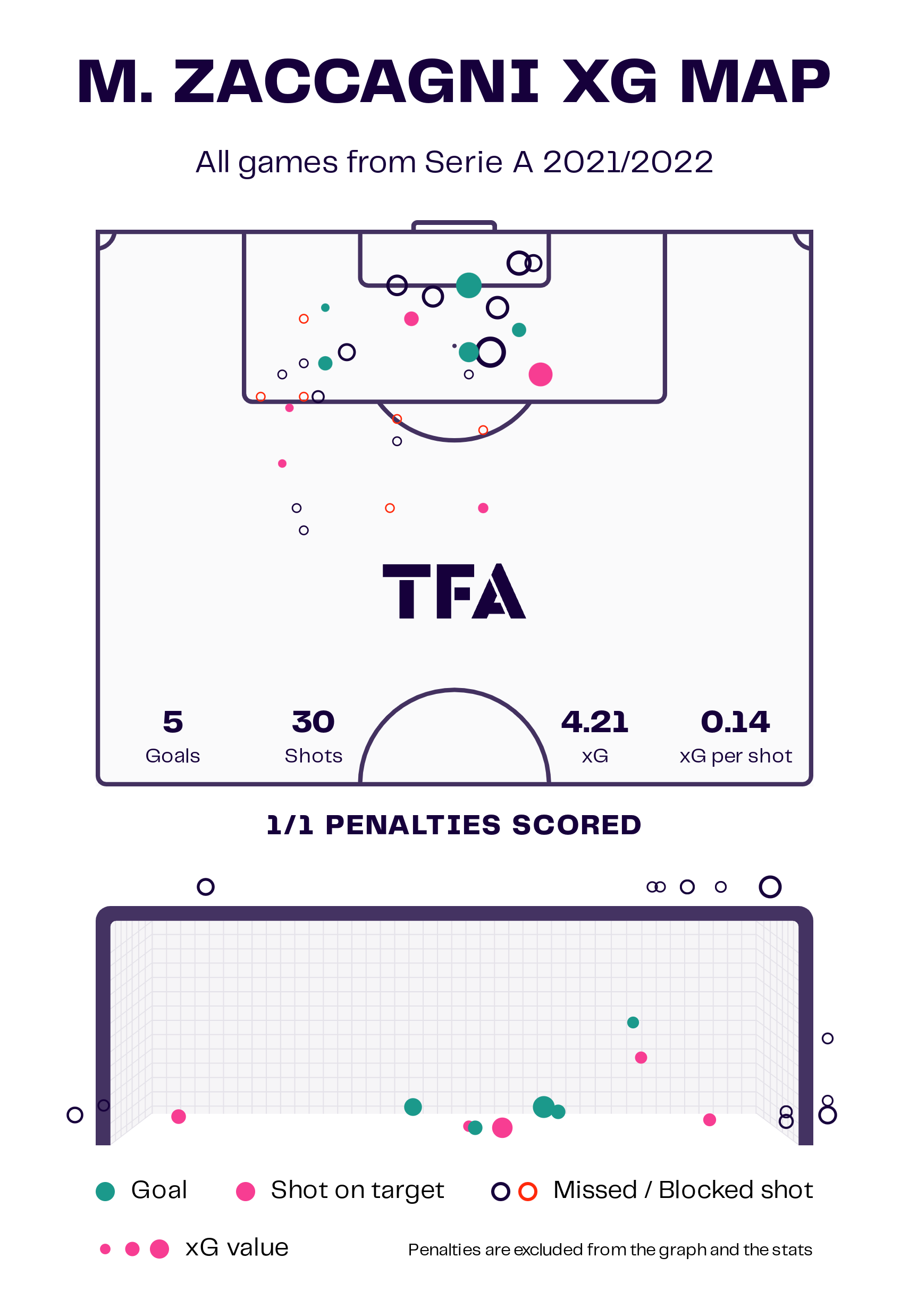 Mattia Zaccagni has significantly improved from last season, especially in converting his xG. During the previous season, Zaccagni scored six goals and provided five assists. The shots per 90 minutes average 1.2, and the player also averages 0.4 shots on target per game. The 27-year-old Italian left-winger netted five of the 30 attempts for the Lazio side last season. He is on course to break the record of six goals he scored last season, already scoring five times this season. 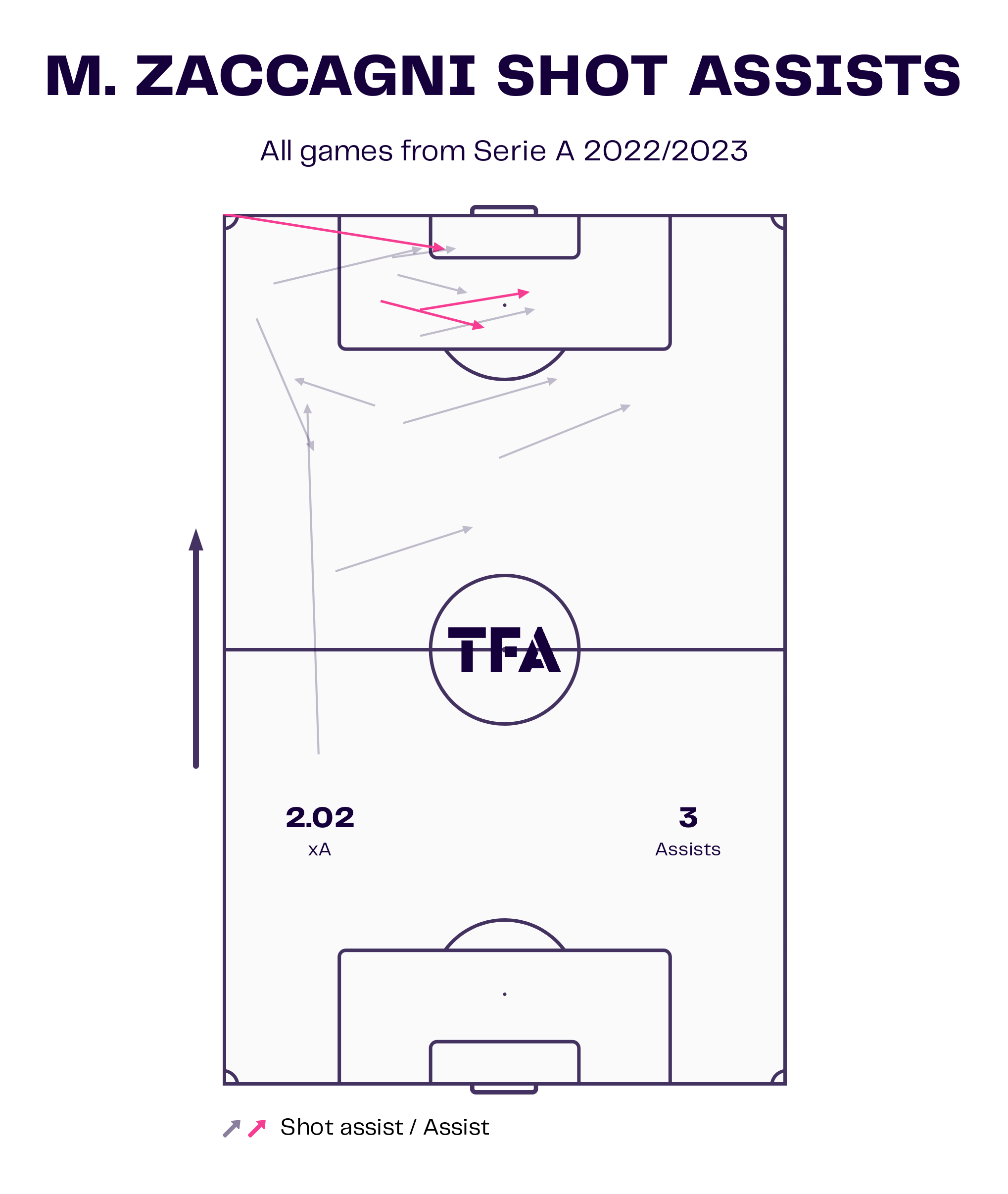 Mattia Zaccagni has always contributed to the Lazio side by providing assists and helping them create goal-scoring opportunities. The Italian already has three assists to his name this season. Zaccagni has a reasonable enough accuracy rate of 84%. Zaccagni averages around 1.0 key pass per game and have provided three assists in the Serie A this season, which is significantly appropriate for a left winger. 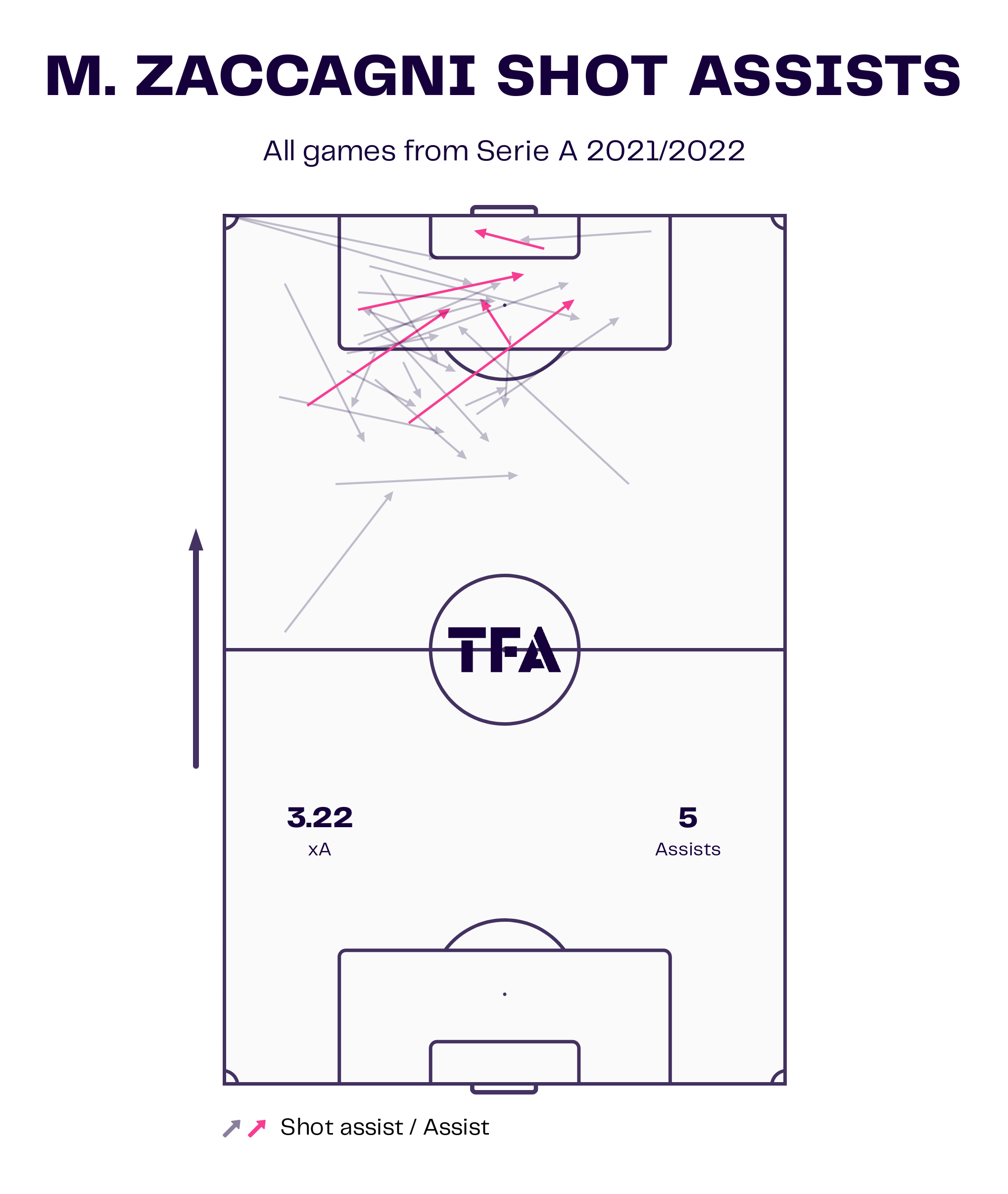 Mattia Zaccagni has shown a good improvement from last season, providing three assists already in his 13 appearances. The 27-year-old Italian is on course to break the record of five assists he provided in the previous season of Serie A. 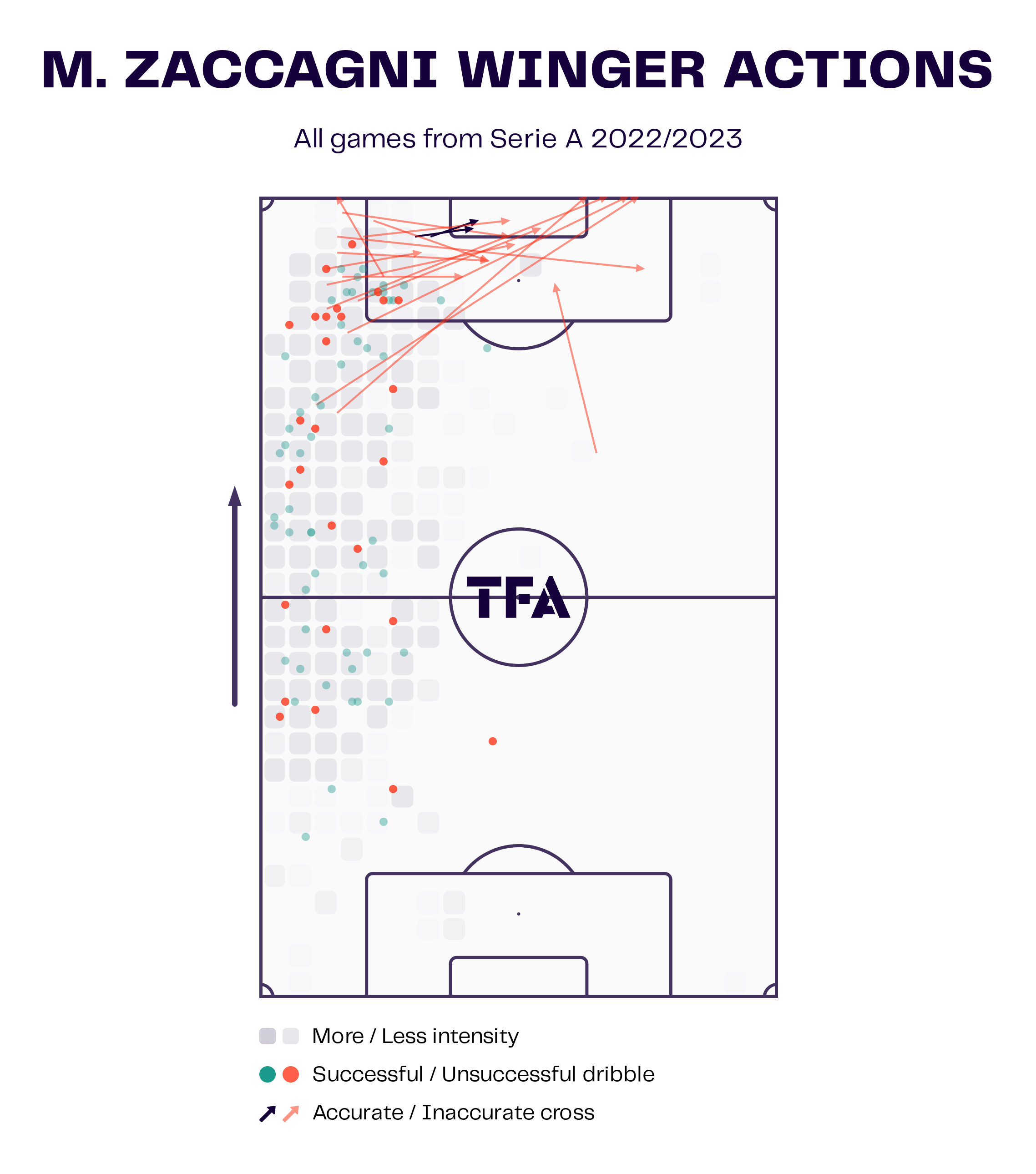 Mattia Zaccagni plays like a modern inside-forward left winger who always likes to come inside from the left side of the midfield whenever possible. He also crosses the ball into the 18-yard box and provides goal-scoring chances for the attackers whenever possible.

Lazio will be happy with the performance of 27-year-old Italian Mattia Zaccagni so far this season. Mattia Zaccagni has been a significant part of this Lazio side. His eight goal-scoring contributions have helped Lazio make a great start in the 2022–23 Italian Serie A season. The Italian will look to continue this form post-World Cup, create and score goals for his team, and dominate the games from the left wing for his team.