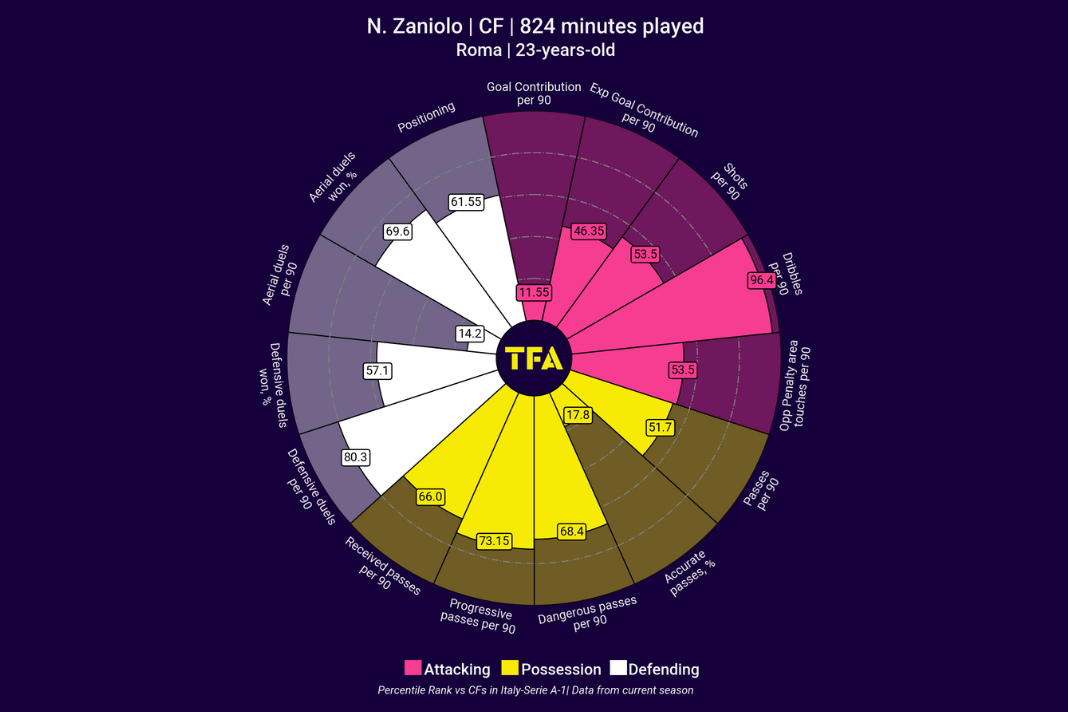 One youngster who has always been in the limelight since his debut in Serie A is Nicolo Zaniolo, a 23-year-old Italian forward. After capturing cruciate ligament rupture in two back-to-back seasons in 2019–20 and 2020–21, he has found it challenging to get back to his best form. Nicolo Zaniolo is having another disappointing season, scoring only one goal and providing zero assists in 11 Series A appearances. Napoli is interested in the 23-year-old forward if he doesn’t renew his contract with Roma. 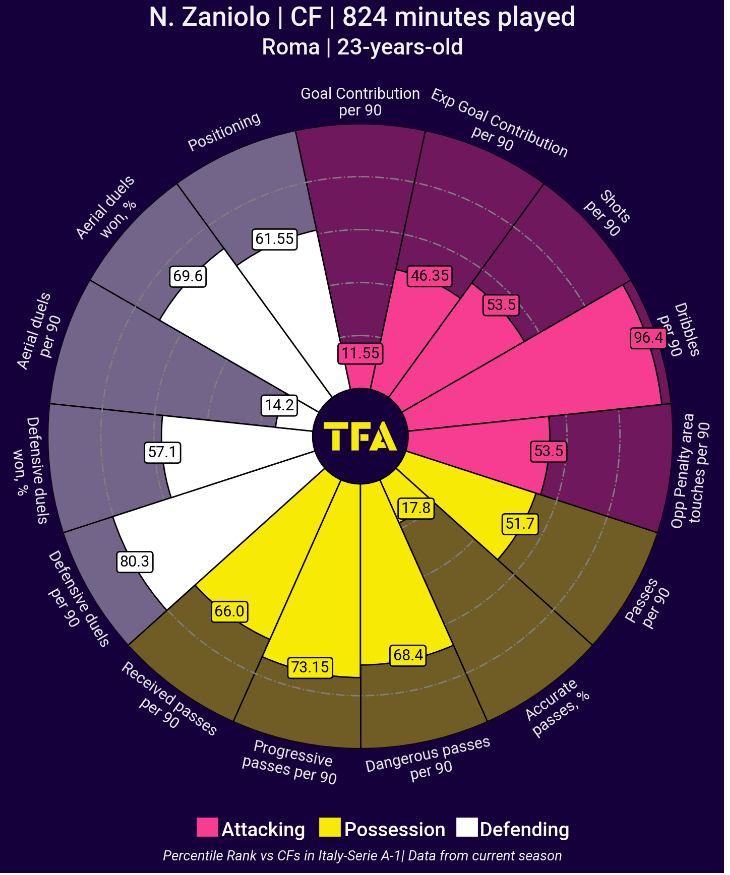 Nicolo Zaniolo has been an exciting prospect for Roma’s side, but he has been unable to convert that talent into performance. The above viz shows the stats of the player in comparison to the other players featured as central forwards in the Italian Serie A. It is clear that Zaniolo has been extremely dominant in dribbles per 90. Other areas where the 23-year-old Italian forward has been dominant are defensive duels per 90 and progressive passes per 90.

Penetrating Carries into the Box 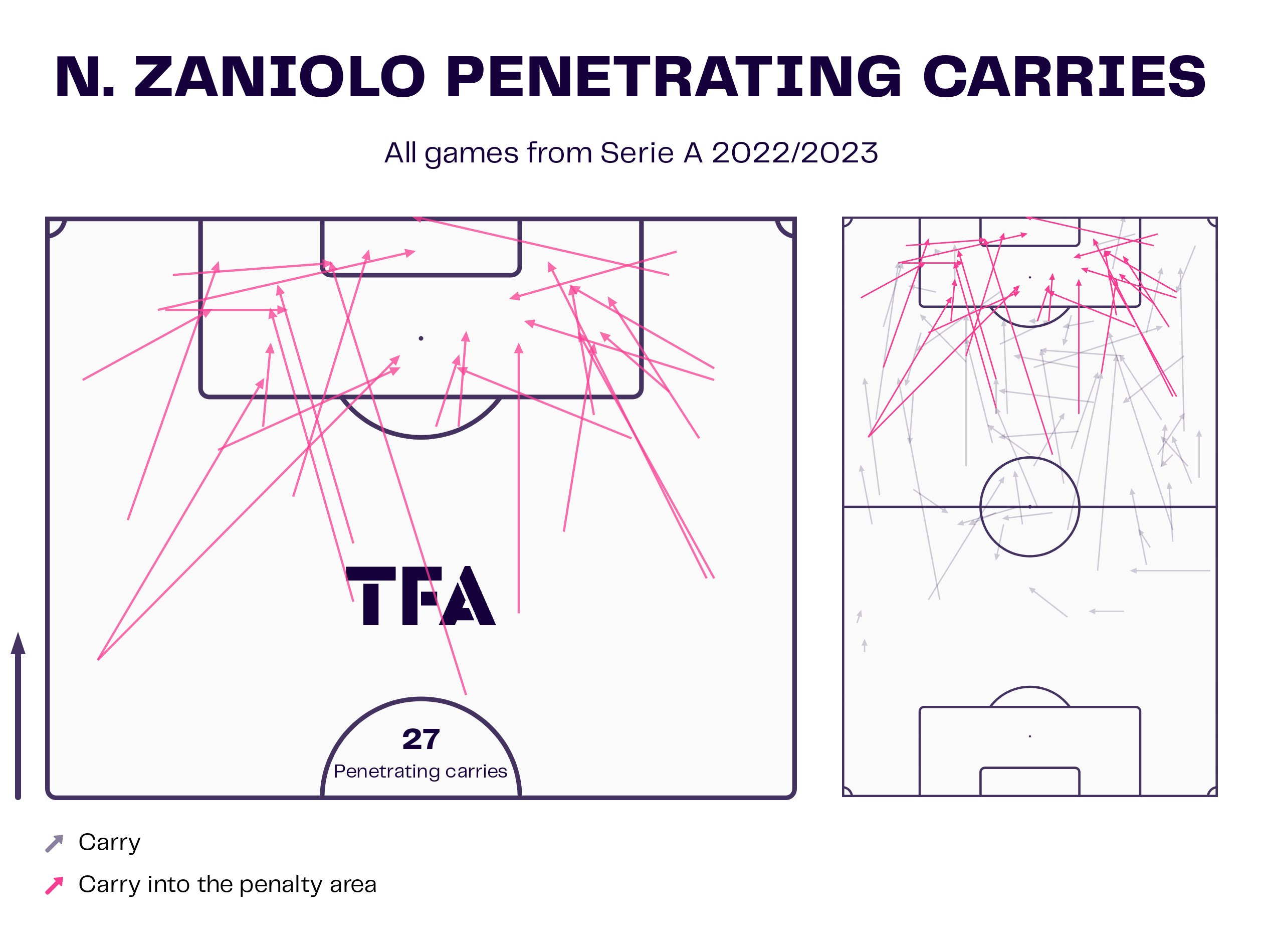 Nicolo Zaniolo is an attacking midfielder who likes to carry the ball from the midfield into the penalty box. So far, he has made 27 penetrating carries into the box in 11 Serie A appearances. The Italian attacker has made 7.5 dribbles per 90, which is relatively high for any centre forward. He needs to turn these dribbles and penetration carries into some output to increase his output, as he only got one goal. 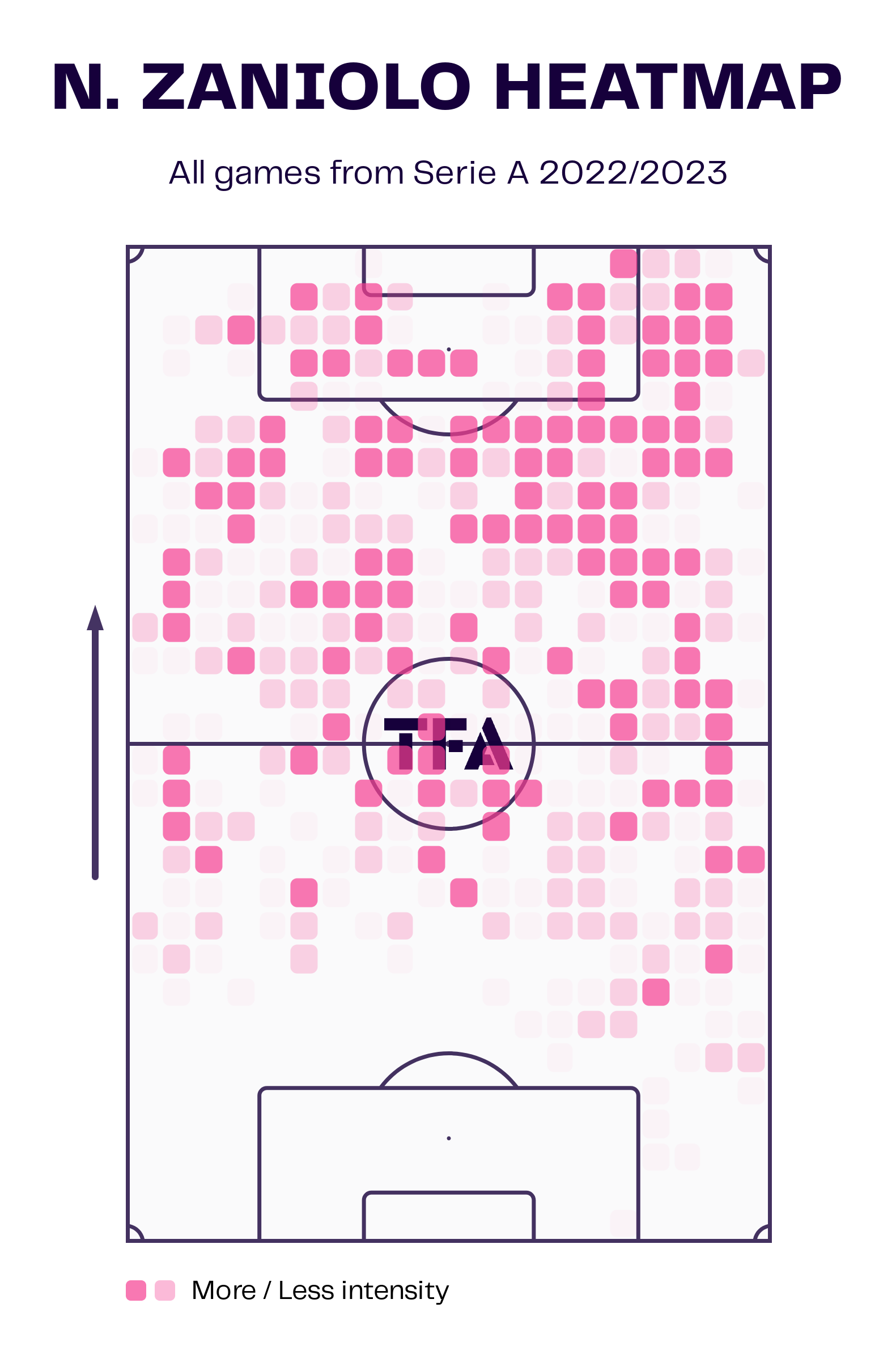 Nicolo Zaniolo is an attacker who likes to work hard with and without the ball. With his strong left foot, he wants to cut inside and attempt shots to score a goal. If Zaniolo improves his output and realizes his potential, he can become the talisman for any club in the world and the Italian national team.

What Will Nicolo Zaniolo bring to this Napoli side 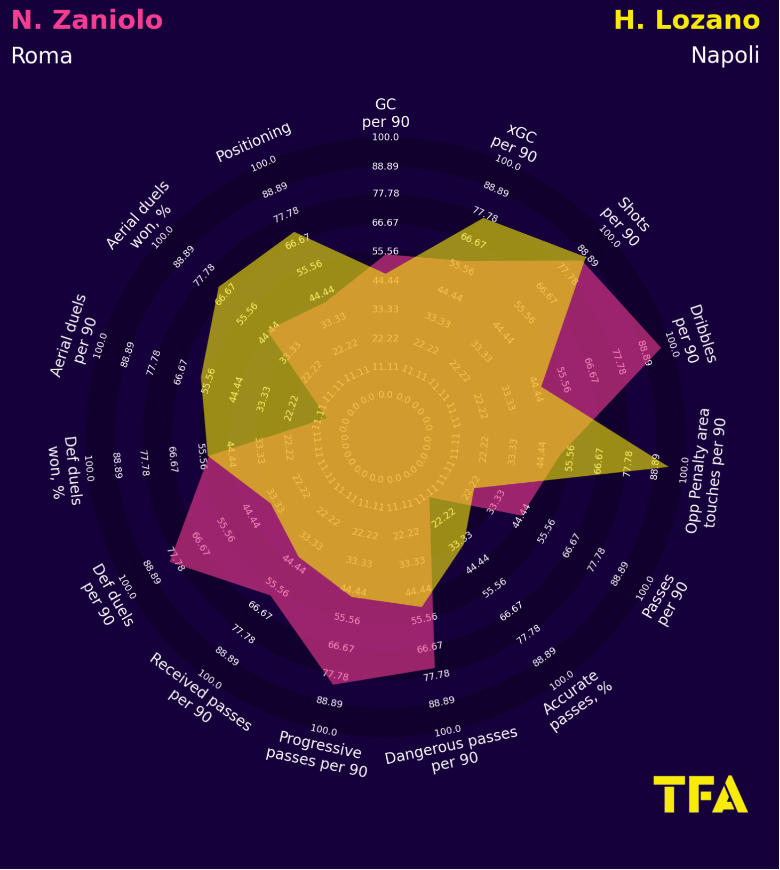 Napoli is looking for a backup attacker who can play as a winger or even centre-forward when required for the team. If Zaniolo joins Napoli, he could pose a tough challenge to Mexican winger Lozano. Zaniolo dominates Lozano in various stats, such as dribbles per 90, passes per 90, progressive passes per 90, received passes per 90, and defensive duels per 90. These stats show that Zaniolo has the potential and ability to get into Napoli’s lineup and replace Lozano.

Struggles in front of the goal 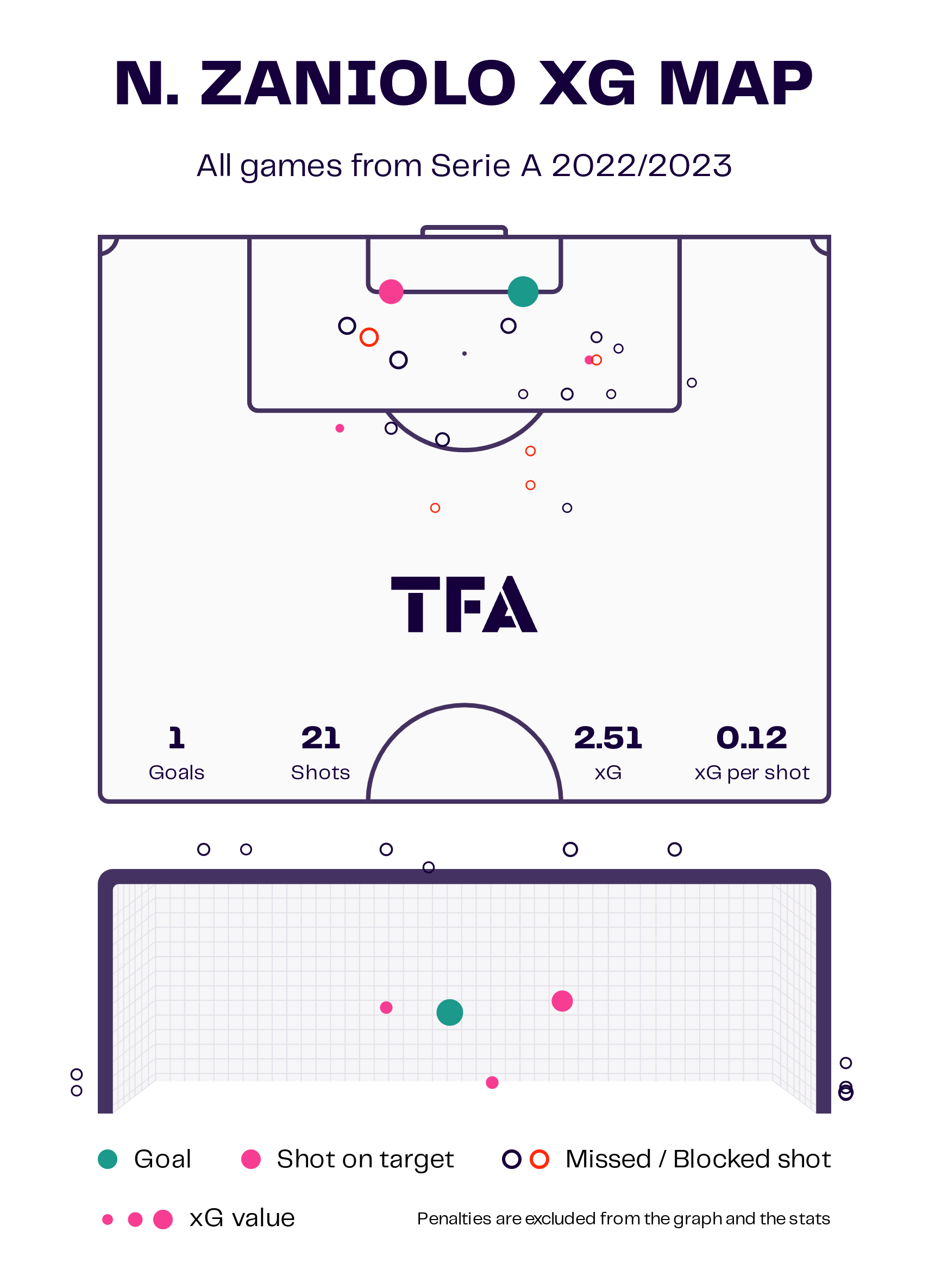 Nicolo Zaniolo and Roma have struggled a lot in front of goal.The I Giallorossi have scored 18 goals with an average of 1.2 goals per match, which is comparatively less than the other big Serie A clubs this season. The Italian has a shot conversion rate of just 4.5%, which is relatively low for any excellent attacker in front of the goal. He has scored just one goal from the 21 shots he has attempted this season. He has also missed five big-scoring chances in this Serie A season.

Nicolo Zaniolo has been a hot prospect in Serie A and around the world for the last few years. Napoli wants an attacker who can provide them with good squad depth when Lozano and Khvicha Kvaratskhelia need to be rested or are injured. The attacking style of Luciano Spalletti can help 23-year-old Italian centre forward Nicolo Zaniolo realise his potential and make him a superstar. He has been unable to find his best form under Jose Mourinho, known for his defensive and counterattacking gameplay style. The transfer of Nicola Zaniolo to Napoli makes sense for the player and the club.

AC Milan’s move for Todibo could work out best for all...

UEFA Champions League 2021/22: The stats behind Liverpool’s comeback vs AC...