Home Analysis Under the microscope: How Paulo Dybala has settled into Jose Mourinho’s Roma 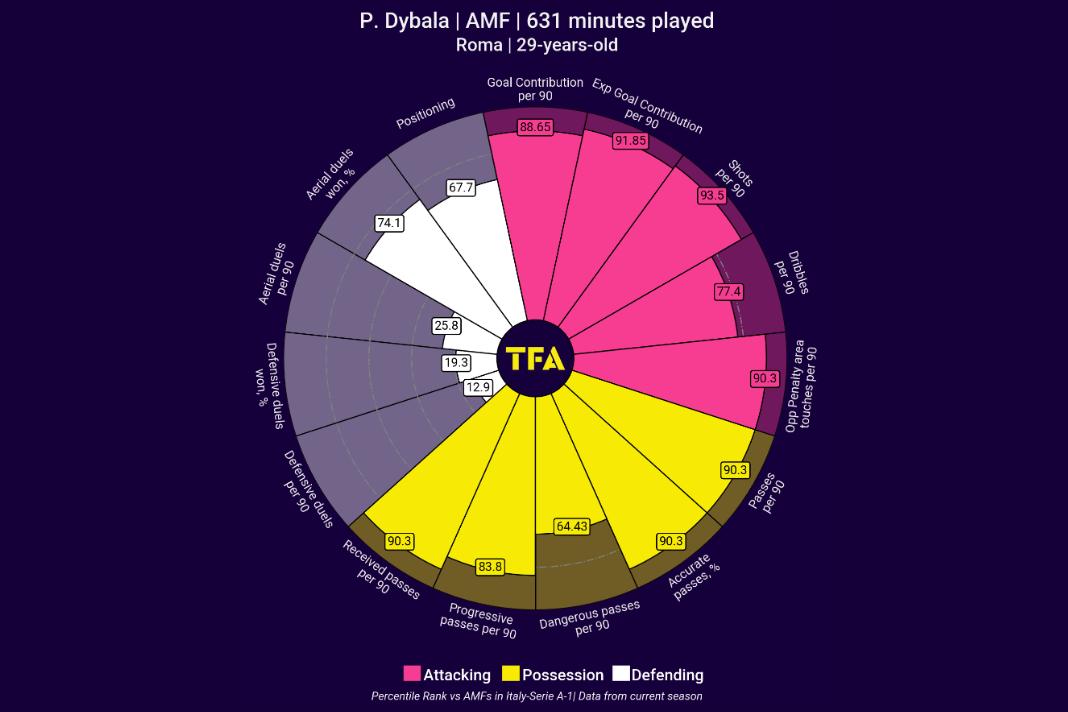 One player who has been impressive in Serie A over the last decade is the 29-year-old Argentinian forward Paulo Dybala. Dybala joined Roma from Serie A club Juventus on a free transfer during the summer transfer window. After his performance for the inconsistent Roma side in the current Serie A campaign, Dybala has become a fan favourite among the Roma fans. The Argentinian forward recently won the Qatar World Cup 2022 with his Argentina side. Paulo Dybala has been an exceptional performer for Roma this season, scoring five goals. We will now look at stats showing what Dybala brings to this Roma side. 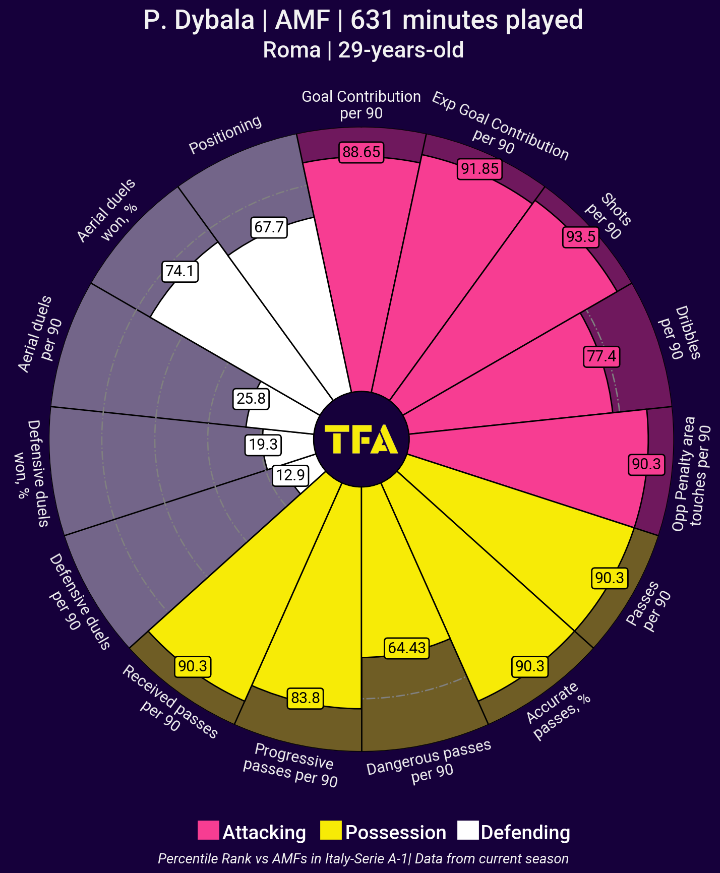 Paulo Dybala has been an integral part of the Roma side. The 29-year-old Argentinian forward has scored five goals and provided two assists in Serie A this campaign. The above viz shows the stats of the player in comparison to the other players featured as attacking midfielders in Serie A this season. It can be observed that Dybala has dominated the shots per 90 stat. Other stats where Dybala has done well are passes per 90, opponent penalty area touches per 90, expected goal contribution per 90, goal contribution per 90, and received passes per 90.

Dybala in front of the goal 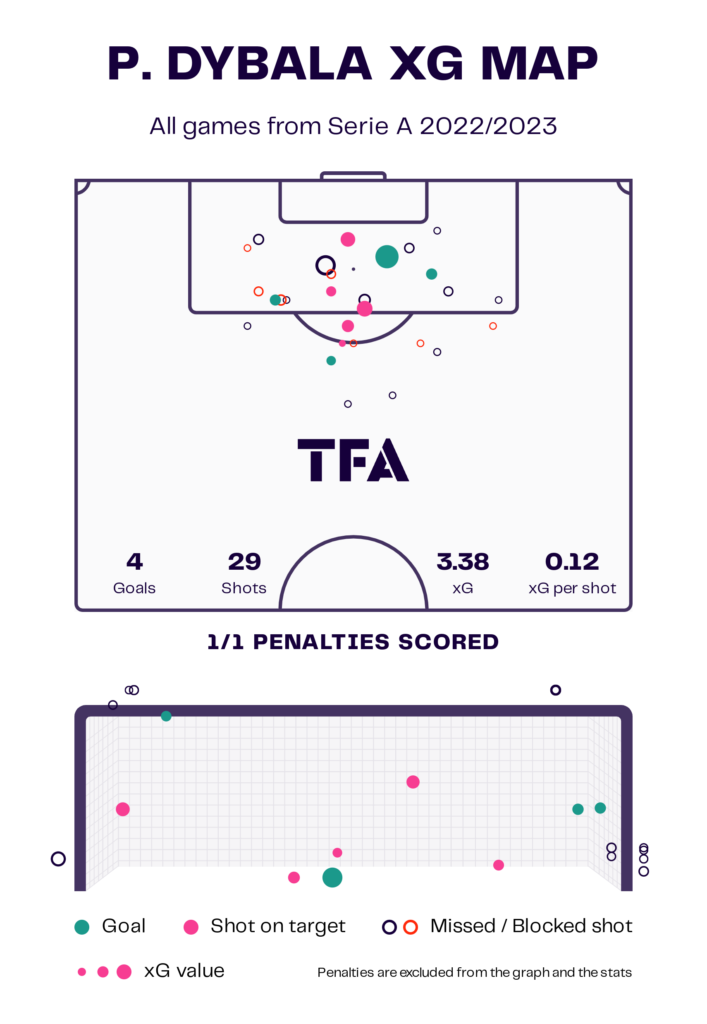 The above viz shows the shot map of the forward in the Italian Serie A this season. Dybala has added five goals to the Roma side in Serie A, averaging 3.34 shots per 90 minutes. Dybala has taken most of the shots from inside the box like a proper forward. He has taken 30 shots so far this season. Ten of the thirty shots were on target, while the rest were off target. Dybala has a shooting accuracy rate of 33.3%, and his total xG per shot is 0.12. Dybala’s goal score per 90 minutes is 0.35. 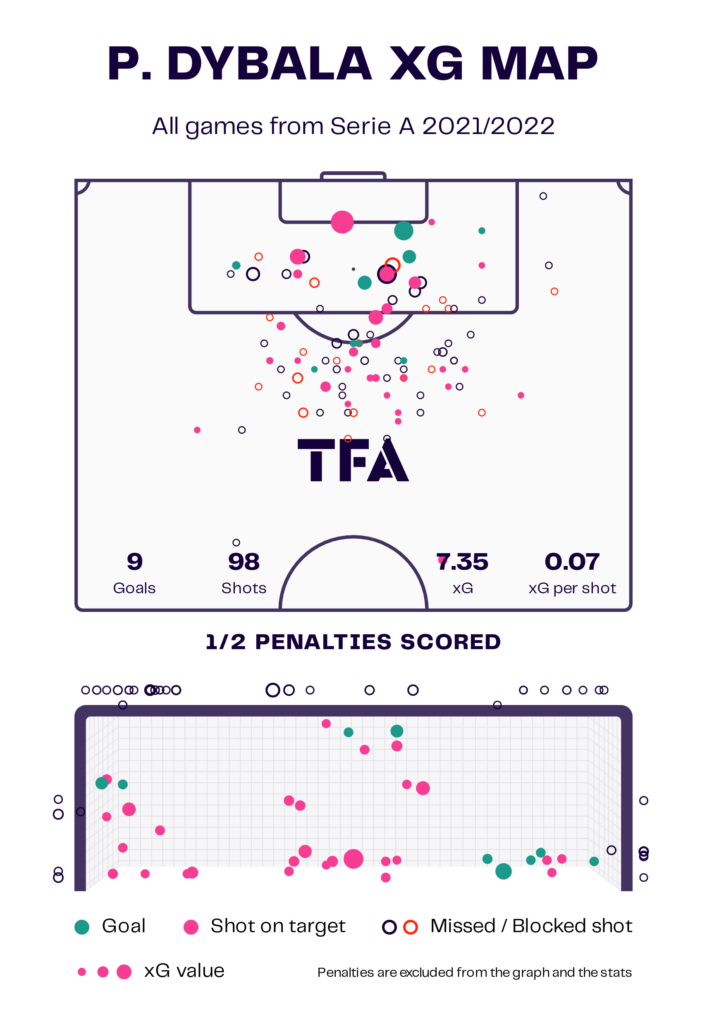 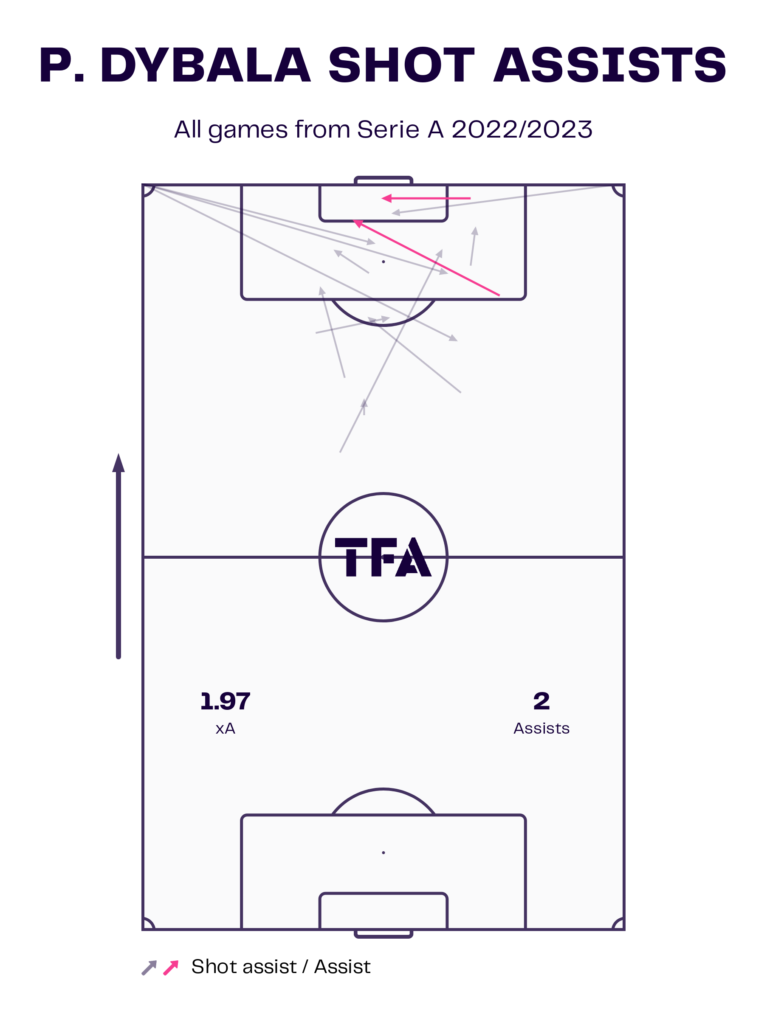 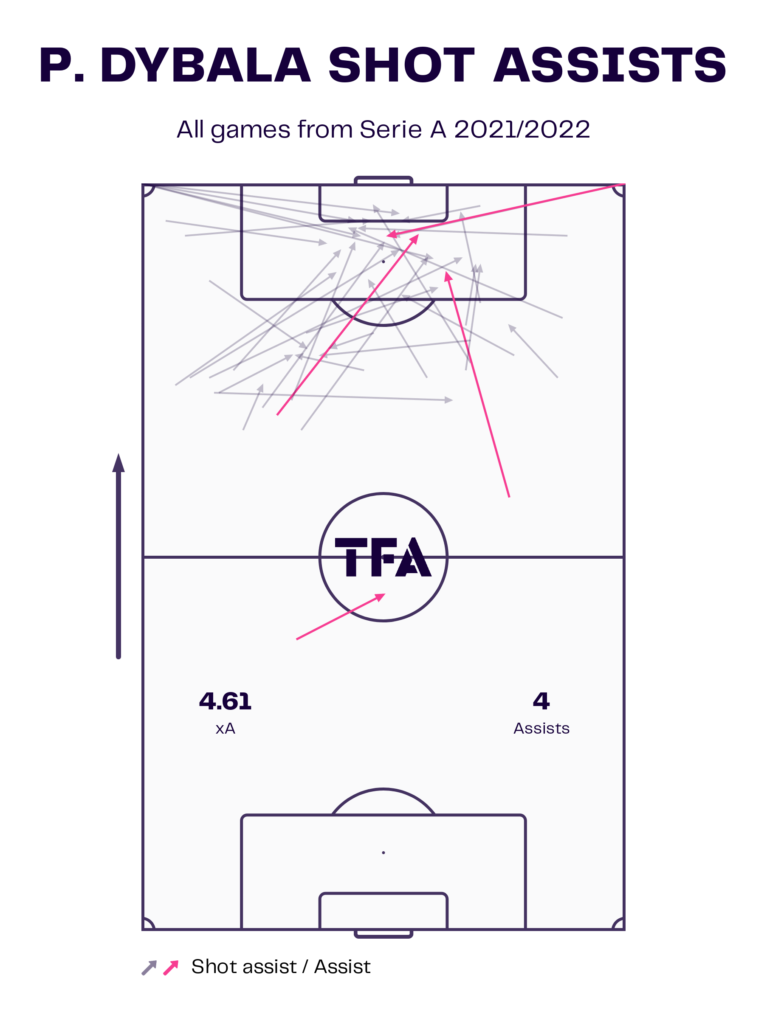 Paulo Dybala assisted five times for Juventus in the 2021-22 Serie A season. Last season, Dybala made 38 key passes and averaged 1.65 key passes per 90 minutes. Dybala passed the ball 42.82 times per 90 minutes, with an 86.1% passing accuracy rate. Dybala had an xA of 0.19 per 90 minutes. He is truly on course to break the record of five assists he provided last season in Serie A, having already provided two assists for his Roma teammates in the current season. 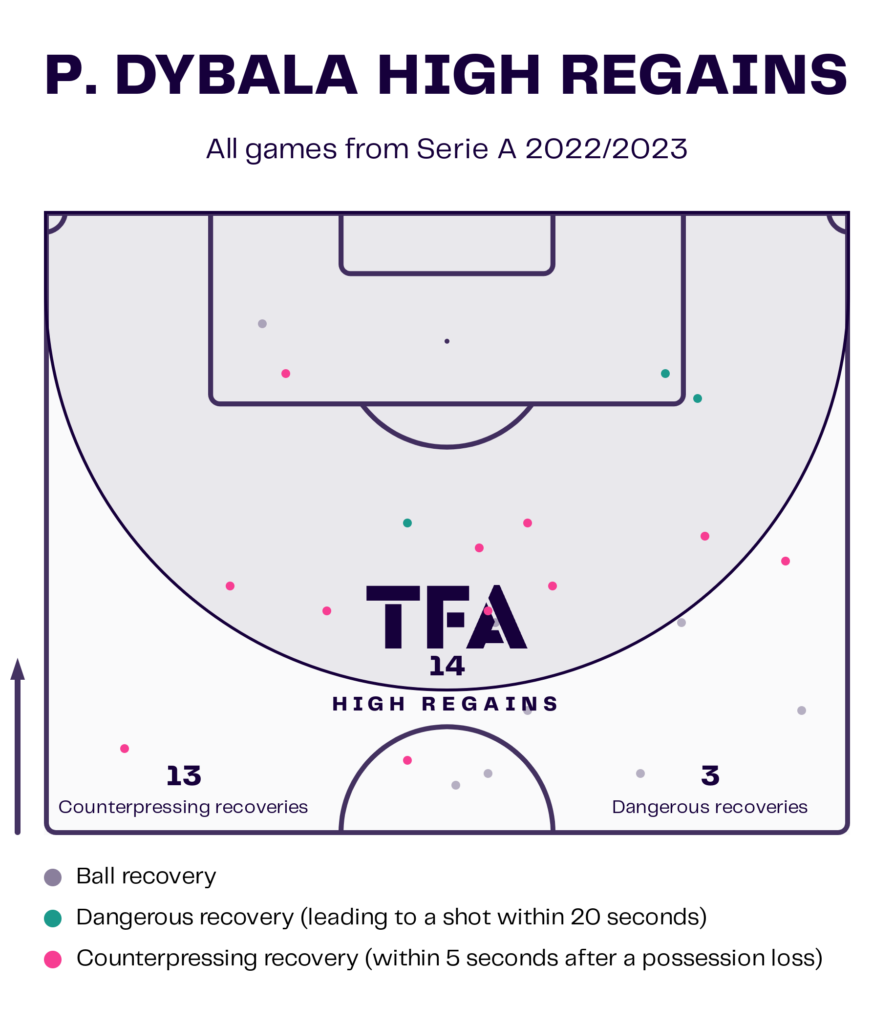 Paulo Dybala has worked hard to recover the ball for Roma in dangerous areas. This season, Dybala has managed 14 regains in the final third. Three of these 14 recoveries have been dangerous and led to a shot within the next 20 seconds of the recovery. The Argentinian forward has made 13 counter-pressing recoveries in Serie A. This season, he has attempted 86 recoveries for his Roma side.

Roma and Jose Mourinho will be delighted with the performance of their summer signing, Paulo Dybala. The Argentinian is seen as an indispensable player for the current Roma side. Dybala’s seven-goal contributions have contributed to Roma’s impressive start to the Italian Serie A season. The Argentinian forward will look to continue his form consistently, creating and scoring goals for his team and leading from the front to help Roma qualify for the Champions League next season.

The Statistics: Despite falling behind in the beginning, Inter win over...

Juventus vs Inter to be played behind closed doors due to...

Under the Microscope: Sofyan Amrabat – The Moroccan maestro of Florence