Home Analysis Player Analysis Under the microscope: How Kim Min-Jae has been a rock in the... 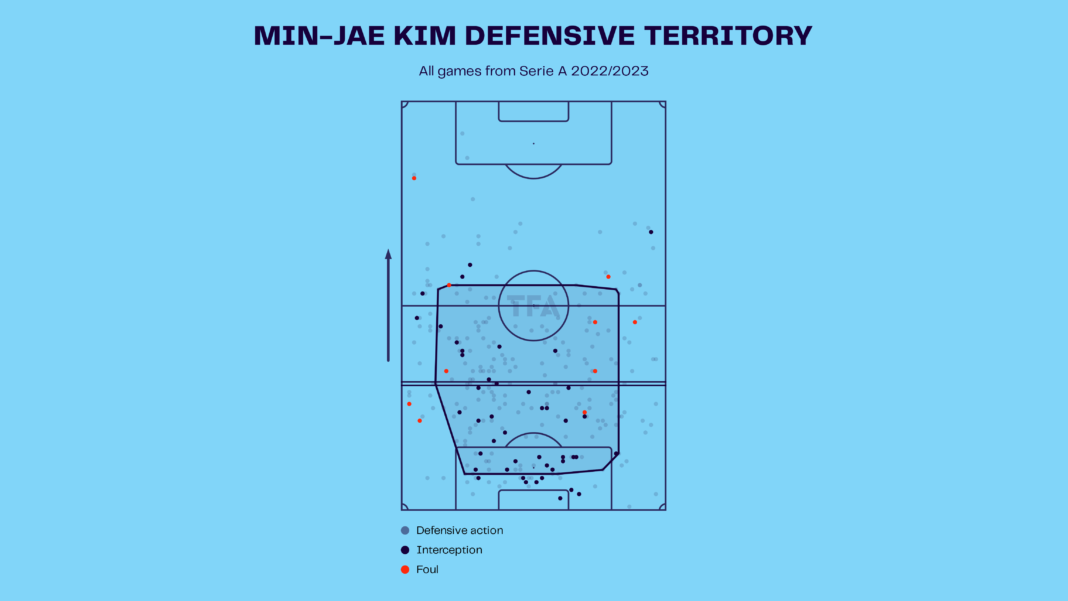 Italian football is well known for its consistency in producing some of the most exciting defenders in world football. There is a test of character and toughness that comes with being a centre-back in Serie A, with its next graduate coming in the form of Napoli’s 6’3″ South Korean rock, Kim Min-Jae.

Kim Min-Jae has risen through the ranks of world football, starting in the National League of his beloved South Korea for Gyeongju HNP. Min-Jae progressed through the Japanese and Chinese leagues before joining Turkish giants Fenerbahçe. After one impressive season in Turkey’s Süper Lig, Napoli obtained his services in the summer of 2022 for a fee of €18.1 million, and Min-Jae has continued on an upward trajectory ever since.

We will now look at some of the stats of Kim Min – Jae that show how impressive the South Korean has been in Napoli’s defensive line. 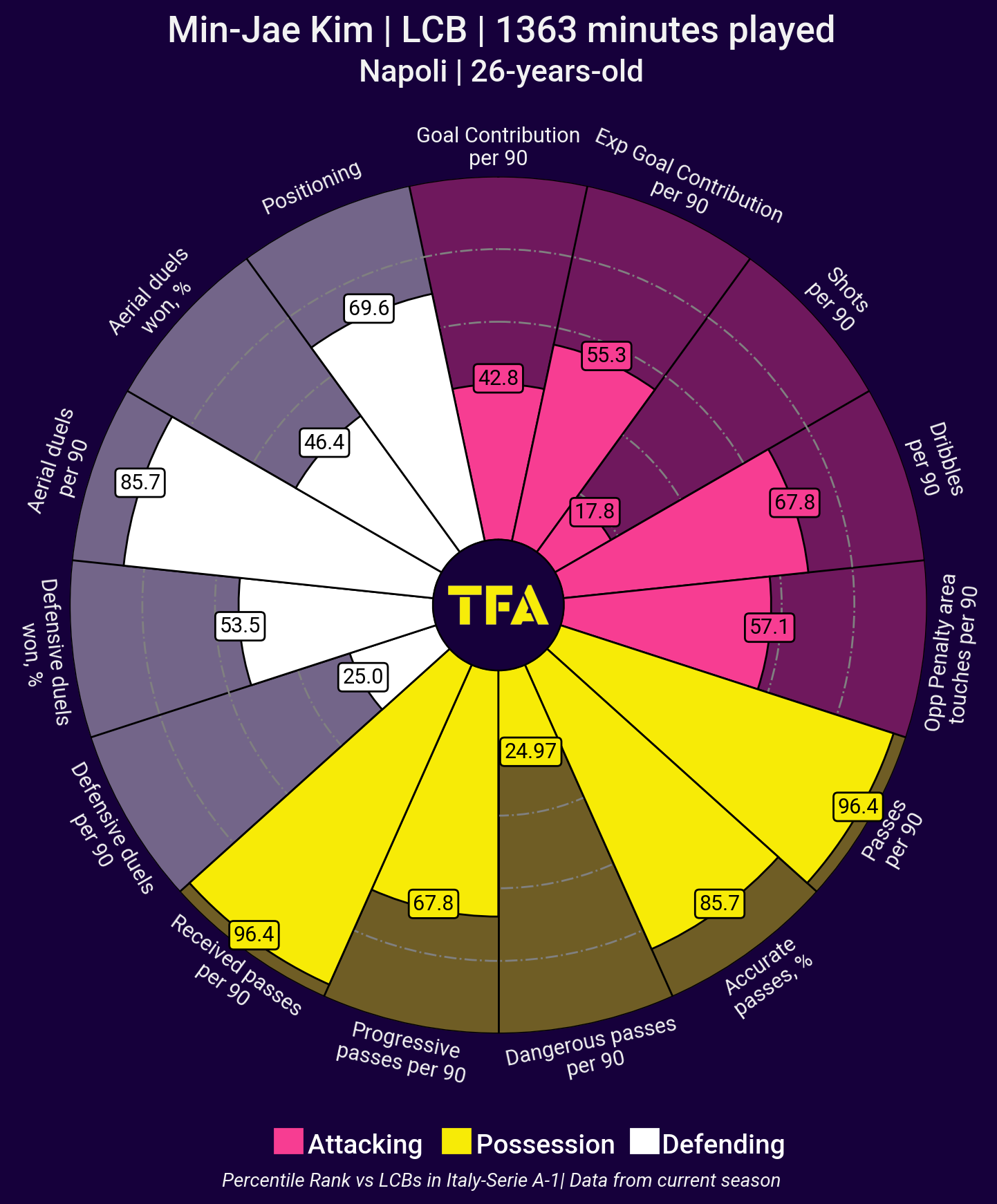 The 26-year-old has started all 14 of Napoli’s league games so far this season, scoring twice. Defensively, Min-Jae has been at the heart of a defence that has conceded only twelve goals so far.

The pizza chart above shows the overall stats of the player and the percentile rank for each quality compared with the rest of the defenders in Serie A. From this, you can see that Min-Jae ranks within the 90th percentile for his ability to find and receive a pass, but he also ranks highly in aerial duels won and his positioning.

We will look at some of these areas of Kim Min-Jae’s game further, as well as a stat from his recent performance for Napoli against 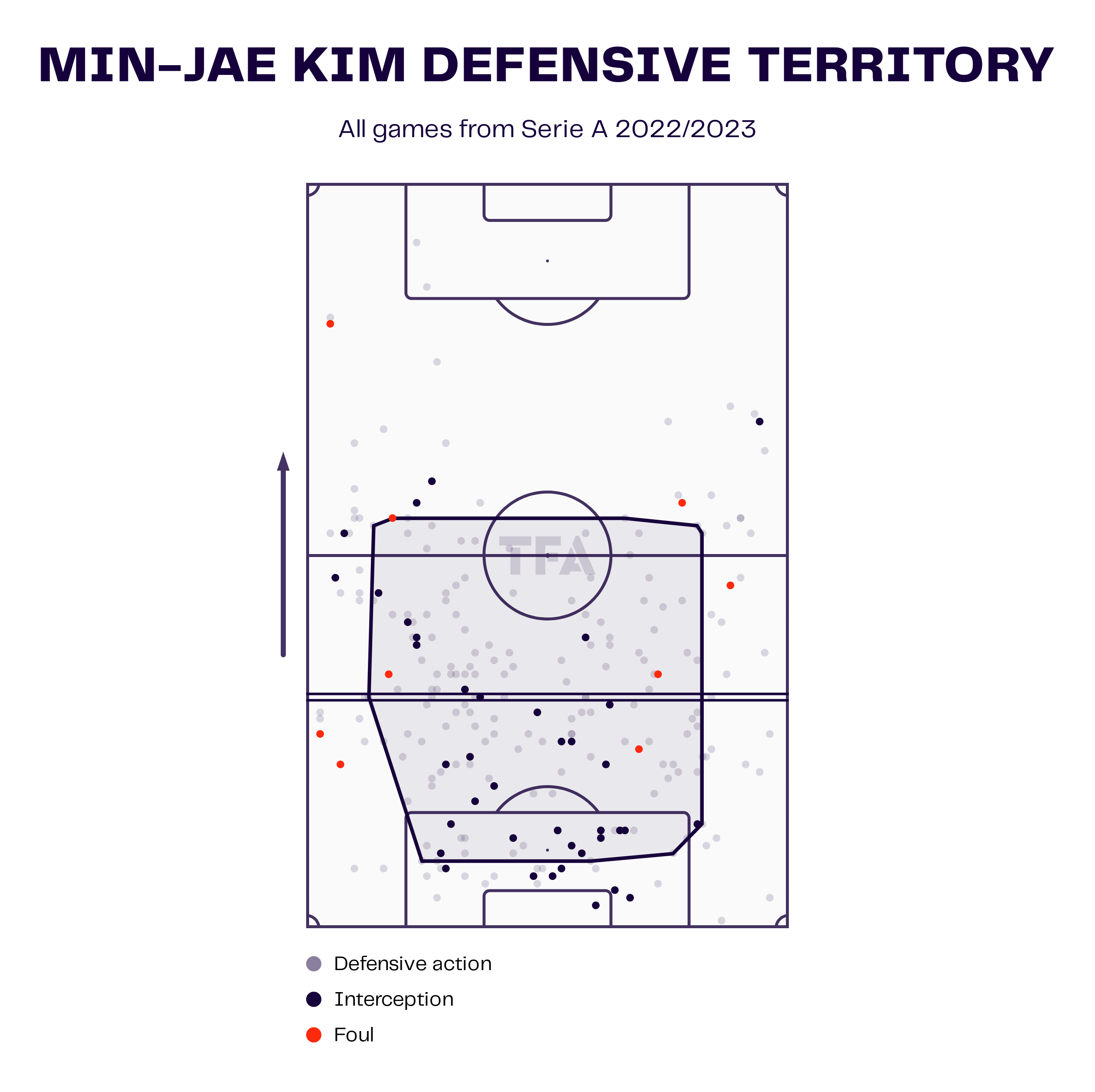 One area that is referred to when many Italian experts call Kim Min-Jae one of the best centre-backs in Serie A is his ability to defend his territory consistently and with authority. The map above shows the defensive territory that Min-Jae predominantly occupies.

From this map, it is clear to see that Min-Jae occupies the space between the final third line and the halfway line, where his awareness to sense danger high up the pitch ensures that any opposition attack results in an interception or clearance when called upon.

Playing out from the back: 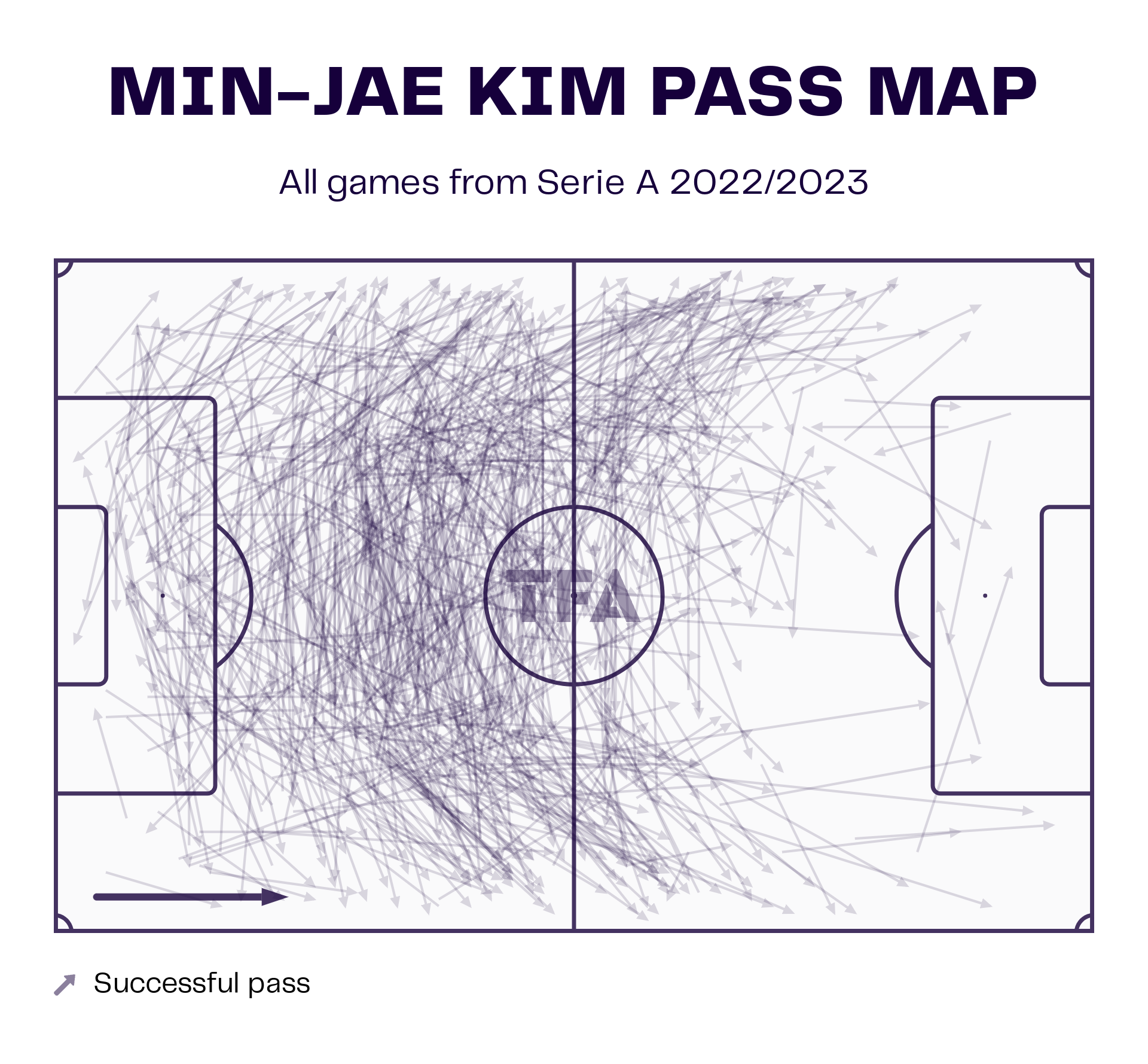 In the modern game, defenders are expected to be comfortable when carrying the ball out from the back in order to start off attacks, and this is a skill that Min-Jae possesses in abundance.

The pass map above may appear disjointed, but it does demonstrate that Min-Jae is not afraid to receive and distribute the ball, as indicated by the darker lines indicating a successful pass completed; many of them, as you can see, is forward.

Despite playing centre back, Min-Jae completes an average of 66.1 passes per game, which equates to a 90% pass accuracy total, roughly 45.6 of which are in his own half with the other 20.5 coming in the opposition half. This demonstrates that Min-Jae is not afraid to receive and distribute the ball, as well as carry it to where he can get more creative players on the ball further up the pitch into the opposing half. 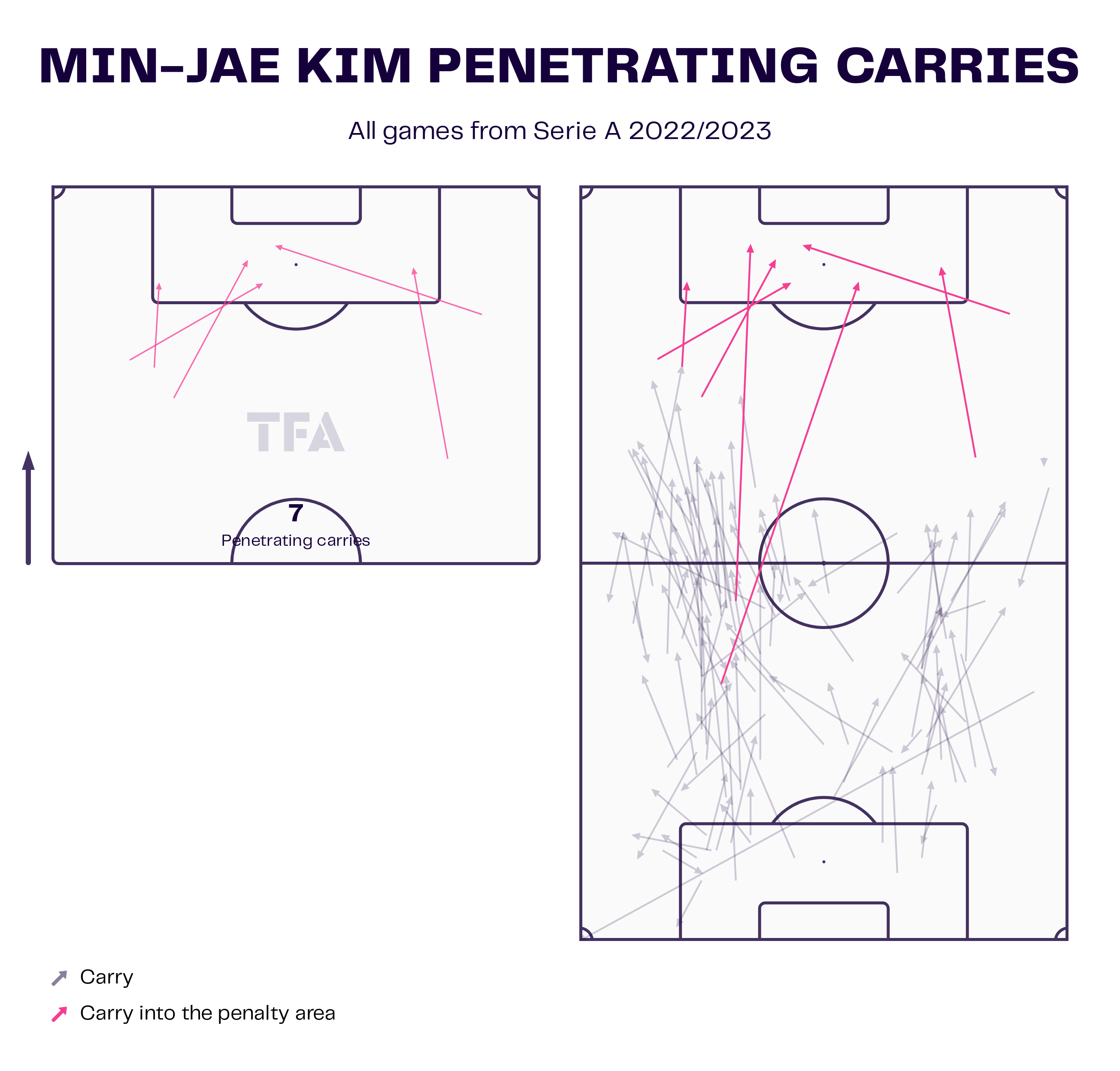 This map above supports my point as it shows any penetrating carries that a player makes, and as you can see, Min-Jae is no stranger to carrying the ball from deep in his own half into the opposition area.

Though only seven of these carries have been into the opposing penalty area, Min-Jae displays calmness on the ball and confidence within to take the ball and drive at the opposition in order to distribute it to the more creative players without them having to venture into their own half. This quality is one that has caught the attention of many within the recruitment departments at Europe’s top clubs, alongside his defensive qualities, as it is a vital component in how the modern game is played. 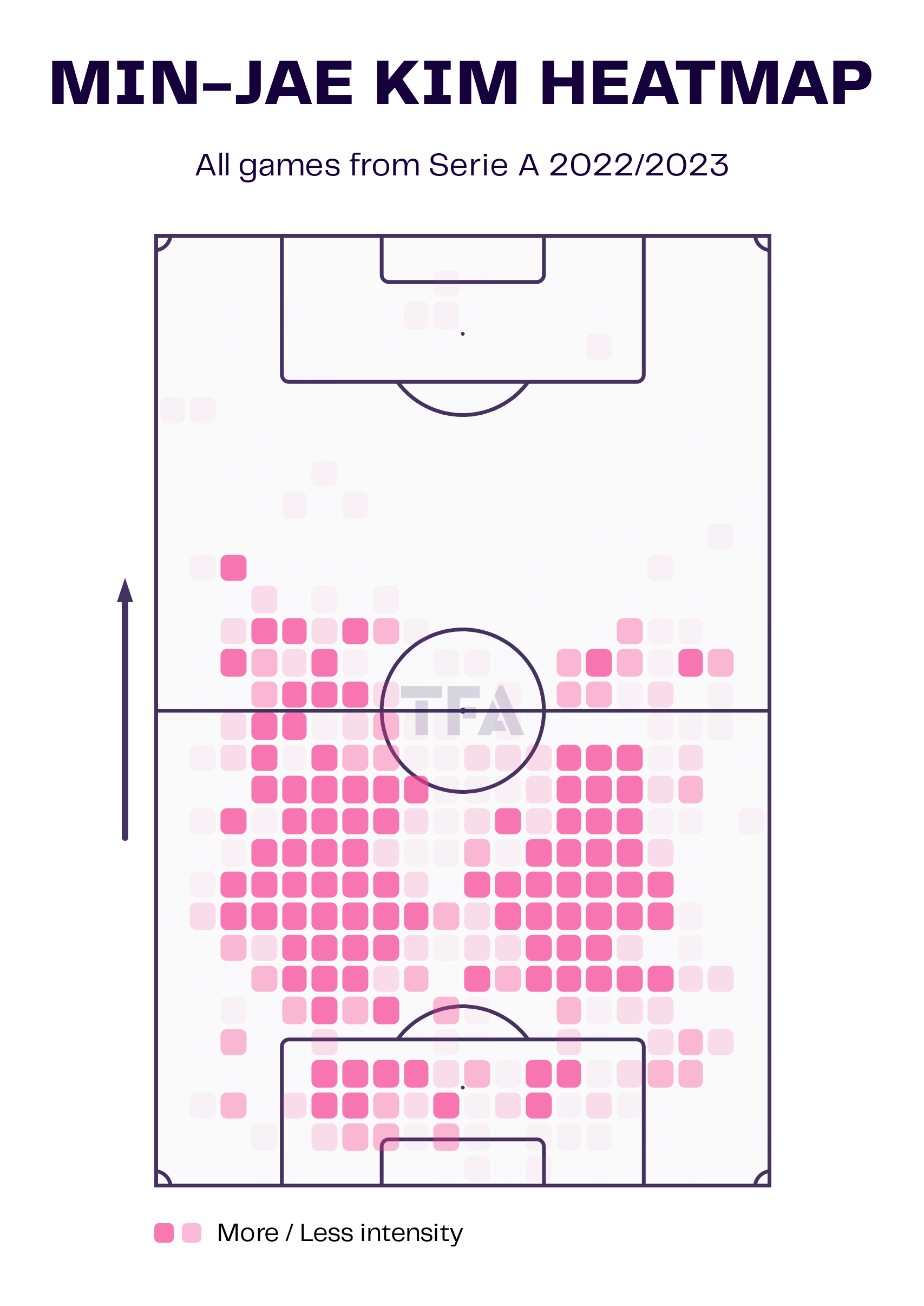 The last quality that I will mention is one that too commonly goes unnoticed, and that is positioning. Positioning is key, especially when a player is playing in defence as being out of position can result in the opposition making an attempt on goal. This quality is one that Min-Jae carries in abundance, as he knows where to be and very rarely gets caught out of position.

The heat map above shows that Min-Jae ventures out wide with less intensity, primarily to cover his full-back or assist them with a more difficult opponent. However, it is in the centre of the pitch where he feels more comfortable and acts with more intensity in order to be a wall between the opposing attackers and his team’s goal. 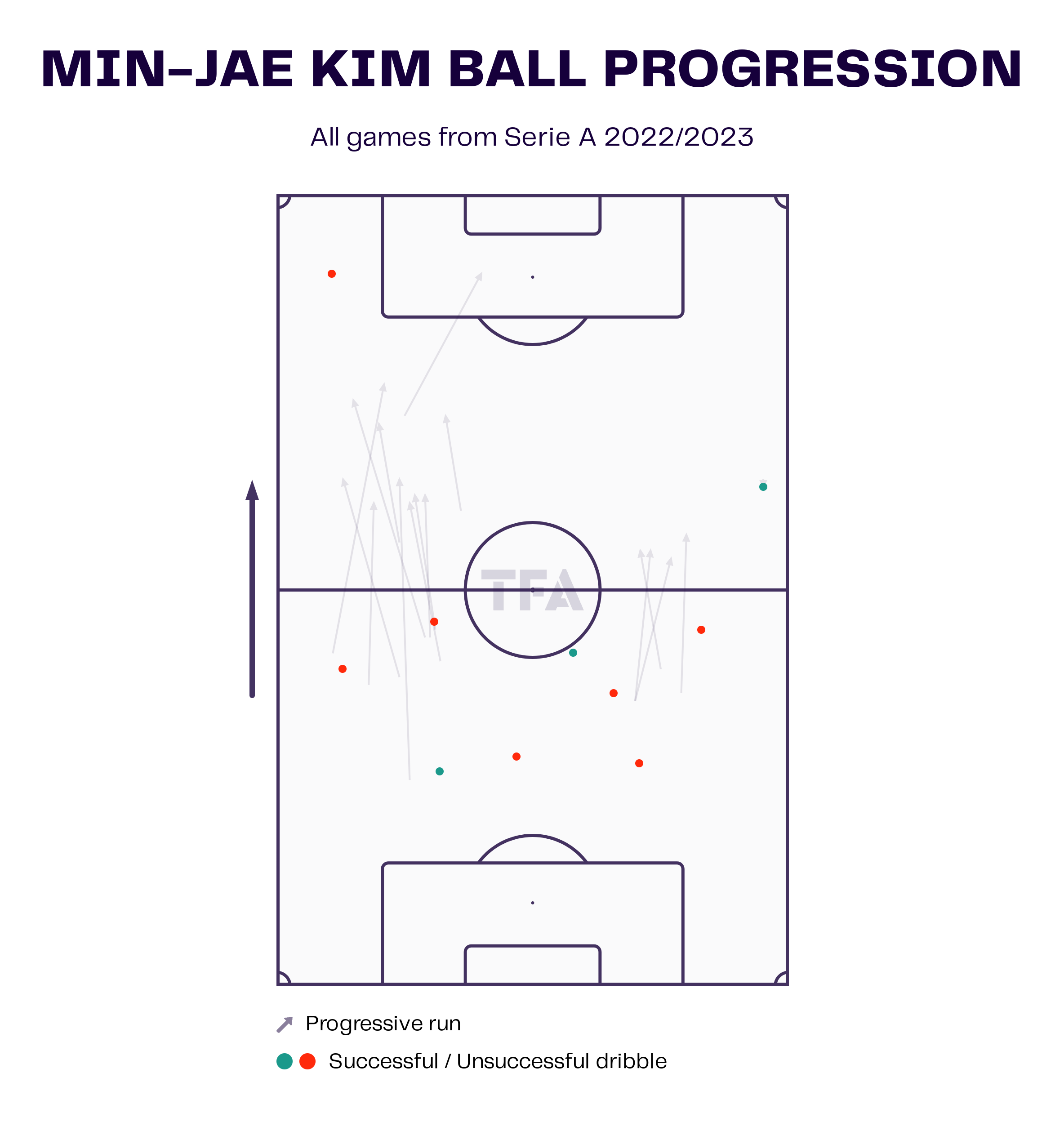 The visual above shows Min – Jae’s touch map in Napoli’s recent fixture against Inter Milan. As you can see he occupied the left side of the pitch more frequently than the usual spread across the back line we are used to seeing. This positional stance was mainly a tactical one as Inter played with wing-backs down both flanks, with Matteo Darmian the one to watch for Min – Jae and his left back, Olivera.

Inter would go on to win the game 1-0 and if this shows anything, it is that Min – Jae is not shy to help out his fellow fullback. However, this also shows that, when pulled out wider than usual, Min – Jae can be left isolated, resulting in a gap through the middle for strikers to exploit. This exploitation can be costly and in this case, Inter’s Edin Dzeko scored the only goal of the game.

Overall, it is clear to see that Min – Jae has all the talent and attributes to become one of the best defenders in Europe, if not the world, but there are still areas of his game that need solidifying to do so.

Milan should be delighted with Ibrahimović return

Under the microscope: The stats that could lead Fiorentina to a...

The Resurrection of Milan

Data Pack: Euro 2021 group A win for Switzerland against Turkey