This tactical analysis of Fiorentina’s Serbian defender was originally on our network site totalfootballanalysis.com.

Nikola Milenkovic is a name you will hear a lot about over the coming months and years as he’s being linked to European heavyweights across the continent. Milenkovic is a Serbian defender who has impressed at Fiorentina and forced his way into the Serbian national team where he caught the eye at the World Cup in Russia. This tactical analysis of the defender will tell you everything you need to know about Milenkovic and his future in European football.

Nikola Milenkovic was born in Belgrade in October 1997 and spent his entire youth career at Partizan Belgrade. After spending some time on loan at Teleoptik, Milenkovic made his debut for Partizan in the Serbian SuperLeague in the 2015/16 season. He appeared four times, largely because of a four-game suspension following a red card. He still managed to score his first goal for the club that year, however.

The following season, 2016/17, saw Milenkovic really establish himself in the team as he made 32 appearances in the league, scoring twice, as Partizan completed a league and cup double. At the end of the season, Fiorentina’s sporting director Pantaleo Corvino, famous for snapping up players cheaply in the Balkans, brought the defender to Florence. Milenkovic had a good debut season in Italy with 16 appearances in Serie A. His performances also earned him a spot in Serbia’s World Cup squad where he played all of their three games at the heart of defence. This season has seen him hit the ground running by playing every minute of Fiorentina’s opening eight games and scoring two goals. His performances has seen him linked to be the man to solve Manchester United’s defensive problems.

Milenkovic is a proper defender and combines intelligent reading of the game and positioning with strength and superb aerial ability. He’s 195 centimetres tall (6ft5in) which helps him dominate in the air. The Serbian is also quite quick and is rarely caught out due to a lack of pace. Physically, Milenkovic is complete.

Another aspect of Milenkovic’s impressive defensive game is his individual defending. He’s got a very good technique when defending on his own. The below image is one example. Milenkovic faces an opponent running at speed but he slows the opponent down before taking the ball from him. First of all Milenkovic has a great distance to the opponent which allows him to have enough space not to get beaten by a trick but he’s also close enough to step in and take the ball. His body position is excellent with him facing the attacker sideways and forcing him towards the wing. It’s difficult to see in a still image but he moves his feet quickly to minimise the risk of getting nutmegged or tricked the wrong way. 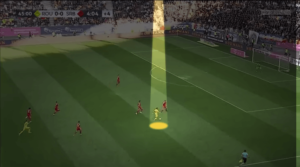 What also impresses is his intelligence as he reads the game well and positions himself intelligently. For Serbia he plays in central defence but for Fiorentina he plays at right-back in a system that sees him defend as a full-back but attack as a right-sided centre-back as they switch to a back-three in attack. This versatility has seen him develop an understanding for both positions which is sure to help him in the future.

Milenkovic’s ability with the ball is also quite impressive. He passes well and can identify runs being made by the forward players to release them with longer balls. He’s also very calm on the ball and composed even in high-pressure situations at the back.

One example of his excellent passing ability and understanding of when and how to pass the ball which is demonstrated below. Many central defenders in this scenario would choose the easy option and pass the ball wide to the full-back. Indeed, this is what every single one of Manchester United’s central defenders would do. Milenkovic is more progressive in possession, however, and plays a brilliant pass into the attacker in the half-space. This pass beats six Romanian players and gives Serbia the possibility to start a dangerous attack. 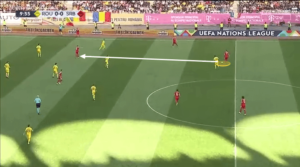 Milenkovic’s complete ability both defensively and in attack makes him such an intriguing prospect. The only area where he need to improve is his temperament. Sometimes he gets too hot-headed and loses his concentration. This may only be for short bursts, but they can prove detrimental to his team. With experience and maturity Milenkovic will improve in this regard and then he’ll be one of the absolute top defenders in the game should his development continue.

What the future holds

The comparisons with Nemanja Vidic are predictable given his position and nationality, but in fact, they have some grounding too. Milenkovic is just as defensively excellent as Vidic was, perhaps a bit less physical but maybe better at reading the game. He is many levels above Vidic in terms of his technical ability and composure on the ball. What Vidic had that few do though is a mentality of a serial winner. If Milenkovic has just three-quarters of that mentality then he will be a defensive superstar over the next decade. Mentality is often what separates players, and for all his ability, Milenkovic will need to mature, calm down and gain more experience to really be placed among the likes of Vidic. The future looks extremely bright though.

Links to clubs like Manchester United are to be expected as Milenkovic could probably play in every league due to his ability both with and without the ball. The Serbian defender has everything needed to succeed at the highest level of European football. It would be a huge surprise, given his ability, to not see him lead the defence of one of Europe’s biggest clubs. For now, though, Fiorentina is the perfect club for him to develop at.

24y/o Serie A star could be the key for Manchester City...