This player analysis was first featured on our dedicated analysis site, totalfootballanalysis.com

Comparisons between players are often lazy and doesn’t offer much. Sure, there might be a resemblance in either the style of play or simply the appearance. We have heard many times of the new Maradona, the new Messi or the new Andrea Pirlo. This time, with Brescia playmaker Sandro Tonali, the links to Pirlo are easy yet accurate. This tactical analysis will profile the 18-year-old midfielder Sandro Tonali who looks destined for greatness.

Tonali is an 18-year-old midfielder who joined Brescia as a youngster from Piacenza. After progressing through the youth teams Tonali made his Serie B debut for Brescia in August 2017. He went on to make 19 Serie B appearances in his debut season. This season, after turning 18 in May, Tonali has become a key man for Brescia and was remarkably picked for the Italian senior team for this international break. Italy coach Roberto Mancini said upon the announcement that he was “curious to see Tonali” and that the midfielder was “incredibly gifted”. That’s high praise indeed for the young playmaker.

What makes the Pirlo comparison so appealing is the fact that both players started their senior careers at Brescia, they both have that elegant style of play, a glorious range of passing and that intelligence to read the game ahead of all the others. Add the fact Tonali also has long hair and also possess mental rather than physical pace just like Pirlo. The comparisons are natural but Tonali have a long way to go to reach even half the heights Pirlo did.

Brescia play in a 4-3-1-2 formation and Tonali, just like Pirlo at Milan, line up as the defensive midfielder at the base of the midfield diamond. From this position he initiates the attacking play as well as fulfill a vital role defensively with him covering the space in front of the center-backs. You can see his position in the formation below. 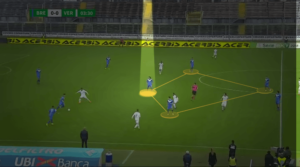 What instantly caught my eye when watching Tonali was his understanding of space and where to position himself. Many midfielders in similar roles like the one he’s playing often drop in front of the opponent’s strikers to get on the ball. Often this is done simply because they’re not comfortable with players around them. This dropping movement if often meaningless as it doesn’t destabilize the opposition’s defensive structure (unless, of course, teams have a plan and make suitable rotations in other areas).

Tonali, however, looks to position himself behind the first line of pressure. This asks a question of the opposition as he attracts the attention of both the forwards and the midfielders when he’s positioned between their defensive lines. It also allows his teammates in midfield to push higher while still retaining good passing connections with Tonali. Furthermore, it means when his defenders finds him with a pass they’ve often broken one of the opponents defensive lines. It’s just very clever positioning. You can see an example below. 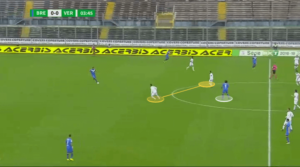 From this deep position, Tonali uses his superb passing ability to dictate the tempo of Brescia’s play. His passing range is complete and he’s equally good in tight areas as he is with longer, sweeping passes. The image below highlight one scene when he plays a teammate through on goal from the base of midfield. 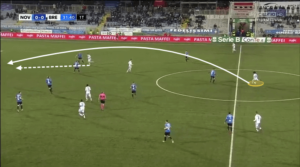 Tonali’s very creative and finds solutions to unlock opponents with clever passes. The below assist is a good example as he spots his onrushing midfield teammate and plays him through rather than look for the striker higher up in the image. It’s an unexpected pass and turns out to be devastating. 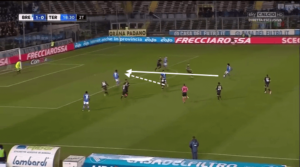 Tonali’s split vision really sets him apart from other young midfielders and his technical ability is so good it makes him comfortable with both feet. Therefore it’s no surprise to see him come up with brilliant passes with his left-foot like the one in the image below when Tonali spots a teammate at the back post and chips the ball over with his “weaker” foot. 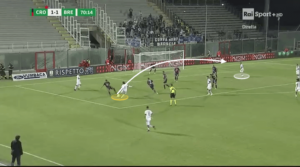 Another key asset in Tonali’s game is his dribbling ability. This is a skill Pirlo had which was rarely discussed. The Italian legend was a master of getting out of tight situations with quick feet and marvellous technique. Just like Pirlo, Tonali’s dribbling isn’t based on step-overs or other youtube-worthy skills. Instead, we’re talking about body feints, dropping the shoulder, feigned passes or similar little movements to get away from an opponent. The below image shows Tonali getting pressed in midfield. He receives the ball and immediately takes a few quick steps to dribble into the empty space in midfield to get away from his marker. This skill is vital in allowing Tonali to resist high-pressured situations and still remain calm with the ball. 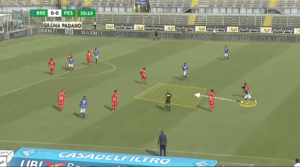 Apart from his outstanding abilities in attack, Tonali’s also very good defensively. He reads the game superbly and uses his understanding of the game to win the ball back through interceptions and sometimes through clever tackles. The below image is a perfect example. Tonali instantly reads the pass inside from the right-back towards a midfielder. As the ball travels he steps in tight, wins the ball and sets Brescia off on a counter-attack. 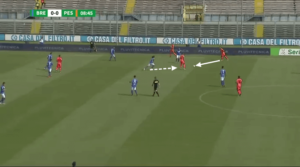 The similarities with Pirlo are striking. The brilliance in possession, the vision, the technique and the reading of the game are all Pirlo-esque qualities. Add a good shot with both feet and you get why Mancini was raving about Tonali.

The future after Brescia

Tonali has predictably been linked to every big club imaginable already. Chelsea, Juventus, Inter, Milan and Napoli have all be mentioned. Tonali himself has reportedly said he’d like to stay in Italy which means a move to a big Serie A club looks the most likely. Given he’s never played in the top flight it would be arrogant to believe he could instantly move to one of the top clubs and play. But a move to any of the big clubs and a loan move for a season to a club like Sampdoria or Empoli (two clubs who play attacking possession football) would be a perfect next step. Tonali is still only 18 and needs to mature and that solution would be superb for the talent.

Sandro Tonali is an extremely gifted young midfielder and the comparisons with Andrea Pirlo are both understandable and accurate. His appearance and his style of play are both reminiscent of the Italian genius and Tonali’s future looks extremely bright. Make sure you keep an eye on Italy’s next big thing.

If you love tactical analysis, then you’ll love the new magazine from totalfootballanalysis.com – 118 pages of pure tactical analysis covering topics from the Premier League, Serie A, La Liga, Bundesliga and many, many more. Get your copy today for just £4.99 here!

The best players and manager to have never won the Champions...

Diamond in the rough: River Plate midfielder is just what Inter...