Home Analysis Under the microscope: How the Argentine midfielder has played a key role... 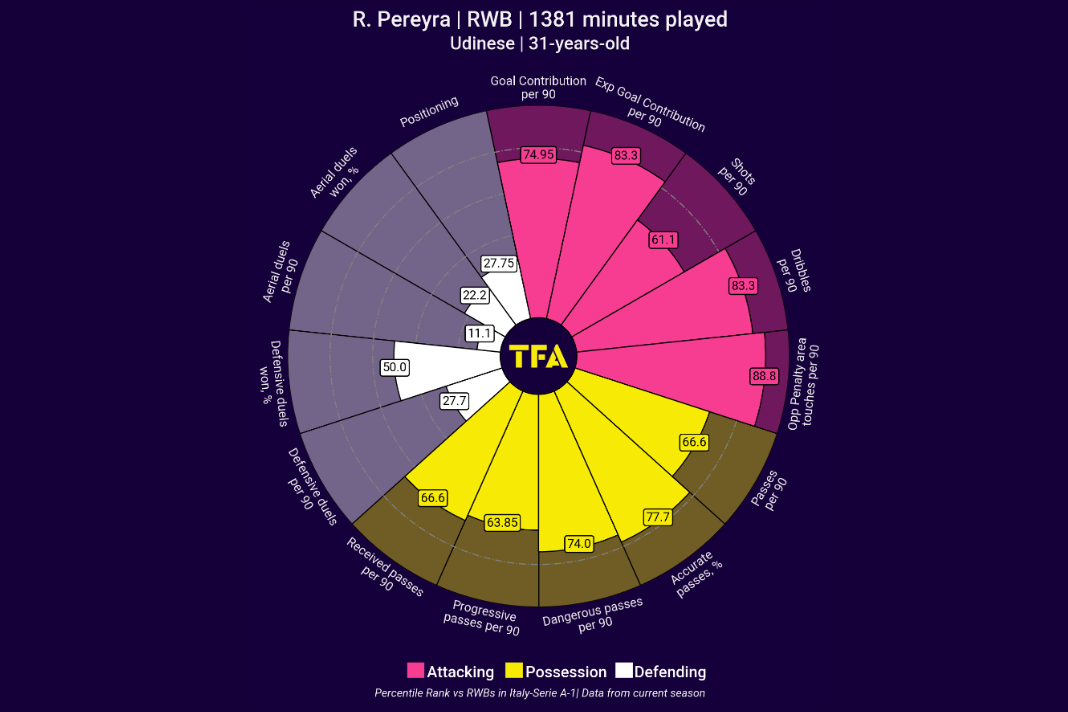 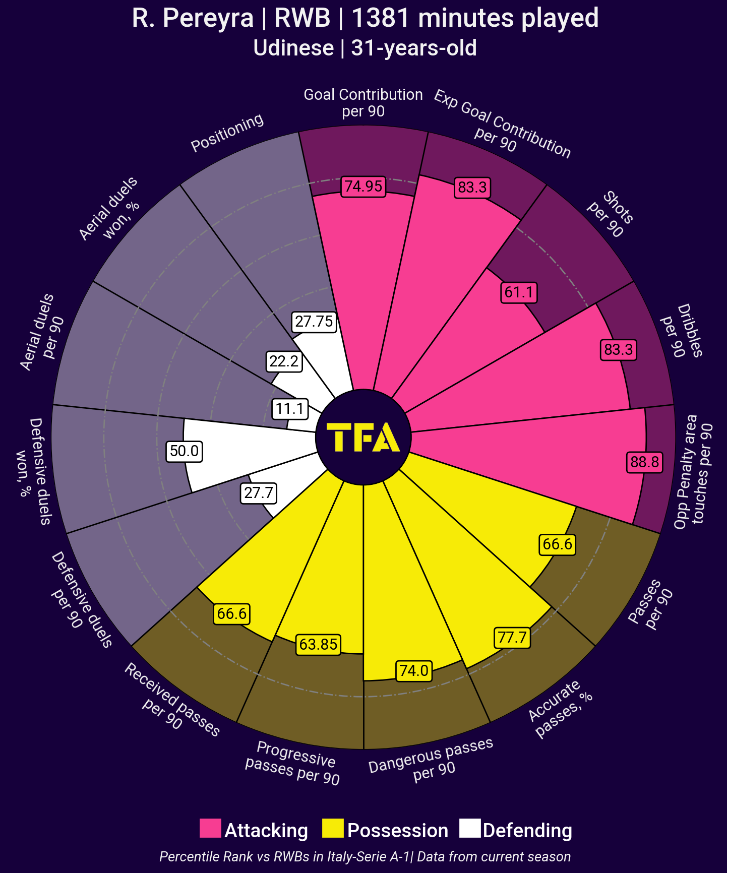 The 31-year-old Argentinian midfielder Roberto Pereyra has scored one crucial goal and provided five important assists for the Udinese side in the current season of Serie A. The above viz shows the stats of the player in comparison to the other players featured as right-wingbacks in Serie A this season. It can be observed that Pereyra dominates the majority of the Serie A right wingbacks in most of the attacking and possession stats. Pereyra ranks highly in the opponent’s penalty area in touches per 90 stats. Pereyra has also performed well in the following statistics: expected goal contributions per 90, dangerous passes per 90, dribbles per 90, and accurate passes%. Pereyra likes to provide creativity to the Udinese side from the wings; he has created the second-most chances for the Udinese side in the current Serie A season. He has also attempted 39 dribbles, the seventh-highest total in Serie A this season. 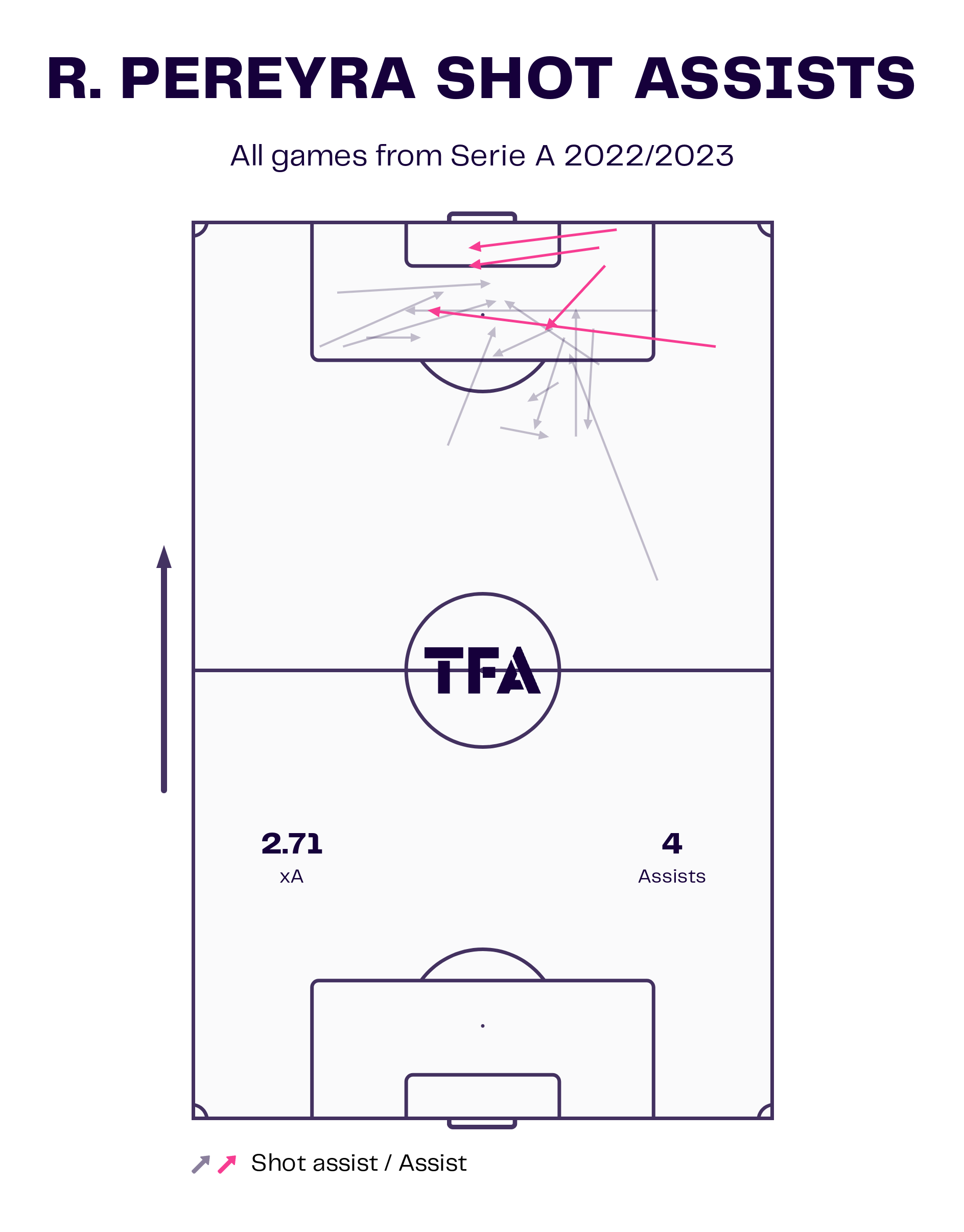 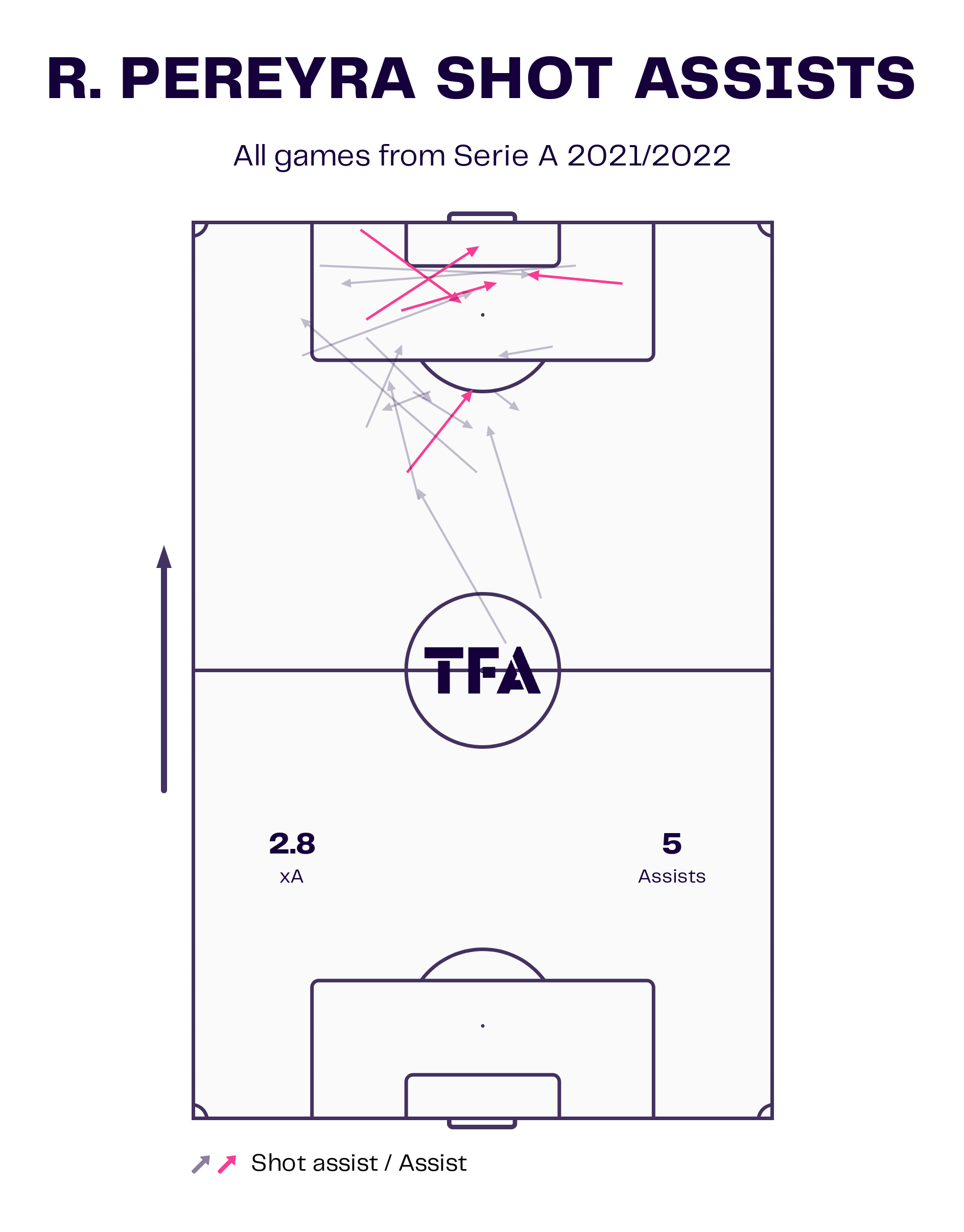 Pereyra has improved his playmaking skills in the current season, as can be seen by his stats regarding key passes and the fact that he has already equalled his assist tally from the last season. 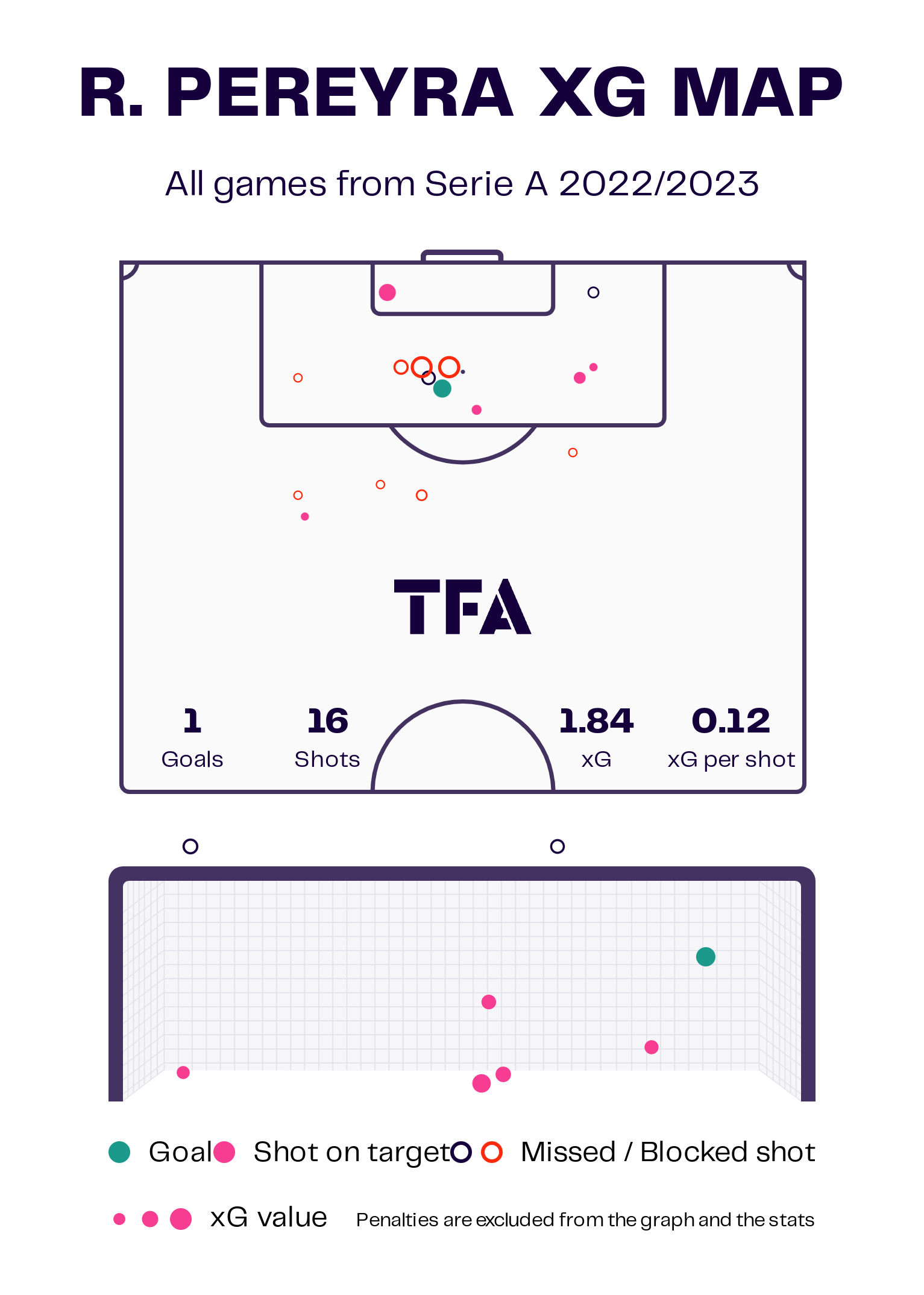 The 31-year-old, experienced Argentinian midfielder Roberto Pereyra has netted just one of his 16 attempts this season. Most of his shot attempts have come from outside the penalty box. Most of the shots have been off-target, and Pereyra will look for some improvement in the scoring department. Pereyra’s goal scored per 90 minutes is 0.13, and his goal involvement per 90 minutes is 0.42. His shooting accuracy is 42.3%, and his total xG per shot is 0.12. 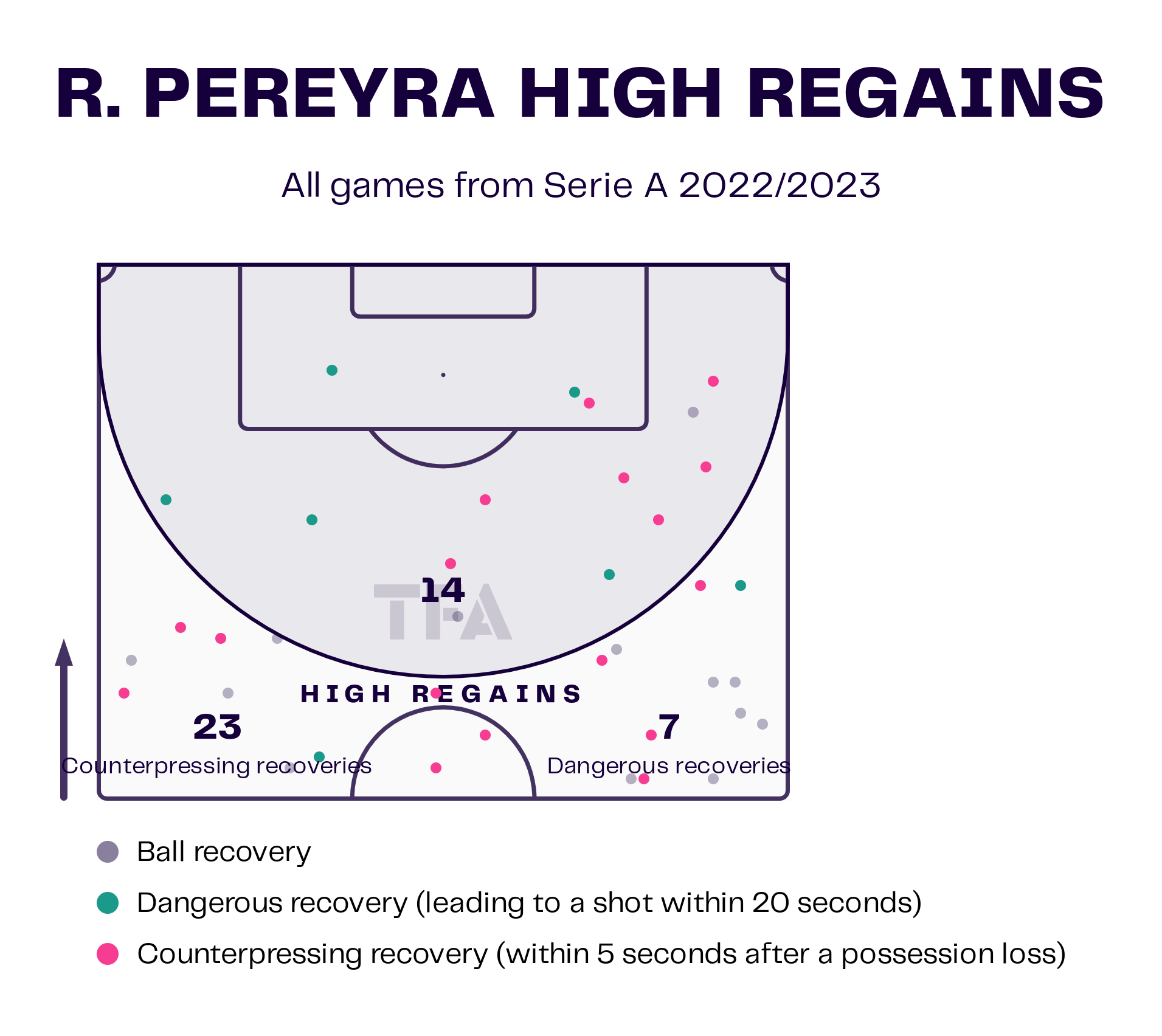 Roberto Pereyra has worked hard to recover the ball for Udinese in dangerous areas. This season, Pereyra has managed 14 regains in the final third. Seven of these 14 recoveries have been dangerous and led to a shot within the next 20 seconds of the recovery. The Argentinian midfielder has made 23 counter-pressing recoveries in Serie A. He has attempted a total of 91 recoveries from the Udinese midfield this season.

Udinese will be happy with the performance of 31-year-old, experienced Argentinian midfielder Roberto Pereyra this season. Pereyra has been an integral part of this Udinese side. His six goal-scoring contributions and playmaking skills in the midfield have helped Udinese make a great start in the 2022–23 Italian Serie A season. The Argentinian will look to continue this form post-international break, create goals for his team, and dominate games from the midfield.

Under the microscope: How the Senegalese striker is leading Salernitana to...