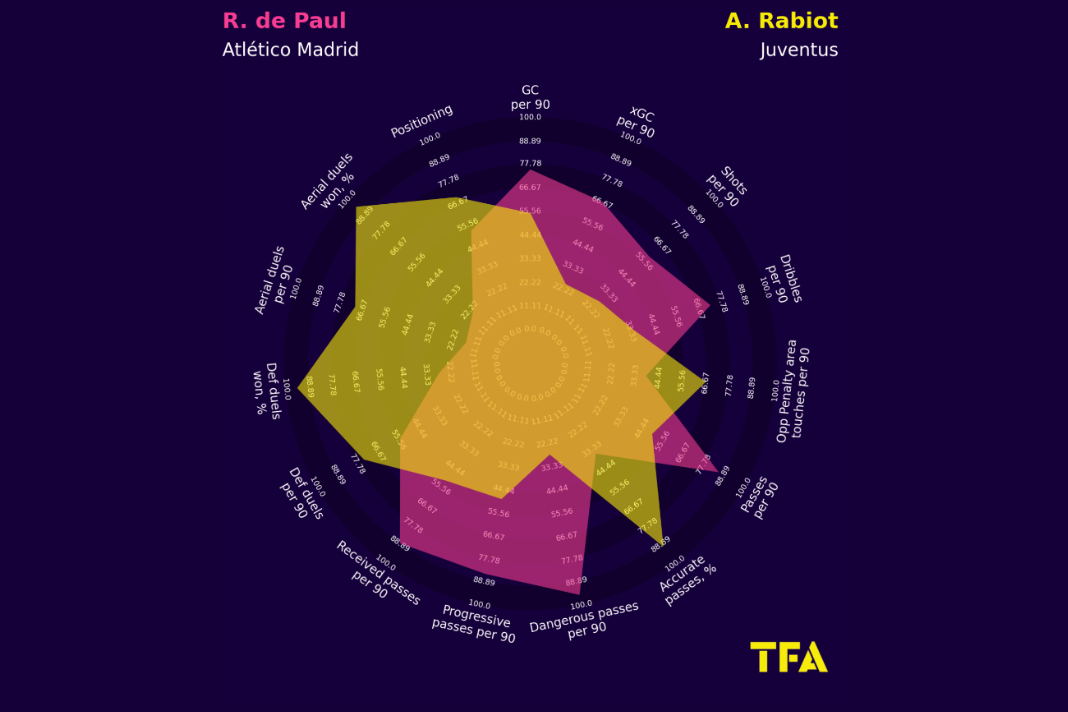 One player who has been a significant performer for Atletico Madrid in La Liga is 28-year-old Argentinian midfielder, Rodrigo De Paul. The midfielder has performed well and impressed the scouts of various big European clubs with his performance in La Liga and the 2022 Qatar World Cup this season. He started all seven games as a right-central midfielder for the Argentina team, which won the 2022 Qatar World Cup. During the Qatar World Cup, De Paul showed off a lot of his talent with his possession, passing, and defensive qualities. The Argentinian midfielder has been linked with a move to Inter Milan, Juventus, Roma, and Milan ahead of the winter transfer window. The 28-year-old midfielder has experience of playing in Serie A, having played for five seasons with the Udinese side. Serie A side Juventus will look to sign the midfielder, and here are some stats that show why the Italian giants are looking to sign him. 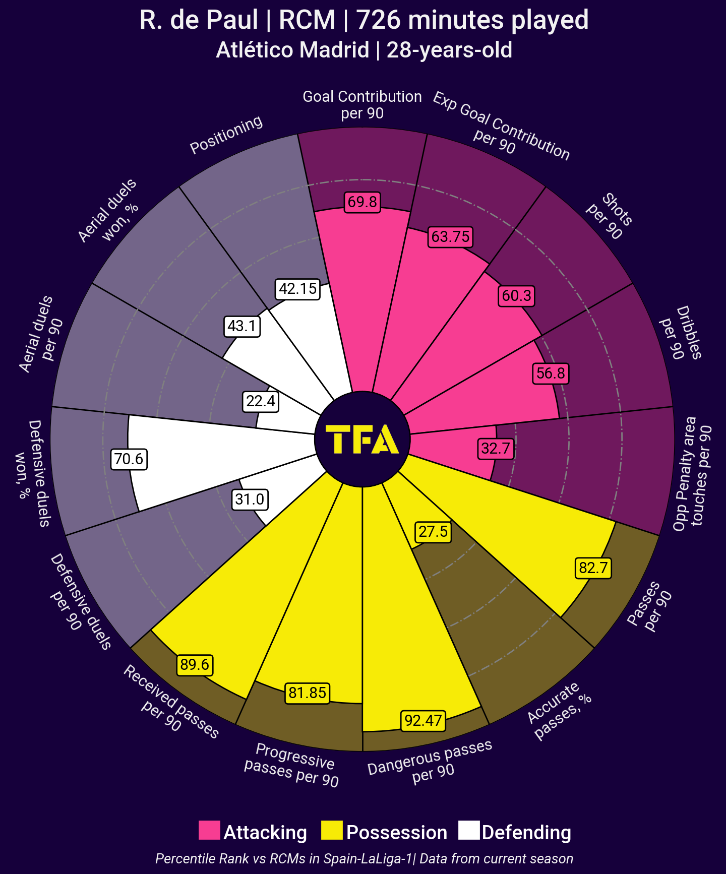 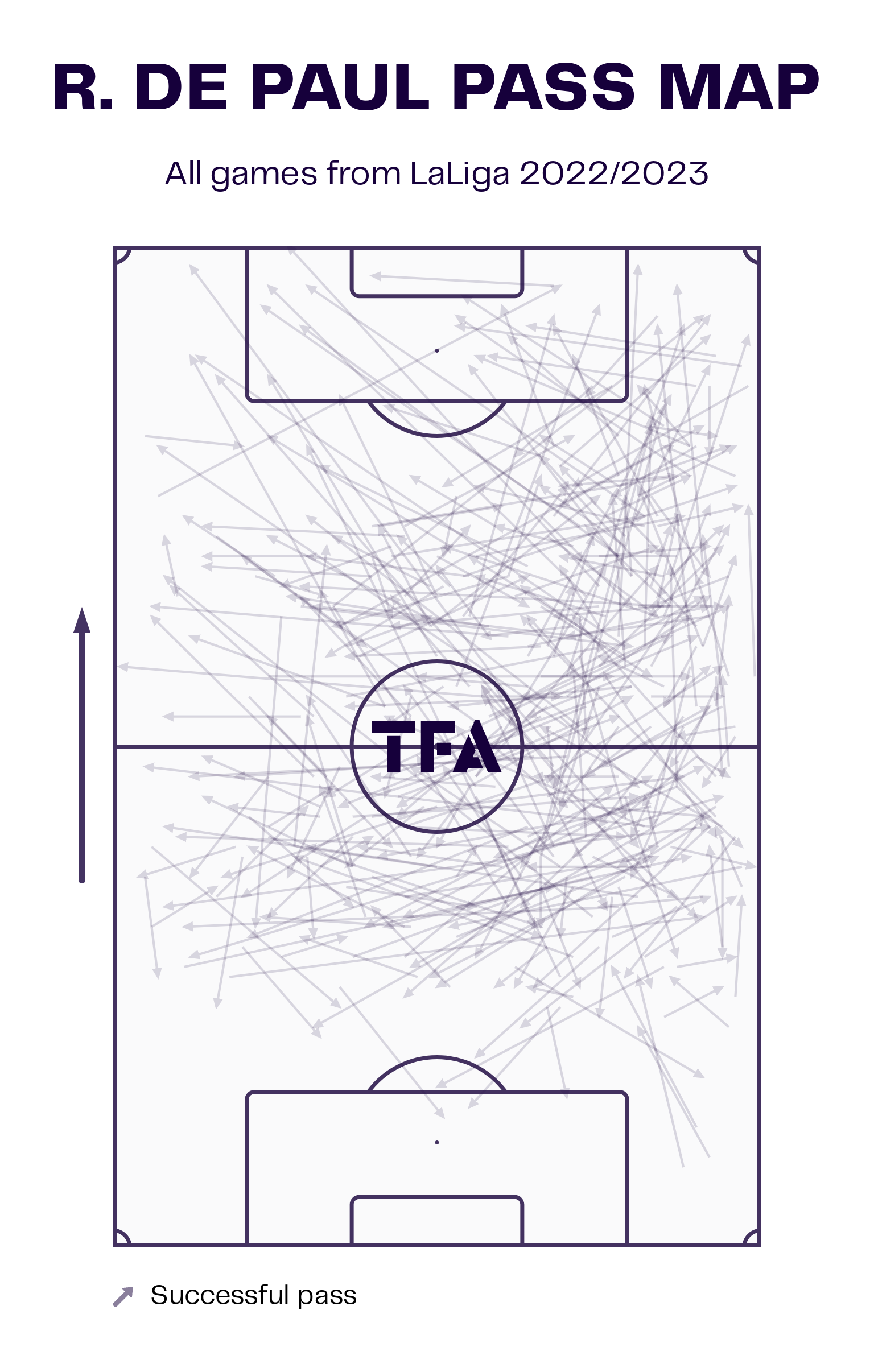 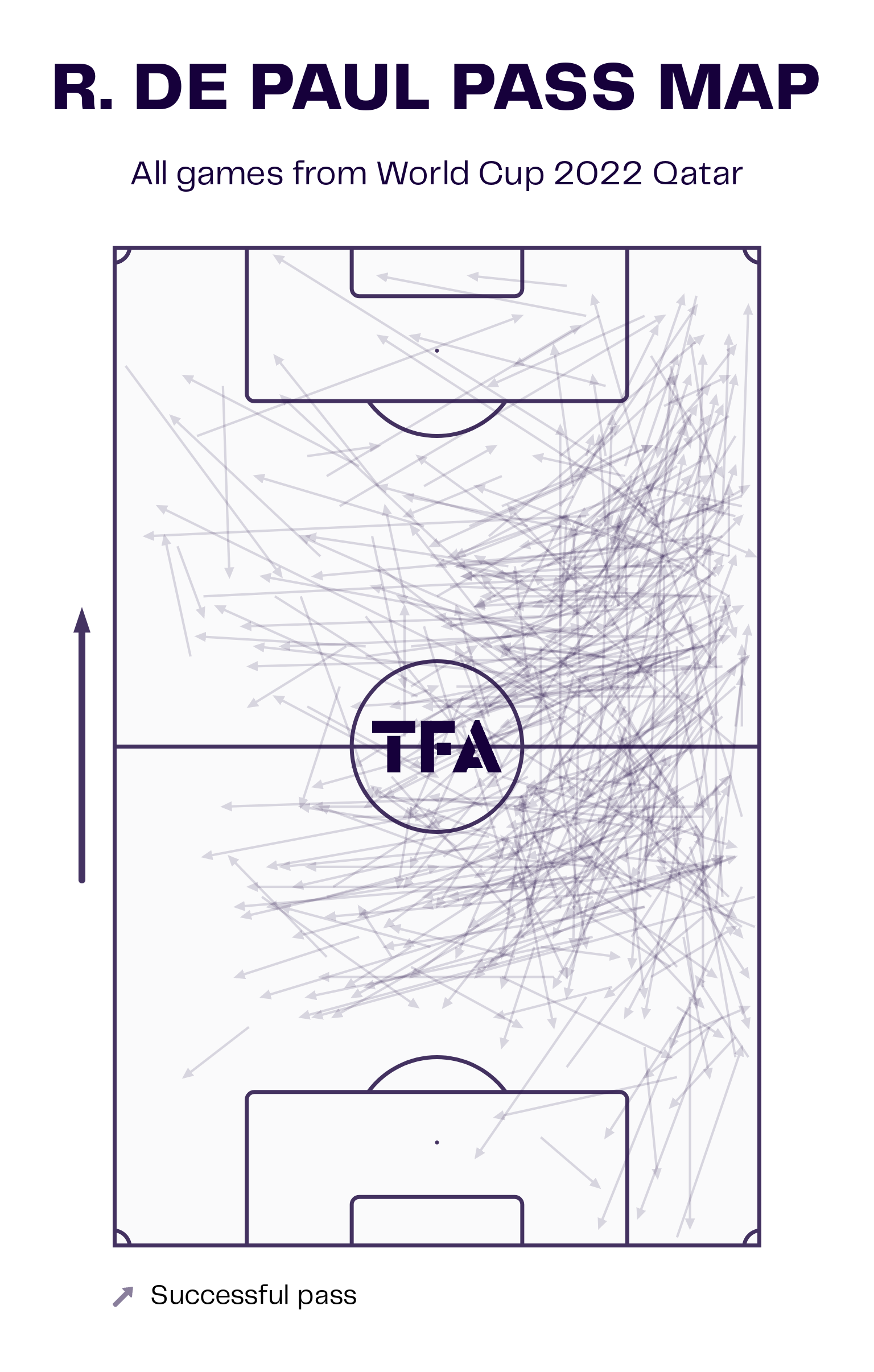 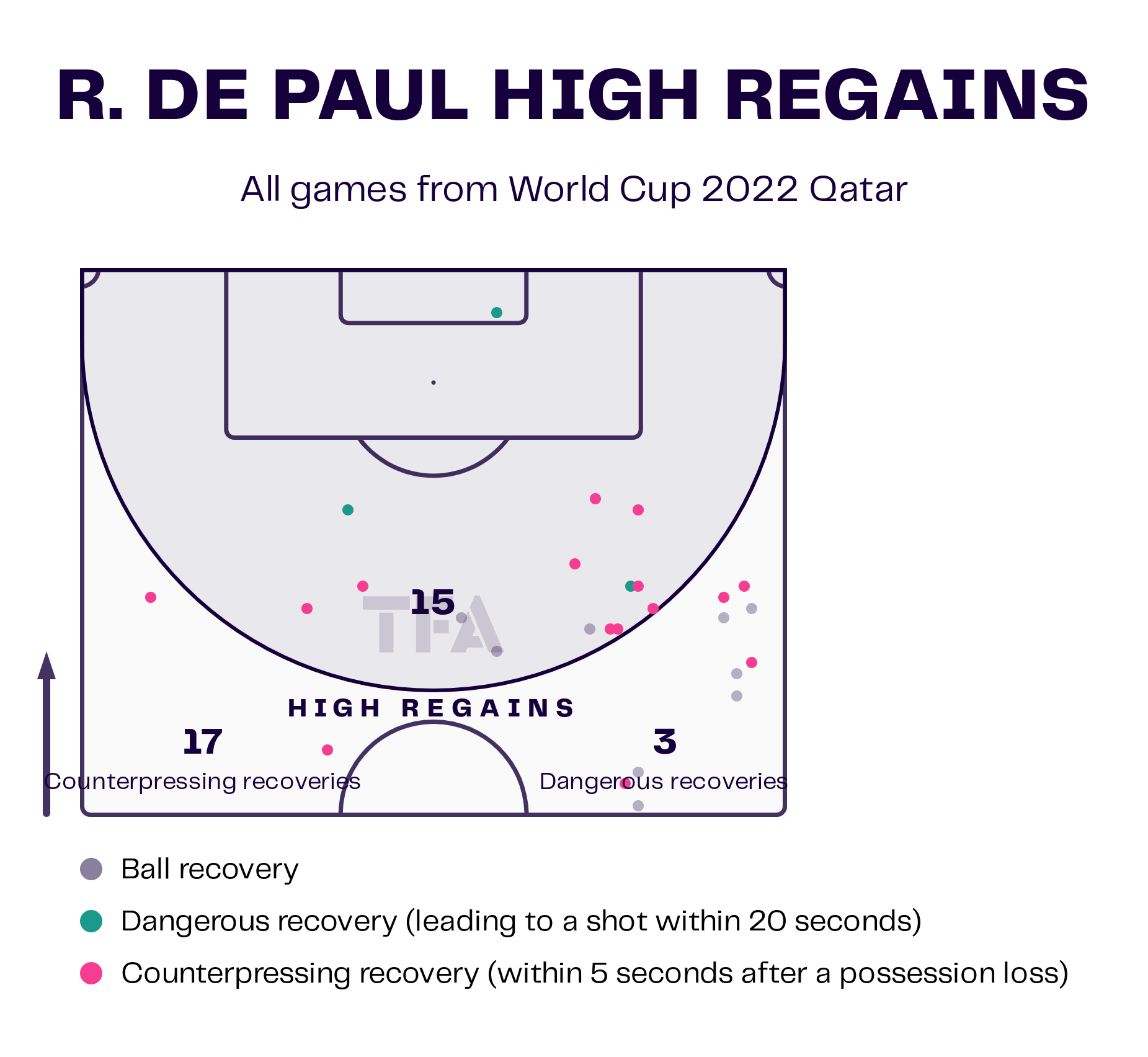 Rodrigo De Paul worked hard to recover the ball for Argentina in dangerous areas. During the World Cup, De Paul managed 15 regains in the final third. Three of these 15 recoveries have been dangerous and led to a shooting within the next 20 seconds of the recovery. The Argentinian midfielder made 17 counter-pressing recoveries in the 2022 Qatar World Cup. During the World Cup, he attempted 62 recoveries from Argentina’s midfield. 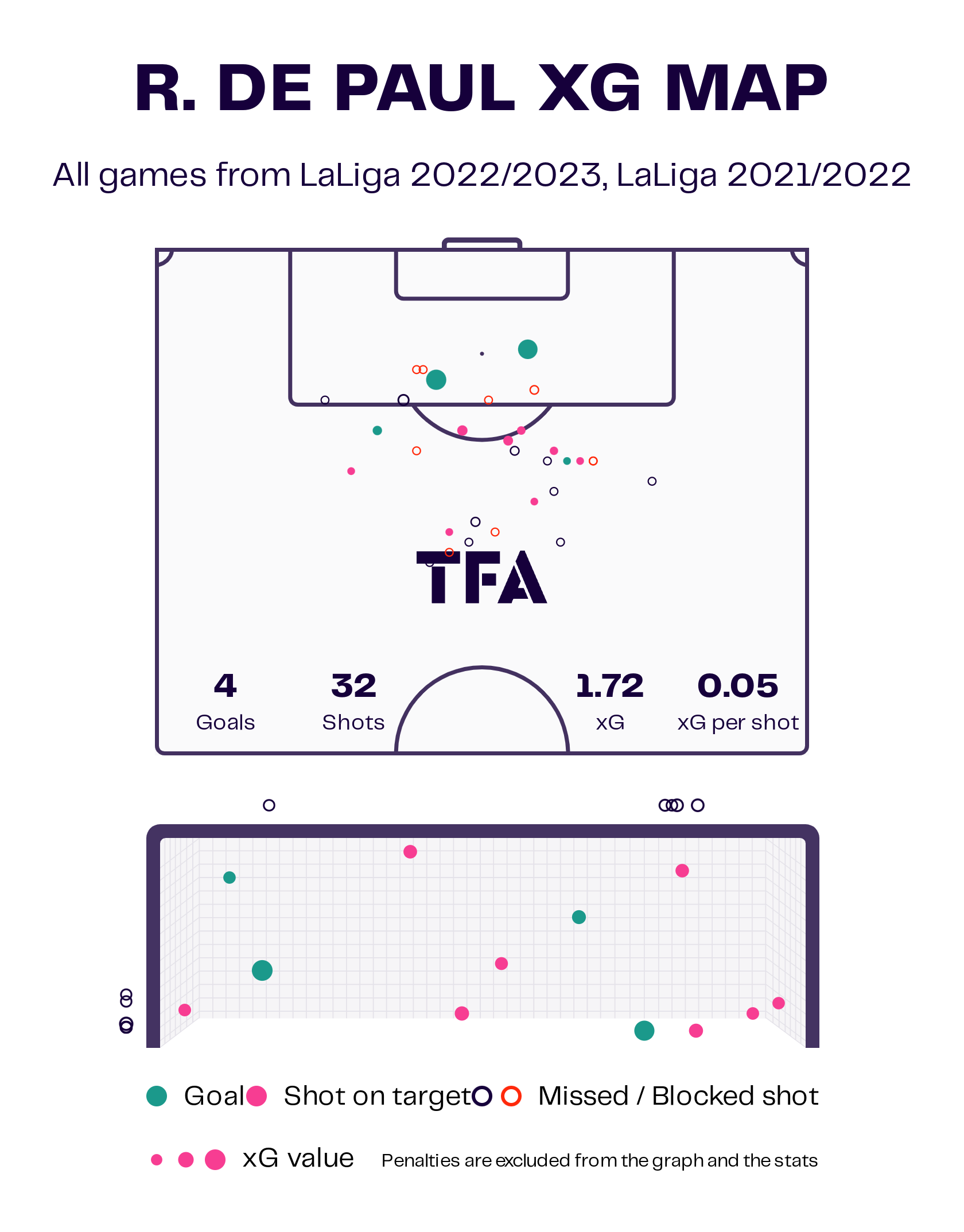 Rodrigo De Paul has scored only four goals combined for Atletico Madrid in the 2022–23 and 2021–22 La Liga seasons. Most of his shot attempts have come from outside the penalty box. Most of the shots have been off-target, and De Paul will look for improvement in the scoring department. He has generated an xG of just 1.72 in 48 appearances for Atletico Madrid in La Liga. His total xG per shot is 0.05. 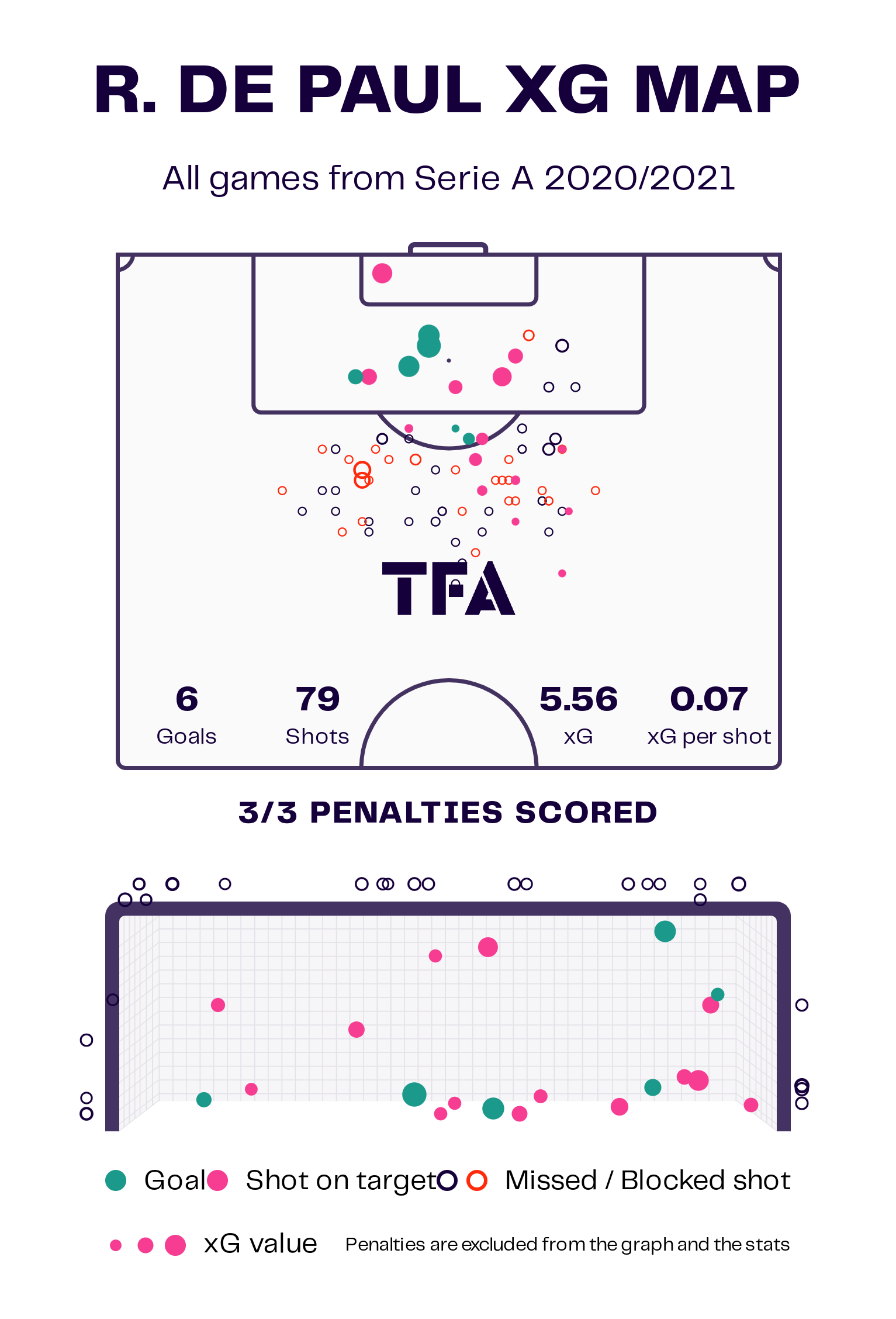 De Paul had a better goal scoring record for the Udinese side, as he was the main focal point of the Udinese side from the midfield. Udinese also used to play attacking football. Meanwhile, at Atletico Madrid, he plays a deeper role, with his primary responsibility being to prevent opposing players from creating a scoring opportunity. Atletico Madrid and Diego Simeone are known for their defensive football, which is one of the main reasons behind the decrease in goals for De Paul.

Whom would De Paul replace? 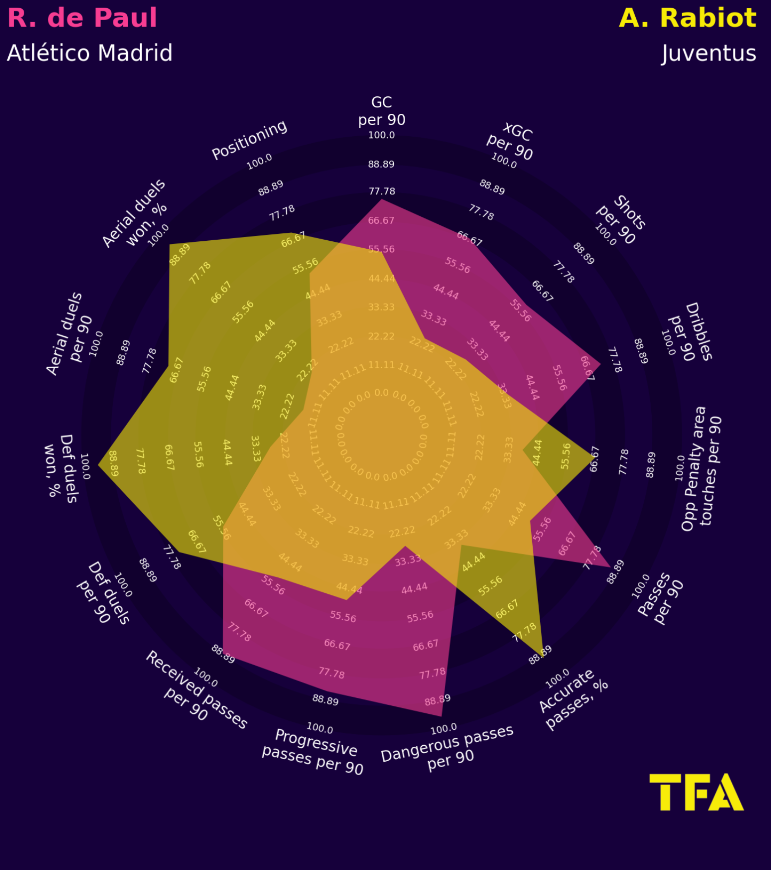 Rodrigo De Paul might replace the 27-year-old French star Adrien Rabiot as a squad player and a starting option for Juventus’ midfield. Both players outperform each other in a few stats. De Paul outperforms Rabiot in terms of progressive passes per 90, dribbles per 90, and dangerous passes per 90. De Paul is only 28 years old and is a midfield powerhouse, which might force Juventus to play him ahead of Rabiot if he moves to the Juventus side in the January transfer window. Rabiot has made 11 Serie A appearances this season, scored three important goals, and provided two crucial assists for his Juventus side. De Paul has scored one goal and provided one assist for his Atletico Madrid side in the 12 appearances he has made in La Liga this season.

Massimiliano Allegri is a coach who has always liked midfielders who can be powerhouses in the midfield and midfielders who have a good balance in attacking, defensive, and possession skills. Rodrigo De Paul is a player that fits perfectly into the Juventus side as he is a central midfielder who has good defensive and playmaking skills. De Paul will provide the much-needed midfield depth required in the current Juventus side and can also offer some creativity from the midfield. He can be a good backup for the midfield duo of Paul Pogba and Manuel Locatelli, so the signing of De Paul makes sense from Juventus’ perspective; still, the transfer should not cost more than 35 million euros.

Why Icardi-less Inter struggled in Wien