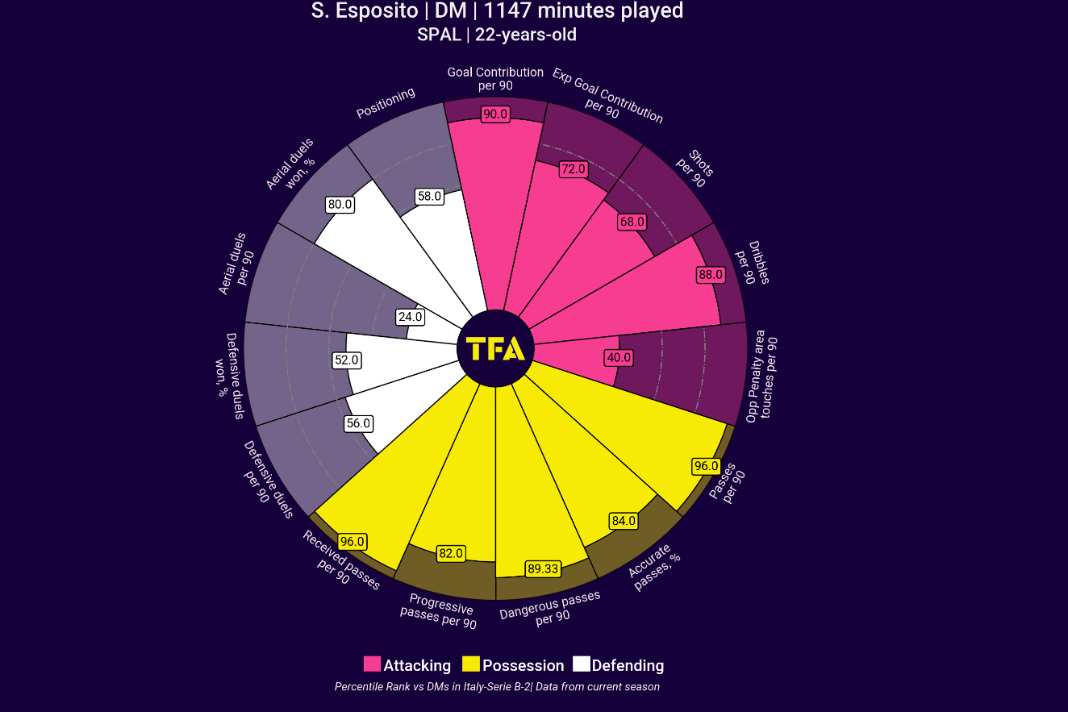 One player who has been a significant performer for SPAL in the Italian Serie B is 22-year-old Italian midfielder, Salvatore Esposito. SPAL have been struggling in Serie B, but the young midfielder has been shining for them and performing like a superstar in the making. Salvatore Esposito also made his senior national team debut this year in March. The Italian midfielder has been an essential player for the struggling SPAL side, scoring two goals and providing two assists in 17 appearances in Serie B. Few Serie A sides, including Spezia, are interested in signing a young midfielder in the recent winter transfer window. 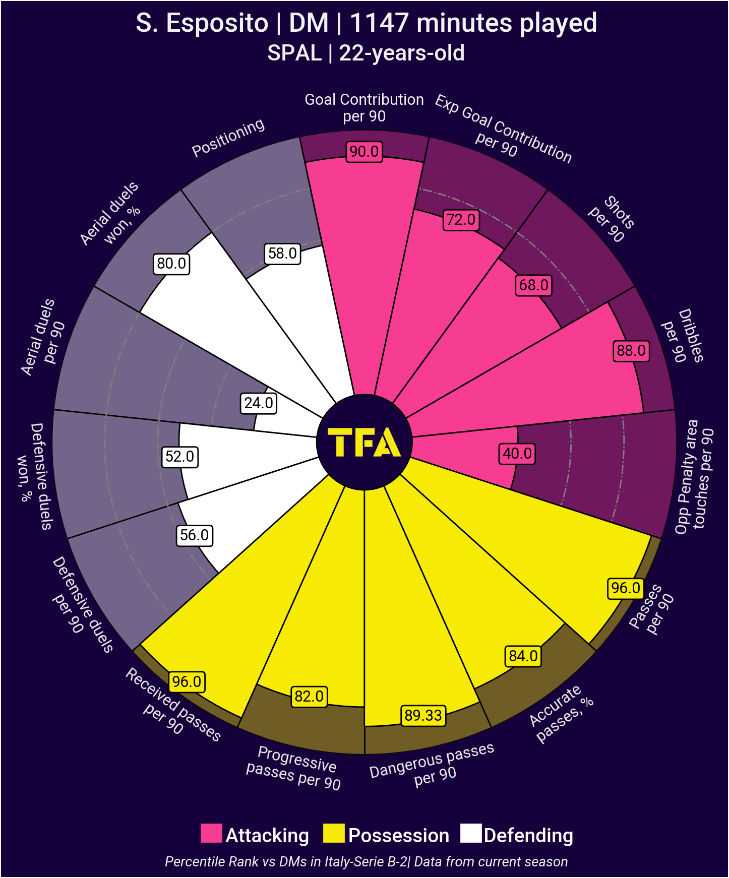 Salvatore Esposito has regularly been an integral part of the SPAL team in Serie B. The Italian prefers to play as a central midfielder or defensive midfielder from the centre of the field. The Italian has played 17 matches in Serie B this season, scoring two goals and providing three assists. The above viz shows the stats of the player in comparison to the other players featured as defensive midfielders in Serie B this season. It is clear that Esposito has dominated the passes per stat. Other stats where he has been dominant are received passes per 90, dangerous passes per 90, and dribbles per 90. 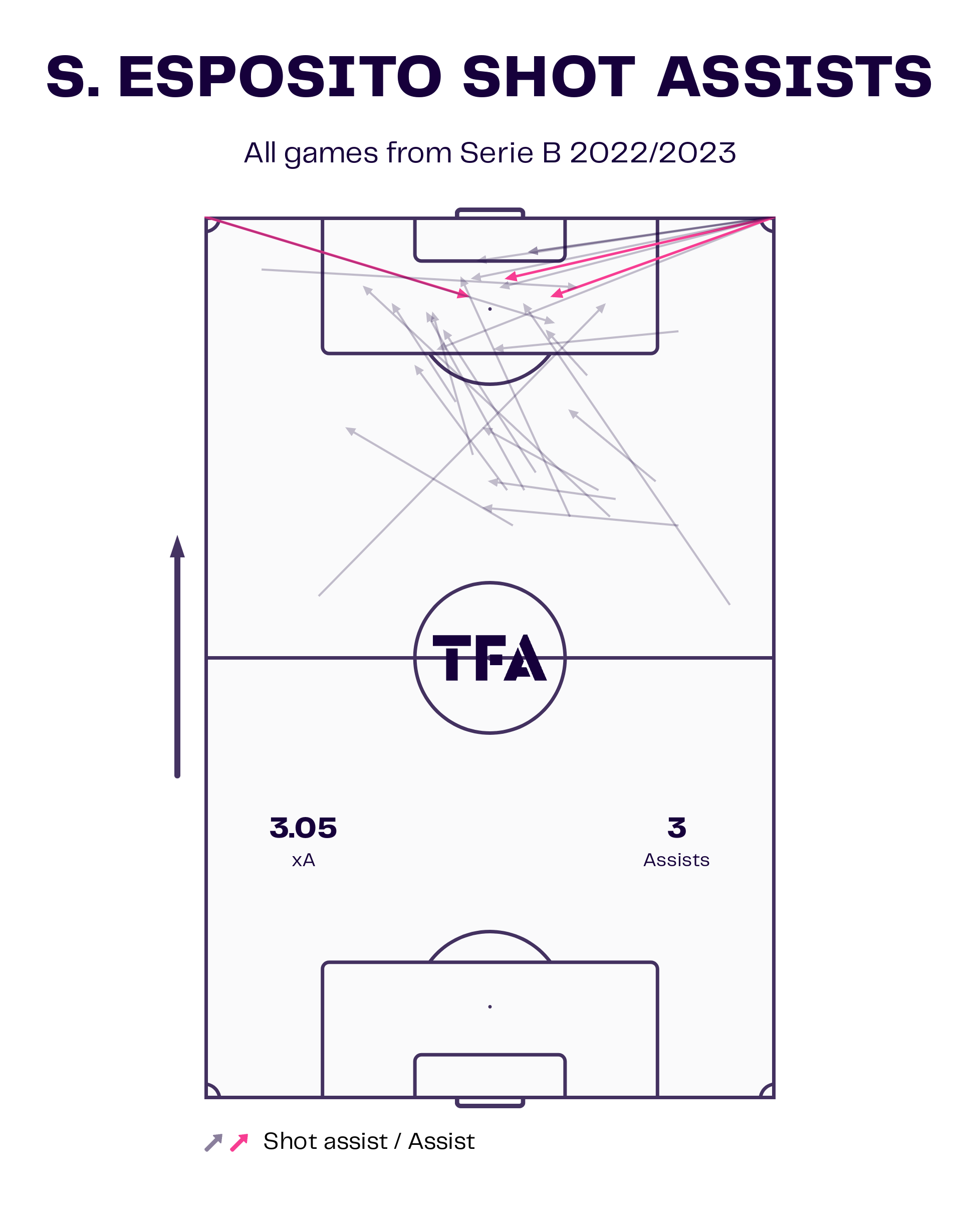 Salvatore Esposito has always contributed to the SPAL side by providing assists and helping them create goal-scoring opportunities. The Italian already has three assists this season. Averaging 59.4 passes per game this season, Esposito has a reasonable accuracy rate of 87%. He averages around 2.2 key passes per game and has provided three assists in Serie B this season, which is reasonably high for a defensive midfielder. 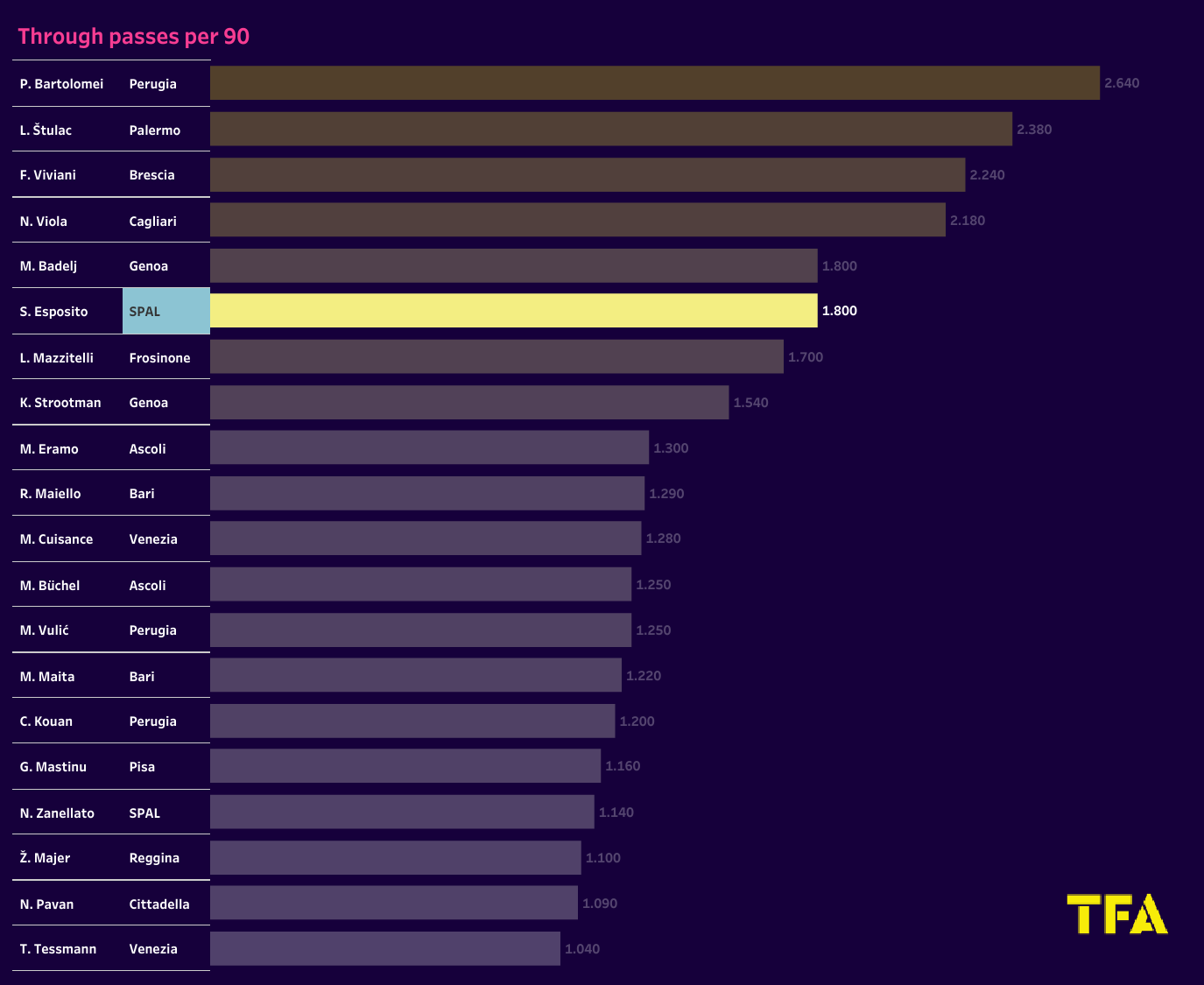 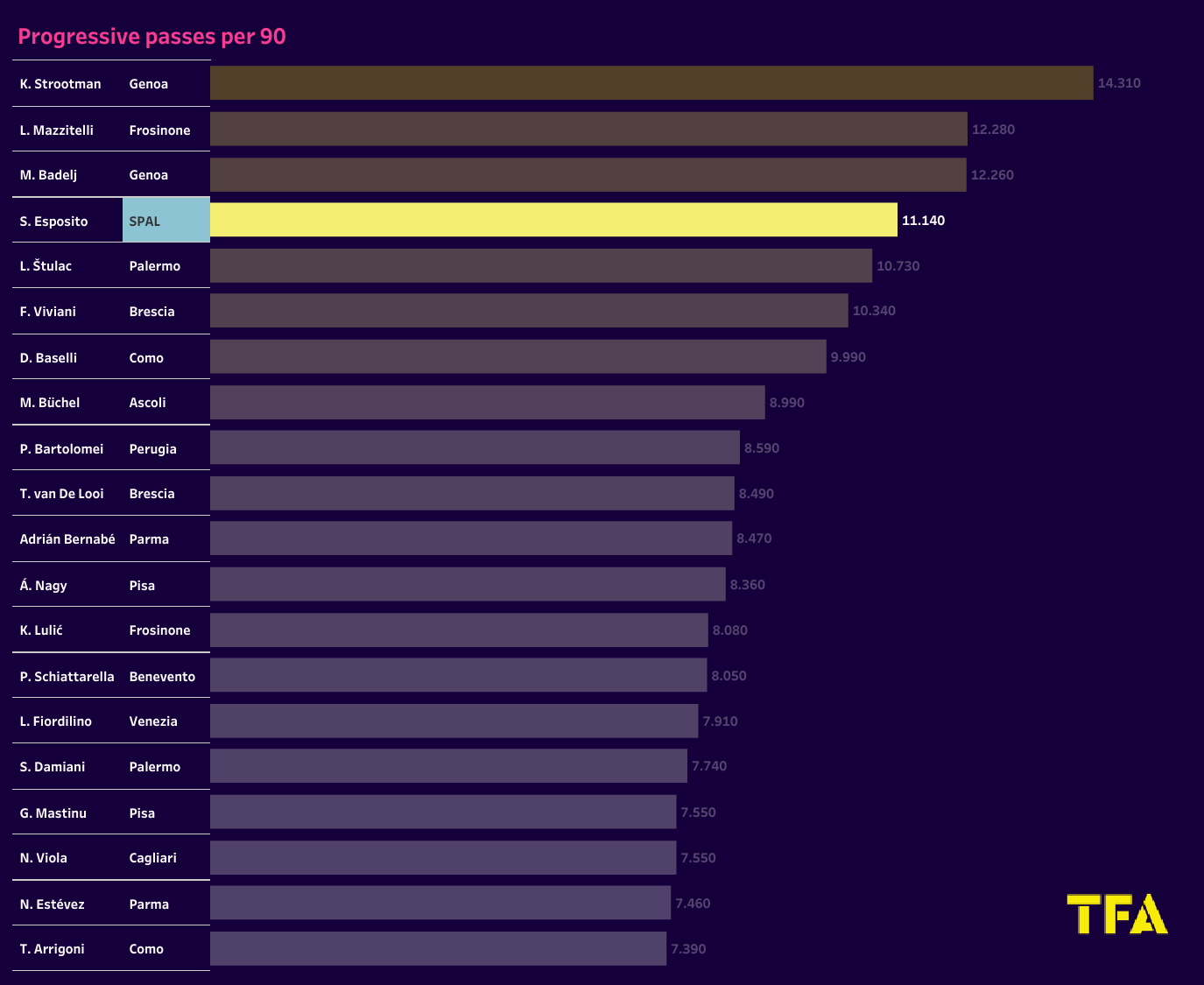 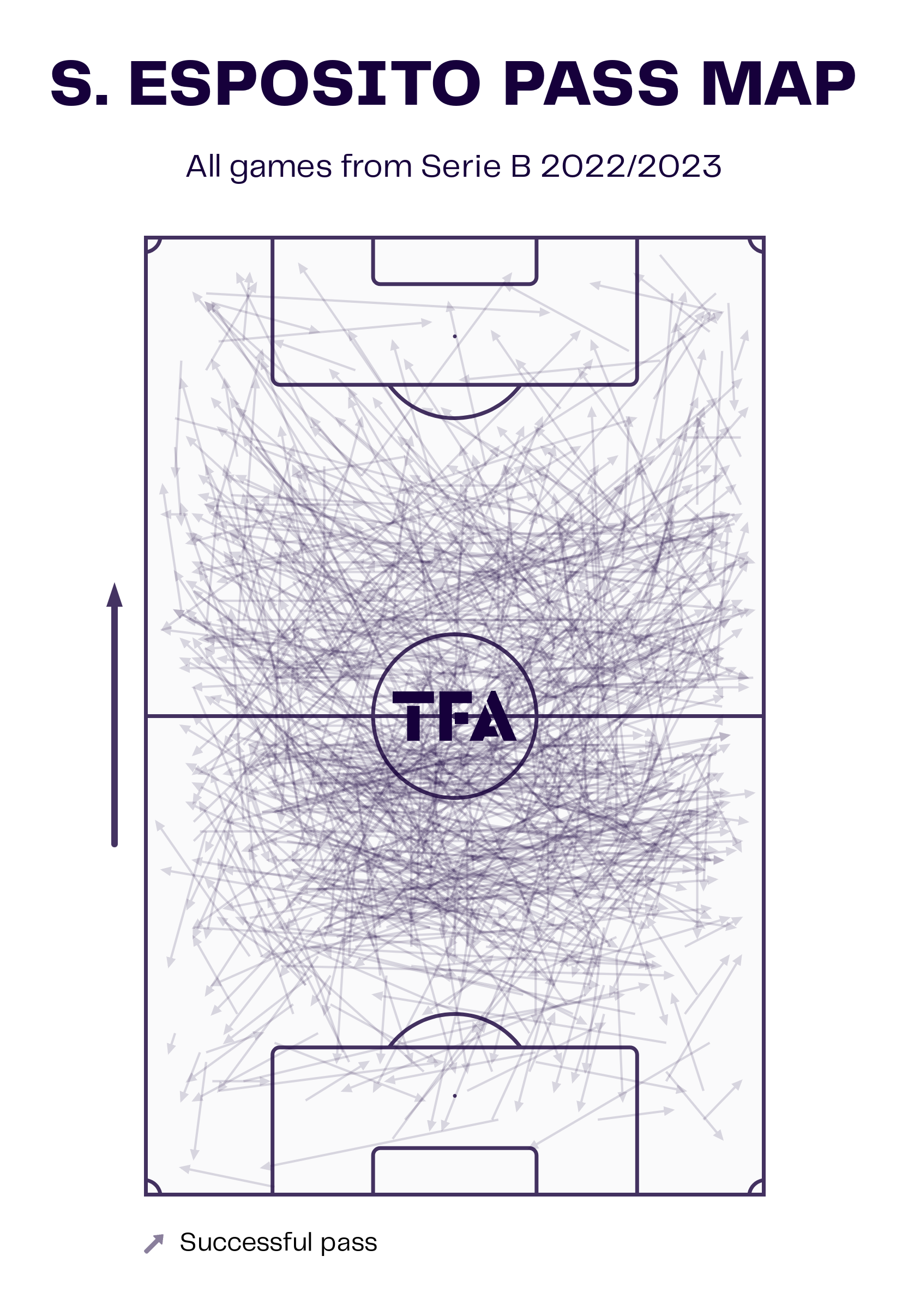 Salvatore Esposito has attempted 1141 passes in the Serie B, the highest by a SPAL player this season. The Italian midfielder has a passing accuracy rate of 87.12 percent. He has also made 37 key passes this season and created three big chances. He is the man who provides creativity and possession of the ball for this SPAL side. Esposito has an xA of 0.27 per 90 minutes, which is reasonably high for a defensive midfielder. 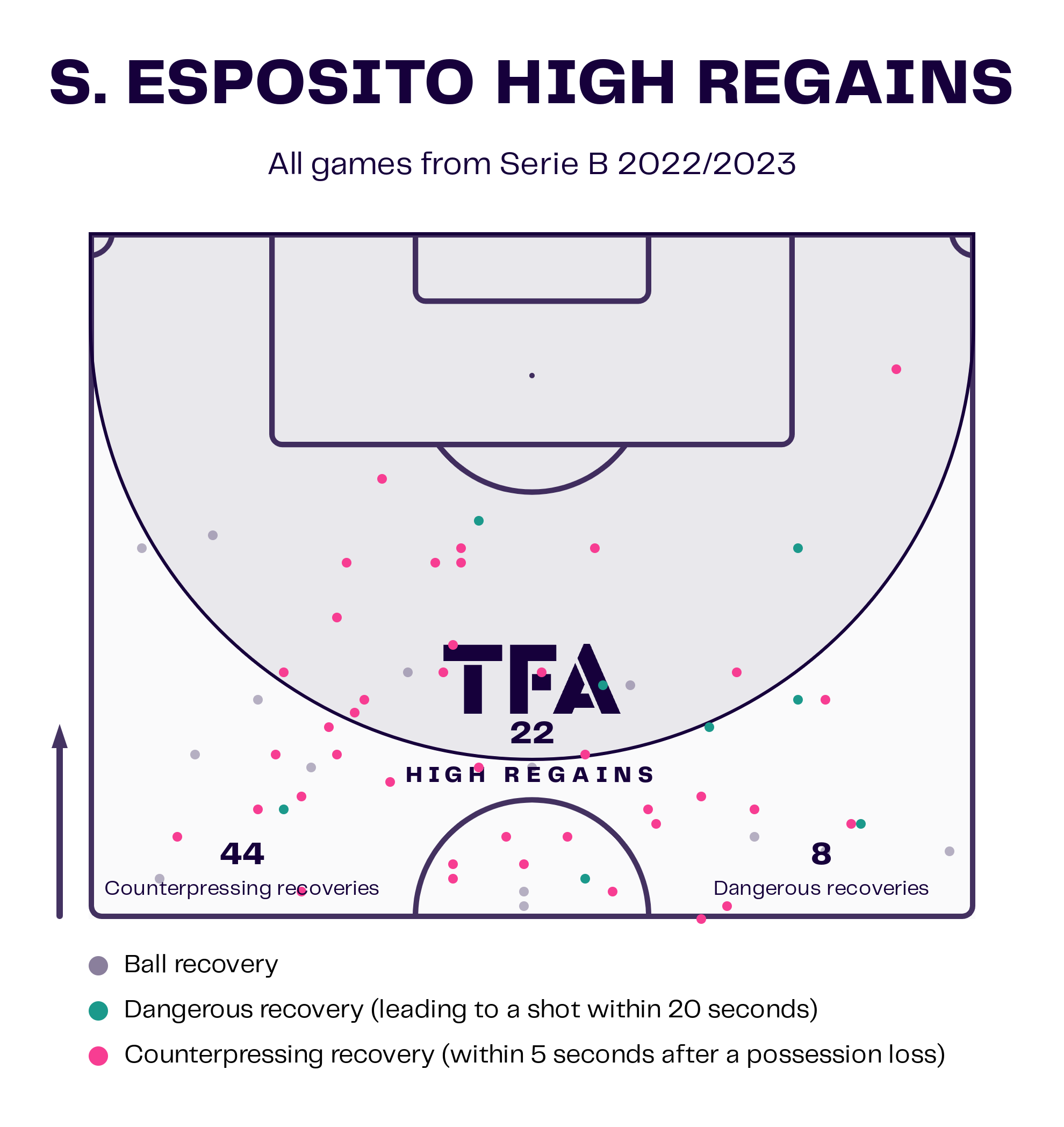 Salvatore Esposito has worked hard to recover the ball for SPAL in dangerous areas. This season, Esposito has managed 22 regains in the final third. Seven of these 22 recoveries have been dangerous and led to a shot within the next 20 seconds of the recovery. The Italian midfielder has made 44 counter-pressing recoveries in Serie B.

Spezia has been struggling in Serie A this season and are currently placed 17th in the table. They need help in all three areas of the game: attack, defence and midfield. The signing of Salvatore Esposito will provide a much-needed midfield presence for this Spezia side. Esposito’s signing for Spezia makes much sense as he will provide the creativity and can perform well on the ball, which is essentially required for a team’s success.

Transfer Analysis: How the Spanish full-back could add more depth to...

Stats Pack: A draw for Brazil in their home game against...