Home Analysis Under the microscope: How Sassuolo have shown signs of struggle in front... 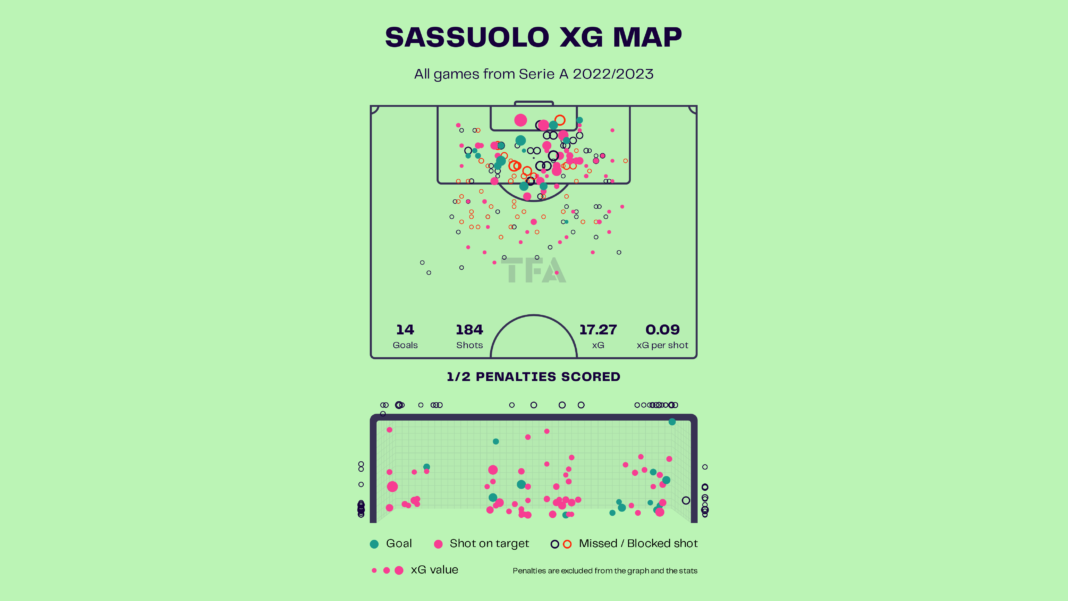 The Italian Serie A side Sassuolo have played impressively in the last few years, finishing consistently in the top half of the Serie A table. Sassuolo has a reputation for playing attacking football, which has earned them a lot of praise. Sassuolo’s attacking football has inspired many neutral fans to closely follow and watch them in Serie A. They are struggling this season, sitting in the 15th position with 16 points and a goal difference of minus seven. They have won four, drawn four, and lost seven, all because of their ineffective attack, and only scored 15 goals this season. We will now look at stats demonstrating why Sassuolo are struggling to score goals this season in the Italian Serie A. 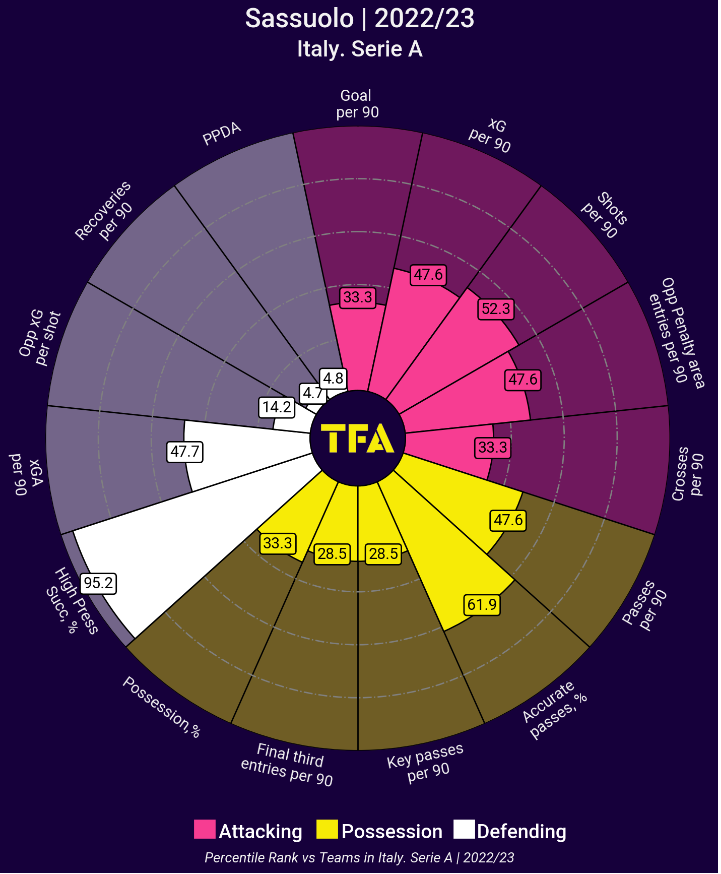 Sassuolo have been unable to win a game in the last four games, drawing once and losing three times. If we dig further, we can see that they have only won once over the previous seven games. In 15 Serie A games this season, Sassuolo has only scored 15 goals and conceded 22. The above viz shows the team’s percentile rank in attacking, defensive, and possession stats compared to other teams in Serie A. We can observe that Sassuolo have performed poorly in every department of the game: attacking, defending, and possession. They are unrivalled in one statistic: press success rate. Sassuolo needs to improve on the attacking front if they want to finish in the top half of the Serie A table this season.

Struggles in the Attack 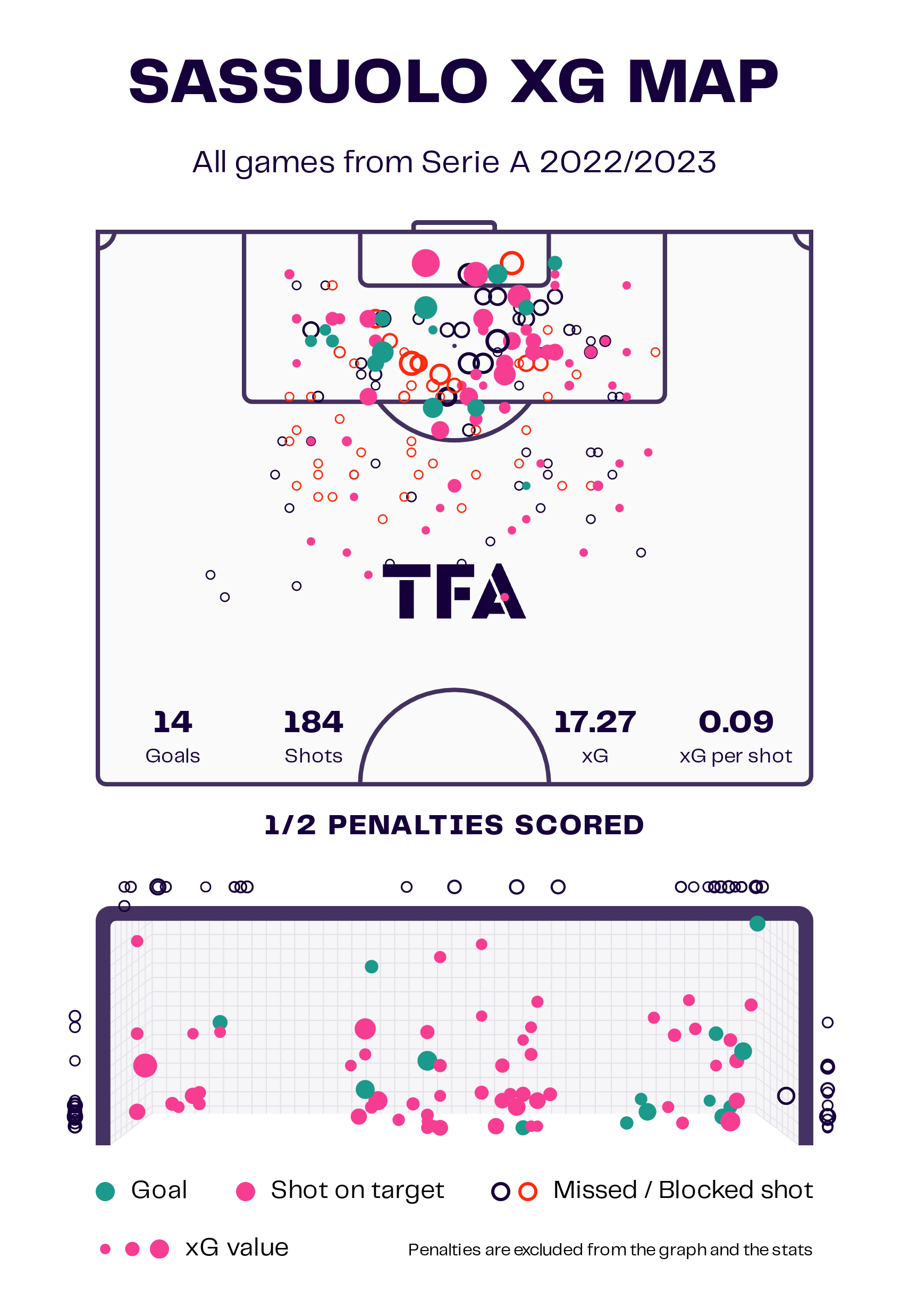 Sassuolo have scored only 15 goals with an average of 1 goal per match, which is comparatively less than the other top-half Serie A teams this season. The above viz shows the shot map of the team in the current season. It can be observed that they have scored most of the goals from inside the box. Sassuolo players have already missed 17 big chances in Serie A this season. Sassuolo have been unable to replace the summer departure of Gianluca Scammacca, and he scored 16 goals during the last season before moving to West Ham United in the summer transfer window. Another reason they are struggling in attack is that their talisman, Domenico Berardi, has missed most of the games due to injuries. 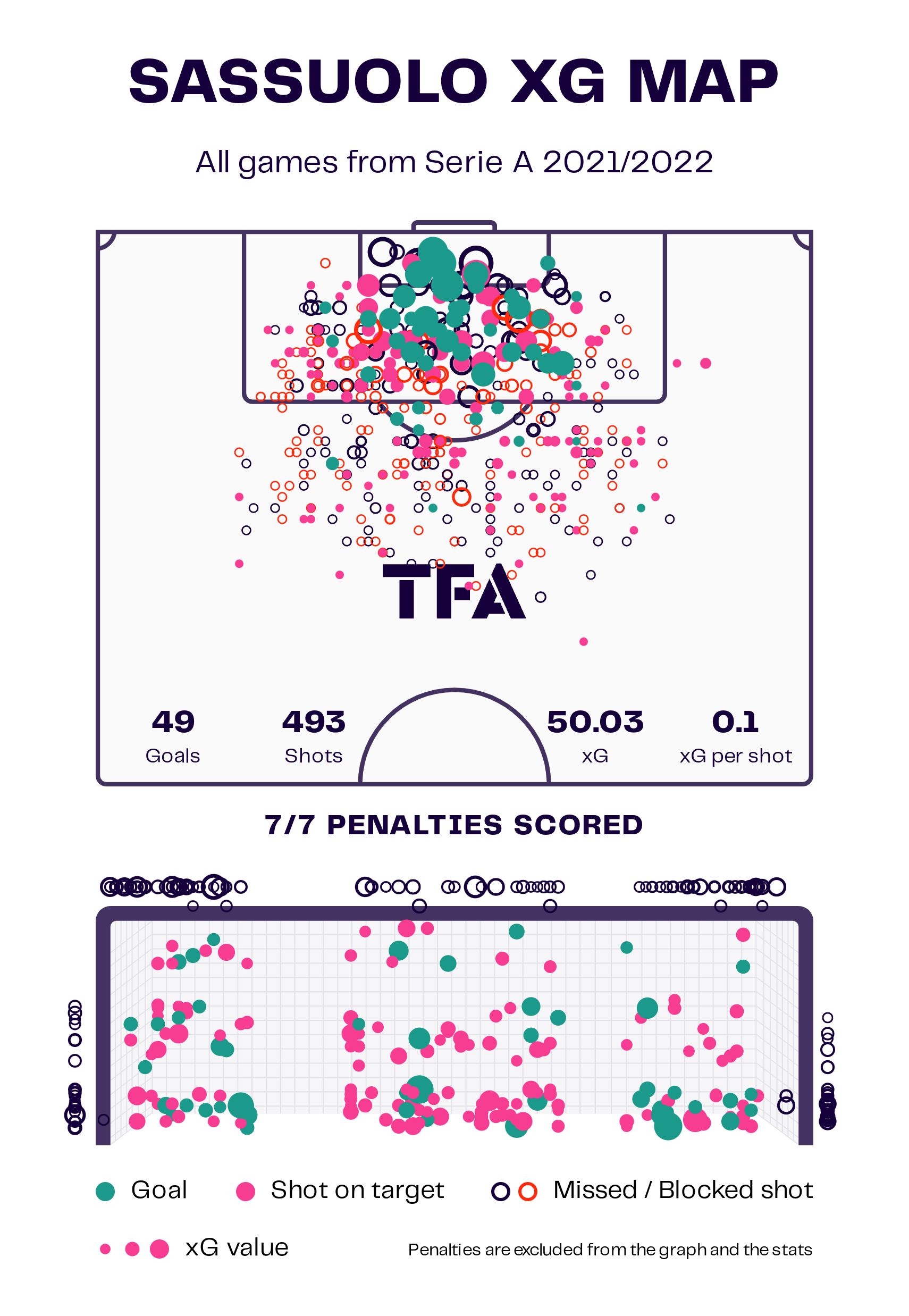 Sassuolo scored 64 goals last season in the Italian Serie A. They were seventh on the list for the most goals scored in Serie A. The main reasons they scored 64 goals were Domenico Berardi and Gianluca Scamacca. Gianluca Scamacca scored 16 goals last season and was the sixth-highest goal scorer. Berardi scored 15 goals and provided 14 assists for this Sassuolo side last season, and he led the chart alongside Ciro Immobile for goal contributions in the previous Serie A campaign. 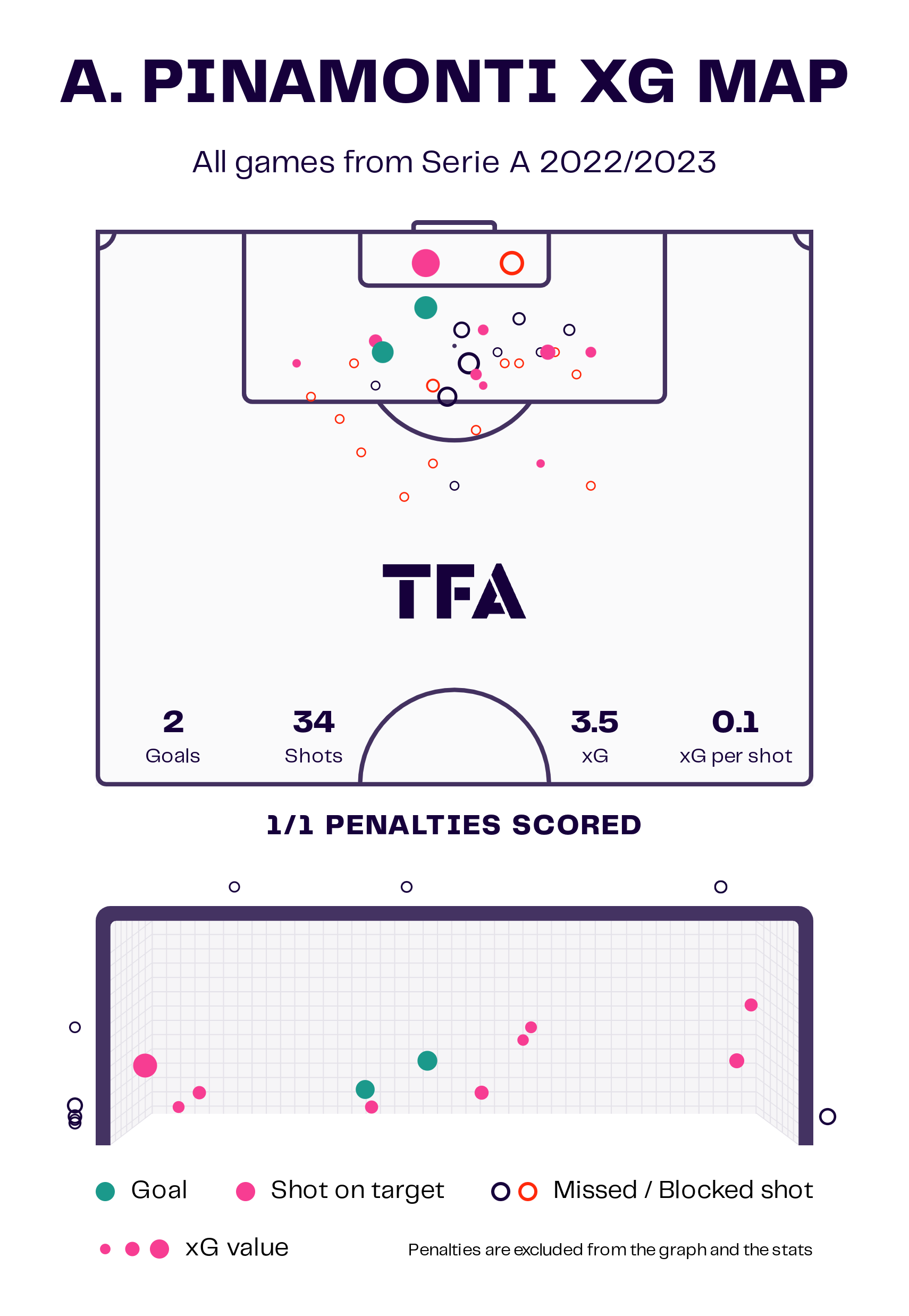 Andrea Pinamonti, a 23-year-old Italian striker, signed in the summer transfer window by Sassuolo to replace Gianluca Scammacca, has been unable to find his scoring touch this season. He has scored three goals in his 15 Serie A appearances this season. The Italian striker has a shot conversion rate of 8.6%, which is relatively low for any good central forward. He has taken 35 shots and has a goal-scoring frequency of 387 minutes. 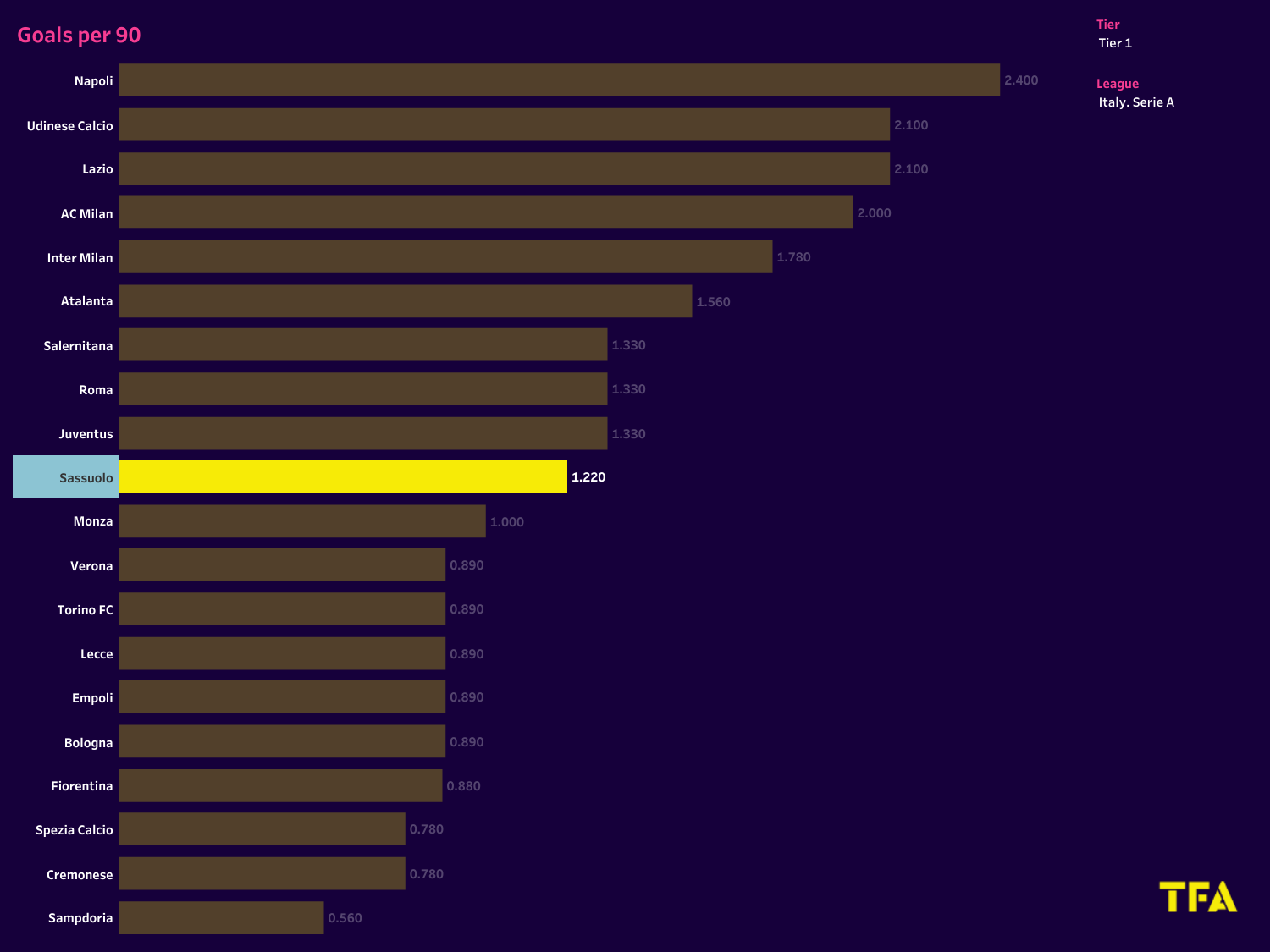 Sassuolo have scored 1.22 goals per 90 minutes in their 15 Serie A appearances this season. The Italian side creates 1.50 xG per 90 and has 0.09 xG per shot. Alessio Dionisi’s men average 13 shots per 90. The xG is relatively high because Sassuolo players have taken most of the shots from the dangerous area inside the 18-yard box. 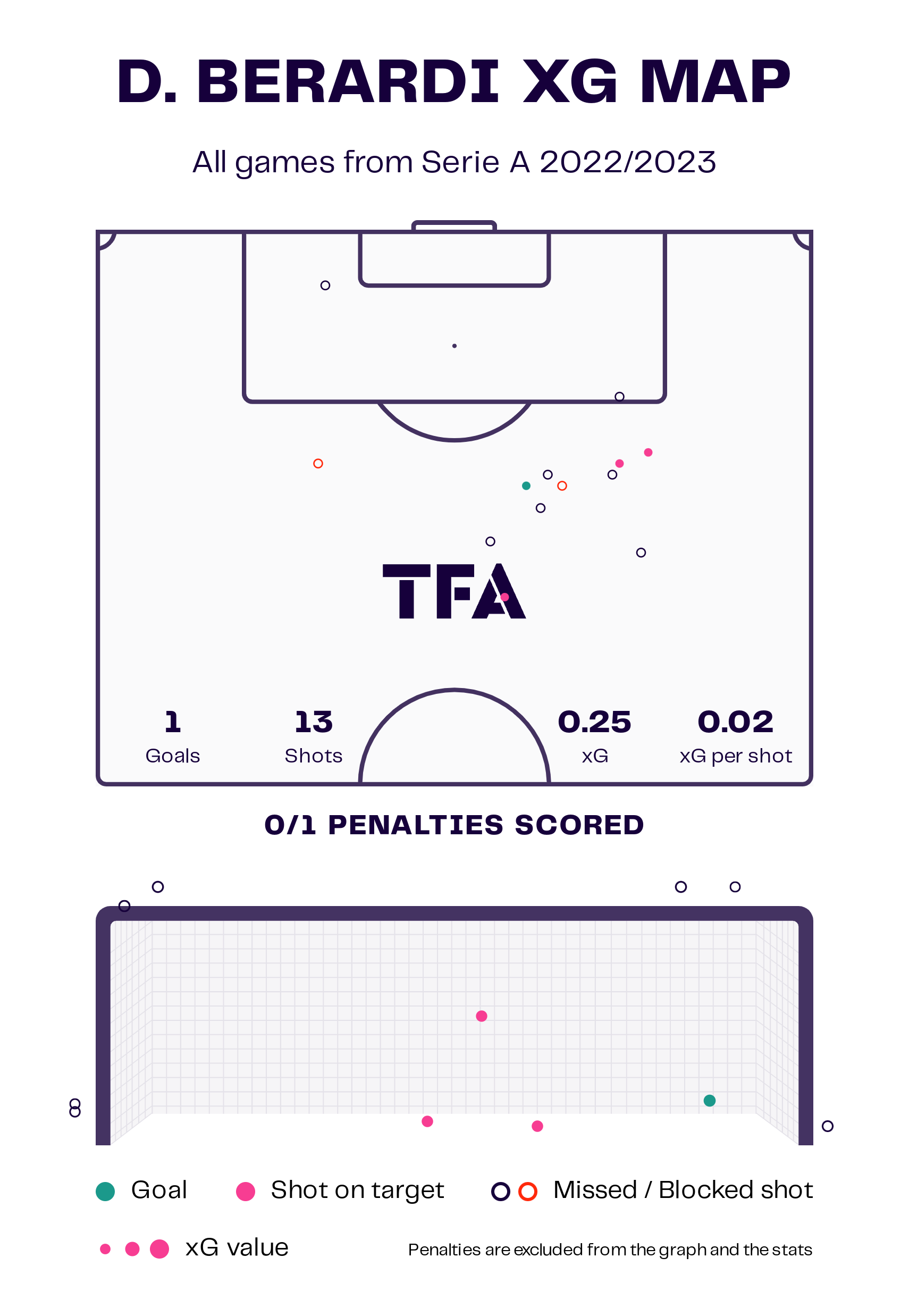 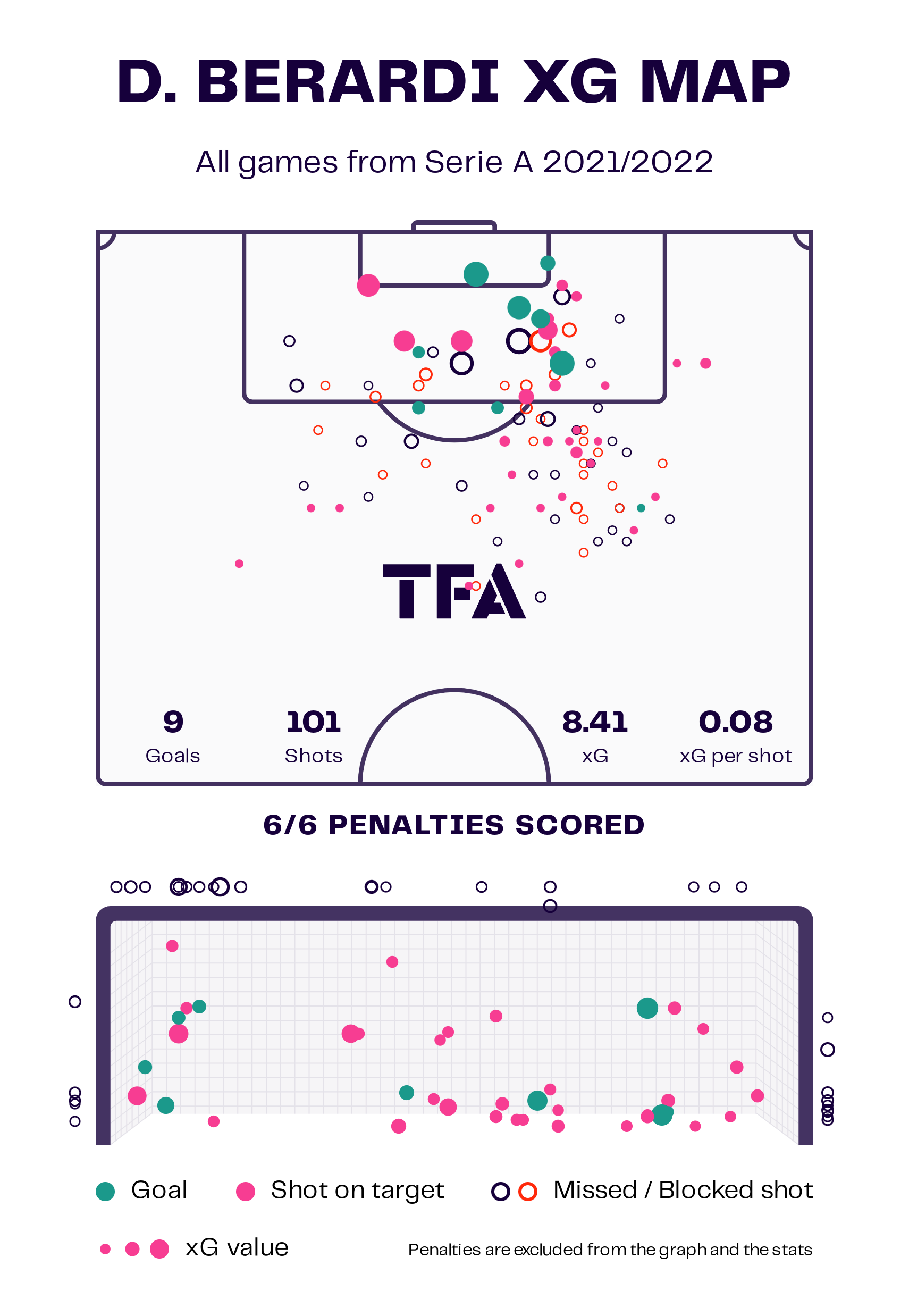 Sassuolo’s talisman, Domenico Berardi, has struggled due to a few injuries this season and has made only seven appearances (only four starts) in Serie A this season. The 28-year-old winger has only scored one goal this season and provided zero assists until now in the Italian Serie A. Berardi scored 15 goals and provided 14 assists for this Sassuolo side last season. He led the chart alongside Ciro Immobile for goal contributions in the previous Serie A campaign.

Sassuolo has been a pretty inconsistent side in attack this season. The Italian side needs to improve in front of the goal if they want to finish in the top half of Serie A once again. Alessio Dionisi would hope that Pinamonti and Berardi get into shape when Serie A resumes after the new year and help the team for another top-half finish.

How did Arsenal’s efficiency grind out victory over Napoli?

Under the microscope: How M’bala Nzola’s goal-scoring performances can guide Spezia...