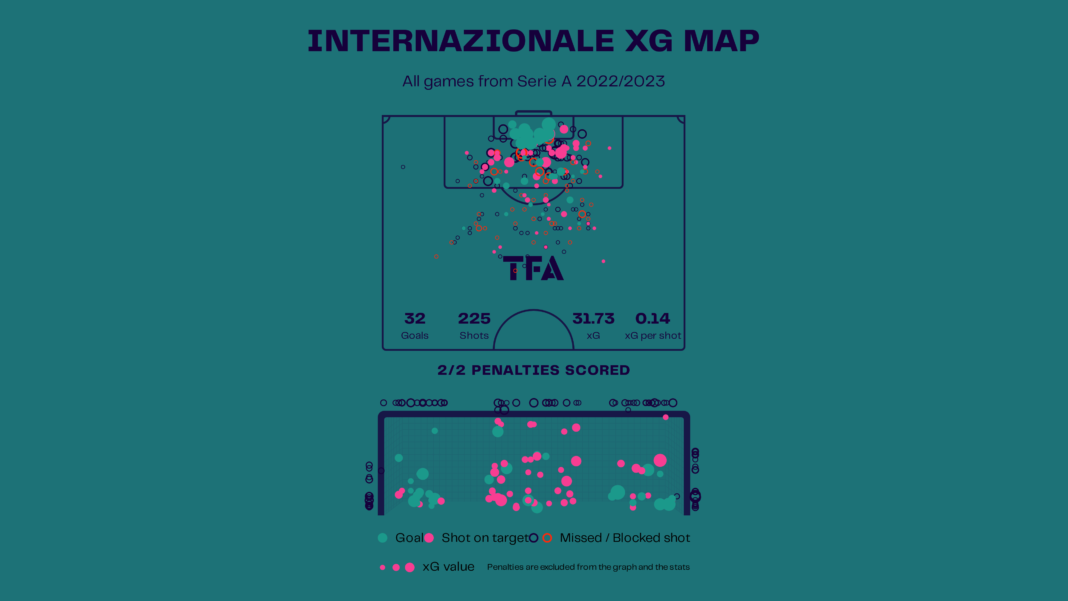 Inter Milan will look to continue their winning streak in Serie A when they face Monza at Stadio Brianteo on matchday 17. Monza played a 1-1 draw against Fiorentina. Inter Milan won one goal to nil against the table toppers Napoli on their return to top-flight action after a seven-week break for the World Cup.

Inter Milan will be keen to keep the pressure on third-placed Juventus, who are one point ahead of fourth-placed Inter Milan. They remain in contention to qualify for the UEFA Champions League.

Meanwhile, Monza currently sits 15th in the top-flight standings, eight points clear of the relegation zone, and 13 behind the European positions. They have scored 17 and conceded 23 goals in 16 matches played. 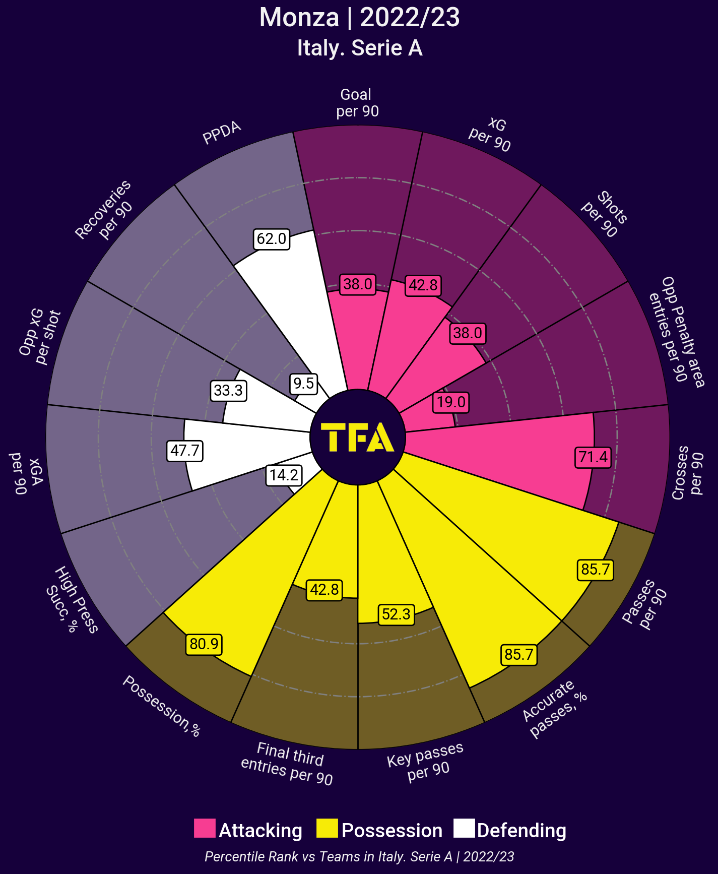 The above viz shows the percentile rank of the home team in comparison to other Serie A teams. Monza are having difficulty putting up numbers in the charts. We can observe that Monza are ranked very low in the attacking and defending department. Monza are able to complete a good number of passes per 90 and have an 85.7 percentile rank against teams in Serie A. They complete 477 passes per 90 on average, with an overall pass accuracy of 86.7%. 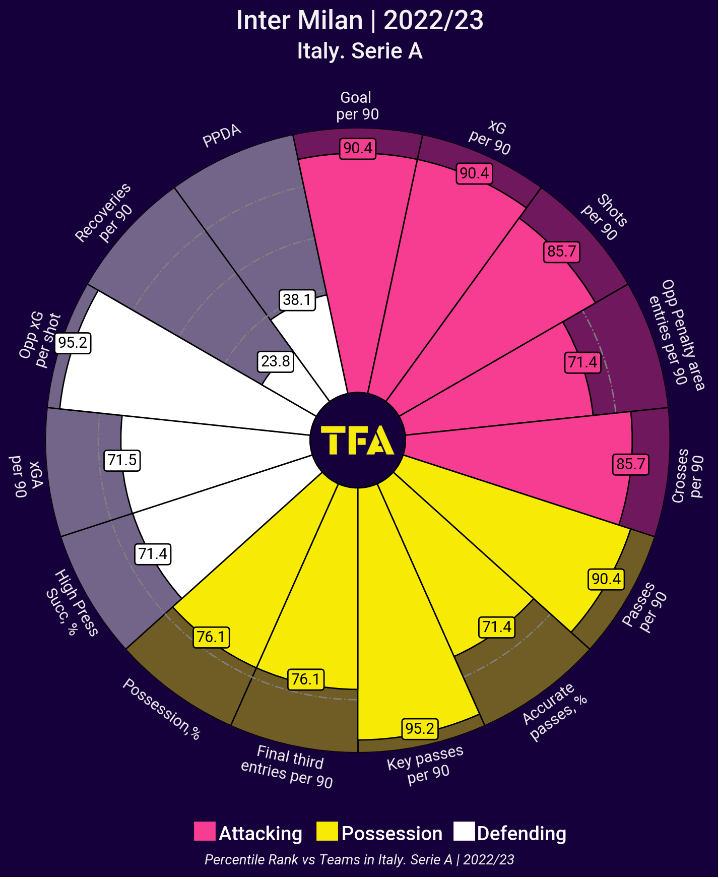 The above viz shows the percentile rank of the away team in comparison to other Serie A teams. Inter Milan have had a mixed start to the Serie A campaign this season. Inter Milan have struggled to get a result in their favour against the top Serie A teams, having lost games against Lazio, Milan, Roma, and Juventus. Inter Milan are currently heading towards European glory in terms of securing a spot that gives them a chance to compete in the Champions League. They have become a high goal-scoring team, and their percentile rank is high in the attacking department. Inter Milan are very strong regarding goals per 90 minutes and xG per 90. Inter Milan dominates most of the stats regarding possession, especially key passes per 90 and passes per 90. In defence, they have been below average this season, conceding 22 goals already in just 16 Serie A games. 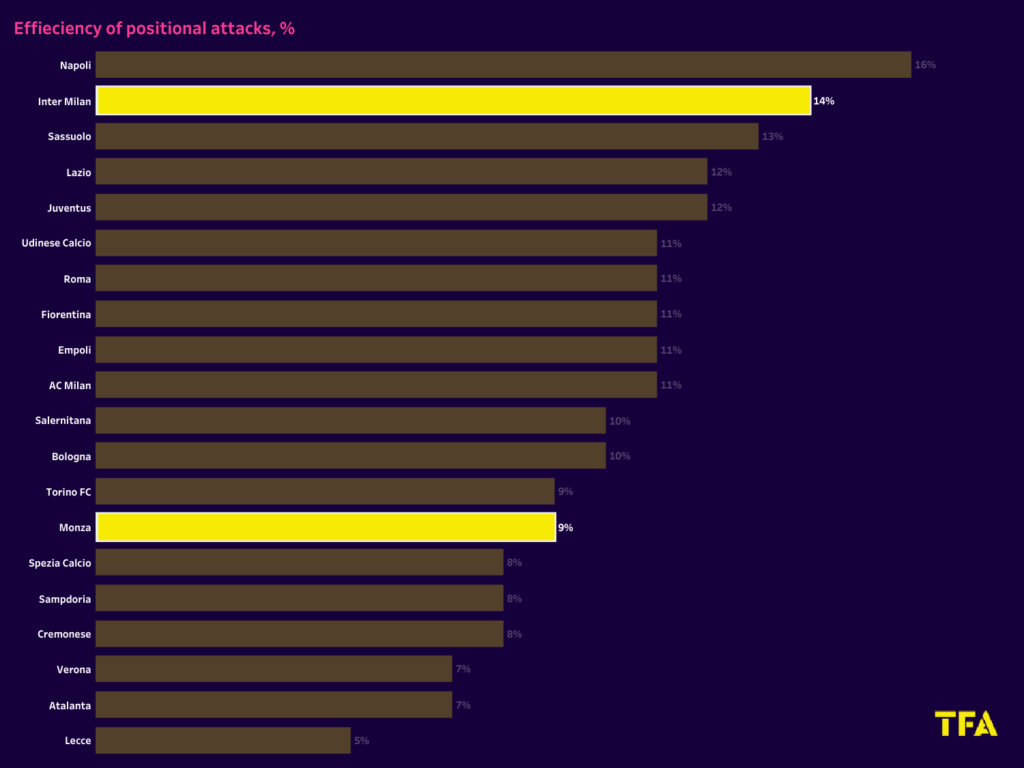 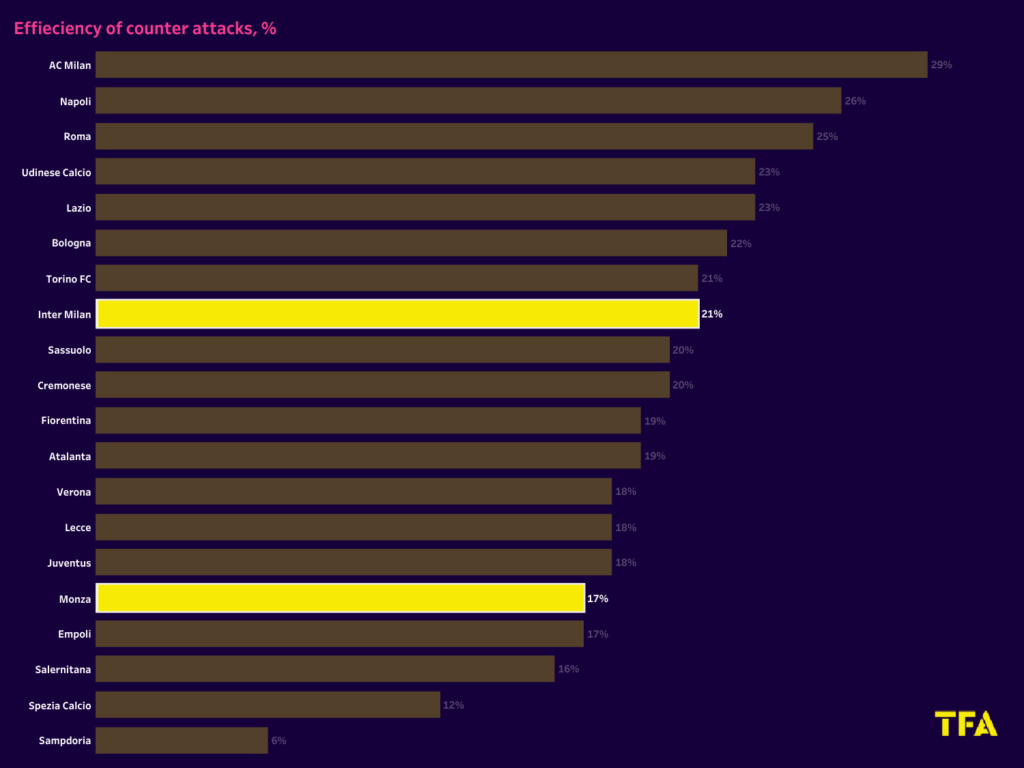 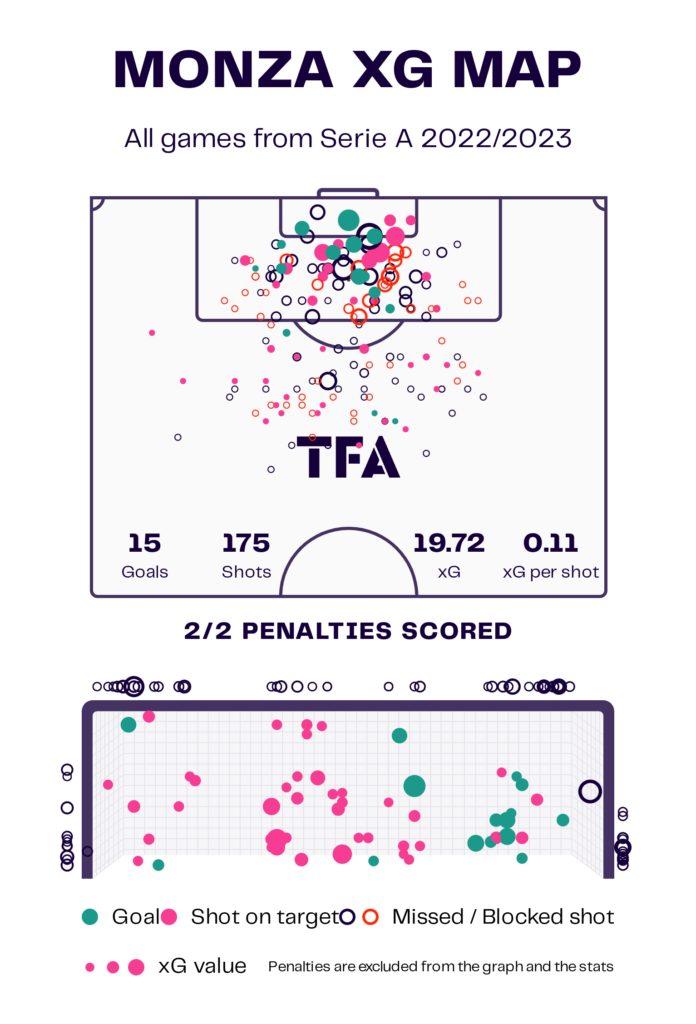 Monza are currently 15th in the 2022-23 Italian Serie A, with 17 points from 16 games played. They have won five matches, drawn two, and lost nine. They have scored 17 goals and conceded 23. We can observe from the above viz that the team has scored most of its goals from inside the box. Monza players have massively underperformed their xG this season. Monza have an xG per 90 of 1.72 and an average of 12.61 shots per 90. 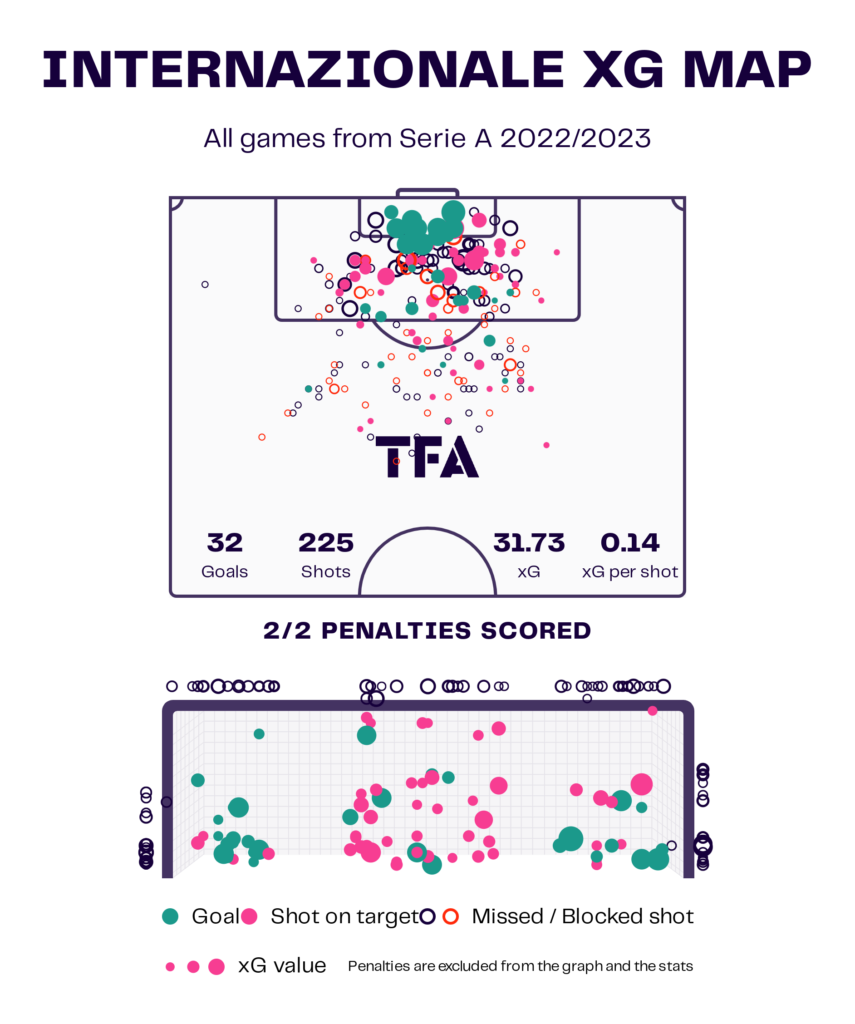 Inter Milan are currently fourth in the 2022-23 Italian Serie A, with 33 points from 16 games played. They have won 11 matches, drawn zero, and lost five. They have scored 35 goals and conceded 22 goals. We can observe from the above viz that the team has scored most of its goals from inside the box. The team has also scored a few goals from outside the box. Inter Milan have an xG per 90 of 2.08 and an average of 14.19 shots per 90. 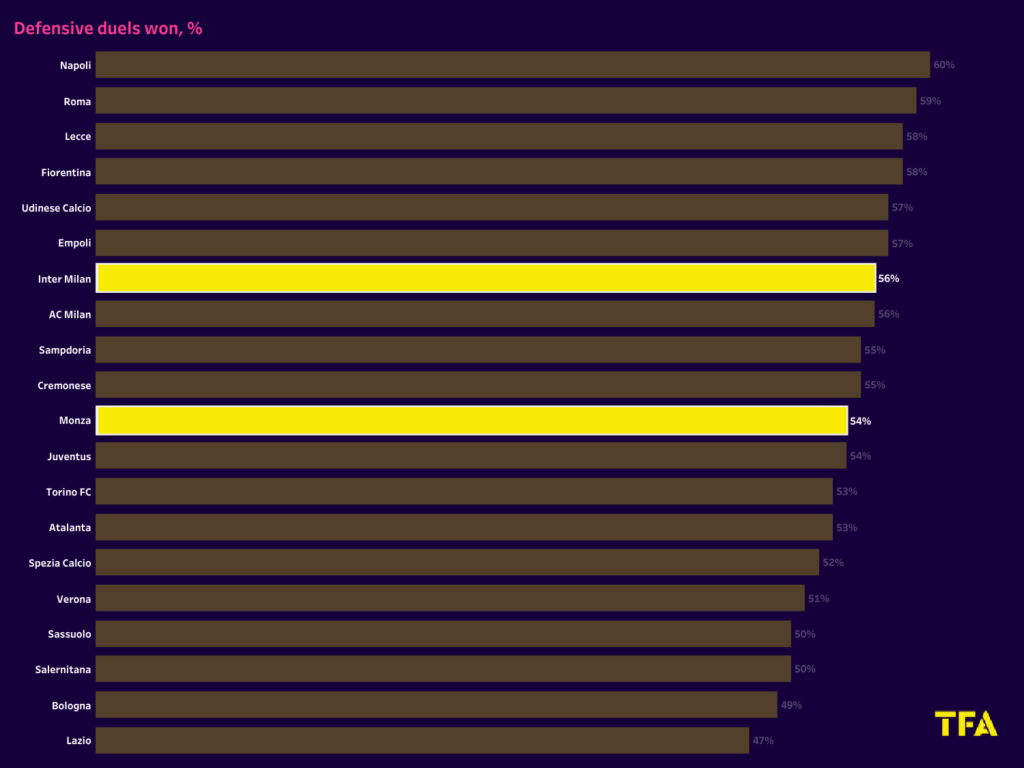 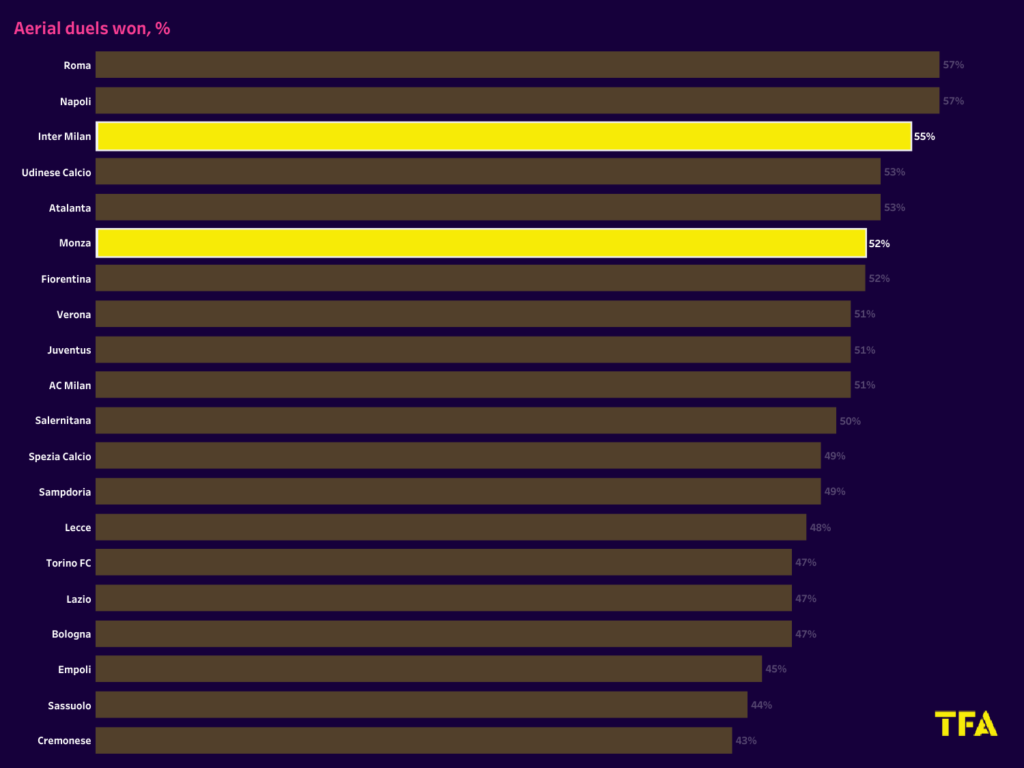 The above chart represents the ranking of teams in Serie A based on their percentage of defensive and aerial duel wins. It can be seen that Inter Milan are ranked seventh with a 56% win rate in defensive duels. Monza, however, is not far behind at 54%. On average, the home team makes 40.39 interceptions versus 36.19 interceptions per 90 for Inter Milan. Inter Milan are the superior team in the air, winning 55% of their aerial duels to Monza’s 52%. 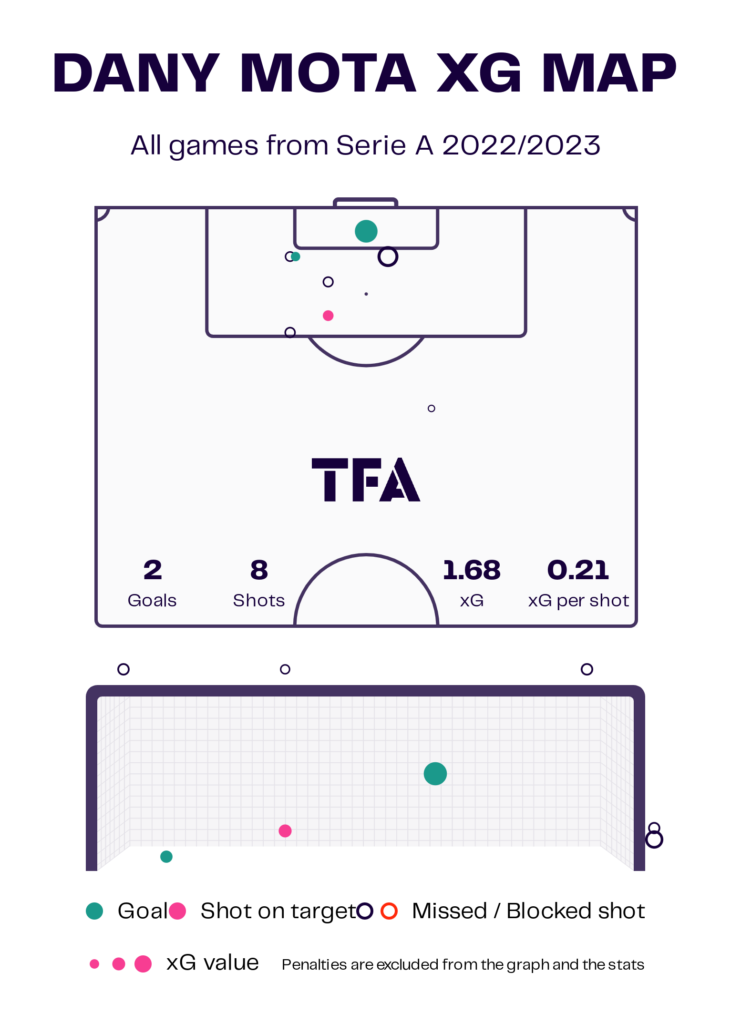 Dany Mota is likely to lead the line for the home team. Mota has scored two goals in the current season of Serie A. Mota’s pace allows him to press opponent defenders. He will look to take advantage of this in the match. Mota has provided two goal contributions in 11 Serie A appearances this season. 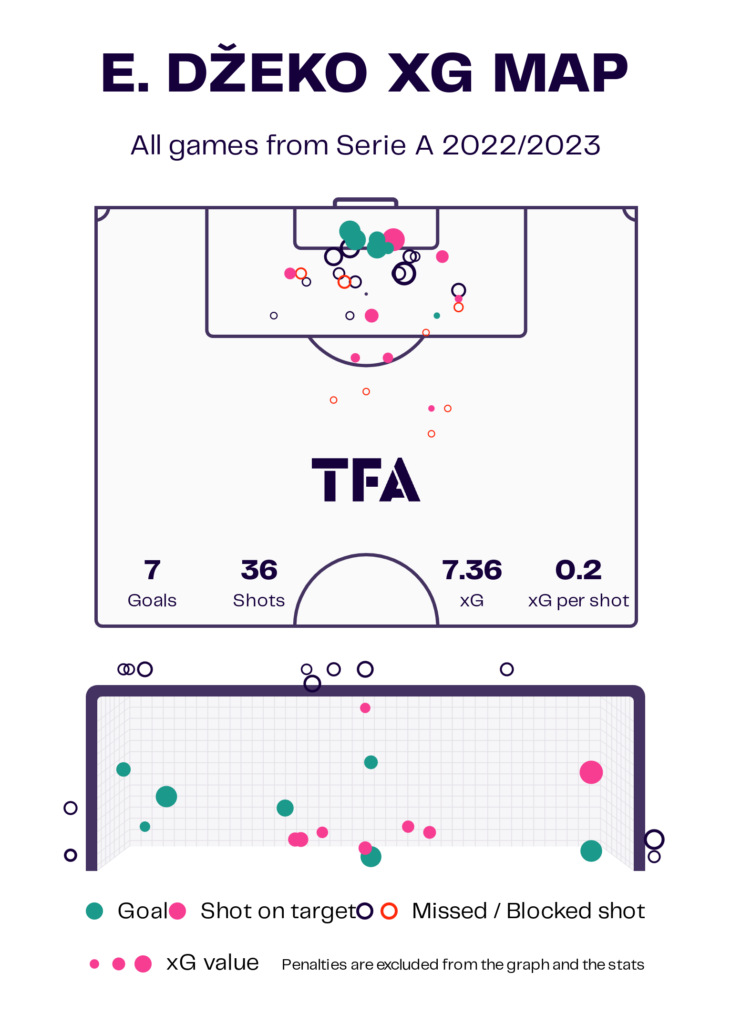 Edin Dzeko is likely to lead the line for the away team. He has scored seven goals and provided two assists in the current season of Serie A. Dzeko likes to score against the big teams. He scored a brace against Atalanta, one goal against Napoli, and one goal against Milan. Edin Dzeko’s height allows him to beat the opposition’s defence on aerial duels and crosses. He will look to take advantage of this in the match. Dzeko has provided nine goal contributions in 16 Serie A appearances this season.

Monza might miss the services of their main midfielder Stefano Sensi. Most Monza players are fully fit and expected to start with their first-choice line-up.

Brozovic will not be fully fit for the game against Monza; Mkhitaryan could replace him in the starting lineup. Most Inter Milan players are fully fit and expected to start with their first-choice line-up.

This might be Game Week 17’s one of the interesting matches as two teams, one fighting for a top-four position and another fighting for survival in the Serie A, go head-to-head at Stadio Brianteo. Monza will have the home advantage, but it won’t be easy for them to beat Inzaghi’s Inter Milan. Both teams will need a bit of magic in the attack and hope their strikers get on the scoresheet.