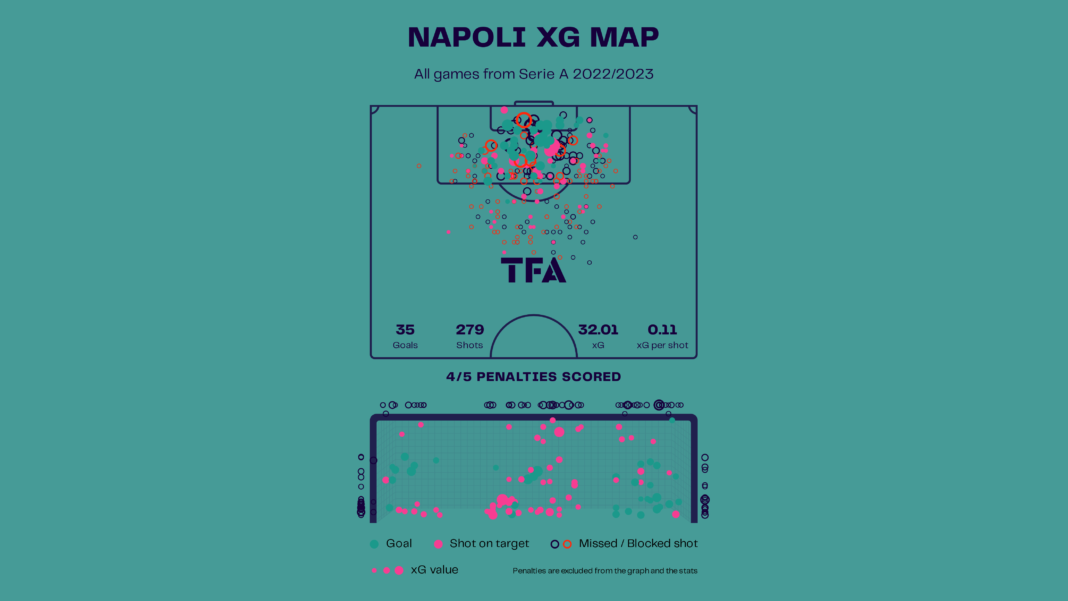 Juventus will be looking to continue their winning streak in Serie A when they face table-toppers Napoli at Stadio Diego Armando Maradona in game week 18. Napoli will look to make a big statement victory against the second-placed Juventus side, who are on a run of eight consecutive Serie A wins. Juventus won 1-0 against the struggling Udinese side in the game in Week 17. Meanwhile, Napoli easily defeated 10-man Sampdoria 2-0.

Napoli will be hoping to win against second-placed Juventus and extend their lead over the in-form Juventus to ten points. They will be optimistic about securing maximum points in front of their fans.

Meanwhile, Juventus will be eager to keep the pressure on table-toppers Napoli, who currently have a comfortable lead of seven points over second-placed Juventus. 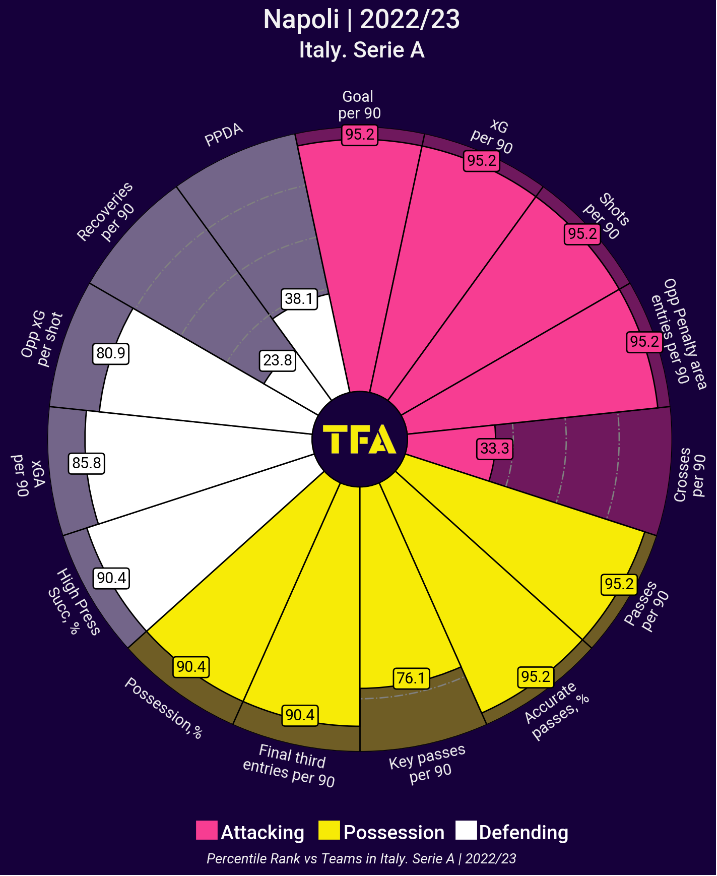 The above viz shows the percentile rank of the home team in comparison to other Serie A teams. Napoli have had an incredible start to the Serie A campaign this season, winning 14 games, drawing two, and losing one. Napoli have scored the most goals and conceded the second-lowest number of goals in the current Serie A campaign. Napoli have been dominant in all three game departments: attacking, defending, and possession. Napoli are solid in regards to goals per 90, xG per 90, and shots per 90. Napoli dominates most of the stats regarding possession, especially passes per 90, accurate passes %, and final third entries per 90. In defence, they are efficient in terms of pressing and rank at the 90.4 percentile for a high pressing success rate with a pressing efficiency of 53%. In this match, Napoli is the more dominant team, demonstrating their potential as a team to beat this season. 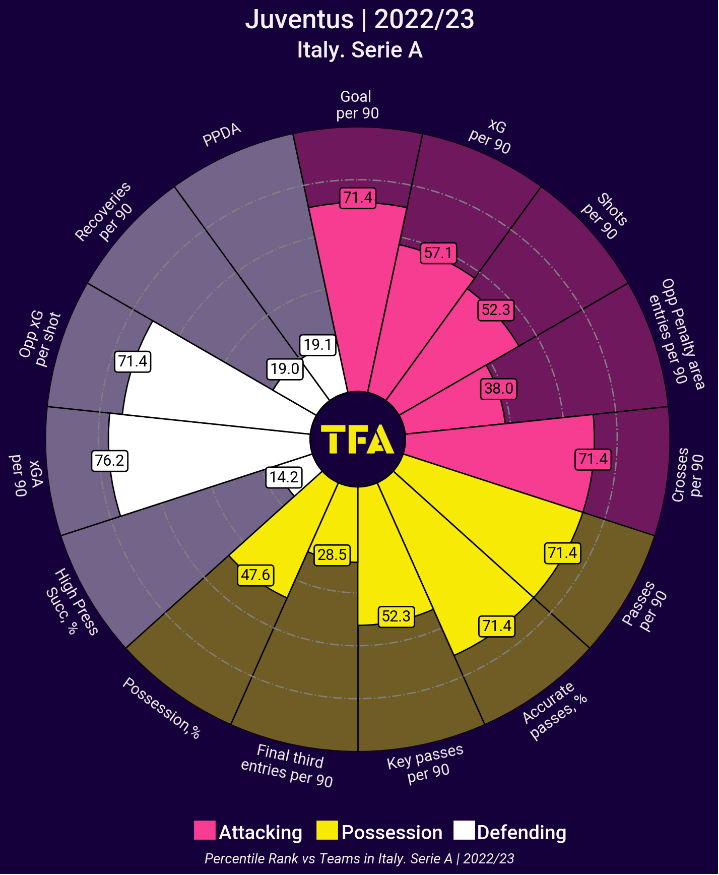 The above viz shows the percentile rank of the away team in comparison to other Serie A teams. Juventus have had an incredible start to their Serie A campaign this season, sitting second in the table. Juventus are currently heading towards European glory in terms of securing a spot that gives them a chance to compete in the UEFA Champions League. It can be observed that Juventus are ranked above average in most of the stats. Juventus have performed well in the goals per 90 and crosses per 90 stats. Another stat where they have performed well is in passes per 90. Juventus have conceded the fewest goals in the current Serie A campaign, conceding only seven in the 17 Serie A games. 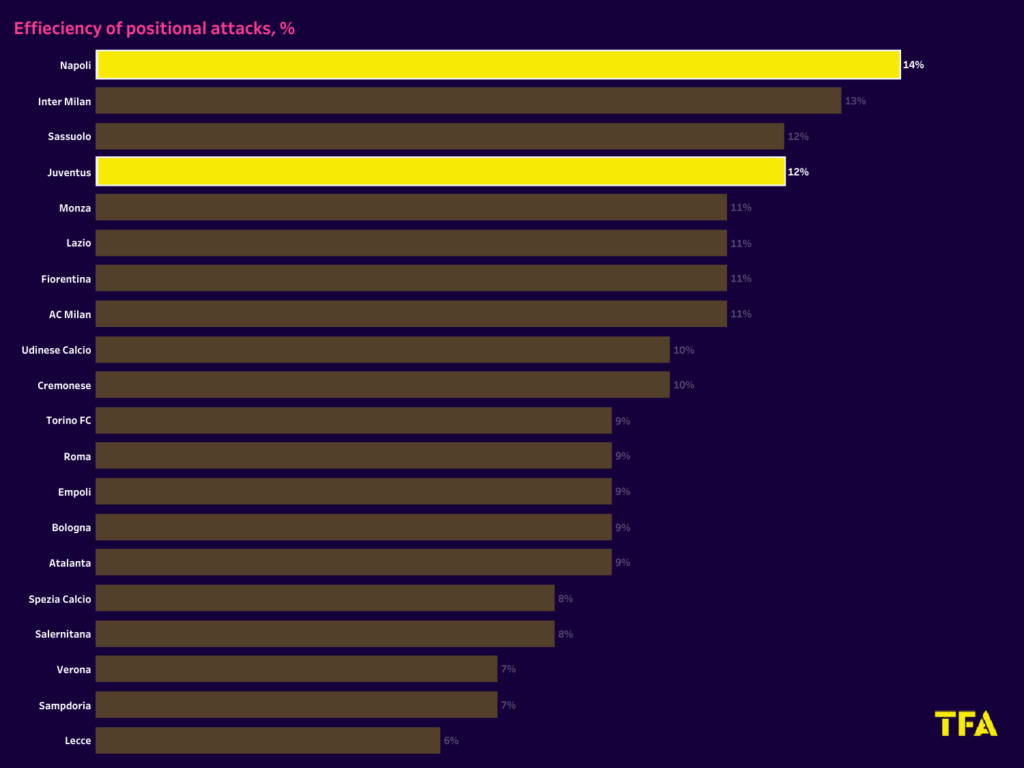 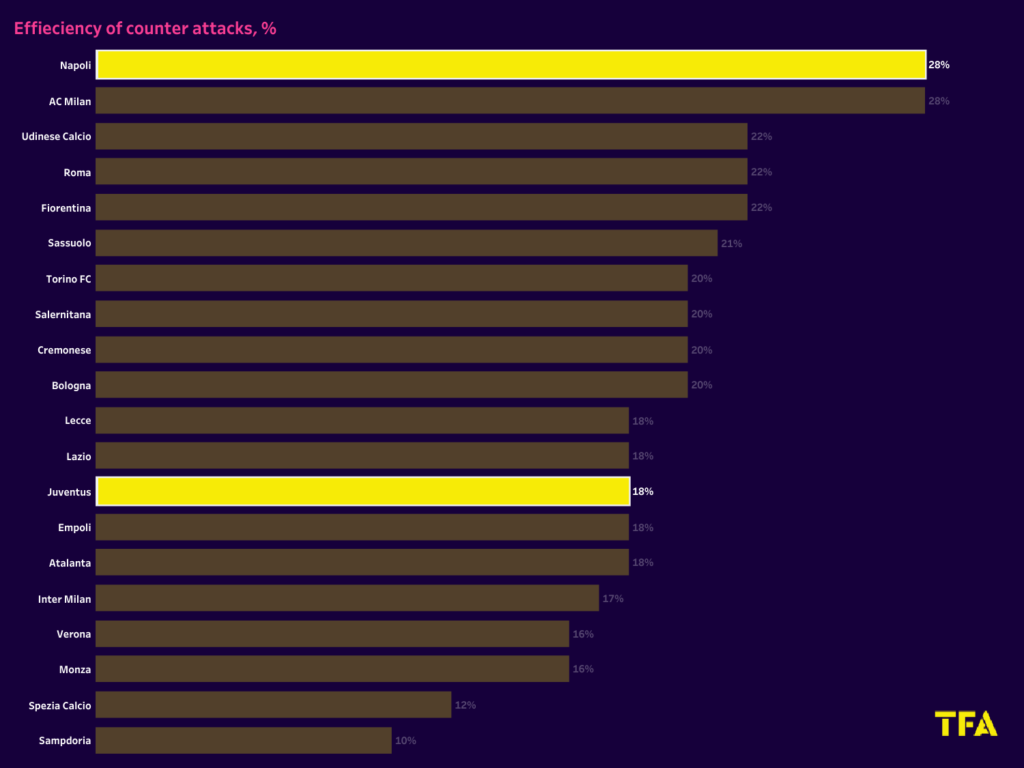 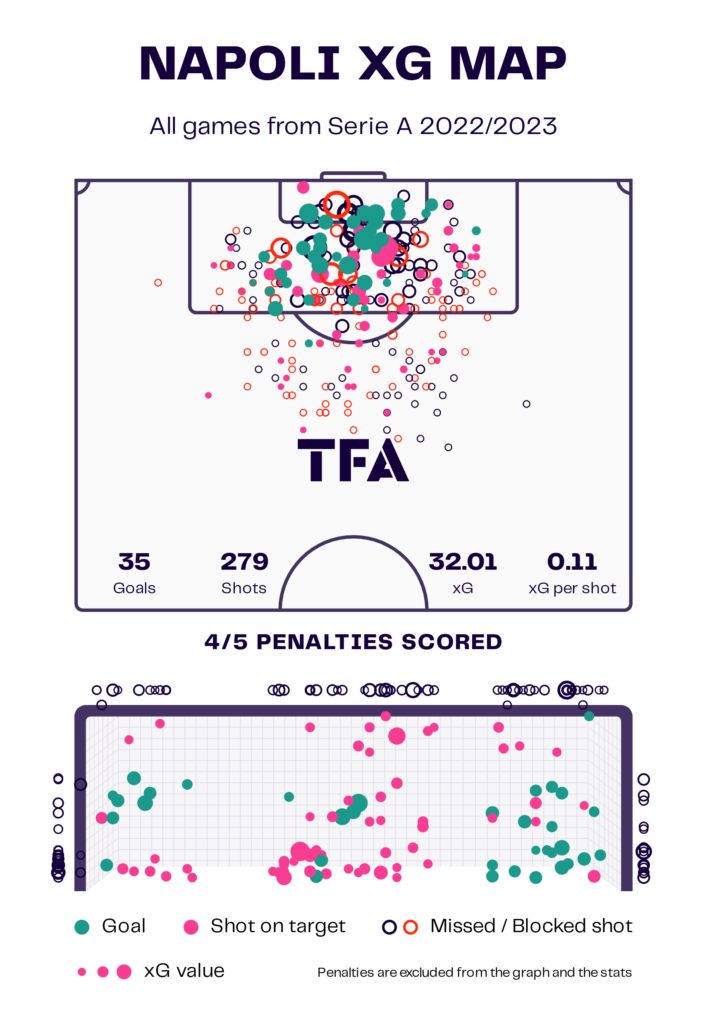 Napoli are currently first in the 2022-23 Italian Serie A, with 44 points from 17 games. They have won 14 matches, drawn two, and lost one. They have scored 39 goals and conceded 13. We can observe from the above viz that the team has scored most of its goals from inside the box. The team has also scored a few goals from outside the box. Napoli have an xG per 90 of 2.11 and an average of 16.71 shots per 90. 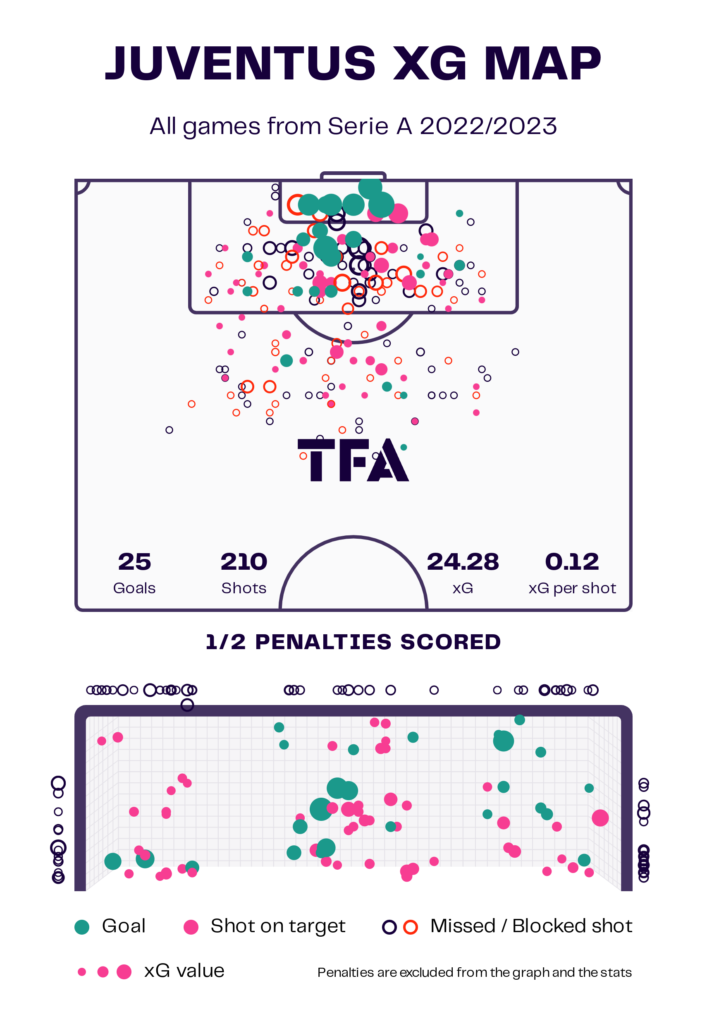 Juventus are currently second in the 2022–23 Italian Serie A, with 37 points from 17 games played. They have won 11 matches, drawn four, and lost two. They have scored 26 goals and conceded seven. We can observe from the above viz that the team has scored most of its goals from inside the box. The team has also scored a few goals from outside the box. Juventus have a 1.53 xG per 90 and a 12.47 shot per 90 average. Juventus players have created 36 big chances and missed 19 big chances in the current Serie A season. 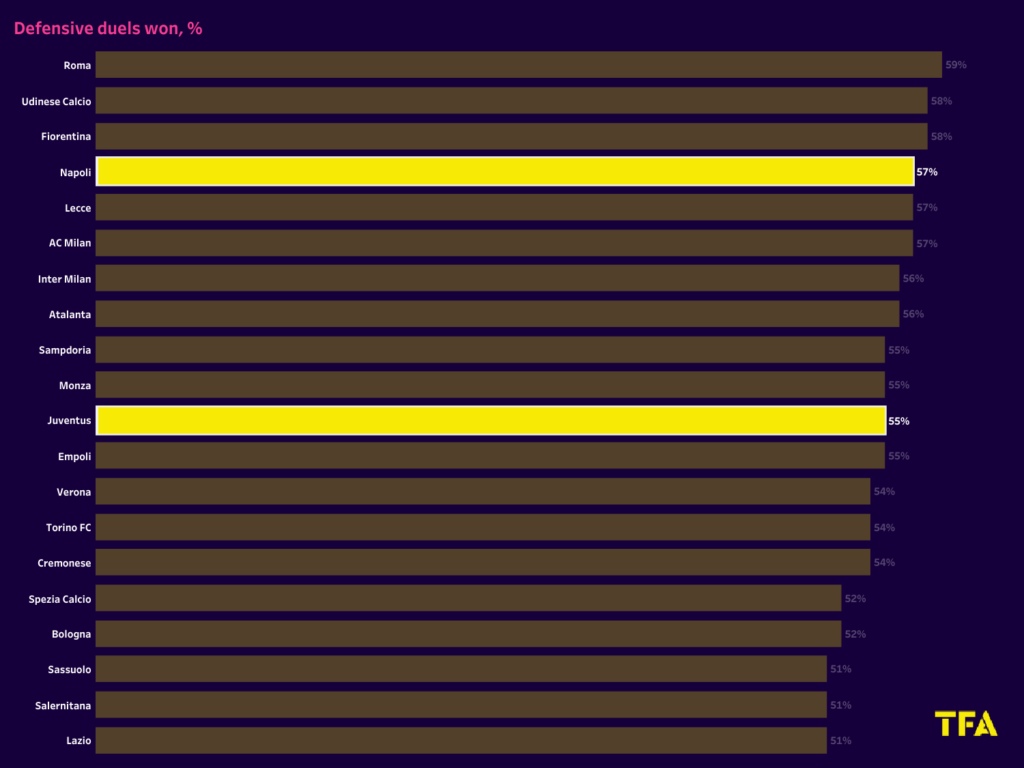 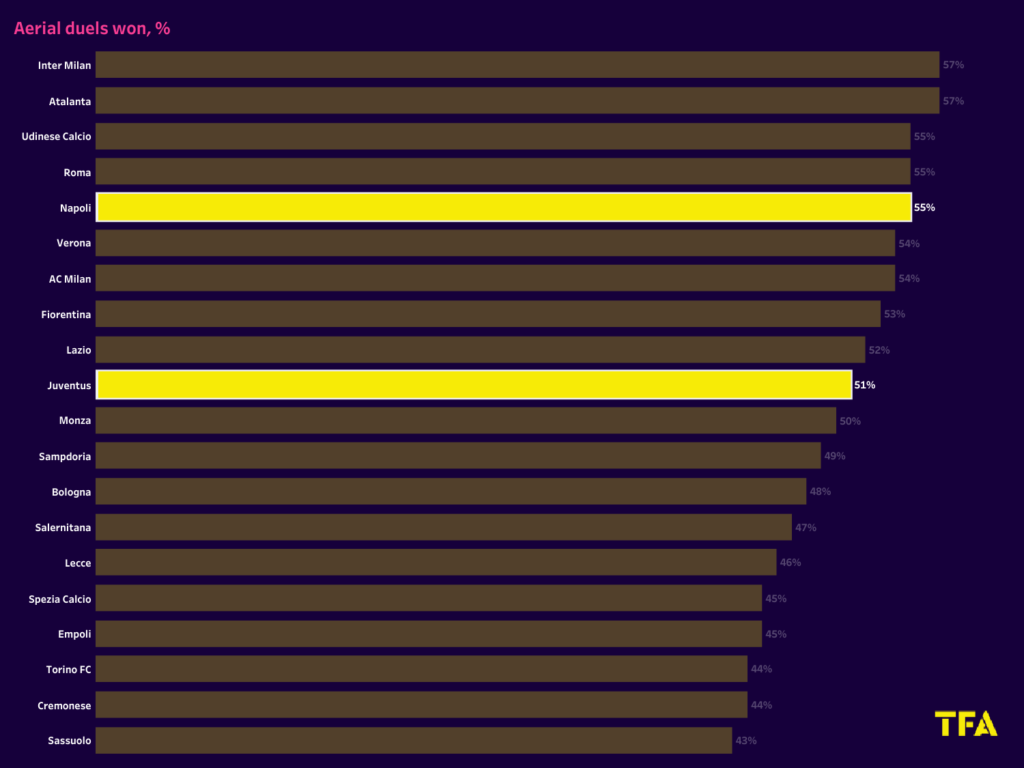 The above chart represents the ranking of teams in Serie A based on their percentage of defensive and aerial duel wins. It can be seen that Napoli are ranked fourth with a 57% win rate in defensive duels won. Juventus, however, are not far behind at 55%. On average, the home team makes 37.35 interceptions versus 40.59 interceptions per 90 for Juventus. Napoli are the superior team in the air, winning 55% of their aerial duels to Juventus’ 51%. 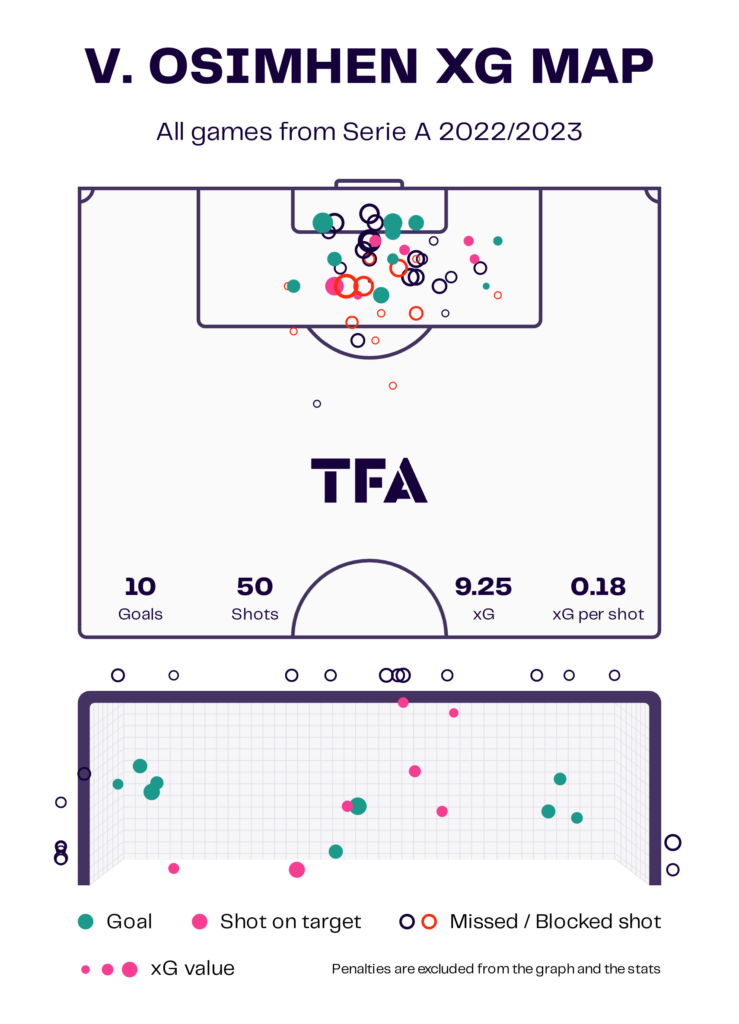 Victor Osimhen has always been an essential player for Napoli. The Nigerian striker has scored ten goals in the league this season and has already reached the double-digit tally. The viz above shows that Victor Osimhen has scored the majority of his goals from inside and around the 6-yard box. Juventus’ defence will have to remain tight and can’t afford to give him space inside the penalty area. He will be the greatest threat from the home side. Osimhen has provided 12 goal contributions in just 13 Serie A appearances this season. 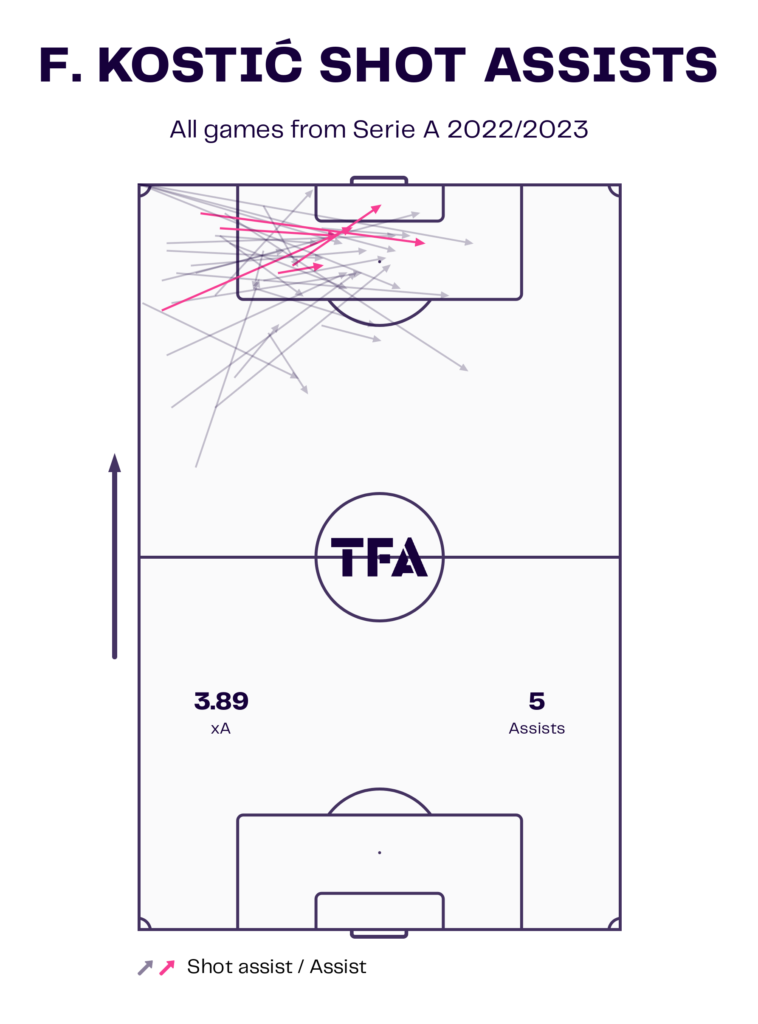 Filip Kostic has been one of the visitors’ best signings of the season on the left wing. He has scored one goal and provided five assists in the current season of Serie A. Napoli’s defence will have to remain tight, and they can’t afford to give him space in the final third. He will be the greatest threat from the visitors. Kostic has provided six goal contributions in 17 Serie A appearances this season.

Juventus will be without their first-choice defenders, Bonucci and Cuadrado; Vlahovic, Di Maria, and Pogba are also ruled out of the game, all of whom are struggling with injuries.

Min-Jae-Kim, who has been out with an injury, could be missed by Napoli in defence. Most Napoli first-team players are fully fit and expected to start with their first-choice line-up.

This will be the most important match of game week 18 as two Serie A heavyweights compete for the Serie A title at Stadio Diego Armando Maradona. Napoli will have the home advantage, but it won’t be easy for them to beat Allegri’s Juventus. Both teams will need a bit of magic in the attack and hope their strikers get on the scoresheet.

Can Napoli finally break the Juventus hold on the Scudetto?

How club record signing Romelu Lukaku will fit in at Inter