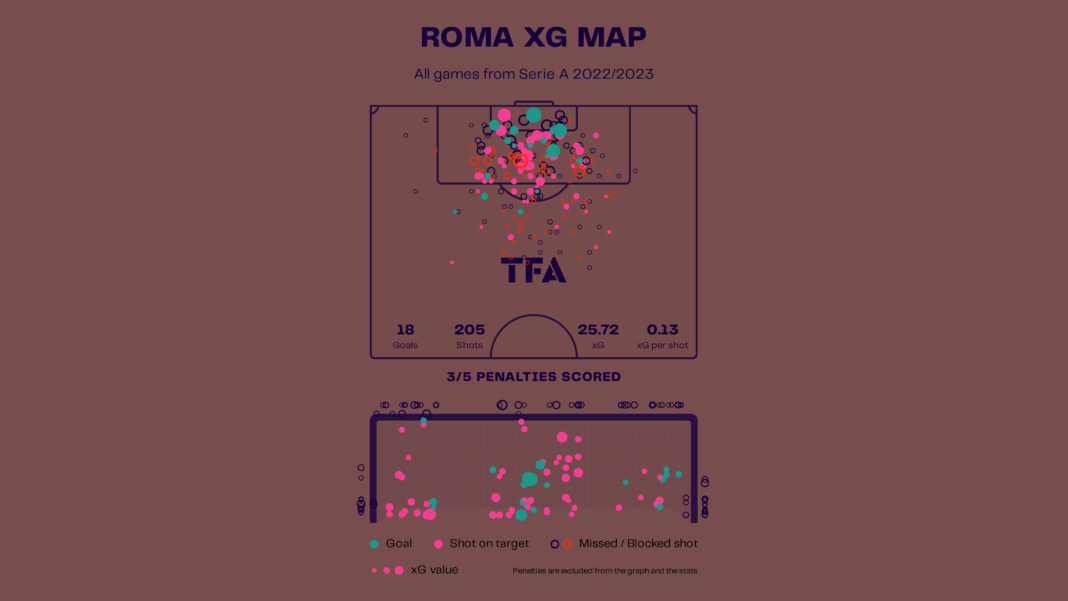 Roma will be looking to get into a winning momentum once again in the Serie A when they face Fiorentina at Stadio Olimpico in game week 18. Roma made a comeback in the last game to draw 2-2 against third-placed Milan. In comparison, Fiorentina won 2-1 against Sassuolo when Nicolas Gonzalez scored the winner during extra time.

Meanwhile, Roma currently sits in seventh place in the Serie A table, three points behind fourth-placed Inter Milan. They remain in contention to qualify for European football next season.

Meanwhile, Fiorentina currently sits ninth in the top-flight standings, 14 points clear of the relegation zone, and seven behind the European positions. They have scored 21 and conceded 22 goals in 17 matches played. 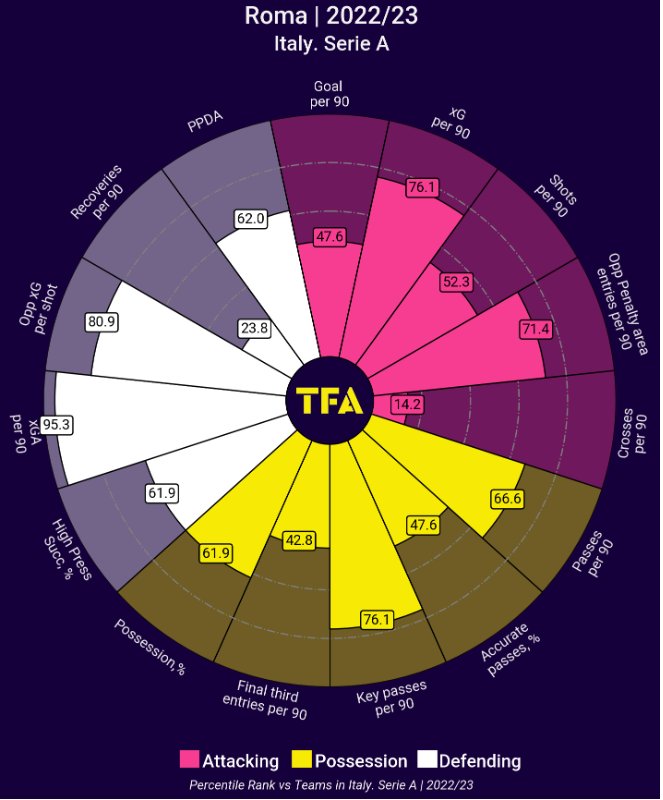 The above viz shows the percentile rank of the home team in comparison to other Serie A teams. Roma have had a mixed start to the Serie A campaign this season. Roma currently sits in seventh place in the Serie A table. Roma have struggled to get a result in their favour against the top Serie A teams. Roma are having difficulty putting up numbers in the charts. We can observe that Roma are ranked very low in the attacking and possession departments. Defensively, they are performing well and have conceded just 16 goals in the current Serie A campaign. 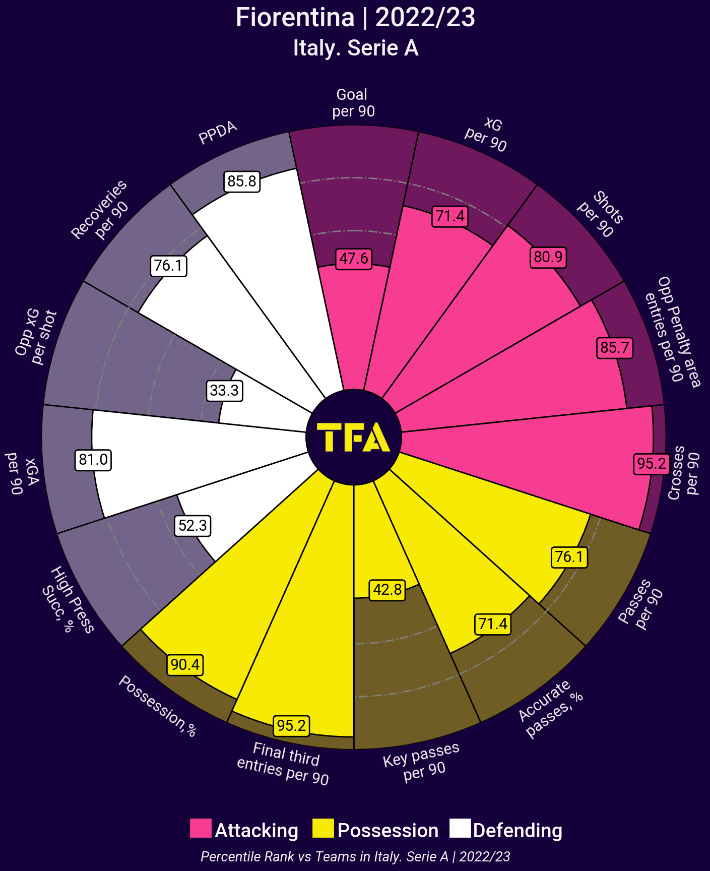 The above viz shows the percentile rank of the away team in comparison to other Serie A teams. Fiorentina have won three, drawn one, and lost one in the last five Serie A games of the current season. In 17 Serie A games this season, Vincenzo Italiano’s side has scored 21 goals and allowed 22. The above viz shows the team’s percentile rank in attacking, defensive, and possession stats compared to other teams in the Italian Serie A. Fiorentina are ranked above average in possession numbers, particularly in the final third entries per 90 and possession percentage. They have also ranked well in crosses per 90 and opponent penalty area entries per 90, indicating a solid start. Another stat in which they have excelled is shots per 90. 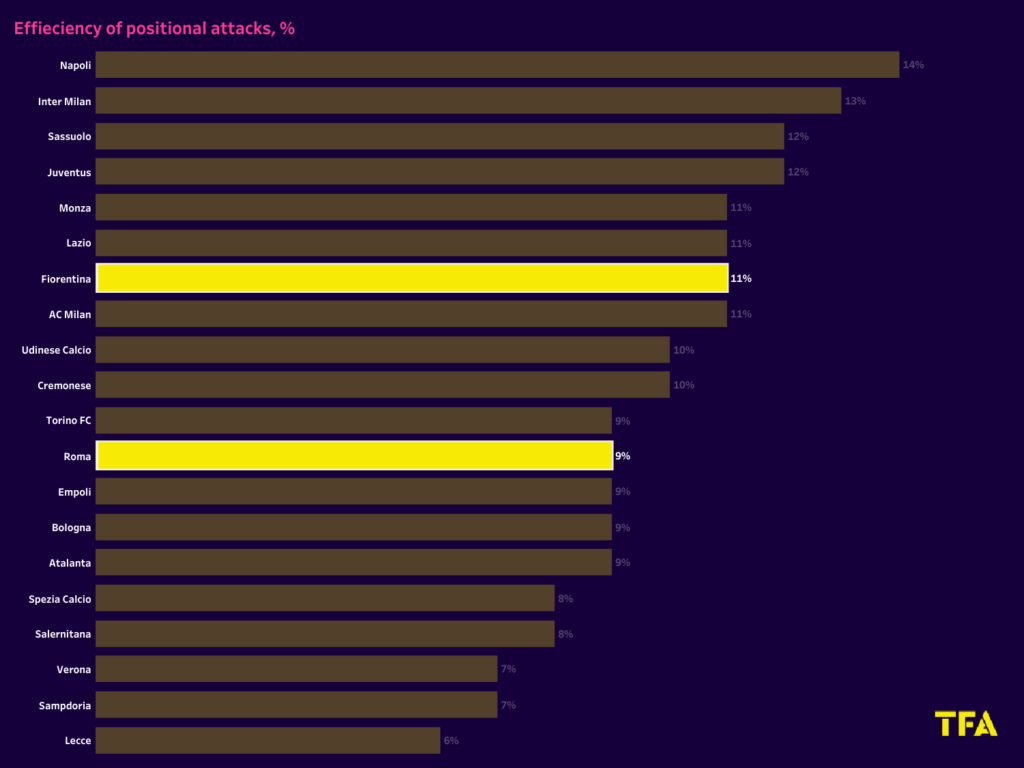 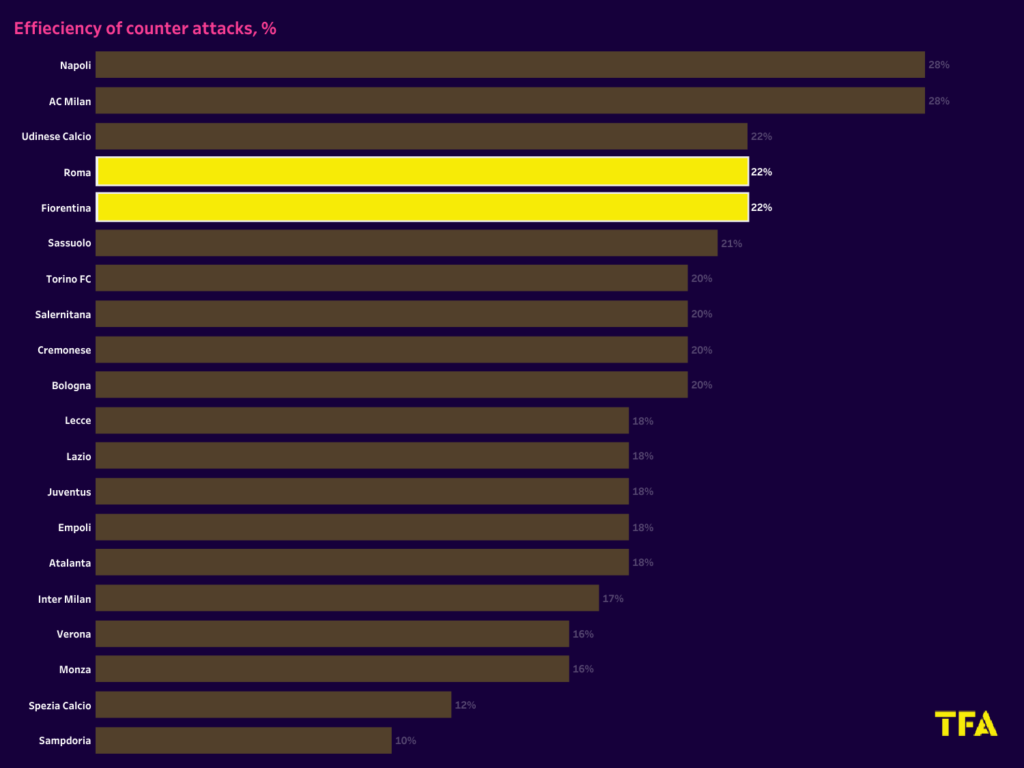 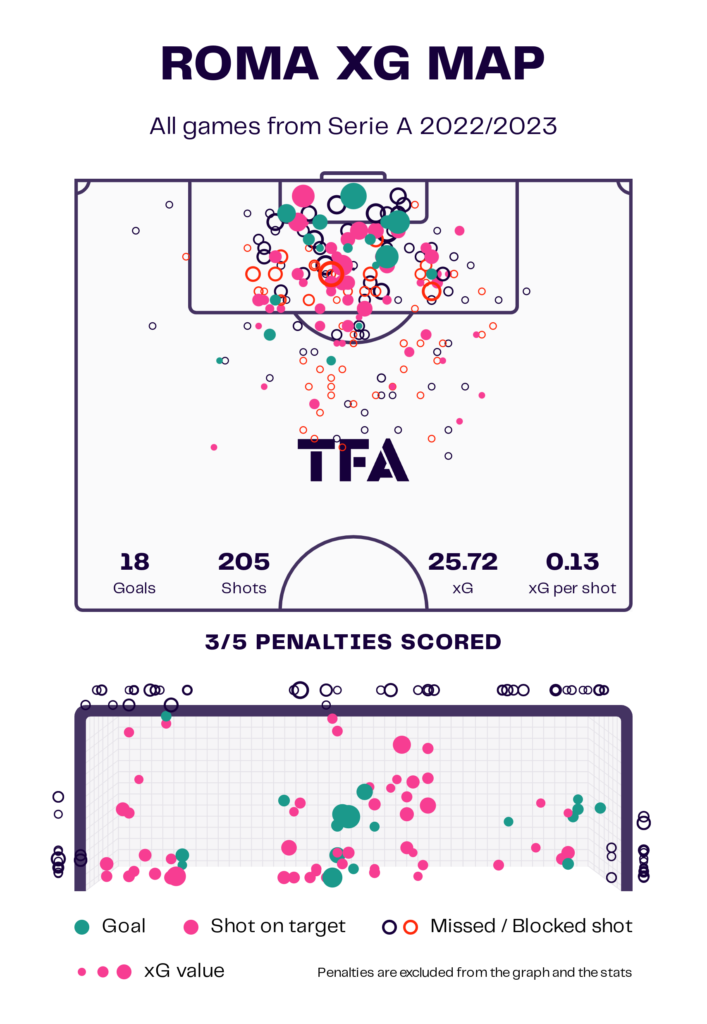 Roma are currently seventh in the 2022-23 Italian Serie A, with 31 points from 17 games played. They have won nine matches, drawn four, and lost four. They have scored 21 goals and conceded 16. We can observe from the above viz that the team has scored most of its goals from inside the box. Roma players have massively underperformed their xG this season. Roma players have missed 50 big chances so far this Serie A campaign. Roma have an xG per 90 of 1.74 and an average of 12.35 shots per 90. 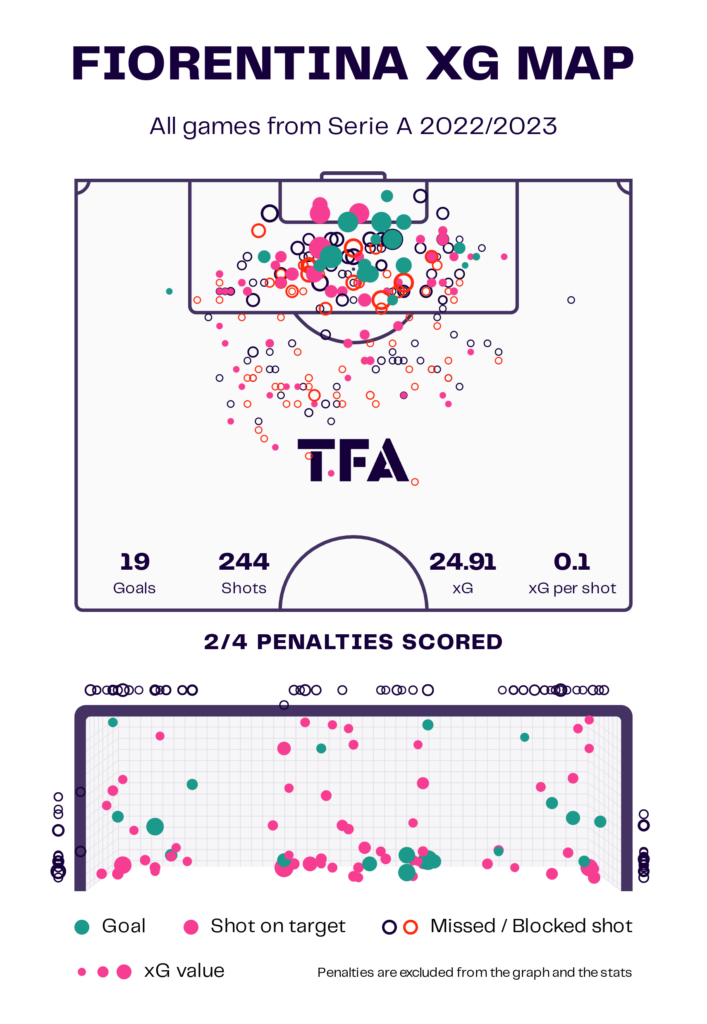 Fiorentina are currently ninth in the 2022–23 Italian Serie A, with 23 points from 17 games played. They have won six matches, drawn five, and lost six. They have scored 21 goals and conceded 22. We can observe from the above viz that the team has scored most of its goals from inside the box. The team has also scored a few goals from outside the box. Fiorentina have a 1.64 xG per 90 and a 14.59 shot per 90 average. Fiorentina players have created 29 big chances and missed 21 big chances in the current Serie A season. 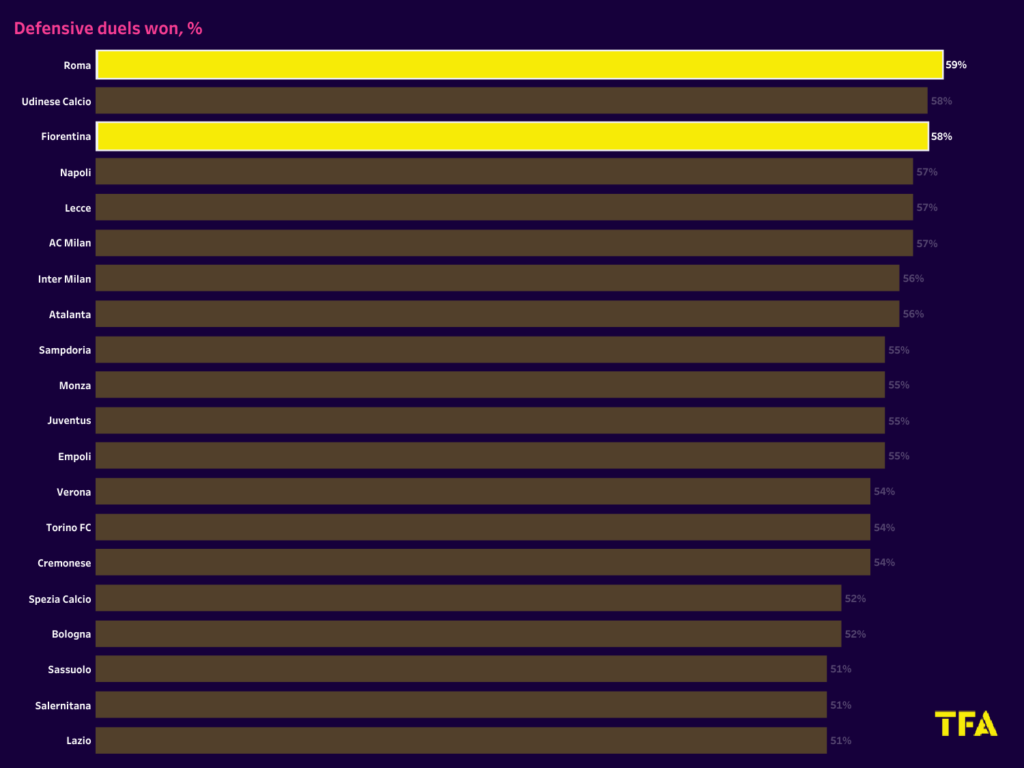 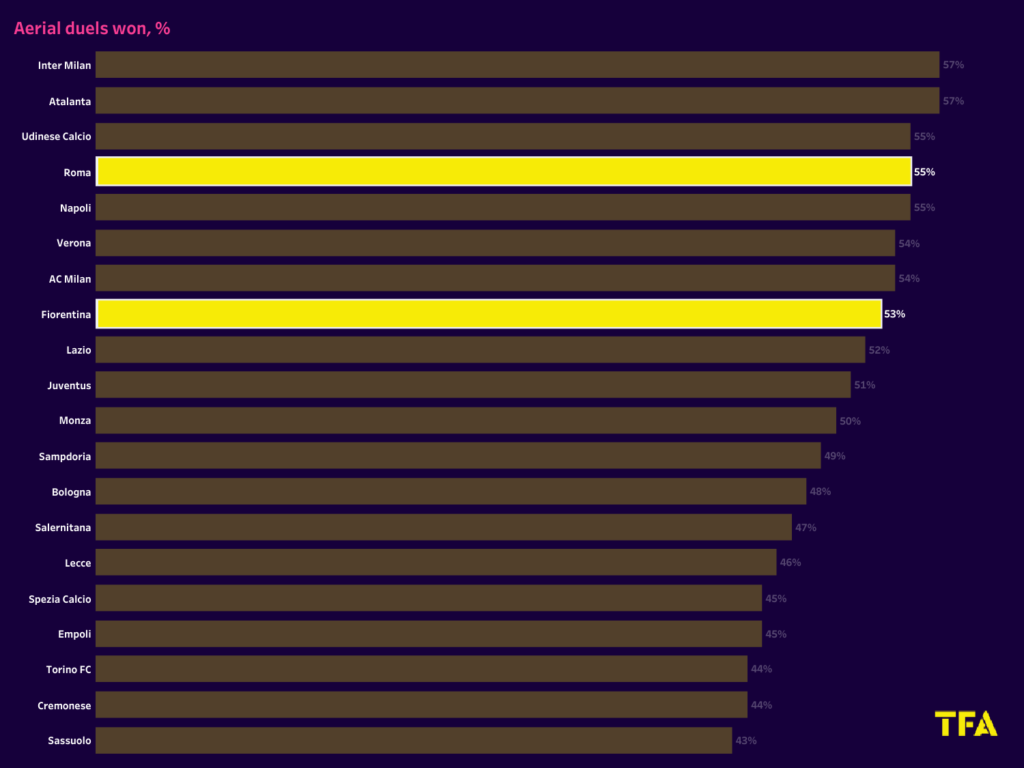 The above chart represents the ranking of teams in Serie A based on their percentage of defensive and aerial duel wins. It can be seen that Roma are ranked first with a 59% win rate in defensive duels. Fiorentina, however, is not far behind at 58%. On average, the home team makes 38.53 interceptions versus 35.24 interceptions per 90 for Fiorentina. Roma are the superior team in the air, winning 55% of their aerial duels to Fiorentina’s 53%. 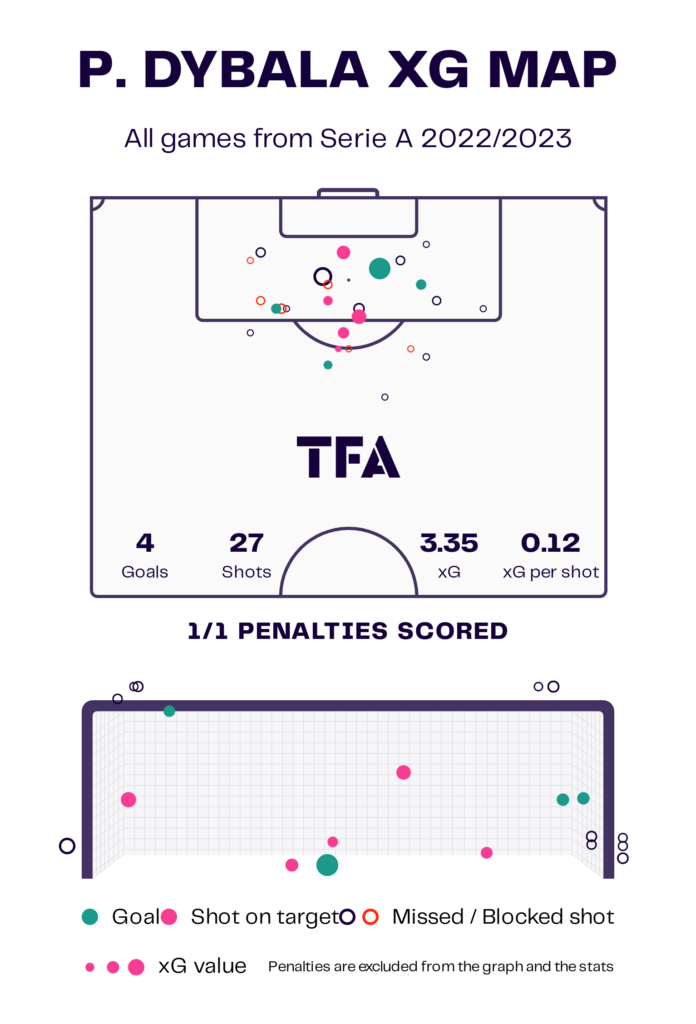 Paulo Dybala is most likely to lead the line for the home side. He has scored five goals and provided two assists in the current season of Serie A. Fiorentina’s defence will have to remain tight, and they can’t afford to give him space in the final third. He will be the greatest threat from the home side. Dybala has provided seven goal contributions in just 11 Serie A appearances this season. 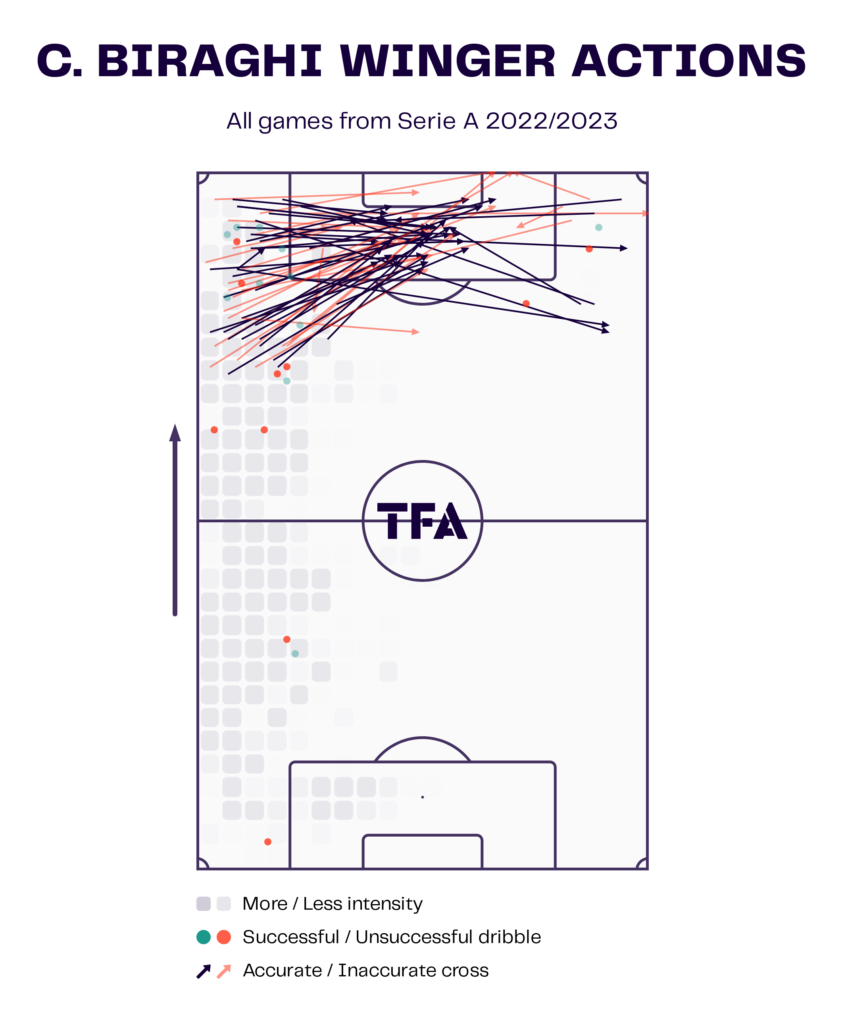 Cristiano Biraghi plays like a modern attacking full-back who crosses the ball into the 18-yard box and provides goal-scoring chances for the attackers whenever possible. Biraghi has been impressive for Fiorentina’s defence as a left-back. He has provided two crucial assists for his teammates in his 16 Serie A appearances. He makes 3.44 key passes per 90 minutes, which creates key scoring chances for his Fiorentina teammates. Biraghi leads the chart for the most key passes in the current Serie A season and has made 50 key passes. He will be the greatest threat from the visitors because of his playmaking ability.

Jose Mourinho and his Roma side have been lucky with the injuries. Most Roma first-team players are fully fit and expected to start with their first-choice line-up. Ibanez will miss the game as he serves his suspension.

Most Fiorentina first-team players are fully fit and expected to start with their first-choice line-up.

This might be Game Week 18’s most interesting match as two teams, one fighting for a top-four position and another fighting for a top-half finish in the Serie A, go head-to-head at the Stadio Olimpico. Roma will have the home advantage, but it won’t be easy for them to beat Italy’s Fiorentina. Both teams will need a bit of magic in the attack and hope their strikers get on the scoresheet.

Must back himself up: Ronaldo leaving Juventus would be a result...

How might the Champions League group stages unfold for the Serie...