Home Analysis Transfer Analysis: Why are Napoli eying a surprise move for Serie B... 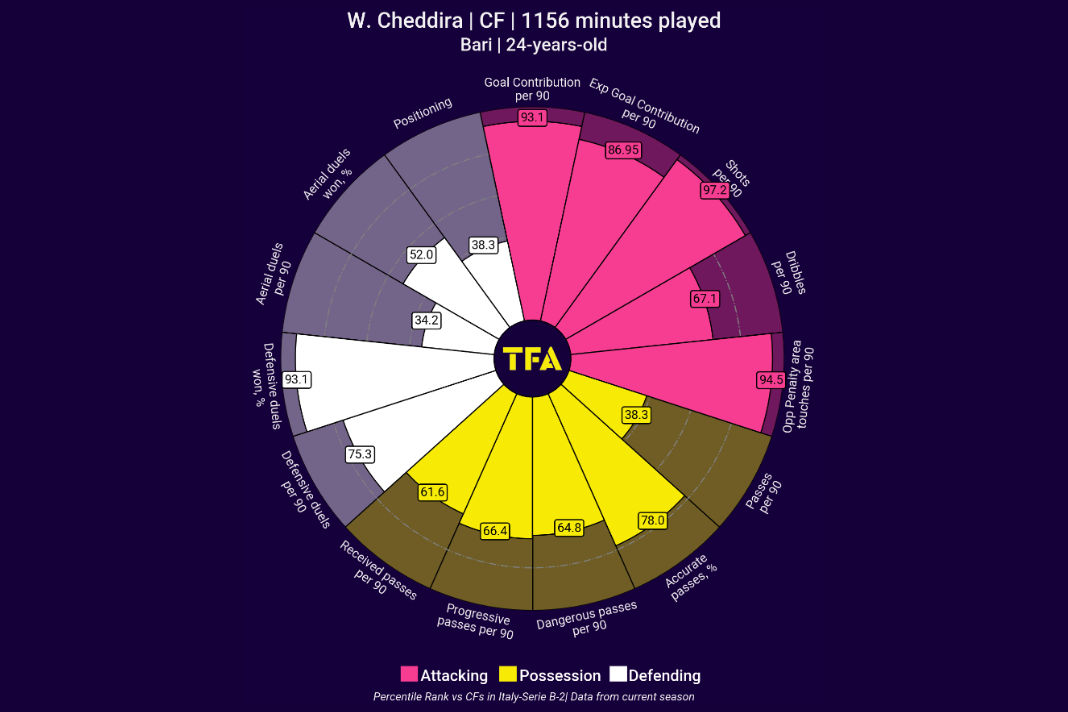 One player who has been a significant performer for Bari in the Italian Serie B is 24-year-old Moroccan forward Walid Cheddira. Bari have been impressive in Serie B due to the forward who has been shining for them and performing like a superstar. Walid Cheddira was part of the Moroccan squad, which recently finished fourth in the 2022 Qatar World Cup. The Moroccan forward has been an essential player for the impressive Bari side, scoring ten goals and providing four assists in 13 appearances in Serie B. Few Serie A sides, including Napoli, Torino, and Lazio, are interested in signing the forward in the recent winter transfer window. We will now look at some stats that show why Serie A club Napoli wants to sign the forward. 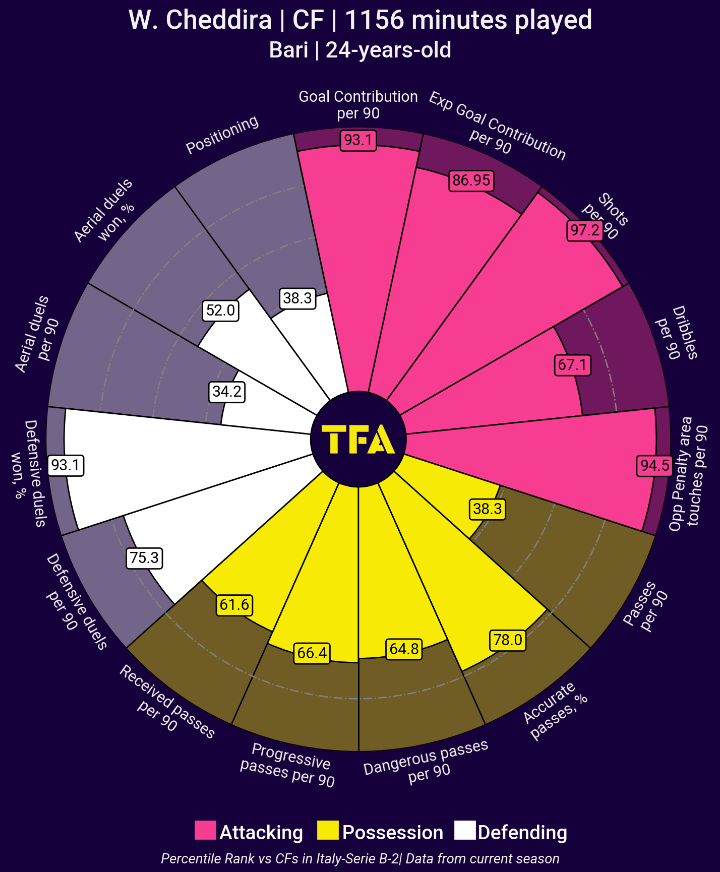 Walid Cheddira has been an integral part of the Bari side. The 24-year-old Moroccan forward has scored ten goals and provided four assists in the Italian Serie B this campaign. The above viz shows the stats of the player in comparison to the other players featured as centre forwards in Serie B this season. It can be observed that Cheddira has dominated the shots per 90 stat. Other stats where Cheddira has done well are goal contribution per 90, opponent penalty area touches per 90, expected goal contribution per 90, and defensive duels won (%).

Cheddira in front of Goal 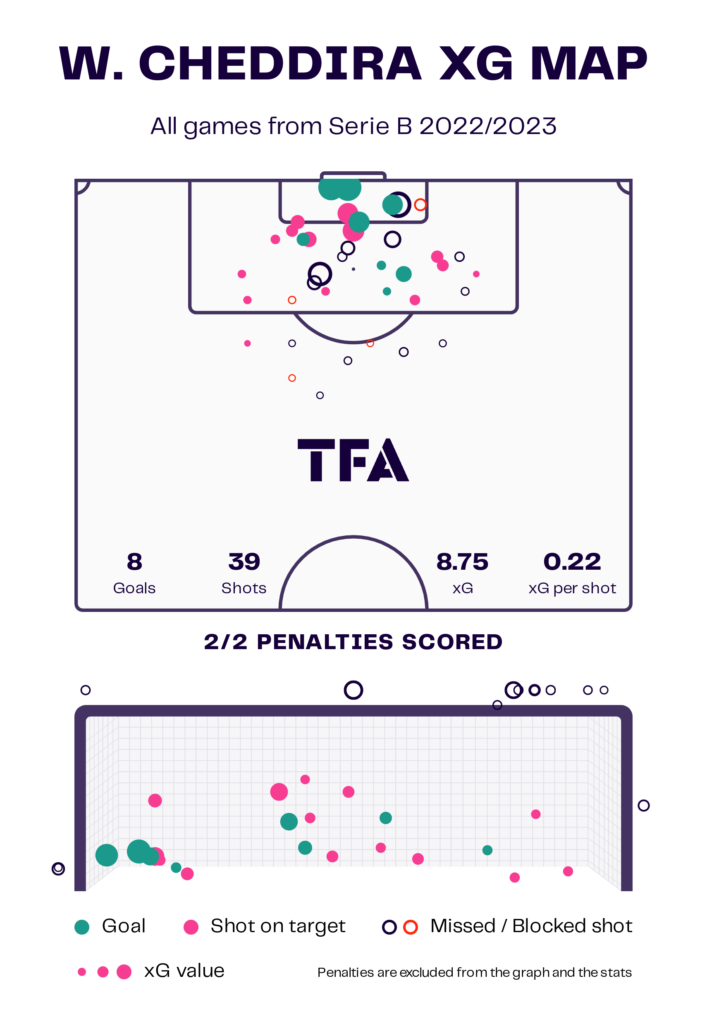 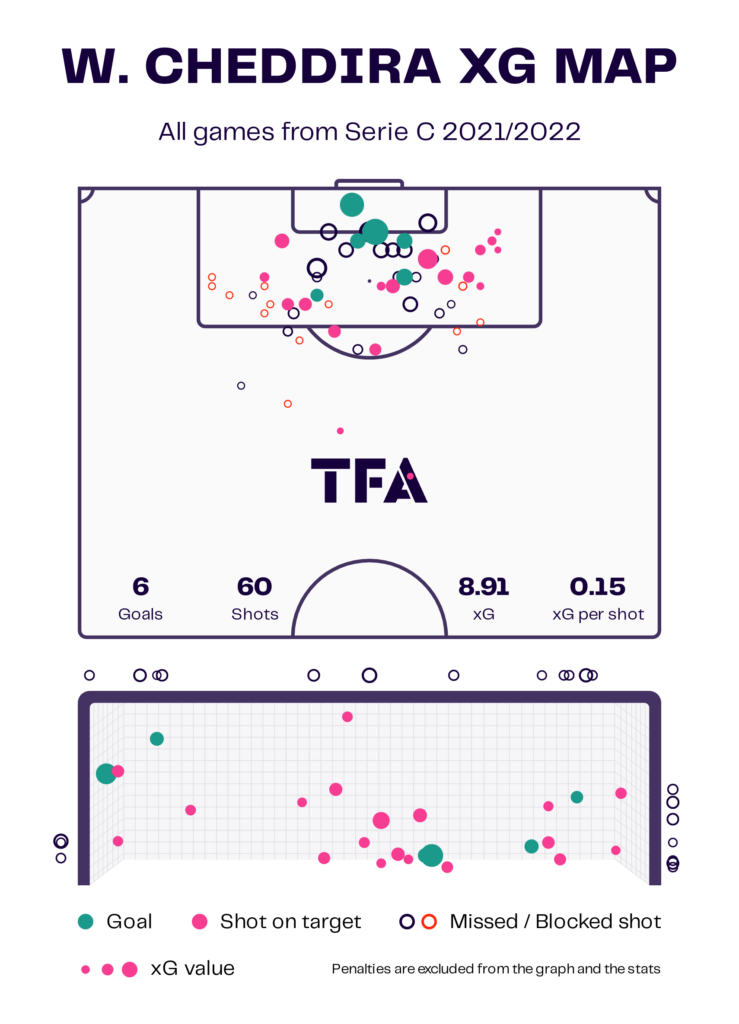 The above viz shows the shot map of the forward in the Italian Serie C. Walid Cheddira scored six goals and provided two assists for the Bari side in the 2021–22 Italian Serie C season. Cheddira had a total non-penalty xG of 8.91 last season. He had taken 60 shots in the 34 Serie C games and had a shooting accuracy rate of 41.7%. He scored a goal after every ten shots he took and had 2.36 shot attempts per 90 minutes. He has already broken the record of six goals he scored last season, scoring ten times this season. 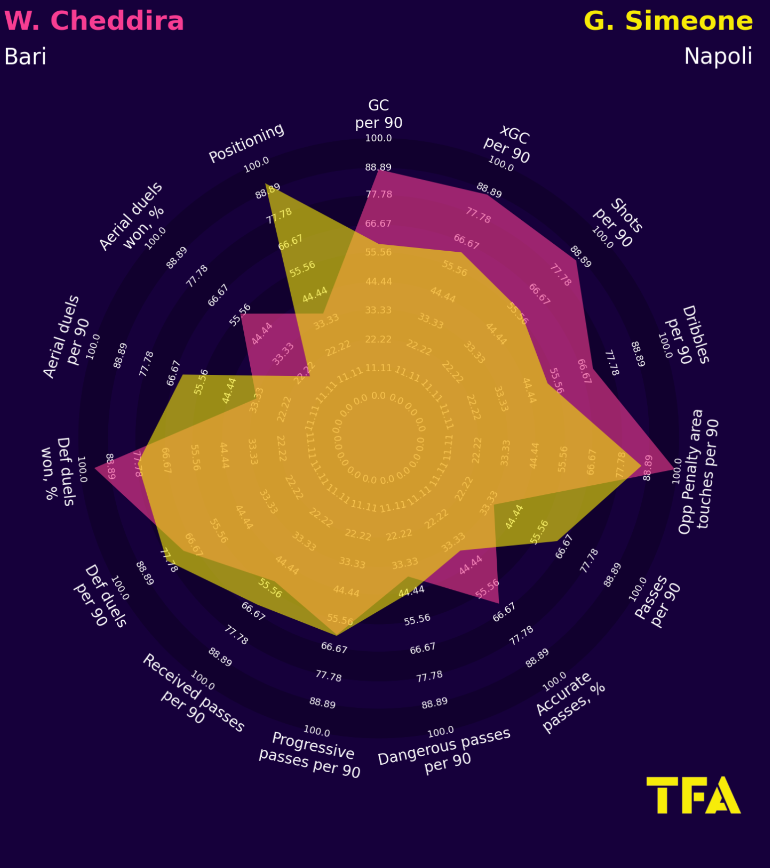 When Napoli needs to rest Victor Osimhen, Walid Cheddira could step in for the 27-year-old Argentine forward Giovanni Simeone as a squad player and starter. Both players outperform each other in a few stats. In the following categories, Cheddira outperforms Simeone: accurate passes (%), opponent penalty area touches per 90, shots per 90, expected goal contributions per 90, and goal contribution for 90. Cheddira is a forward that provides a different attacking dimension to this Napoli side that might force Napoli to play him ahead of Simeone if he moves to Roma. Simeone has made nine Serie A appearances and scored only two goals this season. Cheddira has been the talisman for his Bari side, scoring ten goals and providing four assists in his 13 Serie B appearances this season.

Napoli have always placed faith in their scouting system, signing young prospects and talent with high potential who could go on to become superstars in the making. Cheddira will add much-needed attacking depth to Napoli’s current lineup. He can also be a good rotation option as a backup for Nigerian forward Osimhen, who gets injured often, so the signing of Cheddira makes sense from Napoli’s perspective.

‘Covering the whole field’- How Pioli is improving Calhanoglu at AC...

A real gem: This 22-year-old is proving to be indispensable for...