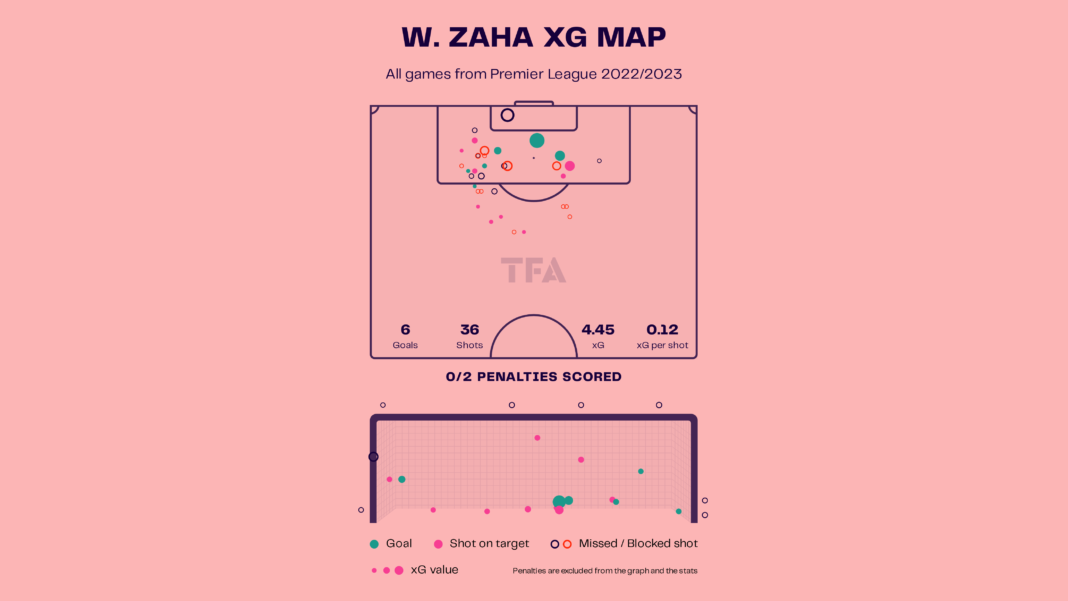 One player who has been impressive for Crystal Palace over the last half of the dozen seasons is the 30 years old Ivory Coast Forward Wilfried Zaha. He has been the talisman for the struggling Crystal Palace side. Zaha has been influential for Crystal Palace this season, scoring six goals and providing two crucial assists for his side in 16 appearances. The Ivory Coast international might finally get his well-deserved move to the big European club on a free transfer this summer. The forward has been linked with a move to various European clubs, such as Barcelona, Roma, and Juventus. We will now look at some stats that show why Serie A club Roma wants to sign the forward. 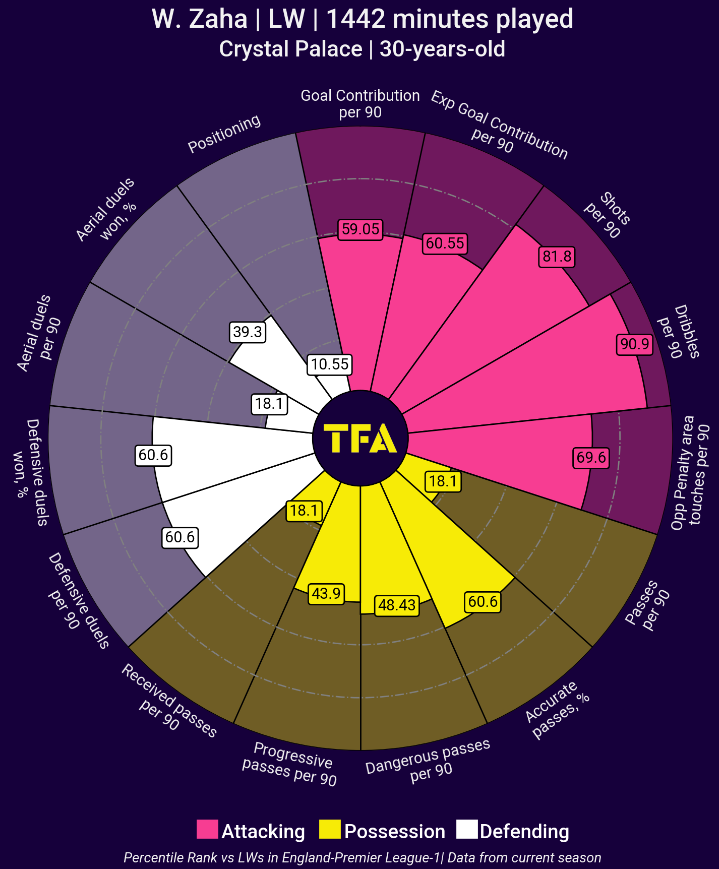 Wilfried Zaha has been an integral part of the Crystal Palace side. The 30-year-old Ivory Coast forward has scored six goals and provided two assists in the English Premier League this campaign. The above viz shows the stats of the player in comparison to the other players featured as left-wingers in the English Premier League this season. It can be observed that Zaha has dominated the dribbles per 90 stat. Other stats where Zaha has done well are shots per 90, opponent penalty area touches per 90, and expected goal contribution per 90. 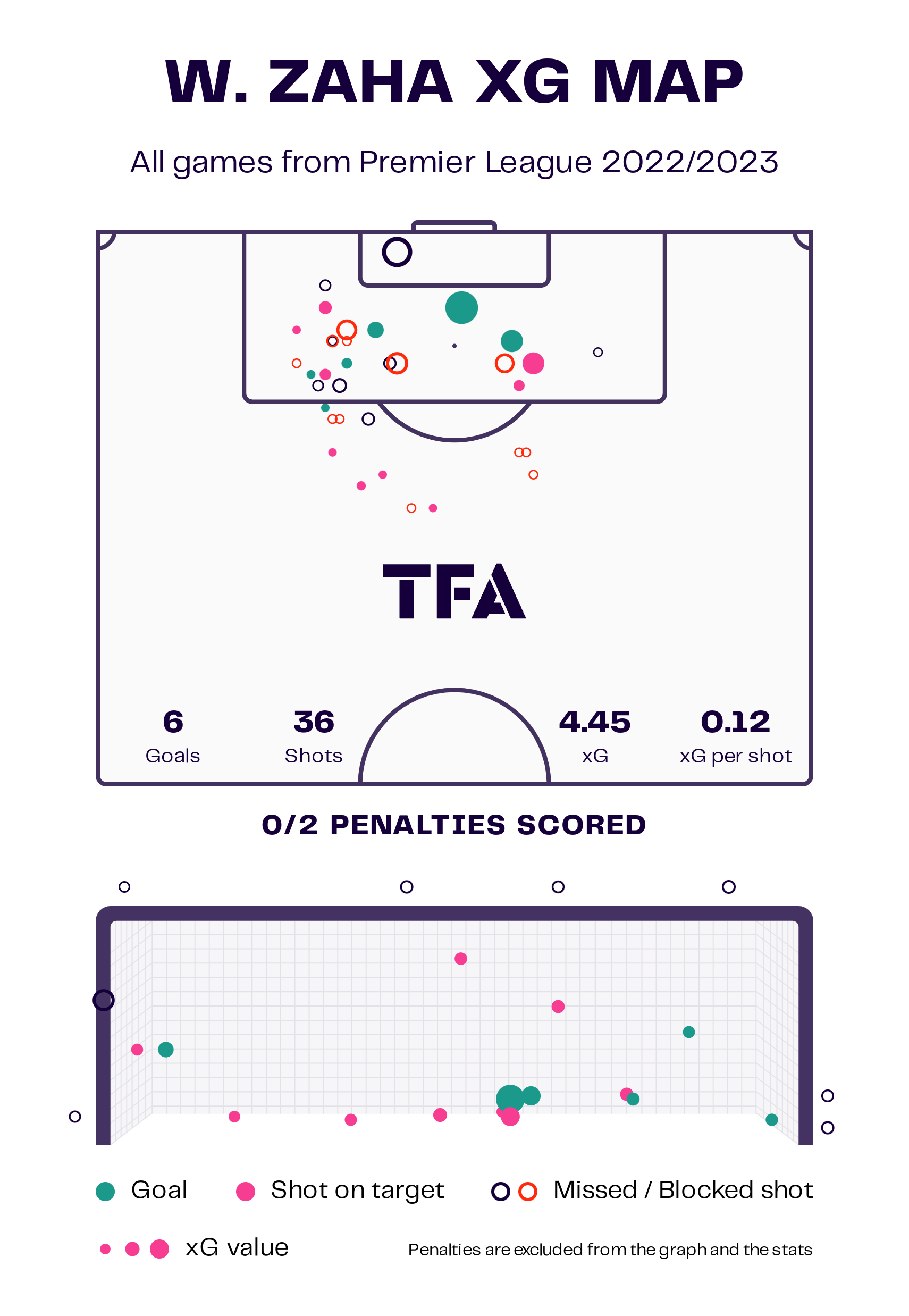 The above viz shows the shot map of the forwards in the English Premier League this season. Zaha has added six goals to the Crystal Palace side in the English Premier League, averaging 2.23 shots per 90 minutes. Like a proper forward, Zaha has taken most of the shots from inside the box. He has taken 38 shots so far this season. Out of the 38 shots, 16 were on target and the rest off target. Zaha has a shooting accuracy rate of 42.1%, and his total xG per shot is 0.12. Zaha’s goal score per 90 minutes is 0.35. 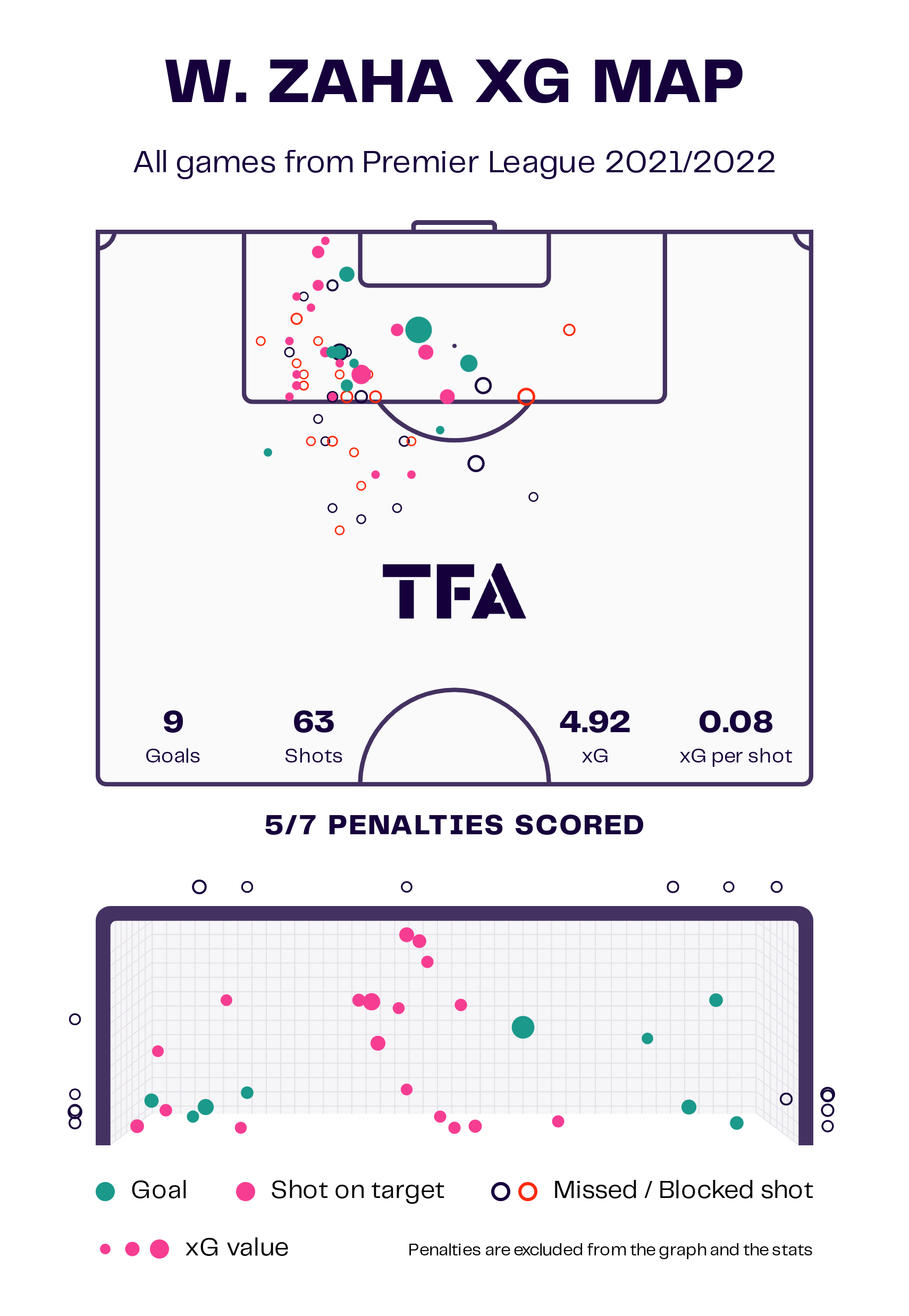 Wilfried Zaha scored 14 goals and provided two assists for the Crystal Palace side in the 2021–22 English Premier League season. His goal involvement per 90 minutes was 0.49. Zaha had a non-penalty xG per 90 minutes of 0.16 and a total non-penalty xG of 4.92 last season. He had taken 70 shots in the 33 Premier League games and had a shooting accuracy rate of 47.1%. He scored a goal after every five shots he took and had 2.12 shot attempts per 90 minutes. He is on course to break the record of 14 goals he scored last season, already scoring six times this season. 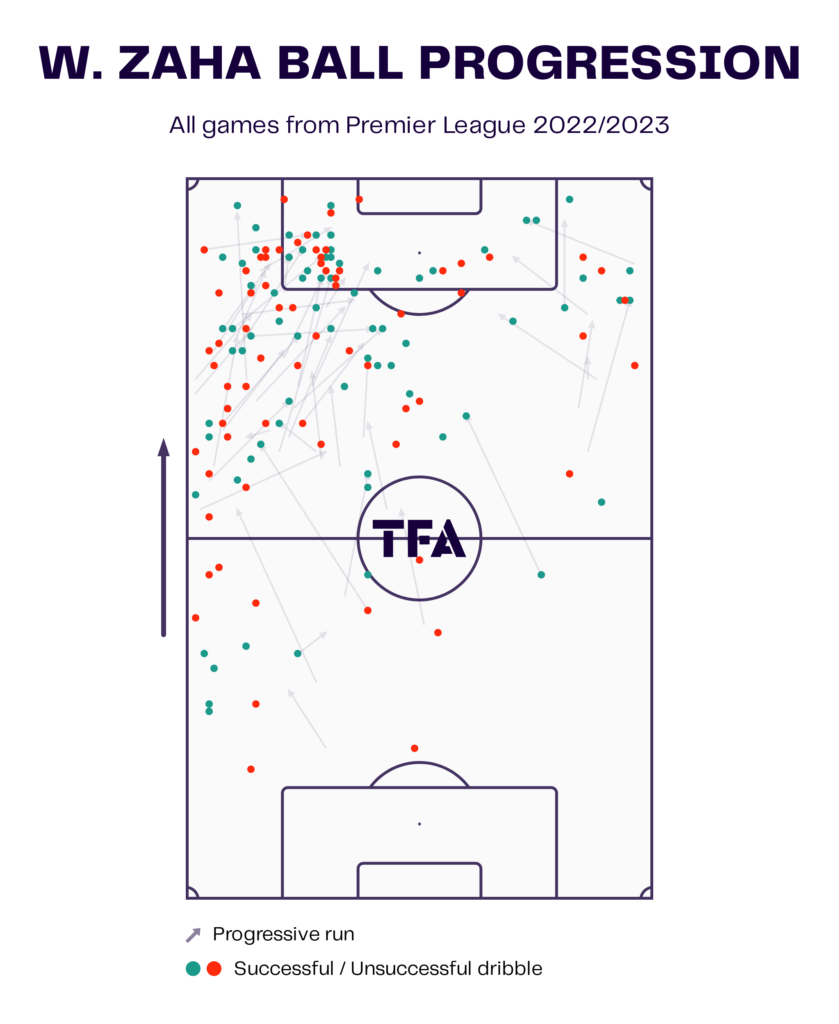 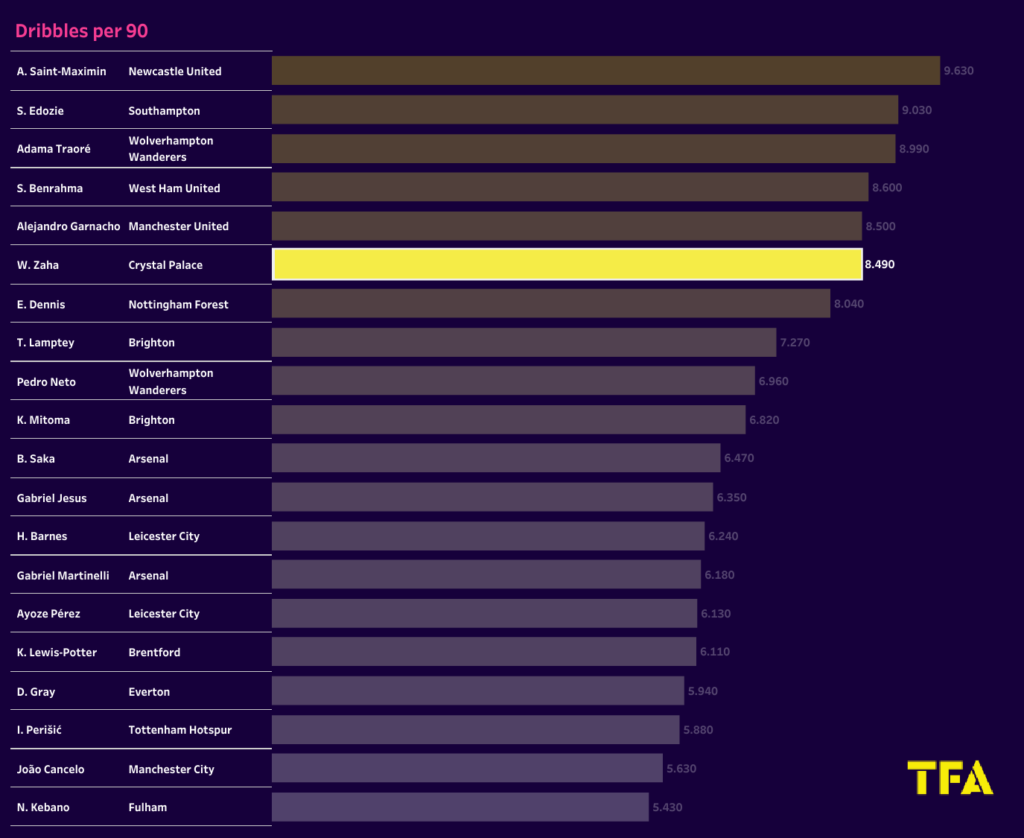 Wilfried Zaha has always been a forward who likes to run at the opposition’s defence and trouble them with his pace, creativity, and skill. Zaha has good dribbling skills that have tormented the Premier League defences for years. Zaha has attempted a total of 144 dribbles and successfully completed more than 50% of the dribbles. Zaha makes 8.49 dribbles per 90 minutes.

Whom would Zaha replace? 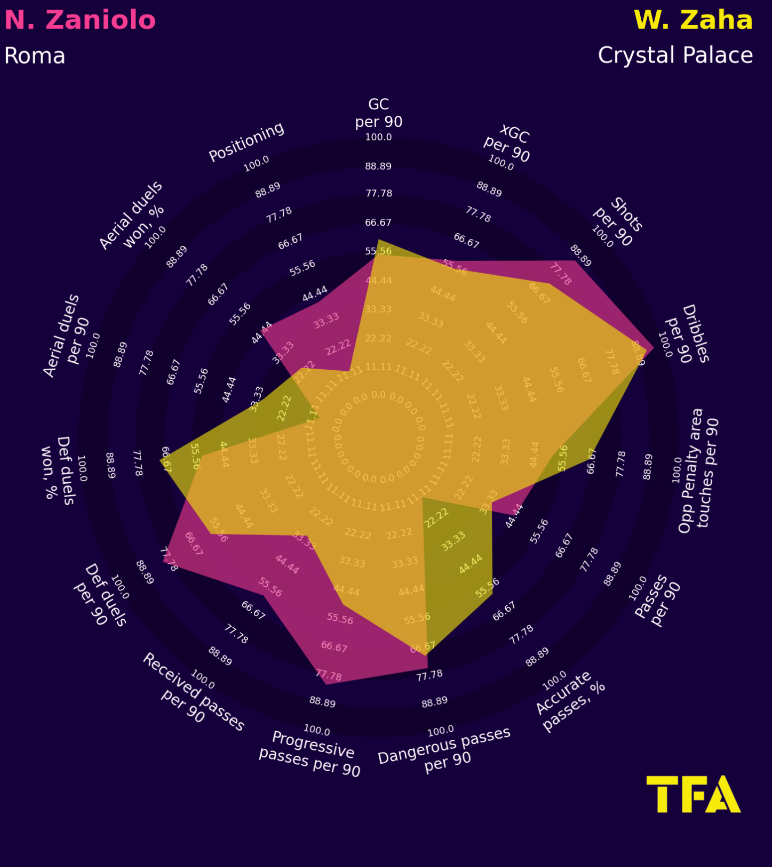 Wilfried Zaha might replace the 23 years old Italian forward Nicolo Zaniolo as a squad player and a starting position for Roma’s attack. Both players outperform each other in a few stats. Zaha outperforms Zaniolo in accurate passes (%), opponent penalty area touches per 90, and defensive duels won (%). Zaha is an experienced forward and provides a different attacking dimension to this Roma side that might force Roma to play him ahead of Zaniolo if he moves to Roma. Zaniolo has made 13 Serie A appearances and scored only one goal this season. Zaha has been the talisman for his Crystal Palace side, scoring six goals and providing two assists in his 16 Premier League appearances this season.

Jose Mourinho is a manager who has always trusted experienced players, and his teams have always achieved success because of his trust in the senior players. Zaha is a player that fits perfectly into the current Roma side because of his pace, dribbling, and playmaking skills as a forward. Zaha will provide the much-needed attacking depth required in the current Roma side as he can play as a striker, central attacking midfielder, or winger on either flank. He can also be a good backup for the rotation of the attacking duo of Dybala and Tammy, so the signing of Zaha makes sense from Roma’s perspective.

Could we see a return to the glory days of Serie...