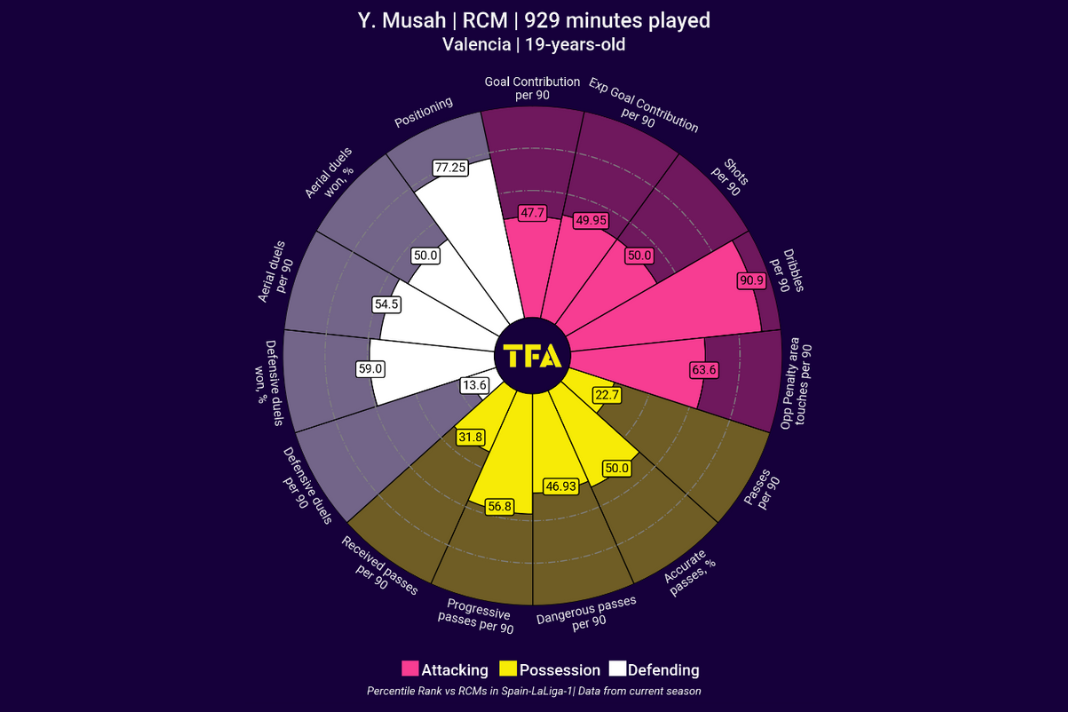 One player who has been a significant performer for Valencia in La Liga is 20-year-old American midfielder Yunus Musah. The wonderkid is performing like a future star in the making and has impressed the scouts of various big European clubs with his performance this season in La Liga and the 2022 Qatar World Cup. Musah recently became the youngest USMNT World Cup starter. During the Qatar World Cup, Musah showed off a lot of his talent with his possession, passing, and defensive qualities. The American midfielder has been linked with a move to Inter Milan, Liverpool, Arsenal, and Chelsea ahead of the winter transfer window. Serie A side Inter Milan will look to sign the midfielder and here are some of the stats that show why the Italian giants are looking to sign him. 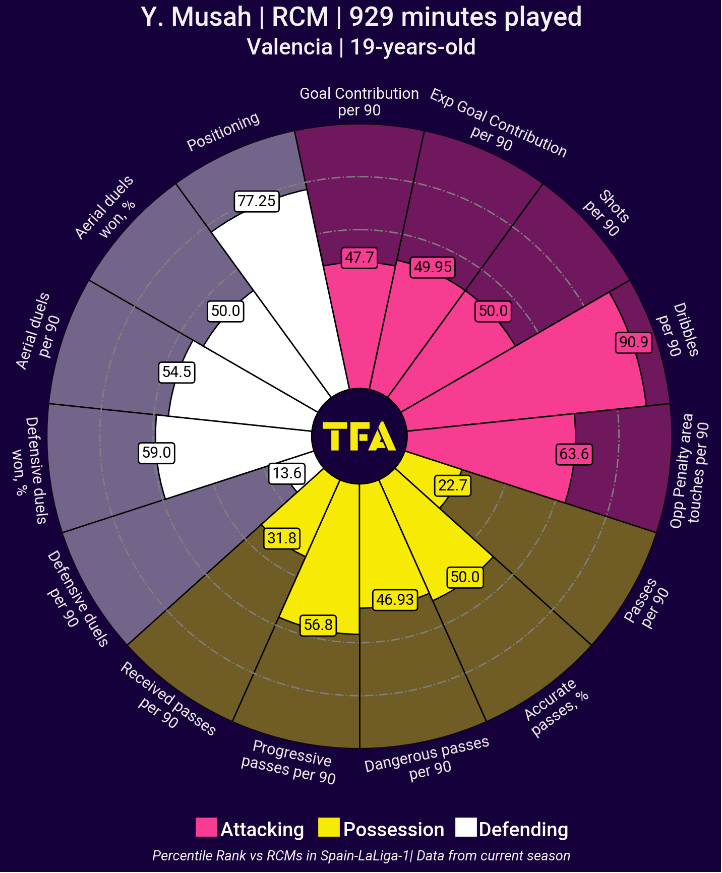 Yunus Musah primarily operates as a right central midfielder from the right side of the central midfield. The above viz shows the stats of the player in comparison to the other players featured as right-central midfielders in La Liga. Musah clearly outperforms in terms of dribbles per 90 stats. Other statistics in which he excels include positioning, opponent penalty area touches per 90, progressive passes per 90, and defensive duels won%. 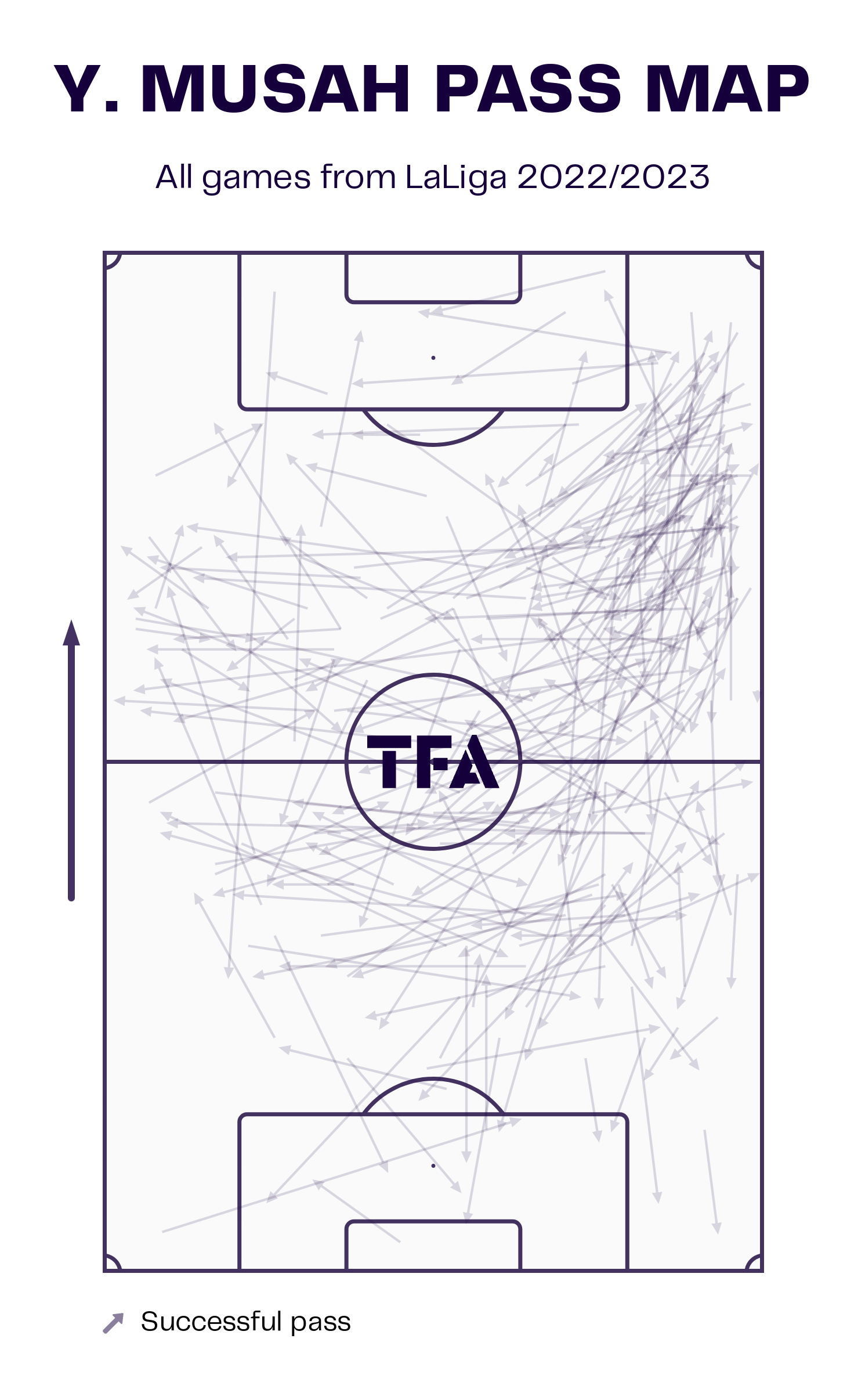 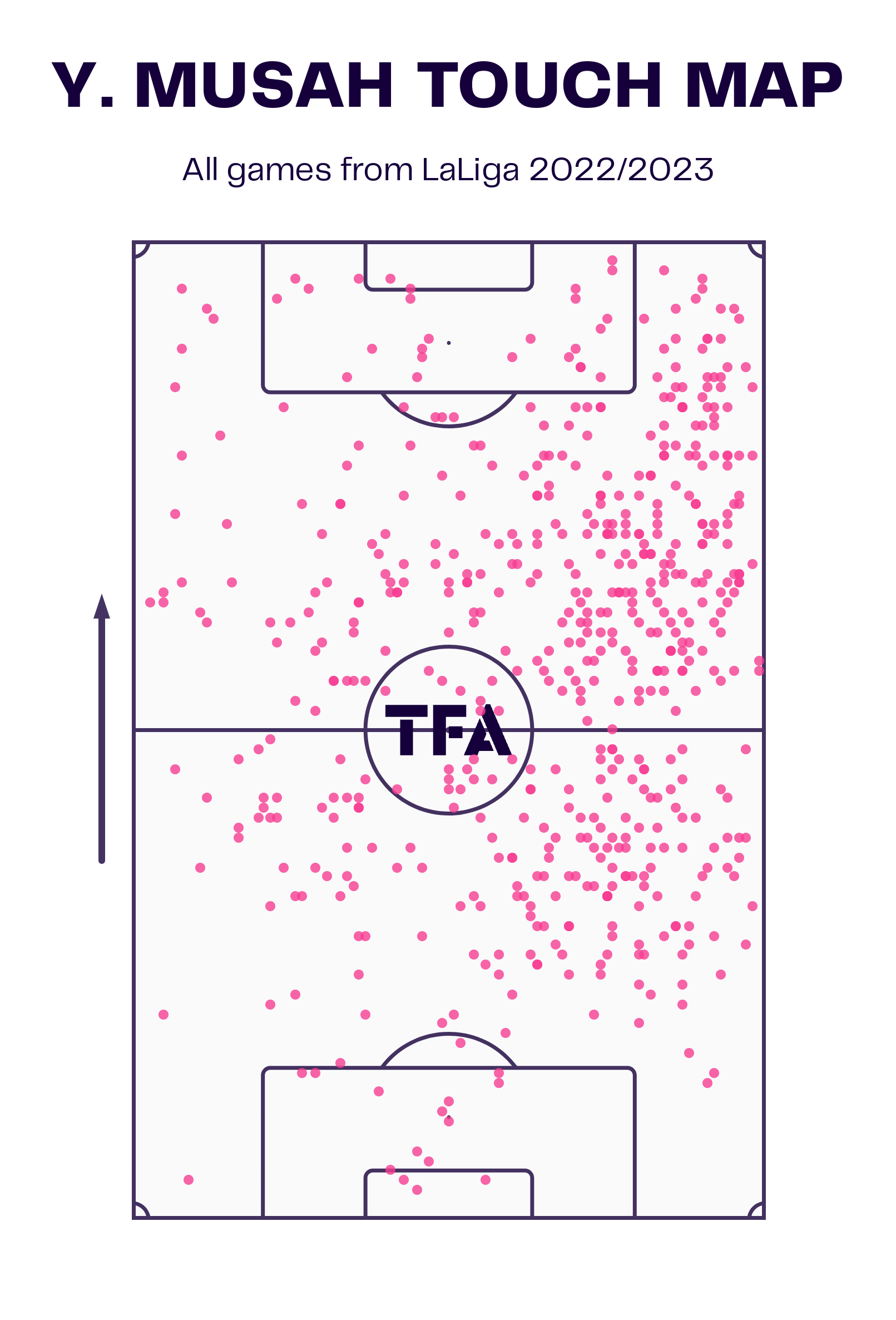 Yunus Musah has the Valencia side by providing creativity and a goal threat from midfield. The American has provided his teammates with two assists in 11 La Liga appearances. He has 0.19 assists per 90 minutes in the league. Musah makes 2.42 progressive runs per 90 minutes. During the Qatar World Cup, he made 2.61 progressive runs per 90 and provided 0.71 shot assists per 90. Musah has created three big chances in the current La Liga season. 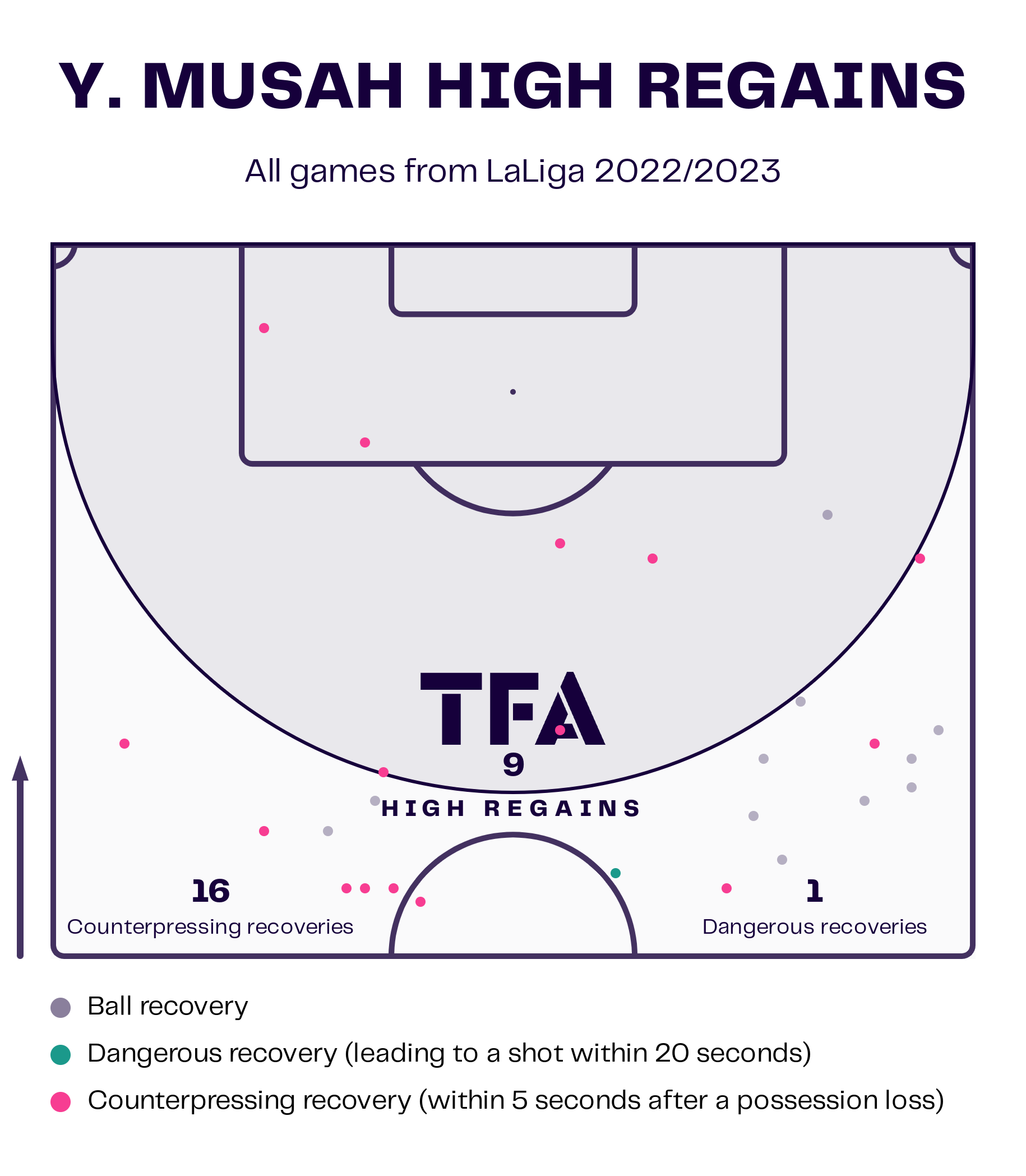 Yunus Musah has worked hard to recover the ball for Valencia in dangerous areas. This season, Musah has managed nine regains in the final third. One of these nine recoveries has been dangerous and led to a shooting within the next 20 seconds of the recovery. The American midfielder has made 16 counter-pressing recoveries in La Liga. This season, he has attempted 52 recoveries from Valencia’s midfield.

Whom would Musah replace? 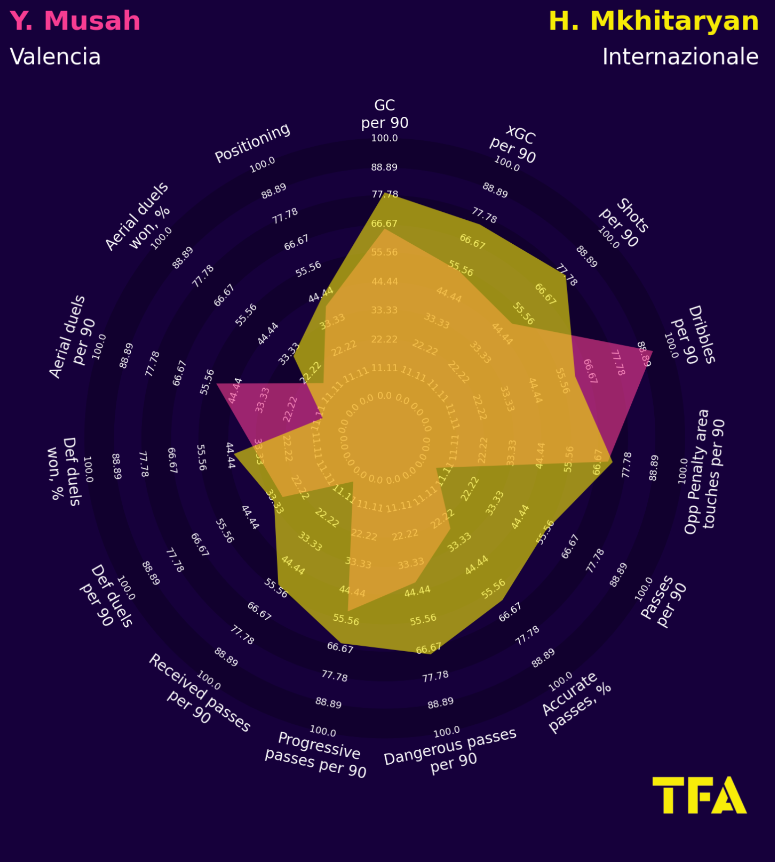 Inter Milan are a side that has always signed players with massive potential and who might become superstars. Yunus Musah is a player that fits perfectly into the Inter Milan side as he is a wonderkid with enormous potential as a central midfielder. Musah will provide the much-needed midfield depth required in the current Inter Milan side and can also offer some creativity from the midfield. He can be a good backup for the midfield duo of Nicolo Barella and Hakan Calhanoglu, so the signing of Musah makes sense from Inter Milan’s perspective; still, the transfer should not cost more than 20 million euros.

Transfer Analysis: Would a Dumfries-Tomiyasu swap deal work for Inter?

The Data Zone: Fiorentina win 2-1 away against Atalanta